Dhaka’s street cleaners, many of them Dalits, keep the city clean at the risk of getting infected and face discrimination as a result of their caste identity.

Garment workers return from a workplace as factories reopened after the government has eased the restrictions amid concerns over the coronavirus disease (COVID-19) outbreak in Dhaka, Bangladesh, May 4, 2020. Photo: Reuters/Mohammad Ponir Hossain/File Photo

Bangladesh confirmed its first case of COVID-19 on March 8 2020. In the span of a little over a hundred days, the number of positive cases crossed the 100,000 mark with more than 1,300 dead.

The country imposed a nationwide lockdown on March 26 and extended it several times. As the lockdown was lifted on May 31, the number of cases began to surge. Yet, Bangladesh’s testing rate has been cut despite the rise in fatalities, with just 13,500 fresh tests conducted by July 10.

Bangladesh’s mayors have been asked to transition to zone-based lockdowns, with those identified as red zones given a public holiday and asked to curtail non-essential movement, though the decision is yet to be implemented. Within Dhaka, 60 COVID-19 confirmed cases per 100,000 people would qualify as a red zone; everywhere else, red zones will be declared for 10 confirmed cases per 100,000 people.

In this atmosphere of uncertainty, Dhaka’s street cleaners are among those most at risk of contracting COVID-19, as many of them continue to work without adequate safety gear.

Air Commodore Badrul Amin, Dhaka South City Corporation’s (DSCC) chief waste management officer, said it had provided masks and gloves to all 5,400 of their employees and would be distributing Personal Protective Equipment (PPE) to them soon, according to a report by The Daily Star published in May.

Commodore M. Monzur Hossain, Dhaka North City Corporation’s (DNCC) chief waste management officer, said two-thirds of their 2500 waste management workers have already been given PPE. Other protective gear such as gloves and masks were distributed to all employees and gumboots were given to those who were directly involved in waste collection, he added.

However, despite directives both from the central government and the city corporations to ensure proper protective equipment for the street-cleaners, there is no tangible evidence that they have been implemented. For instance, Alauddin, a cleaner working at the DSCC, said he had received masks and gloves of inferior quality, only meant for one-time use. Cleaners like him have to often rely on themselves for safety equipment.

While many other workers get paid to work from home, Bangladesh’s street-cleaners have no choice but to go to work. The threat of COVID-19 looms even as they pick up and organise waste material dumped by hospitals and residences, and ferry them towards designated locations.

“We are working in the face of death,” Abdul Latif, secretary of the Scavengers and Workers Union says, in resignation. Latif’s union applied for financial assistance so that they could avoid having to report to work, to no avail.

Dhaka’s street cleaners have long grappled with challenging working conditions, even pre-pandemic. Hazards on the job include illness due to exposure to harmful waste and injuries sustained while collecting waste (especially from sharp or pointed objects). Often, cleaners have to pick waste with their bare hands. They usually have no boots. But while people highlight the vulnerability of doctors and police officers, the plight of street-cleaners is invisible.

Street cleaners often suffer from various illnesses ranging from back-pain to skin disease to gastric issues, owing to their regular exposure to waste materials in jobs such as sweeping streets, cleaning toilets, emptying septic tanks and manual scavenging, according to Nagorik Uddyog, a rights-based non-profit organisation in Bangladesh. 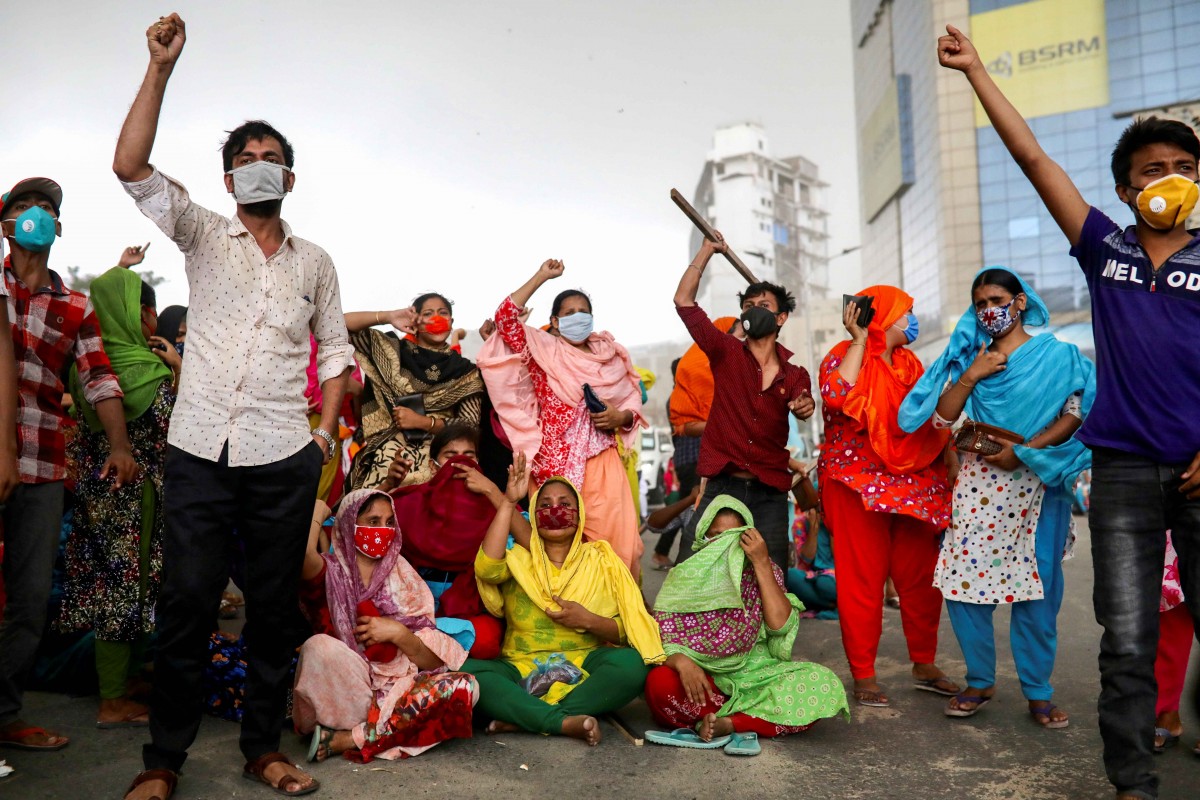 Garments workers shout slogans as they block a road demanding their due wages during the lockdown amid concerns over the coronavirus disease (COVID-19) outbreak in Dhaka, Bangladesh, April 15, 2020. Photo: Reuters/Mohammad Ponir Hossain

There is also the danger of roadside accidents. At the crack of dawn, street cleaners are at a heightened risk of being run over by vehicles. Alauddin says around 150 cleaners die every year due to road accidents. According to road safety campaign Nirapad Sarak Chai, there were 5227 deaths due to road accidents recorded last year – an increase of 51.53% compared to 2018.

A year ago, Oni’s neighbour was run over by a vehicle in Dholpur as he was working. Oni, who lives in Hazaribag – a heavily congested area known for accommodating thousands of informal workers – sets out for work every morning by foot, travelling approximately 8 kilometres. From sweeping the streets to disposing of waste materials, he does everything he can to keep an area clean.

His cousins contracted COVID-19 and passed away more than two weeks ago. Originally, they all lived in Ganaktuli Colony at Hazaribag, but now they have to rent places in the vicinity of the colony, while the authorities construct new buildings for their safety. Once a tuberculosis hospital in the British-colonial era, Ganaktuli Colony is known for accommodating members of the Dalit community.

Many of the street-cleaners live in areas like Nazira Bajar, Wari and Dholpur, all congested spaces with houses just 10 to 12 feet in length and shared with family members, according to Nagorik Uddyog. Due to population density, physical distancing is not possible for people in these areas.

Between 1 and 1.5 million of Bangladesh’s street-cleaners are Dalit. The fear of being stigmatised is so strong that many (particularly from the Hindu community) prefer to refer to themselves as ‘Harijan’ or ‘Child of God’ a term popularised by Mohandas Karamchand Gandhi – though in India, many members of the community today feel this term is patronising and identify as ‘Dalit’ instead. Although caste is traditionally associated with Hinduism, in Bangladesh these practises have also been adopted by a small proportion of the Muslim community. Without the cleaners, the city will cease to function and become choked with waste; yet their profession hardly inspires societal respect.

As Nagorik Uddyog points out, many of the street-cleaners are vulnerable because they are often employed contractually. Due to the ongoing crisis, many contract workers have lost their jobs, as have street-cleaners working for private entities. Those who do retain their jobs (such as the more than 10,000 cleaners who work at both city corporations) find the pay inadequate.

A part-time government cleaning job pays around BDT 1200 (USD 14) a month for around two to three hours of work a day, six days a week. The government hours for cleaning are usually from 6 to 8 am, leaving the rest of the day free. Since the work is completed in the early morning, when other employees are just beginning to wake up, employers are relaxed about allowing substitutes to complete the work, giving those who work at the city corporations more social power within the community. Yet, many of these workers have to rely on manual scavenging for survival – a task made more difficult thanks to the pandemic.

According to International Dalit Solidarity Network (IDSN), a network of international human rights groups, development agencies, national Dalit solidarity networks from Europe, and national platforms in caste-affected countries, between 3.5 and 5.5 million Dalits live in Bangladesh. Their origins can be traced to areas currently in the Indian states of Uttar Pradesh and Andhra Pradesh, among others.

Many of them came to the region as early as the 17th century, mostly to dispose of dead bodies that had been left by a massacre caused by Burmese dacoits in the 1620s. Later, in the 19th century, many Dalits were brought by the British to do jobs such as sweeping, clearing sewage, working in the tea plantations and working at railway stations. This history of working in difficult jobs for low pay persists today in Bangladesh, and Dalits continue to face systemic discrimination.

Dalits in Bangladesh lack political representation at all levels (with the exception being the tea garden areas). Ninety-four percent of Dalits have no links with any political parties and 4% have involvement at the local level but no role in decision making. Political parties in Bangladesh operate under the ‘Representation of Peoples Order, 1972’, which sets the rules and regulations for the parties but does not specify membership criteria, other than requiring a 33% quota for women at all committee levels of the political parties by 2020. There has been no attempt at a policy level to accommodate marginalised communities in political activity.

Along with their lack of political representation, Dalit communities face discrimination in mainstream employment. A 2014 report by Altaf Parvez and Mazharul Islam, Dalit Communities in Bangladesh: Situation of Discrimination, Exclusion and Untouchability found that 59% of Dalits faced discrimination in their workplace as a result of their caste identity. Apart from this, there were reports of verbal abuse, low pay, being forced to work overtime and even an embargo on touching other people’s belongings in the workplace (as many of 40% of those surveyed said they had experienced this embargo.) 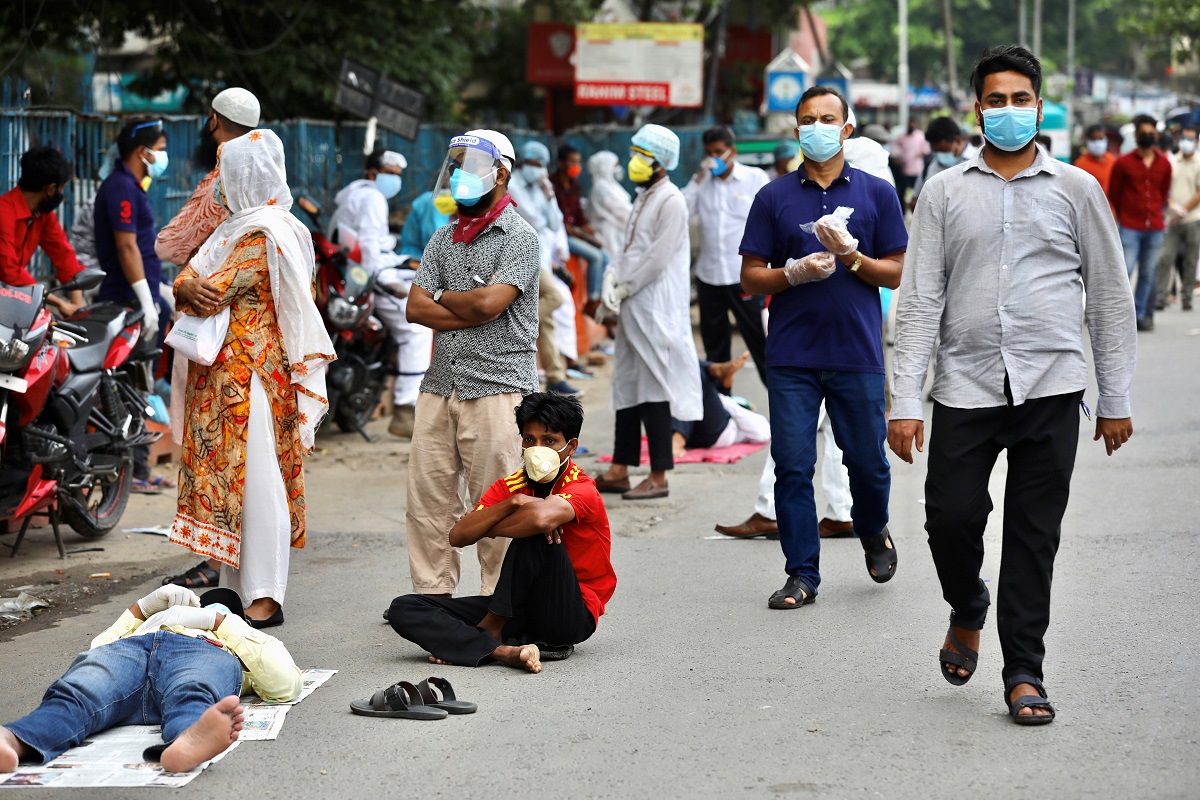 People wait in queue outside of a coronavirus testing centre in Dhaka, Bangladesh, May 17, 2020. Photo: Reuters/Mohammad Ponir Hossain

Dalit women are particularly marginalised, with a high incidence of child marriage and early motherhood reported among the community, along with high rates of illiteracy. Patriarchal values ensure their economic dependence on men and limit their career options. They are also vulnerable to domestic violence. In the event of being abandoned or widowed, they struggle for survival.

And the stigma of being Dalit is passed from generation to generation.

The children of Dalits who are street sweepers face problems in educational institutions as they are treated differently by teachers and students alike. When asked about their address, they often lie that they are from a different area so as not to give away that they live in a ‘sweepers’ colony’. Even those who graduate are often left disillusioned when applying for jobs – as their address revealing their origins can sometimes mean employment rejection.

The push for an anti-discrimination law

The caste-based system persists despite Bangladesh’s constitutional prohibition of discrimination based on caste (articles 27 and 28 establish principles of equality for all citizens). However, in the past five years, Bangladesh’s Dalit community has begun to organise, thanks to the efforts of civil society organisations, and so the discrimination they face has been more widely reported.

In a joint 2018 report by the Bangladesh Dalit and Excluded Rights Movement (BDERM), Nagorik Uddyog and the IDSN, the Human Rights Committee recommended that steps be taken to ensure that all communities receive equal access to rights guaranteed under the International Covenant on Civil and Political Rights (ICCPR), as well as to accelerate the adoption of the 2015 anti-discrimination bill and ensure its effective implementation. The anti-discrimination bill, which was pursued by rights groups for almost two years, is an ‘umbrella law’ meant to advance the rights of not only the Dalit population but all minority groups. It is yet to be passed into law.

Apart from the anti-discrimination bill, Dalits in Bangladesh have also called for quotas in education, special allocations in the budget, the formation of a special commission to advance their rights within the Human Rights Commission, projects for income generation, and a fund to develop housing. Some of these demands, such as the special commission, have been addressed by the government. Some have been only partially addressed. Dalit street sweepers have fought for an 80% quota in the profession, yet despite this, these jobs are being given to those higher up the caste ladder across both Hindu and Muslim communities, making them fear the loss of their traditional livelihood.

It is undeniable that street-cleaners have put their own bodies on the line to keep Bangladesh clean during this pandemic; they face numerous risks in doing so. Yet, they continue to fall through the cracks of society.

Shah Tazrian Ashrafi is a freelance journalist based in Dhaka.

The article was originally published on Himal Magazine and is republished via Progressive International.