With no or poor connectivity, students cannot attend online classes while schools and colleges remain closed due to the pandemic. Karachi: Students in Quetta, Balochistan, were beaten up by the police last week when they protested the lack of internet access across the province.

With no internet connectivity in several districts of Balochistan, and very poor network in others, the students cannot attend the online classes announced by the Pakistan government as schools and colleges remain closed due to the COVID-19 pandemic.

Most of the students in the province come from villages and small towns with limited facilities for internet access. The Inclusive Internet Index 2020, which surveys 100 countries to determine who gets internet access and who is denied it, ranks Pakistan at No. 76, stating that “low levels of digital literacy and relatively poor network quality are major impediments to internet inclusion” in the country.

Balochistan has had poor or no internet connectivity since 2013, claims 25-year-old Mahrang Baloch, who is part of the Baloch Students Action Committee that is leading the protests across the province. Others, however, say that internet problems arose two years ago.

“People claim that this problem has existed in Kech district only for two years, but I visited Turbat (the Kech district headquarters) in 2013 and there has been no internet since then,” says Mahrang.

Mahrang has been jailed four times for her stand on various issues. The first time she went to prison, it was because she raised the issue of her missing father. This year, she has so far been jailed twice for demanding rights for students.

Pakistan’s FATA region (Federally Administered Tribal Areas) has also had no or poor internet access since 2016. Gilgit and Baltistan complain of the same problem.

Internet access in these places was deliberately limited by the Pakistan government on the basis of demands from security agencies who say that all these areas tend to be politically unstable and sensitive to security issues, making internet access a threat to the nation.

This is in direct contrast to the Pakistan Tehreek-e-Insaf-led government’s aim to create ‘a digital Pakistan’. The government website shows that the country has facilities for digital education, but Balochistan students have no access to the internet.

“Our demand for the restoration of the internet is not illegal,” says Mahran. “We (the Baloch) are treated badly. First, we have to fight when our loved ones are abducted and now we must flight for the simple right of internet access.”

One of Mahrang’s fellow students who lives in Khuzdar has to travel for two hours to a mountain area so she can attend her online classes. This is both a waste of her time and hazardous for her health while the coronavirus pandemic continues. “When she gets there, sometimes there is no internet there either, or the teacher has changed the class timings,” claims Mahrang.

Because of the lack of internet access, Baloch students cannot apply online for scholarships. Nor are they able to supplement their textbook learning with new information available on the internet. Now, because there is no or poor internet access and all classes are online only due to the pandemic, they get no education at all.

This is despite the fact that they have paid their school and college fees. If they cannot complete the semester currently in session, they will have to pay fees again for a new semester since schools and colleges refuse to return the fees already paid or carry them over for a new semester. One of Mahrang’s fellow students has lost 50,000 Pakistani rupees in fees.

“The authorities don’t seem to understand our anguish,” says Mahrang. “It is as if our issues do not bother them.”

Mahrang is bitter about the Pakistan government’s calls for the full restoration of internet connectivity in Kashmir when much the same situation exists in Balochistan. The Government of India had cut Kashmir’s access to the internet in August 2019, immediately after reading down Article 370 of the constitution, which had granted Jammu and Kashmir special status. Internet services – only 2G – were partly restored in January 2020, but access was granted initially only to white-listed websites. The restoration of 4G services in what is now the union territory of J&K is still being “considered” by the Government of India, though a special committee the Indian Supreme Court tasked for the review has yet to be notified.

“I don’t believe Pakistan even cares about Kashmir; they just use Kashmir as a tool for its own interests,” says Mahrang.

Balochistan’s internet access was cut completely when a Pashtun youth was lynched and killed in Quetta on May 29 this year by a mob in Hazara Town. According to Mahrang, it was restored in two days. However, swathes of Balochistan has suffered the lack of internet connectivity for years, she adds.

The students are not demanding 3G and 4G connectivity, says Mahrang. All they want is a simple PTCL (Pakistan Telecommunication Private Ltd) connection. But that has been banned by the security agencies.

“If the Baloch people are security risks, then kick them out of all cities, because their very existence is a security risk,” says Mahrang.

For the Pakistani media, Balochistan might as well not exist, alleges Mahrang. “I do not ask journalists to report what we say, but at least do justice to your work and write balanced reports,” she says. “Unless we (the Baloch people) get beaten up, no one pays attention to our cries. Baloch news only matters to the media when there are bomb blasts in the province.”

Students said that if their demand for the restoration of internet access was illegal or used as a ploy by a Baloch nationalist group, then how come Baloch senator Mir Kabeer Ahmed presented a letter to the chairman of the senate on June 12, asking for internet access for seven districts in Balochistan? 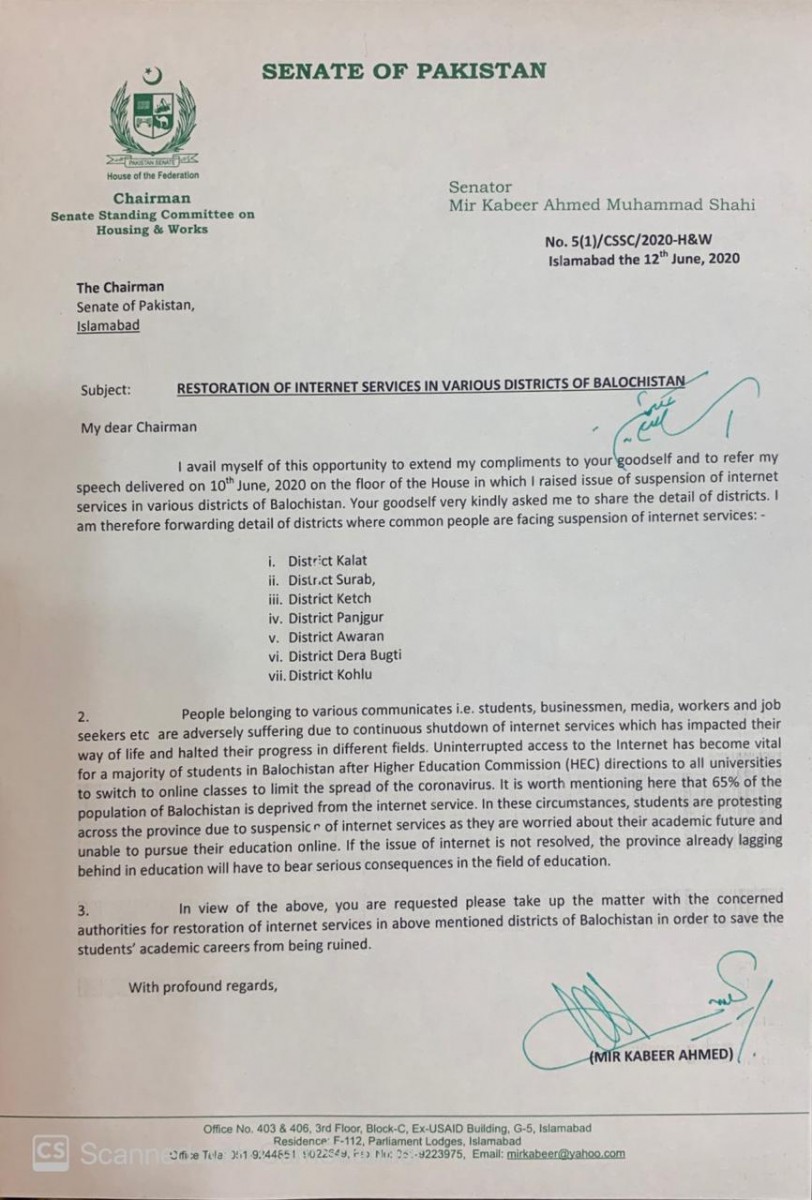 Author Mohammad Ali Talpur, whose columns are banned in the Pakistani media because he writes about Balochistan’s issues, says Baloch’s problems do not fit into the framework of Pakistan’s interests. The internet issue, he says, is genuine and must be a basic right for Baloch students.

“The Pakistan government and activists and journalists can cry for Kashmir and demand the restoration of the internet there, but what are they are doing in their own home?” Talpur demands. “Do Baloch students have no right to even an education? If the government does not want to educate Baloch students, then what do they want to do with them?”

While the provincial government has held talks with the protesting Baloch students, Mahrang says they were disappointing. She calls them “political talks,” nothing more.

“Balochistan has had an internet blackout for years now. We will continue to fight for its restoration,” she says.