At an Afghanistan Border Crossing, People Face Uncertainty and a Long Wait

The crossing at Torkham is the busiest between the two countries. Since last month, it has seen a sharp dip in pedestrian crossings as tight controls have been imposed. 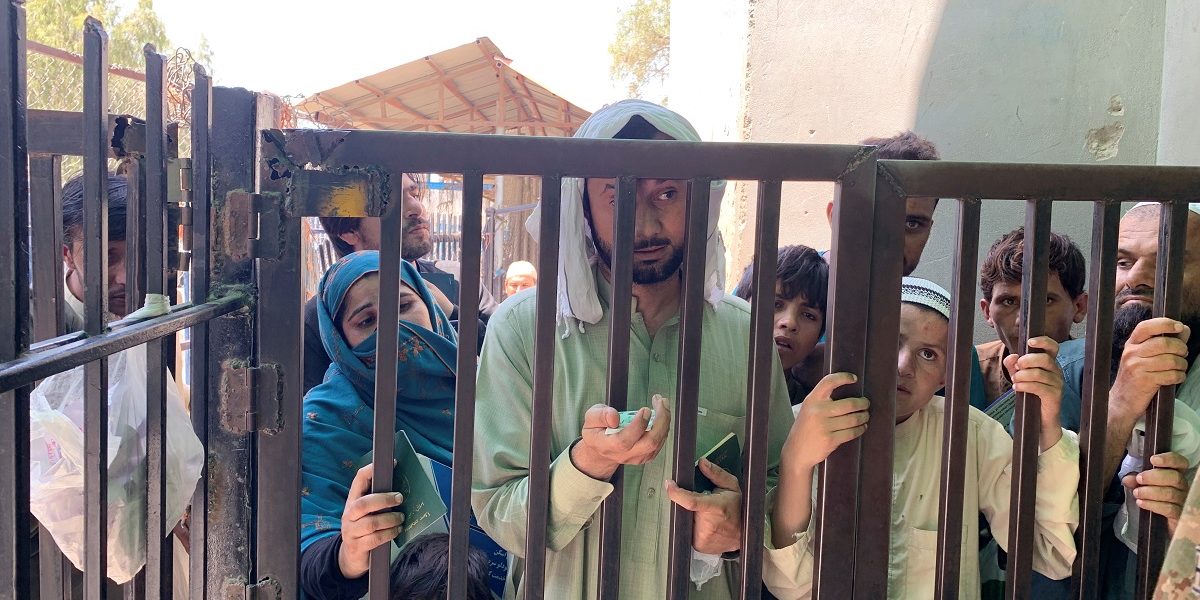 Pakistani Shafiq Mohammad, 40, stands with his passport and identity cards of his family members, at a closed pedestrian crossing gate, during an organised media tour to the Pakistan-Afghanistan crossing border, in Torkham, Pakistan September 2, 2021. Photo: Reuters/Gibran Peshimam

Torkham, Pakistan: Pakistani Shafiq Mohammad, 40, stands at a closed pedestrian crossing gate on the Pakistan-Afghanistan border, holding a passport and a stack of identity cards and imploring Pakistani officials to let him and his family through.

The crossing at Torkham, now manned on the Afghan side by armed Taliban soldiers, has long been the busiest between the two countries, but since last month has seen a sharp dip in pedestrian crossings as tight controls have been imposed.

“I don’t know (why they’re not letting us in), we’re also standing here asking why you do not let us… what is the procedure, how can we proceed,” Mohammad says through a metal-barred gate from the Afghan side of the border.

With air traffic suspended, Torkham is one of the few gateways out of Afghanistan. But worsening security has prompted authorities to clamp down on border movement, with an average of just 85 daily crossings in August at Torkham, against 7,000-8,000 in March and April.

Commercial traffic has kept up, with a steady stream of trucks passing through. But crowds have been pushed back from the border area by Taliban fighters and kept on the Afghan side on the Jalalabad-Peshawar highway.

Pakistani authorities have had to work with the Taliban on the local level to make sure the borders remained staffed and orderly after Afghan forces melted away in August with the departure of President Ashraf Ghani.

Sajid Majeed, deputy inspector general of Pakistan’s Frontier Corps, said coordination was necessary to check documents and there were regular contacts at the local level between Pakistani officials and their Taliban counterparts.

“That is part of routine. Beyond that, I think things are still in the pipeline,” he said. Pakistani soldiers stand guard in front of a member of the Taliban force, in the background, during an organised media tour to the Pakistan-Afghanistan crossing border, in Torkham, Pakistan, September 2, 2021. Photo: Reuters/Gibran Peshimam

The mountainous, and often lawless, border had historically been fluid for pedestrians, with families and tribes living on either side. They crossed from all points and mostly without hindrance.

However, for the last few years both Pakistan and Afghanistan have traded accusations that the other side has sheltered militant groups and allowed them to conduct attacks across the border. Pakistan has now almost completed a metal fence along the 2,600 km (1,600 mile)-long frontier.

Pakistan began erecting the fence, which snakes through snow-peaked mountains and treacherous ravines, four years ago. It now has over 440 forts in the north western region alone, as well as cameras, watchtowers and over 800 drones.

With only five official crossing points, including Torkham, now remaining between the two sides, things have changed for people like Mohammad, who said he had previously crossed the border frequently.

“We were allowed to pass (previously). Now the rules have changed. Every day the rule is changing,” Mohammad complains.

“This time if I cross the border then…” Mohammad says, gesticulating to suggest he would not cross into Afghanistan again. He seems careful not to say anything that might upset the Taliban guards hovering behind him.

After negotiations with the Pakistani border officials, which are unsuccessful for reasons that are unclear, Mohammad, his family, and some others are ushered away from the crossing by the Taliban border guards. They threaten to hit some people with whip-like devices to keep the line moving.

Another family does manage to get through. A girl in a wheelchair crosses into Pakistan as Mohammad and his wife and children disappear back into the crowd on the Afghan side.