As Bhutan Goes to Polls, India Is the Elephant in the Room

All political parties had come to an agreement before the campaigning started that they would not 'politicise' sensitive issues like foreign policy, but at least five cases before Bhutan's election dispute settlement system were about parties trying to defame rivals using India-Bhutan relations. 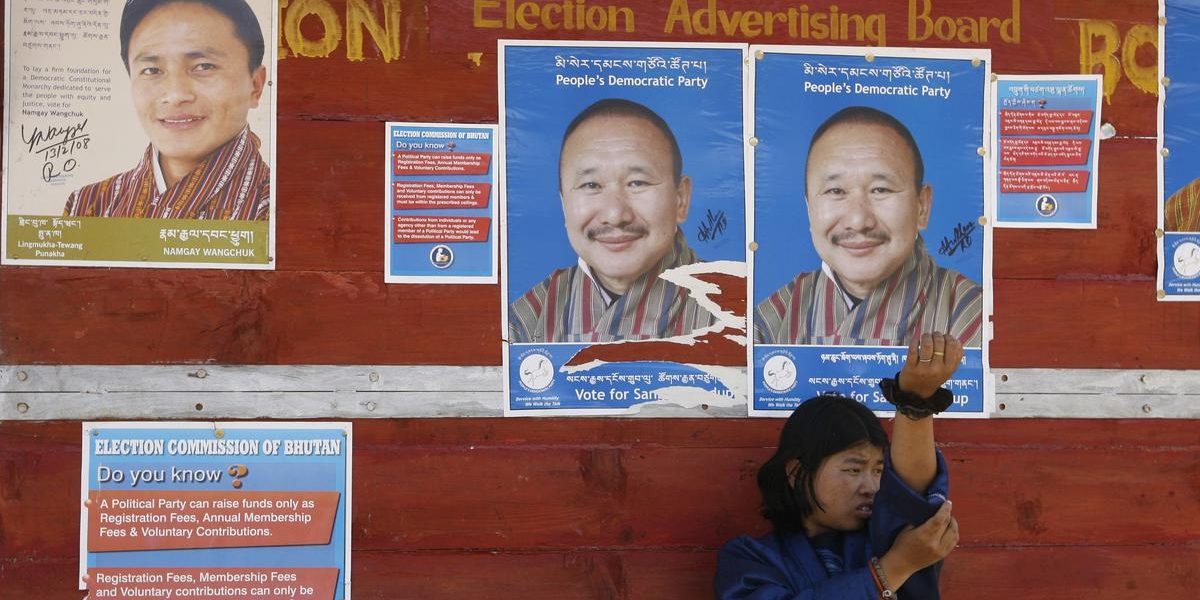 A Bhutanese girl, in 2008, stands in front of election campaign posters for Bhutan’s first parliamentary elections in its history. Credit: Desmond Boylan/Reuters

New Delhi: In the noisy run-up to Bhutan’s general elections, India was the foreign policy elephant in the room. Always there, and yet not to be discussed openly.

This curious omerta – where political parties are not allowed to make pro and anti-India accusations, but do so nevertheless in election-oriented online chat groups – has resulted in a number of election dispute cases.

On Thursday, Bhutan will go to polling booths to choose between candidates of two political parties, Druk Nyamrup Tshogpa (DNT) and Druk Phuensum Tshogpa (DPT), for the third parliament. The two parties were chosen for the general round after they got the highest number of votes in the first round on September 15, which saw the shock defeat of the ruling People’s Democratic Party (PDP).

In the 2013 elections, then challenger PDP had openly campaigned that the increase in LPG and kerosene prices, due to a cut in subsidy, was a demonstration of ruling party DPT presiding over “deteriorating” ties between India and Bhutan.

A book that profiled Bhutan’s second parliamentary elections observed, “Although India came on record to say removal of subsidy was ‘coincidental’, it worked well for the opposition. The issue dominated every common forum for campaign and public debates between candidates that was being carried out on a daily basis.”

Five years later, India or any foreign policy matter, is formally off the list of agendas that can be discussed during the campaign. Before the election process started, all the parties had agreed not to bring in “sensitive” subjects like national security and foreign policy into their campaigns.

Publicly, the political parties adhered strictly to this guideline in debates, rallies and speeches. This was despite Bhutan having gone through a 73-day long stand-off on its border between Indian and Chinese troops in 2017, which had thrown up questions about the kingdom’s relations with ITS southern neighbour.

But, party members were not as disciplined on social media, especially on WeChat, the highly popular Chinese messaging mobile application. The election commission had 20 social media monitors in various official WeChat groups of parties and candidates, but acknowledged that it was “a challenge to monitor all WeChat groups which is mushrooming for various purposes”. In total, the election commission of Bhutan received 17 cases through its Election Dispute Settlement System. Out of them, at least five involved cases where the complainant asserted that the accused had used India-Bhutan relations to defame their political rivals.

Immediately after the campaign started, the second case to arrive before the EC authorities embodied this very theme.

On September 19, central district of Trongsa’s Dzongkhag election dispute settlement body (DEDSB) received a complaint against Yeshey Penjore, DNT’s candidate from Nubi-Tangsibji constituency. The complainant, DPT’s candidate Nidup Zangpo, claimed that Penjore had “circulated a message on WeChat that Indian Support to Bhutan would be compromised if DPT was elected”.

DPT shared an audio recording that Penjore had posted on September 17. As per a report in local newspaper Kuensel, Penjore accepted that it was his own voice, but claimed that it was posted only in the in-house WeChat group for DNT supporters. He also argued that his message had been taken out of context.

Also Read: India’s Real Problem Lies in its Bhutan Policy, Not the Border

In the audio message, the DNT candidate said, “We should convey that DPT coming to power is not in our interest.” He added that Bhutan’s share of development assistance from India would be impacted if DPT won the elections.

In just a week, the DNT candidate was found guilty of violating provisions of Election Act’s code of conduct, as well as ECB’s regulations for political parties and social media. He was fined Bhutanese Ngultrum 12,900 – equivalent to two month’s daily minimum wage rate.

After the ECB’s fine was announced, DNT’s spokesperson Tandi Dorji had told The Wire that there was no plan to appeal against it. “The matter is settled,” he said. However, he added that Penjore’s message “had been twisted”. “He had only been trying to explain the history of the last elections,” Dorji said.

DPT president Pema Gyamtsho told The Wire that there was an understanding between the political parties not to talk about foreign policy issues. “We don’t want to politicise important issues like national security, foreign policy and especially relations with India, which are very sensitive,” he said.

Economic interests are the top priority

Brian C. Shaw, a long-time researcher on Bhutan, explained that foreign relations are not the top-most priority for Bhutanese voters, except if they intertwine with economic interests.

“I believe it’s true to say that for voters in Bhutan, as elsewhere, the principal issues at election time are economic, especially livelihood issues…Foreign relations and the issue of Bhutan-India, or indeed Bhutan-China relations, is not relevant for voters,” the retired University of Hong Kong professor said.

Foreign relations are not the top-most priority for Bhutanese voters, except if they intertwine with economic interests.

He noted that during the 2013 elections, the PDP had managed to profit by using the cut in subsidy for LPG and kerosene to spread fear of rising prices. “The economic issues were uppermost. The PDP theme of India ‘punishing’ DPT for an alleged pro-China policy was secondary to this dominating economic theme, in the mind of many voters, but of course induced a certain pro-PDP tendency in some electorates,” he told The Wire. Shaw pointed out that even a small shift in the electorate was relevant, since many of the seats in the 2013 election were won on small margins.

Even the latest election dispute cases associated with India-Bhutan relations or Bhutan’s foreign policy have an economic tinge.

Penjore had said in the WeChat voice message that Indian aid may decrease and “people along the border would be affected”.

A similar complaint was filed by DPT against three persons in the eastern district of Samdrup Jongkhar, which borders India’s Assam state. The party’s coordinator claimed that during a discussion on a WeChat group, one of the accused had claimed that “Bhutanese residing in the border dzongkhags (districts) would be affected if relations between Bhutan and India were not strong”.

A case was brought against the three, even though it wasn’t clear that they were DNT workers. The EC closed the case by fining them each a month’s minimum wage.

In eastern Trashiyangste district, the focus of all economic activities is the Kholongchu, the first hydropower project under a joint venture model, rather than an inter-governmental model between India and Bhutan. The foundation for the 600 MW project was laid down by Indian Prime Minister Narendra Modi during his maiden foreign tour to Bhutan in June 2014.

Four years later, the concession agreement is still to be signed, with the Bhutan government having a second look at some of the clauses related to cross-border transmission of power.

Meanwhile, major civil works have still to commence, increasing economic anxiety in the district, which is seen as a DPT strong-hold. 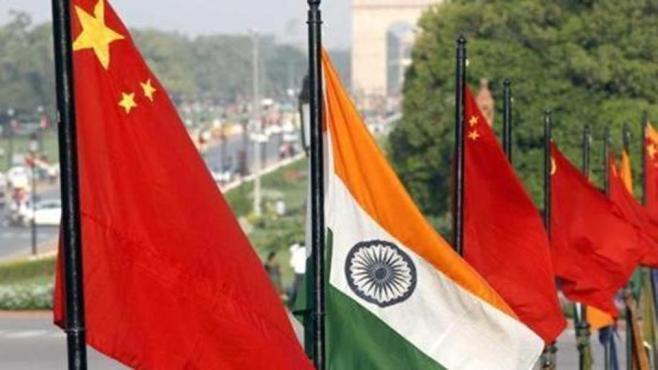 On October 3, a complaint filed by DPT coordinator in Trashiyangtse accused a DNT supporter of spreading misinformation about an Indian media report that if DPT formed the next government, there would be no aid from India.

Not surprisingly, the DNT member’s sound clip had a specific reference to the hydropower project. “This is a fact that everyone must be aware of and is also broadcast in Indian news. When there is no Indian support, then initiating Kholongchu project is not possible,” said the accused in an audio message posted in a closed WeChat group of DNT supporters. He was fined a month’s daily wage.

Another coordinator in Punakha and a supporter in Nganglam, both belonging to DNT, were also fined a similar amount for claiming in separate messages on different WeChat groups that India’s relationship with Bhutan would be negatively impacted by a DPT win. The DNT party coordinator stated that his message, which said Indian aid and imports could be axed, was only a translation of a video on India-Bhutan relations posted online by an Indian media organisation.

India had committed to contribute nearly a quarter of Bhutan’s allocations for 11th five year plan which ends in 2018. Discussions for the 12th five year plan are still ongoing. Bhutan receives nearly half of India’s total foreign aid.

With persistent social media messages, DPT president Pema Gyamtsho also addressed the “talks doing the round” that fuel prices would soar if his party won the elections.

According to a report by the state-run Bhutan Broadcasting Services, prices of diesel and petrol in Bhutan are at their highest since July 2014.

The rise in fuel prices has special resonance for DPT, as they had to also battle similar perception during campaign for the 2013 elections.

Therefore, DPT president had little choice but to take immediate cognisance of “rumours and speculation” that fuel price increases were linked to results of the parliamentary elections.

Another speech was also posted on DPT’s page in which the party president urged not to “politicise” India-Bhutan relations.

Interestingly, DNT also filed a complaint that an unnamed DPT supporter in Drametse-Ngatshang had circulated a WeChat message that China would interfere in Bhutan’s “internal peace and policy if DPT loses the election”. The complaint claimed that the audio recording alleged that the Doklam crisis was only settled after former prime minister and DPT leader Jigme Thinley had “intervened”.