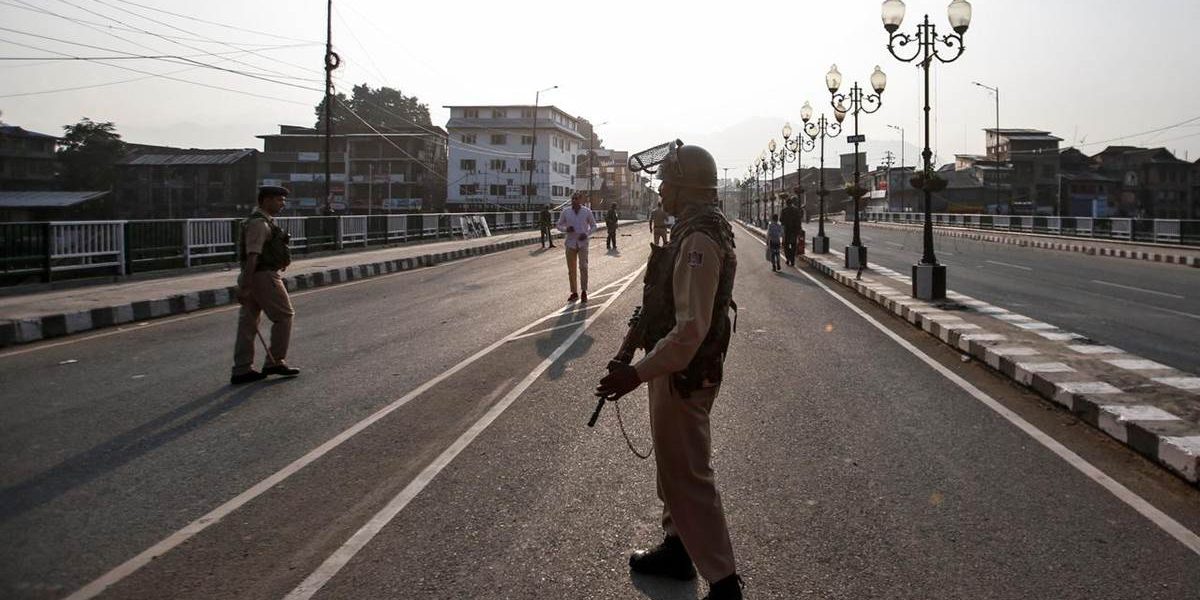 Jahra who is affiliated with the National Conference told The Wire on Thursday over the phone that the party’s DDC members have been “treated like criminals”.

“Eight of my colleagues have been detained by the police at different locations. Some of us were picked from our homes and kept at a hotel without any detention order. The delegation is now in Jammu but still they are not releasing us,” he said.

However, the treatment meted out to Jahra and others didn’t reflect in Khan’s speech. He was speaking at a government college in Budgam’s Magam college – where the delegation of nearly two dozen foreign envoys, who are in J&K for a two-day visit, was present.

On the contrary, Khan sounded generous in his praise of the Bharatiya Janata Party (BJP) government’s decision of “starting the decentralisation of developmental process to empower common man to plan and execute development plan”.

“Over the last few years,” Khan said in his speech, reading from a paper that seemed to have been prepared for him, “especially after August 2019, remarkable changes have been happen (sic) on ground to realise dreams of the people.”

Earlier this month, Khan emerged as the unlikely winner of the election for the chairperson of Budgam DDC.

But, the election was reportedly shadowed by allegations of rigging and partisan role of the Union Territory administration. The National Conference had won eight out of 14 seats in Budgam district, giving it a simple majority. With the support of one PDP (Peoples Democratic Party) candidate, the party was expected to sail through to bag the chairperson’s post.

However, there was a tie, according to an official statement by the J&K government which didn’t give more information. The “tie” prompted a “draw of lots” and Khan who contested DDC polls as an ‘independent’ was declared as the winner. He was previously affiliated with the PDP but has recently warmed up to a local party that enjoys the blessings of the BJP, according to sources.

Also read: From One Year of the Gag to the Next, ‘Normalcy’ in Kashmir Comes at a Price

Days after the loss, National Conference leader Omar Abdullah posted a picture on Twitter with his party’s eight DDC members, stating that the party was going to challenge the election of Khan. “Talk about murdering democracy in J&K. I met 8 of our DDC members of Budgam district. There is at least 1 more alliance member …. so 9 out of a total strength of 14 & yet in an “election” an independent member was made the chairman.”

Talk about murdering democracy in J&K. I met 8 of our DDC members of Budgam district. There is at least 1 more alliance member of Javaid Mustafa Mir’s party so 9 out of a total strength of 14 & yet in an “election” an independent member was made the chairman. pic.twitter.com/u6dwBP902C

Besides the envoys, Khan’s audience at the college comprised of top J&K bureaucrats and police officers, members of the DDC and panchayat institutions, district heads of various government departments and other employees posted in the district.

However, the animated scenes inside the Magam college sharply contrasted the pin-drop silence outside. A spontaneous shutdown was observed by traders in Magam who began their day late in the afternoon on Wednesday after the delegation had left for Srinagar.

In Srinagar, the cavalcade of foreign envoys drove into The Lalit, a mesmerising property tucked in the lap of Zabarwan hills, which offers a panoramic view of Srinagar’s iconic Dal Lake. A roundtable conference was set up and a number of delegations sat down with the visitors to “share ideas” and “discuss the situation” in Kashmir. 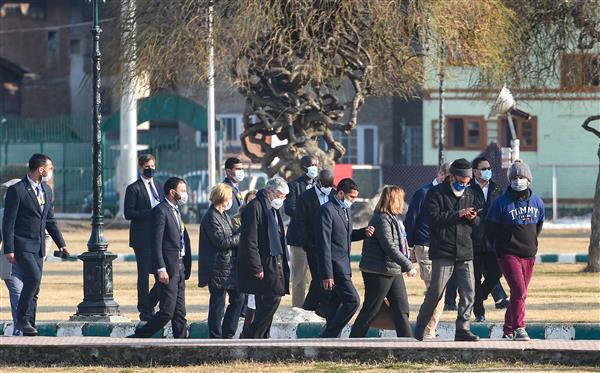 A delegation of 24 foreign ambassadors on Srinagar visit. Photo: PTI

Srinagar’s mayor Junaid Azim Mattu briefed the envoys about the recently concluded DDC elections. He claimed that the visiting dignitaries were “apprised of the landmark elections and all of them agreed it was a free and fair process.”

“They wanted to know the ground realities. Elected representatives from all political opinions and parties participated. The key issue discussed was the decentralisation of power, and planning and empowerment of the grassroots representatives,” said Mattu, who recently joined former J&K minister Altaf Bukhari’s Apni Party.

Among those who participated in the roundtable were the DDC and panchayat members from Srinagar and other parts of Kashmir, officers of the civil administration, and more than a dozen editors and correspondents of local and national newspapers and television networks.

“We told them that press freedom has been restored in Kashmir,” one editor, who didn’t want to be named, said. “We also underlined the need of starting the political process in J&K by holding assembly elections at the earliest.”

“Normally, police would stop us at the main gate of the hotel. But this time they didn’t allow us to even reach the gate. We were kept some 300 metres away due to which we couldn’t even shoot,” said Sajad Bhat, who works as a video journalist with a regional TV network.

Barely a few hundred metres from the venue of the roundtable meetings, dozens of boatmen, rendered jobless by the security restrictions in Srinagar, were basking in the afternoon sun.

“Thank you for visiting Kashmir,” Omar Abdullah tweeted, “Now please send some real tourists from your countries to visit J&K.”

Thank you for visiting Kashmir. Now please send some real tourists from your countries to visit J&K. #envoysvisitJK

After winding their talks with the government representatives and journalists, the envoys left the hotel for Hazratbal shrine. Hours before the visit, dozens of Srinagar Municipal Corporation workers were deployed to clear mounds of dirty snow from the streets of the shrine which houses a relic of Islam’s most revered Prophet Mohammad.

The shrine too was off-limits for journalists as well as locals, barring few workers of the shrine. In the evening, the last leg of the envoys’ programme started at Sher-e-Kashmir International Convention Centre where they held a brief interaction with a small group of Kashmiri artisans, poets and writers. Sources said the list of the participants in the interaction was vetted by the security agencies.

“Forget asking questions to envoys, we were not even allowed to go near them. They were accompanied by a media team from Delhi who distributed the footage among all the TV networks. Our networks didn’t even use the footage we had sent,” said a TV journalist, who didn’t want to be named.

This was not surprising. Many interesting events took place in Kashmir ahead of the two-day visit facilitated by the Union Ministry of External Affairs to showcase the “progress” made by the Narendra Modi-led government in J&K after the reading down of the special status.

First came the sudden announcement of the restoration of high speed internet in J&K, reportedly under pressure of the new US administration led by President Joe Biden. Two days before the envoys landed in Srinagar, orders to restrict the movement of two former chief ministers – Mehbooba Mufti and Omar Abdullah, were withdrawn. But none of them was invited to the meet the envoys.

A day before the visit, Sheetal Nath temple in Srinagar’s downtown opened for the first time since the onset of militancy in the Valley when Kashmiri Pandits migrated to Jammu and other parts of the country, and their places of worship were closed. A three-year-old CRPF bunker on a strategic road that brings visitors to Srinagar from its only civilian airport was demolished.

Once the delegation had landed in Kashmir on Wednesday morning, a ‘wall of kindness’ came up on the Gupkar Road out of nowhere, prompting Omar Abdullah’s sister, Safiya Abdullah, to wonder whether the wall was meant to “offer warm clothes to the EU delegation!”

This has sprung up overnight on Gupkar Road. Perhaps it’s to offer warm clothes to the EU delegation? pic.twitter.com/q0WcztVudY

The irony of all this was not lost on many Kashmiris who took to social media to express their thoughts. “Will bunkers appear again after two days. Just asking,” wondered Younis Bashir, a Facebook user based in Kashmir.

Meanwhile, even though public and private transport was plying normally across Kashmir, a complete shutdown was observed in parts of Srinagar, including Lal Chowk, the largest marketplace of the Valley, where all the business establishments were shuttered, away from the gaze of the visiting envoys.

Normal life resumed in Kashmir on Thursday as the delegation left for Jammu where they held meetings with the lieutenant governor of J&K, Manoj Sinha, and the security establishment, including the officers of J&K Police and the Indian Army.

It was a repetition of past practices, and it does not deserve Kashmiris’ attention, said Aga Ruhullah, three-time legislator and former J&K minister.

“Those who came on the sponsored and controlled visit as part of the delegation should also reflect upon themselves as to how could they allow themselves to be used to present a wrong picture, hiding the facts on the ground,” Ruhullah added.