The legacy of Ahmad Shah Massoud, who held out against both the Soviet occupation of the country in the 1980s and the Taliban in the 1990s, lives on. 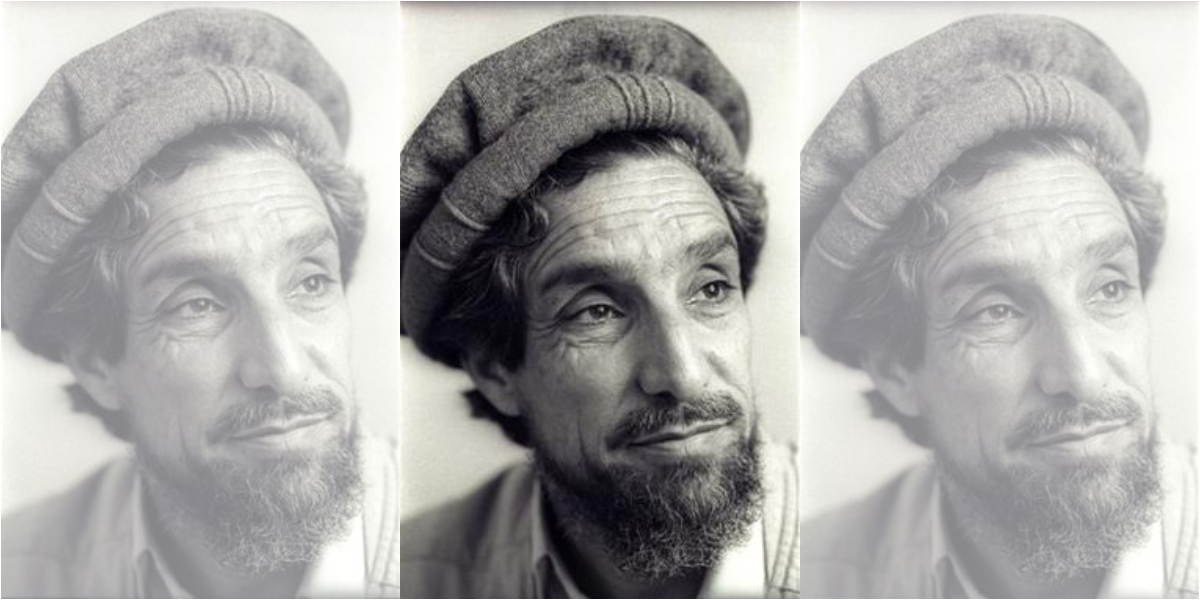 Afghanistan’s north-eastern province of Panjshir that became famous when its local warlord, Ahmad Shah Massoud, held out against both the Soviet occupation of the country in the 1980s and the Taliban in the 1990s, looks set to become the focal point for resistance against the new Taliban rulers who have a grip on the rest of the country.

Ahmad Shah Massoud’s son Ahmad Massoud and brother Ahmad Wali Massoud – along with Amrullah Saleh, a former Massoud aide and Afghanistan’s vice president – have formed the National Resistance Front of Afghanistan in the Panjshir valley and have warned of possible war.

Twenty years ago, on August 13, 2001, I conducted the last television interview given by Ahmad Shah Massoud, the internationally famous 48-year old leader of the Northern Alliance, the main Afghan resistance group that prevented both Soviet troops and the Taliban from gaining a foothold in the valley.

His main message was a condemnation of Pakistan for its primary role supporting the Taliban – a role that Pakistan continues to play today, negating efforts for peace in the region.

“In the field of military affairs, it [the Taliban] is mainly controlled by Pakistani advisors and generals, and in the foreign affairs department it is basically run on the advice of Pakistanis,” said Massoud. Pakistan wanted “to become the axis of all Islamic countries in the region”, though that was “beyond its capacity”.

Four weeks after the interview, on September 9, 2001, Massoud was assassinated by al-Qaeda terrorists posing as Arab television reporters, just two days before the 9/11 attacks on New York and Washington.

He was then the deputy president and defence minister of the UN-recognised Islamic Government of Afghanistan that opposed the Taliban government based in Kabul. He was assassinated to prevent him from being backed by the US as a stabilising force and Afghanistan’s potential new leader after what was to become 9/11.

With such a history, it is maybe not surprising that the Massoud clan should emerge as the focal point for resistance – and for media attention – as the Taliban asserts its power after sweeping through the rest of the country.

Massoud’s brother has in a video interview with the Financial Times called on the Taliban to form an inclusive government and warned, “If you conquer the [presidential] palace by force, it doesn’t mean you conquered the hearts and minds of the people.”

Massound’s 32-year old son has told the Washington Post that war was “unavoidable” if the Taliban refused dialogue and added, to the Dubai-based Al Arabiya tv channel, “We confronted the Soviet Union, and we will be able to confront the Taliban.”

The Taliban said on Sunday that “hundreds” of its fighters were heading to the Panjshir Valley, 70 miles north of Kabul, “to control it, after local state officials refused to hand it over peacefully”. Ahmad Massoud, son of the slain hero of the anti-Soviet and anti-Taliban resistance, Ahmad Shah Massoud, speaks during an interview at his house in Bazarak, Panjshir province Afghanistan September 5, 2019. Photo: Reuters/Mohammad Ismail

My 2001 interview, for Aim Television, a Delhi-based TV programme company, took place at a Northern Alliance base near the valley. Massoud was flanked by two aides.

One of them was Saleh, now 48, who has in the past week claimed to be the country’s “legitimate caretaker president” after president Ashraf Ghani fled the country.

In 2001, Saleh was the friendly ‘minder’ for our trip. More importantly, he was Massoud’s link with international intelligence agencies such as the CIA and MI6. He was also in touch with allies in neighbouring Tajikistan, which was our base for flying covertly in and out of the country in aged Russian-made helicopters. Saleh later became head of the country’s intelligence service and interior minister.

The other aide was Abdullah Abdullah, then Massoud’s foreign minister. Since last year Abdullah, 60, has been the leader of the High Council for National Reconciliation (HCNR). He is now in Kabul with former president Hamid Karzai and others negotiating with the Taliban.

Abdullah is more pragmatic than Saleh and will be seeking ways to remain relevant. He has extensive international diplomatic links but is surrounded by more formidable operators.

Saleh – famed for surviving assassination attempts – has a far-flung network of intelligence contacts and has gone out on a limb in the past week declaring he would “never be under one ceiling with Taliban”.

“I will never, ever and under no circumstances bow to the Taliban terrorists. I will never betray the soul and legacy of my hero Ahmad Shah Massoud, the commander, the legend and the guide,” he wrote on Twitter. 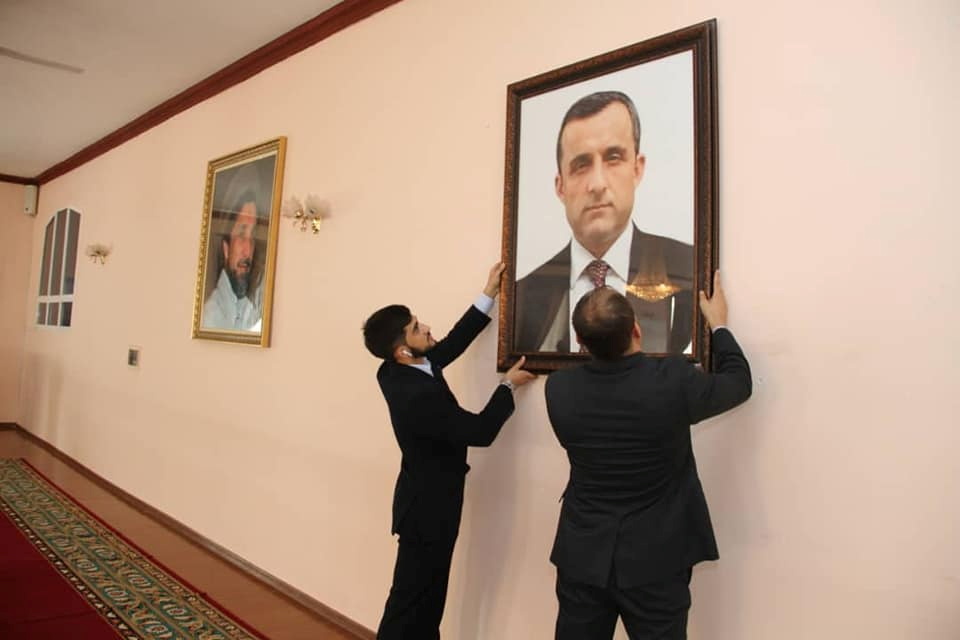 Afghan embassy staff hang a portrait of Afghan first vice president Amrullah Saleh, who declared himself the “legitimate caretaker president”, on the wall at the embassy in Dushanbe, Tajikistan, in this picture released August 18, 2021. Photo: Handout via Reuters

More co-operatively, Mohammad Zahir Aghbar, Afghanistan’s ambassador to Tajikistan and a Massoud family ally, told the New York Times they would work with the Taliban if there was an inclusive government.

Massoud’s son has also said an “inclusive government” would be acceptable but warned in an interview with the UK’s Daily Telegraph, “We are telling them that as soon as war breaks out in the Panjshir Valley, then there is no going back.”

He spent most of his youth abroad, including high school in Iran and a year at Britain’s Sandhurst military academy before gaining degrees in war studies and international politics at London University.

His father was brought to international attention by Sandy Gall, an ITN TV newscaster and foreign correspondent, who travelled across Afghanistan in the early 1980s to find the man who had been described to him by French and British officials as an ace Mujahideen leader fighting the Soviet occupation.

In our interview, Massoud added to that reputation by speaking with the assurance and self-confidence of a statesman who knew what his goals were and how they could be achieved. Fluent in French, he cut a suave stylish figure (as does his son wearing the same Pakol Afghan hat) that belied his reputation as a ruthless anti-Taliban leader.

He stressed that, though “the problem of Afghanistan does not have a military solution”, it was essential for him to achieve “a military balance and equilibrium” in order for the Taliban to lose the support of Pakistan and be removed from power. He claimed at the time to control a third of Afghan territory, significantly more than the 5% figure announced by the Taliban.

Referring to what is generally known as Pakistan’s desire for strategic depth, he said it wanted to become “the axis of Islamic countries” in the region. “Afghanistan is their first step to Central Asia. With these intentions, Pakistan has established madrassas within Pakistan for students from Central Asian countries, where they study and these students are trained by them for furtherance of Pakistani goals in Central Asia. Pakistanis are increasing their influence in the whole region and will not be only satisfied with Afghanistan. Of course, this is their first step and they will not confine themselves to just Afghanistan.”

Pakistan wanted to reduce Afghanistan “from the level of a state to tribalism”. It had “never wanted to see that the Taliban has a regular and an organised army”.

He said that Pakistan “used the Hizb-e-Islam of Hekhmatyar to threaten and murder Afghani scholars” – Gulbuddin Hekmatyar was a ruthless Mujahideen leader who became Afghanistan’s prime minister on two occasions in the 1990s and is now in the Kabul negotiations alongside Karzai and Abdullah.

Pakistan wanted to show that Afghans were “uncultured and uncivilised” and that, having “always led a tribal life”, they had “become accustomed to tribal habits and will always remain so”. Pakistan’s strategy was “to destroy the identity of Afghans”. It wanted “to bring down Afghanistan from the level of a state to tribalism.”

Publicity for the interview was mostly lost in the mass of international news coverage after 9/11 because Massoud was not of primary interest. The text was originally published in The Hindu, a leading Indian newspaper, on September 12, 2001, and is now available on the Indian Ministry of External Affairs website (with my name removed from the credit line).

The whole saga was reported on September 29, 2001 in an Indian magazine by Nandan Unnikrishnan, a journalist who was the programme producer and is now at Delhi’s Observer Research Foundation. 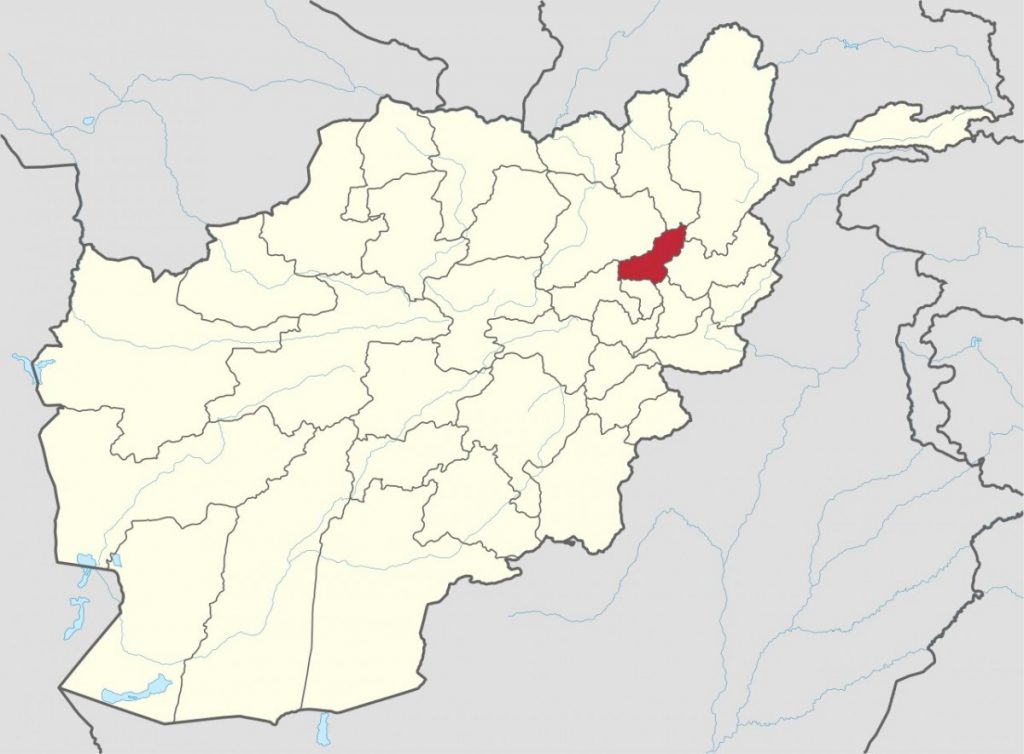 Though the Panjshir Valley was never conquered during the years of the Soviet occupation and Taliban rule, the river banks were still strewn with crippled Soviet tanks and other armaments on my last visit, with Sandy Gall, in 2003.

Defence technology has changed dramatically in the past 20 years, which must have reduced the valley’s impregnability, and it is far from clear whether the current Massoud resistance grouping is equipped to beat off the Taliban if aggression in the media does lead to fighting.

Longer term though, the Massoud legacy and the gathering of anti-Taliban leaders in the valley could provide the core for resistance to an extremist Kabul government.

Note: An earlier version of this article erroneously stated that Massoud’s son had been Afghanistan’s ambassador in London.