Instead of Pointing Fingers, Focus on Creating Spaces Where Afghan Liberal Spirit Can Survive

The deal the Trump administration struck with the Taliban on February 29, 2020 in Doha was little more than an abject surrender. 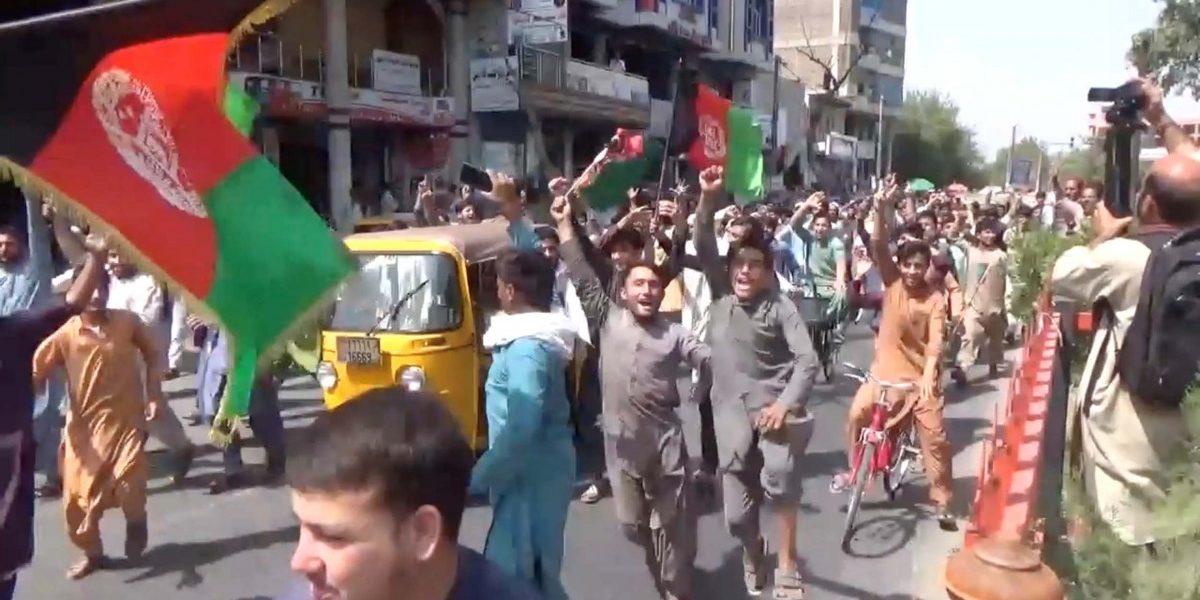 People carry Afghan flags as they take part in an anti-Taliban protest in Jalalabad, Afghanistan August 18, 2021 in this screen grab taken from a video. Photo: Pajhwok Afghan News/Handout via Reuters

India’s strategic analysts will do their share of it. Many of those fingers will point at Pakistan. President Ashraf Ghani  started the ball rolling by accusing Pakistan of sending 10,000 Mujahideen into Afghanistan in the past few months to bolster the Taliban offensive. There is no reason not to believe him, for had a government in New Delhi been caught in Islamabad’s predicament, it would probably have done the same thing.

That predicament is the likelihood of history repeating itself. The deal the Trump administration struck with the Taliban on February 29, 2020 in Doha was little more than an abject surrender. All that the Taliban agreed to was that it would not allow al-Qaeda, or any other terrorist force, to operate in the areas it controlled. Since the Americans cannot tell one ‘raghead’ from another, this was an empty commitment.

Not only was the Ghani government not a party to it, but none of its concerns were taken on board. So it was no surprise that the agreement contained no explicit commitment by the Taliban to refrain from the use of force against the Ghani government, and no requirement, let alone a time-bound one, within which to work out the modalities of power sharing with the Ghani government. And no penalties if it did not.

Also read: Afghan Leaders: Where They Are Now and What They’re Saying

The US took this agreement to Kabul for its ‘talks’ with the Ghani government only after it had signed its agreement with the Taliban. One does not need any great acumen to understand the significance of this action: it meant that the US and the Taliban had decided the future of Afghanistan. This became apparent when the US agreed in Doha to a Taliban demand that Kabul release 5,000 Taliban prisoners in exchange for 1,000 Afghan soldiers, as a pre-condition to its holding follow-up talks with Kabul from March 10, 2020.

The prisoner exchange did not take place, so neither did the talks. But that did not deter the Trump administration from proceeding with the pullout. It would therefore have been surprising indeed if the Ghani government – the democratic government that the West had itself helped to create – did not consider this agreement and its aftermath to be a betrayal. This was compounded by the US’s refusal to supply the 300,000 plus Afghan national army with any of the modern attack helicopters, fixed wing military  aircraft and logistical systems that enabled US and ISAF forces in Afghanistan to call up an air strike within three minutes of coming under attack by the Taliban. 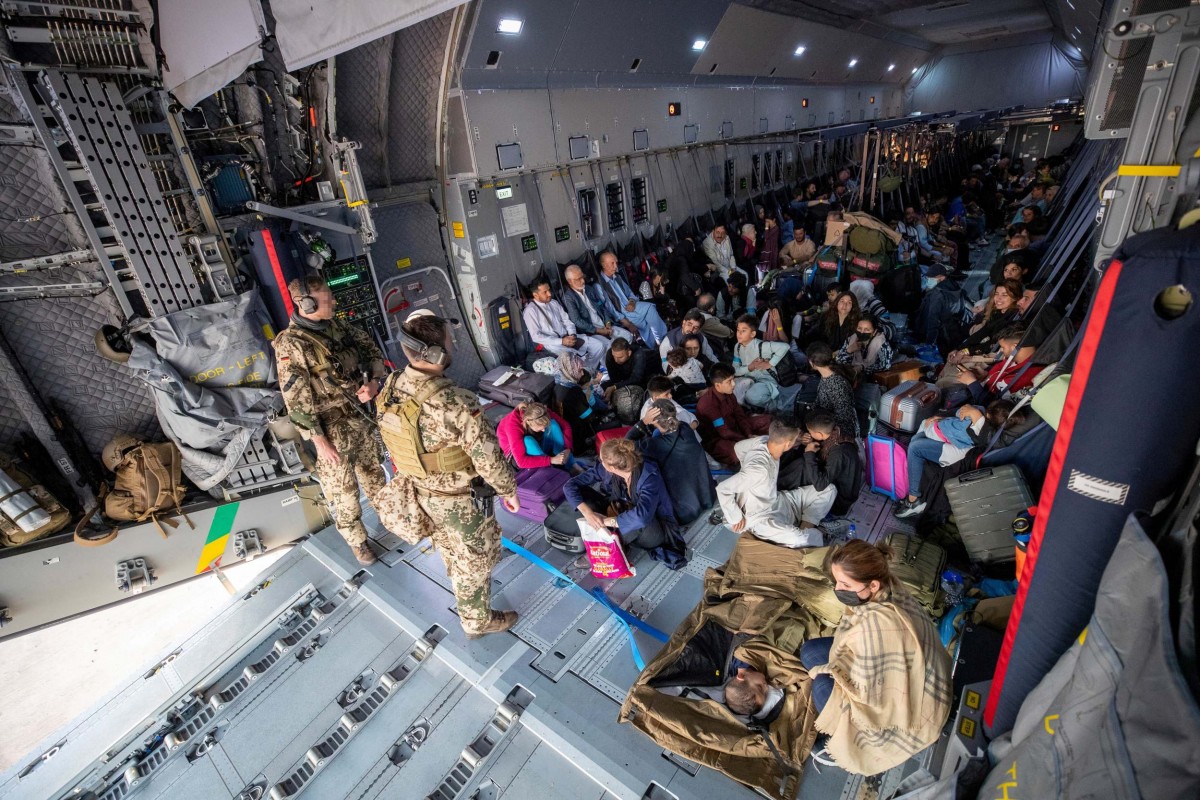 A handout photo obtained from Twitter via @Bw_Einsatz on August 17, 2021 shows evacuees from Afghanistan as they arrive in an Airbus A400 transport aircraft of the German Air Force Luftwaffe in Tashkent, Uzbekistan. Photo: Marc Tessensohn/Twitter @Bw_Einsatz/Handout via Reuters

The US did not even consider the alternative, of leaving squadrons of its own air force at Bagram and a few other strategic air bases to provide air support for the Afghan army, although it has kept and continues to keep it there to facilitate the pullout of the remaining American troops.

In the face of this rampant, racist colonialism, can anyone blame Ghani for deciding that he would not be a party to Afghans shedding still more of other Afghans’ blood, only to ensure a slightly less humiliating exit for the Americans from Afghanistan? Whether this was his intention all along or not, far from betraying his people, Ghani has saved thousands, perhaps tens of thousands, of lives, and prevented a third destruction of Kabul in 30 years.

In fact, seeing the speed with which Ghani surrendered Kabul, it cannot be ruled out that the Taliban’s lightning advance was also facilitated by the government having decided, secretly, to avoid a war over other cities as well. Ghani may also have been motivated by the hope, probably well-founded, that an army which enters a city peacefully will  behave far more responsibly towards its civilians and not indulge in the pillage, murder and rape that usually follows, because it will be relatively free of the bloodlust that the stress of conflict, fear of death and the injury and death of comrades brings out in soldiers.

The real losers in Afghanistan – the sacrificial victims of Ghani’s surrender – will be members of Afghanistan’s still renascent but rapidly growing civil society, who had trusted the ISAF’s promise to create a peaceful and free society. These are the people TV has shown clambering onto the few civilian aircraft still leaving Kabul on Monday. In numerical terms they may be few. But the blow to human freedom that their exit or, worse still, incarceration and death will inflict upon Afghan liberals’ struggle for freedom will be humanity’s real loss.

It is one that this poor, benighted, country will not recover from during our lifetimes. The duty of the rest of the world today is therefore to provide the sanctuary in which the Afghan liberal spirit can survive. India has been the favoured destination of Afghan refugees since the overthrow of King Zahir Shah. The Narendra Modi government can still redeem itself if it opens India’s doors to the new wave of refugees that is now developing, once more.