Under the Afghanistan constitution 28% of seats in the lower house of parliament are reserved for women. But female candidates say Afghanistan's patriarchal culture means they face a battle to be heard even if they win. 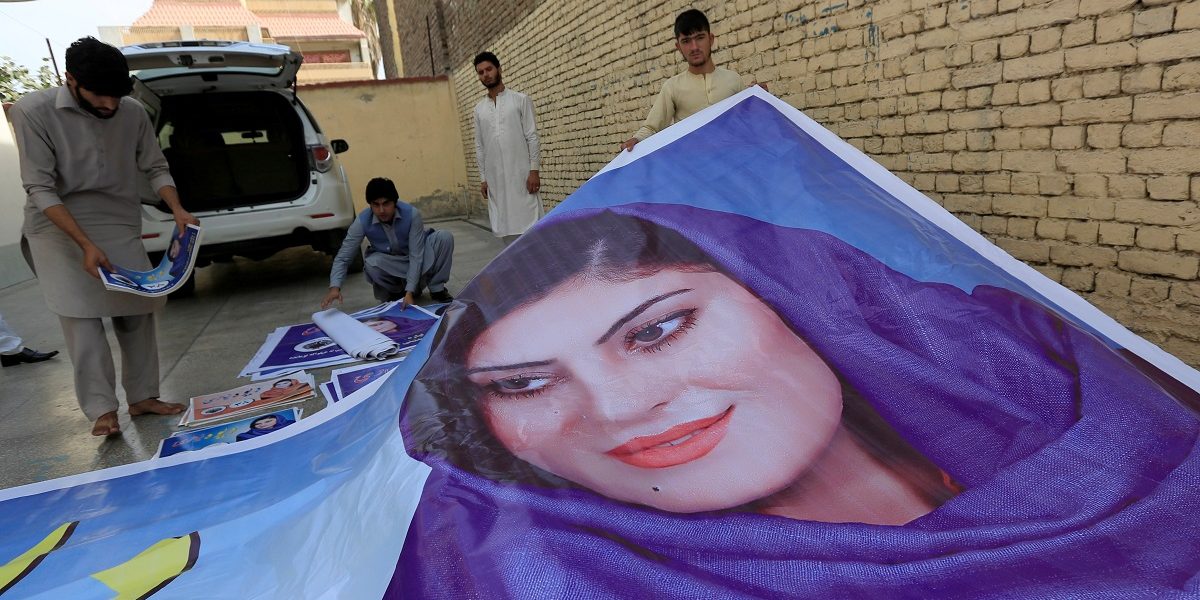 Supporters of female Afghan parliamentary election candidate, Dewa Niazai, prepare to install a poster of her during a election campaign in Jalalabad, Afghanistan October 4, 2018. Credit: Reuters/Parwiz

Kabul: More female candidates than ever are set to contest Afghanistan’s upcoming parliamentary election, braving violence and opposition from social conservatives in a campaign seen as a test of the war-torn nation’s democratic institutions.

“Elections in my country are not just about victory or defeat,” said Dewa Niazai, a 26 year-old candidate from the eastern province of Nangarhar, who holds a degree in computer science from India. “It is about launching a small-scale war. I can get killed, injured or abducted.”

Niazai is one of the 417 women candidates contesting seats across the country, despite deadly suicide attacks on election rallies and offices apparently aimed at forcing voters to boycott the vote scheduled for October 20.

She says she wants to be a voice for uneducated women who are not represented in parliament and to defend girls’ rights to education – Islamic State has blown up several girls’ schools in her Nangarhar constituency.

The growing involvement of women has been welcomed by the UN and other international bodies, which see the elections as a vital step in building trust in democratic processes.

Campaigning is fraught with risks regardless of gender. Nine candidates, including one woman, have been killed in separate attacks. Another two have been abducted, and four others have been wounded by hardline Islamist militants, election officials said.

Last week a blast at an election rally of a woman candidate in the northeastern province of Takhar killed 22 people and wounded 35. 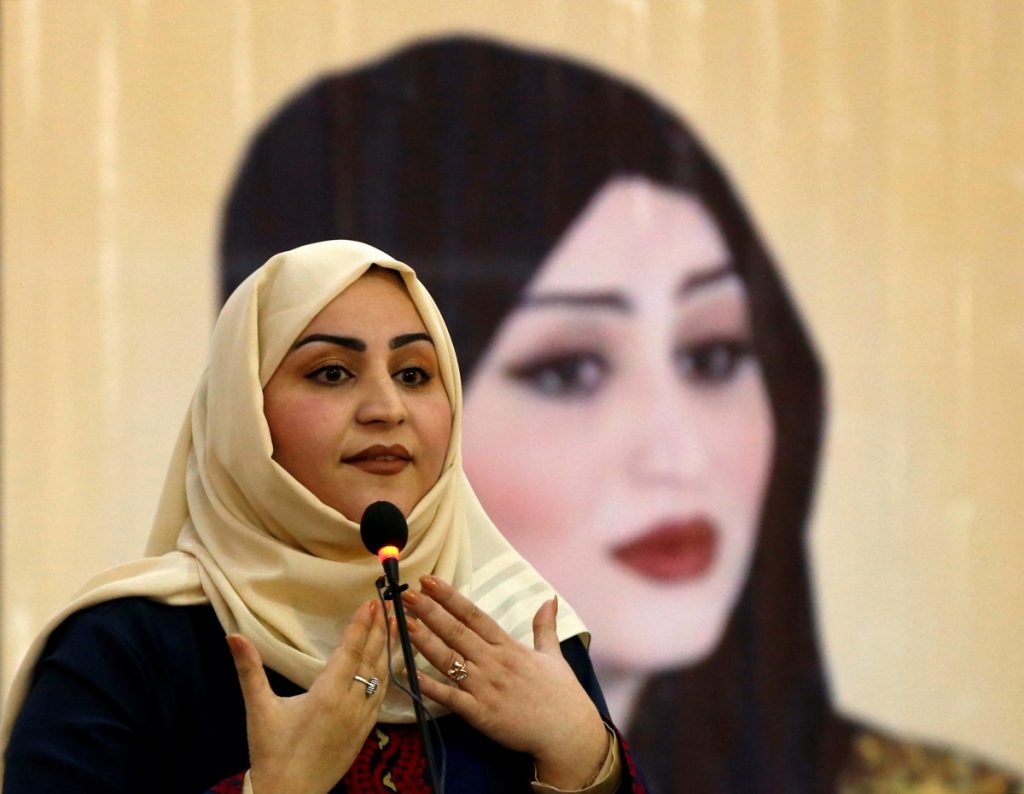 Nazifa Yousuf Bek, the female candidate, was standing about ten metres away when the explosion occurred.

“My supporters were waiting to listen to my speech but in a few seconds I was surrounded by their bodies,” the 32-year-old teacher told Reuters. “I am shaken but I am also determined to continue the election campaign. This is my responsibility.”

For women, there are additional challenges, said Maria Bashir, Afghanistan’s first female prosecutor from Herat province, who like other women candidates interviewed by Reuters had until recently never seriously contemplated entering politics.

“In comparison with male candidates, women have more problems in the election race … insecurity and harassment inhibit women‘s mobility and justify family restrictions,” she said.

Echoing other women candidates who spoke to Reuters, Bashir says she is standing for election after growing dismayed with the direction of the country, starting with the failure of the government to improve security or safeguard women‘s rights. 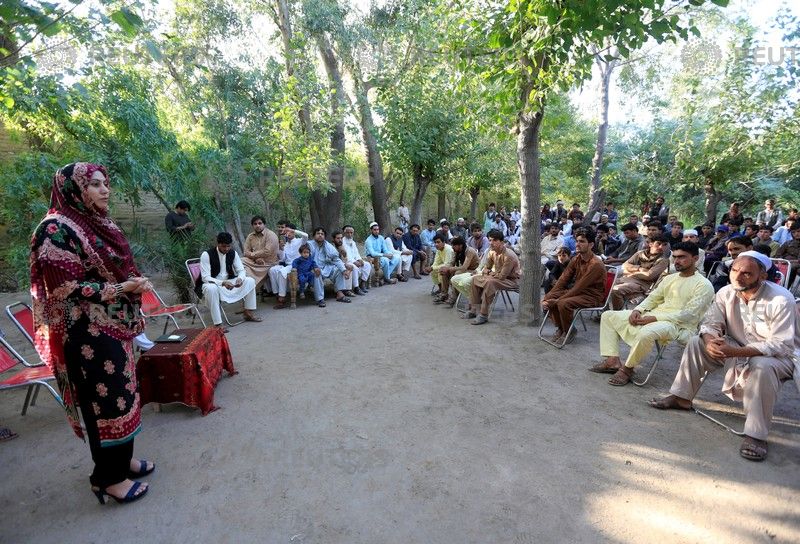 Unable to hold open rallies because of security concerns, Bashir invites voters to attend political discussions at her home and travels around the city at night to distribute publicity pamphlets and encourage voters to cast their ballot.

Sabri Andar, the only female candidate with disabilities, is contesting a seat in Kabul. She said her main focus would be on ensuring rights legislation was not ignored.

“Laws about equality exist on paper but they are yet to implemented,” she said. “As a lawmaker I want to ensure we practice what is written in our constitution.”

Under the constitution written after the austere rule of the Taliban was ended by US-backed Afghan forces in 2001, at least 68 of the 250 seats in the lower house of parliament are reserved for women. The quota means that Afghanistan fares better in a simple measure of female representation in the legislature than some Western nations – 28% of seats in the lower house are currently held by women, eight points higher than the US Congress.

But female candidates campaigning in their constituencies say Afghanistan’s patriarchal culture means they face a battle to be heard even if they win.

“We are trained to dress in a way that is acceptable to men, we talk in a way that does not anger men and, in politics, we are expected to appease them to stay relevant,” said Masooda Jalal, a former minister of women‘s affairs.

As well as facing sexual harassment, a regular problem that is rarely discussed openly because of strict social taboos, many women MPs complain they are not taken seriously by their male counterparts.

Women in positions of authority said they were often perceived as puppets who can procure funds from international aid groups committed to promoting gender equality.

Rights group activists in Kabul said more than three dozen bills drafted to strengthen the existing laws to safeguard the rights of millions of Afghan women were pending before the parliament but have not been allotted time for debate.

“Females candidates win elections with the help of powerful male politicians who in turn expects them to work as stooges in the parliament, rarely allowing them to have an independent opinion,” said Stanekzai.