'His (Wickremesinghe's) decision to follow in the footsteps of his predecessors is deeply alarming and does not offer the prospect of Sri Lanka progressing beyond the current crisis it is in,' the statement read. 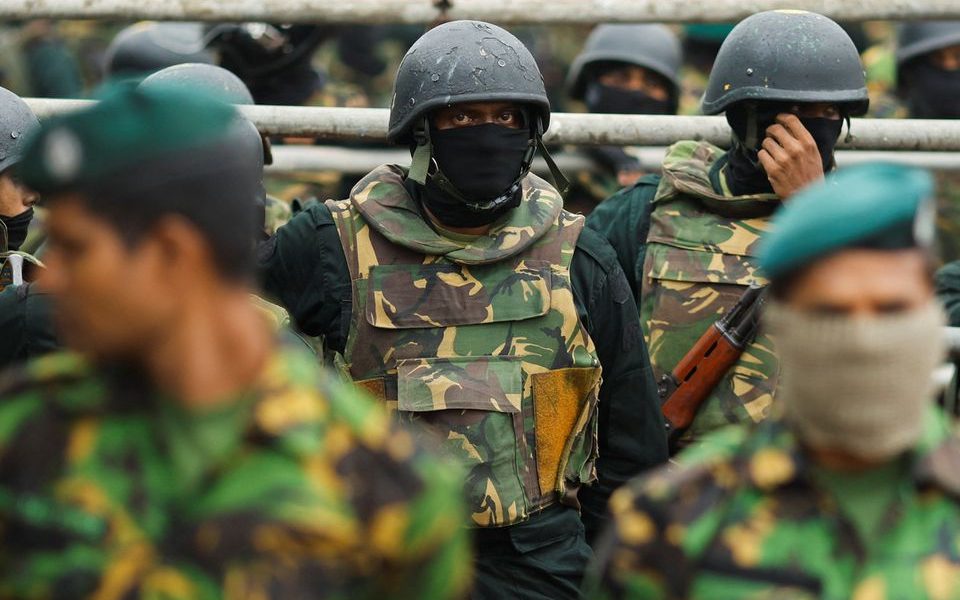 Security personnel stand guard near the Presidential Secretariat after a raid on an anti-government protest camp early on Friday, amid the country's economic crisis, in Colombo, Sri Lanka July 22, 2022. Photo: Reuters/Adnan Abidi

New Delhi: A group of over 150 international academics recently issued a statement condemning the crackdown on protesters in Sri Lanka on July 22, a day after new President Ranil Wickremesinghe took office.

Sri Lankan security forces raided the protest camp, set up in April on government grounds by angry citizens in response to the country’s unprecedented economic crisis which saw widespread shortages of food, fuel and other essentials, and cleared out a section of it early on July 22.

Reports had come in of soldiers in riot gear marching through the area of the ‘Gota Go Gama’ camp – a jibe at ousted President Gotabaya Rajapaksa – and tore down the rows of tents which flanked the main road.

This is what is going on @ Colombo right now. Is this what Colombo elites who supported @RW_UNP wanted? Look how your leader’s goons are assaulting civilians & media personnel.#lka #SriLanka #GoHomeRanil #HumanRightsViolations #HumanRights #අරගලයටජය pic.twitter.com/zQYq9IIaPz

Expressing their full condemnation of the state violence on the non-violent protesters, the academics, in the statement, noted that they were “aghast at reports that five of the protestors were abducted and tortured by security force personnel; violently beaten, forced to kneel on rocks and perform extremely tedious exercises whilst being threatened with death if they tried to escape.”

“Nine protest leaders were also arbitrarily arrested and detained by the police,” the statement read.

The academics also took note of the fact that the crackdown on the protesters came less than a day after incumbent President Wickremesinghe took charge, calling it shocking and saying that it “sends distressing signals of his method of governance”.

Protesters had decried Wickremesinghe election as President as he is seen as being close to the Rajapaksas, and had feared a crackdown after he assumed office.

“Over the last several months the protestors have been inspiring and disciplined in exercising basic democratic rights to call attention to the crisis. This space for resistance has also been used for educational purposes, with a university and library, advancing knowledge to all groups of people. The reference to protestors as ‘fascist’ is totally inaccurate, inappropriate and damaging; it weaponises the term to provide an excuse for the use of extreme force,” the statement reads.

With respect to the comment on “fascists”. The statement was referring to Wickremesinghe first public address after being sworn in as President, wherein he had called for an end to the “fascist threat to democracy” in the country and vowing to “restore normalcy”.

The statement described the crackdown on protesters as Wickremesinghe “following in the footsteps of his predecessors” and called it “deeply alarming”, noting how it adversely portrays the prospects the country is facing vis-a-vis its leadership.

“It is disheartening and telling that one of his first actions in office was to attack the people rather than take steps to address the suffering of the people,” the statement read.

As such, the statement laid out the demands of the undersigned academics, chief among them being for the Wickremesinghe government to desist from the use of force against the non-violent protesters and “reduce the current extreme military presence around the protest site at the Galle Face Green in Colombo and around the country including the north and east”.

Further, the statement called on the government to investigate the reports of the use of extreme force and torture against the protesters and hold those responsible for the same to account.

“The Sri Lankan constitution guarantees Sri Lankans fundamental rights including freedom of speech, expression and peaceful assembly; in addition, these are internationally guaranteed rights which Sri Lanka is committed to protect,” the statement concludes.

The government’s crackdown had garnered widespread backlash, even from the international community, with the American ambassador to Sri Lanka Julie Chung and British high commissioner to Sri Lanka Sarah Hulton expressing their concerns over the violence online.

Deeply concerned about actions taken against protestors at Galle Face in the middle of the night. We urge restraint by authorities & immediate access to medical attention for those injured.

Very concerned about reports from the Galle Face protest site. We have made clear the importance of the right to peaceful protest

Following the criticism, Wickremesinghe told Colombo-based foreign envoys that his government would allow non-violent protests in the country to continue.

“President Ranil Wickremesinghe has reaffirmed Sri Lanka’s commitment to upholding the rights of peaceful, non–violent assembly,” a statement from his office read.

Below is a full list of academics who signed the statement condemning the violence against the protesters: