A Posh Locality in Karachi Is Facing Water Shortage

According to Karachi Water and Sewerage Board, the city is receiving 55% less water than it needs.

Arising tide lifts all boats, a sage once said. Karachi’s citizens have a local equivalent: a receding water supply leaves everyone parched. Water shortage in some of the city’s poshest areas is as acute as it is in some of its poorest neighbourhoods.

Take, for instance, the eight phases of Defence Housing Authority (DHA). Spread over an area of 8,797 acres, they are among the most coveted parcels of real estate in the whole of Pakistan. Their 605 kilometre-long water supply network will be only 80 kilometres short of connecting Karachi with Quetta if it is stretched along a straight line. It is also as dry as the landscape between the two cities.

Khurram Baig receives piped water so rarely at his residence in Phase 6 that he always needs to back it up through other means. His family, he says, uses water conservatively but he still has to purchase 5,000 to 6,000 gallons of water every month. This, according to him, has a monthly price tag of 10,000 rupees.

Baig, a middle-aged man who works as a freelance journalist, says the money he spends on buying water does not get him any waiver on the water taxes he pays. These taxes – 12,000 rupees per year – are received by the Cantonment Board Clifton (CBC), a semi-elected civic agency that supplies different urban amenities to residential and commercial localities within the limits of the Clifton garrison area which includes DHA.

As per CBC’s own water distribution formula, every house that has five residents and two servants should get 210 gallons of water each day and a flat that houses five people must receive 150 gallons of water a day. Most residential units never get this amount, says Baig.

To address the shortage, CBC has made an additional arrangement. Bowsers containing 1,000 gallons of water are supplied at a subsidised rate of 500 rupees per bowser to those households that do not get their allotted amount of water. Each house can get as many as three bowsers a month.

On paper, this looks easy. In practice, surveys have to be conducted by the CBC staff to gauge if a house is actually not getting its sanctioned water supply. These surveys can take long. If they verify shortage in water supply, the next step is to buy a subsidised bowser. No one gets one automatically. The process involves convincing and cajoling a number of CBC officials. Most DHA residents do not have time for all that.

Some of them have found shortcuts. Baig, for instance, pays a CBC bowser driver – 1,000 rupees extra for each bowser delivered – and gets as much water as he needs.

Others are constrained to buy water from private suppliers who charge as much as 6,000 rupees for a 3,000-gallon water tanker. Not everyone can pay this amount happily. “Every DHA resident is not a billionaire,” says a disgruntled dweller of the neighbourhood. Retired people and widows also have their houses here. They cannot easily afford water at such exorbitant rates.”

The Defence Society Residents Association, a forum of 2,388 homeowners, blames water shortage on CBC’s inability to handle its supply infrastructure. Pipelines are damaged and water is stolen from them as they pass through poorer areas within and around the DHA, complains Sharfuddin Memon, who heads the association. In spite of the fact that “CBC collects heavy water taxes from DHA residents,” he says, “it has failed to initiate major projects to improve its supply system.” 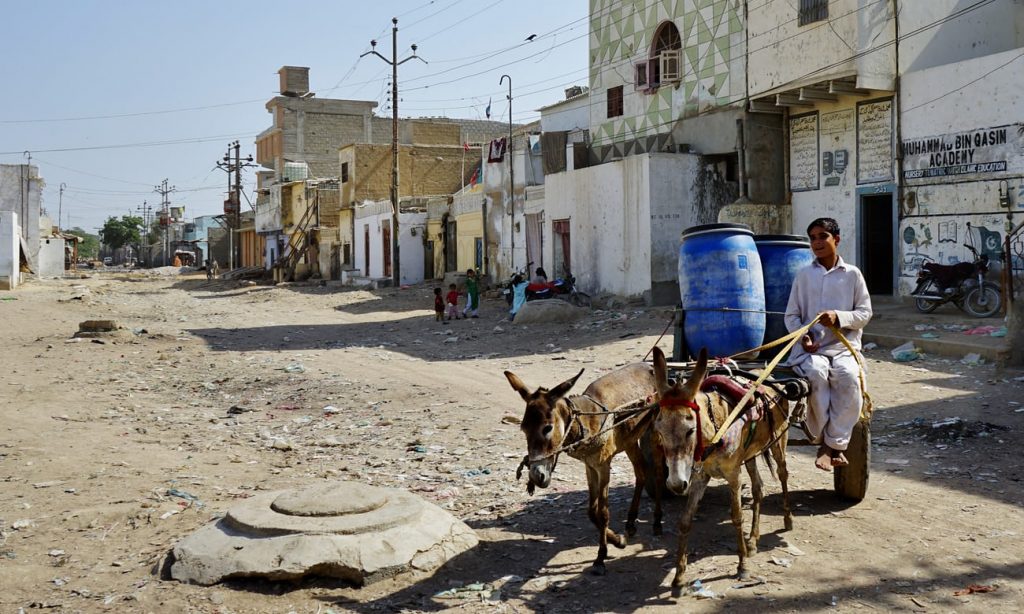 There are two main types of CBC’s water consumers: individual households, shops and apartment buildings and a bulk consumer — DHA. Water distributed by CBC is received from the Karachi Water and Sewerage Board (KWSB), a government-run agency. Under a memorandum of understanding signed in 1999, the former should get nine million gallons of water per day from the latter.

Officials at the CBC say lack of investment in the supply system is not to be blamed for water shortage. They acknowledge that the water supply infrastructure in their jurisdiction is outdated and claim they have spent 50 million rupees to replace old pipelines and make other improvements during the last couple of years alone. Spending more money is not possible because there is no money available, says Aziz Suharwardy, CBC’s vice president. “We already face a loss of over 500 million rupees per annum under the head of water supply.”

The real reason for water shortage, according to him, is that the CBC is not getting all the water that it should. “We are getting only six million gallons of water per day,” says Suharwardy. This suggests a shortage of three million gallons each day.

He also complains of large-scale water theft and blames it on the way water is provided to DHA. Three connections – one in Chakra Goth in Korangi area, the other in Zamzama in DHA Phase 5 and the third at Kala Pul on Korangi Road – are used for supplying water to DHA. The largest of them provides 4.473 million gallons of water each day and the other two together supply around one million gallons of water a day — as per the data posted on CBC’s website.

The shortest distance between DHA’s outermost limits and its largest water source in Chakra Goth is five kilometres. The pipeline connecting the two points passes through many informal settlements whose residents steal water both by bribing government officials and by setting up illegal connections. Water will not be stolen, says Suharwardy, if the main connection allocated to DHA is located within DHA.

Officials at KWSB say checking water theft is not their responsibility. The maintenance and surveillance of pipelines is CBC’s mandate, says Zafar Ali Palijo, the KWSB’s chief engineer for bulk water supply.

He also says CBC is getting all the water it must —except for a small fraction. Whatever shortfall that is there is because there is an overall shortage in Karachi, he adds.

One possible solution for DHA’s water woes is to make a long dysfunctional seawater desalination plant operational. Sources in CBC say the DHA administration has been giving them assurances for nine years that a private contractor to run the plant, installed on the southeastern edge of Phase 8, will be arranged soon. These promises are yet to materialise, they say.

Major (retd) Aurangzeb Unar, a DHA spokesperson, refuses to answer any queries. “The issue is under the water commission’s consideration which is why I will not comment on it,” he says, referring to a probe body set up by the Supreme Court to look into Karachi’s water and sanitation problems.

This perhaps is emblematic of how Karachi is run by its myriad administrators: shift the blame and responsibility to someone else; if you cannot, then find a perfect excuse to avoid an answer.

This article was originally published in Herald’s June 2018 issue.