Prime Minister Shinzo Abe called the attack in the city of Kyoto "too appalling for words" and offered condolences.

Tokyo: A man shouted “die” as he doused an animation studio with fuel and set it ablaze in Japan on Thursday, public broadcaster NHK said, killing at least 33 people in the nation’s worst mass murder in nearly two decades.

Prime Minister Shinzo Abe called the attack in the city of Kyoto – the latest grisly killing in a nation widely known for its low crime rates – “too appalling for words” and offered condolences.

Police detained a 41-year-old man who shouted “die” as he poured what appeared to be petrol around the three-storey Kyoto Animation building shortly after 10 am (0100 GMT), public broadcaster NHK reported.

Fire engulfed the building and white and black smoke billowed from its charred windows. It was Japan’s worst mass killing since a suspected arson attack in Tokyo in 2001.

Shiro Misaki, a 47-year old owner of a neighbourhood bar five minutes from studio, said he was driving nearby when he saw the thick smoke. An aerial view shows firefighters battling the fires at the site of the arson attack in Kyoto, western Japan on July 18, 2019. Photo: Kyodo/via REUTERS

“Policemen were stopping traffic and it was really hazy with smoke,” he said. “Even after I got back to my restaurant I could smell the smoke.”

The prime minister said the cause was arson.

“Today, many people were killed and wounded in an arson murder case in Kyoto,” Abe said in a post on Twitter. “It is too appalling for words.”

The motive was not yet known. The suspected arsonist was injured and was being treated in hospital, so police could not question him, NHK said.

Kyoto, some 450 kilometres west of Tokyo, is the ancient capital of Japan and major tourist draw for its ancient temples and cultural sites.

The dead were found on all three floors of the building, including in the studio, and on a staircase leading up to the roof, the fire department said. It was not clear if the roughly 10 people found dead on the staircase had been trying to escape. 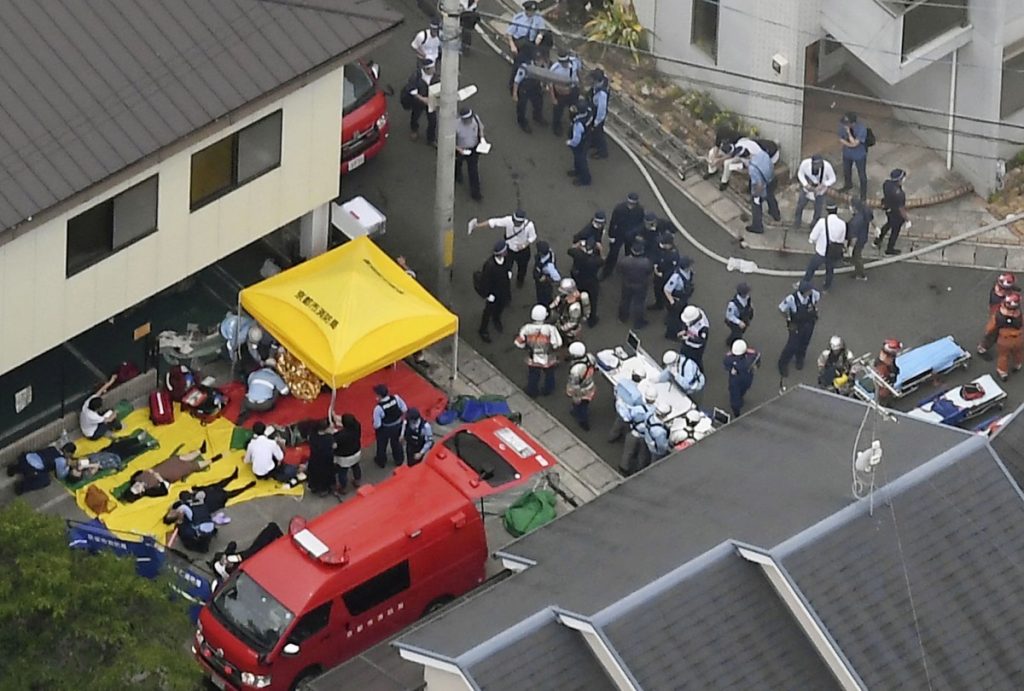 Thirty-six people had been taken to hospital by midday, the fire department said earlier, with 10 of them seriously injured.

By Thursday night the fire department said it had completed its search of the building.

Japanese animation, known as “anime”, includes television series and movies. A pillar of Japanese popular culture, it has become a major cultural export, winning fans around the world.

Kyoto Animation produces popular series such as the Sound! Euphonium. Its Free! Road to the World – The Dream movie is due for release this month.

“I am heartbroken,” Hideaki Hatta, the studio’s chief executive told reporters. “It is unbearable that the people who helped carry Japan’s animation industry were hurt and lost their lives in this way.”

There was an outpouring of support for the studio on Japanese-language social media, with some users posting pictures of animation. Many posted with the hashtag “#PrayForKyoani” – using an abbreviation for Kyoto Animation.

The studio has an outsized role in Japan’s animation industry that outstrips the list of works it has produced, said Tokyo-based film commentator Yuichi Maeda.

“It has a huge presence in animation here. To have this many people die at once will be a huge blow to the Japanese animation industry,” he said.

Violent crime is relatively rare in Japan but occasional high-profile incidents have shocked the country.

Less than two months ago, a knife-wielding man slashed at a group of schoolgirls at a bus stop in Kawasaki, just south of Tokyo, killing one girl and the father of another, while injuring more than a dozen children.

In 2016, a man armed with a knife broke into a facility for the disabled in a small town near Tokyo and killed 19 patients.