Why the Left Shouldn't Get Too Comfortable After Its JNU Victory

The recently concluded JNUSU elections should serve as a wake-up call and not a cause for celebration for the Left. 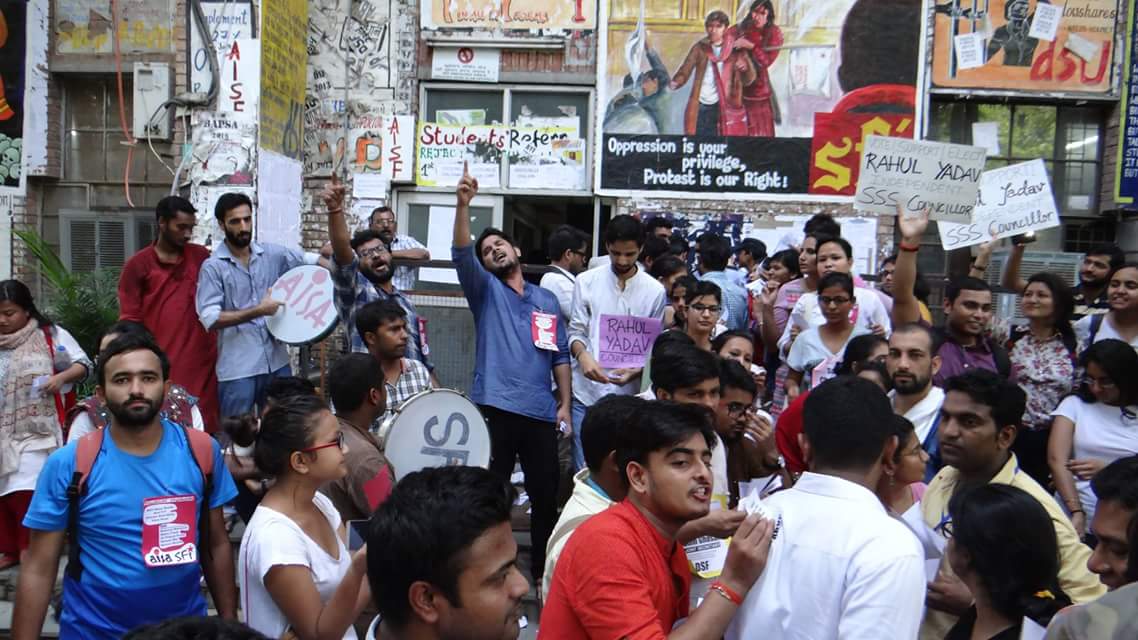 The central message of the Jawaharlal Nehru University Students’ Union (JNUSU) elections is that the ‘Stand With JNU’ campaign has decisively defeated the ‘Shut Down JNU’ campaign. The latter, which was launched by saffron pseudo-nationalists and their fellow travellers, wanted to destroy one of the finest universities in the country merely because it offended their sensibilities – JNU’s emphasis on the freedom of thought, the academic excellence that results from such freedom, the institution’s democratic culture of discussion and debate and the ideological hegemony of the Left were all too much for the ‘Shut Down JNU’ wallahs.

Catching up on JNU’s recent history

The RSS, through its publications, has been attacking JNU and its liberal intellectual culture for a long time, making the same allegations that were levelled against the university after the events of February 9, when some people allegedly shouted anti-India slogans at a public event. On November 3, 2015 Firstpost quoted an article published in the latest issue of RSS’ Hindi weekly publication Panchajanya, that described JNU as an institute “where nationalism is considered an offence”, Indian culture was presented in a “distorted way” and “removal of Army from Kashmir is supported” besides various other “anti-national activities” taking place there.

As I have previously written, Jawaharlal Nehru has always been a hate figure for the RSS. Little wonder then that Panchajanya wrote, “Jawahar Lal Nehru promoted higher educational and research institutions as factories of socialist ideology which could provide the intellectual input for his and later Indira Gandhi’s social and economic agenda.”

The article was written by somebody who claimed that he had studied at JNU and had “often heard JNU professors discuss means and measures to undermine national unity and culture at events organised by anti-national organisations”. His experiences made him realise that “JNU is home to a large chunk of anti-national groupings which have the singular aim of disintegrating India.”

The arrests and sedition charges failed to dampen the fighting spirit of JNU’s students and teachers and they began staging protests, aligning with Dalit students from Hyderabad University after Rohit Vemula’s suicide came to light. Very soon JNU’s critics launched a ‘Shut Down JNU’ campaign through social and mainstream media. Surprisingly, the movement even received support from some BJP members who should have known better given their educational backgrounds. For instance, BJP Rajya Sabha member Chandan Mitra, owner and chief editor of The Pioneer group of publications, started his career teaching history at Delhi University (DU) and has a Ph.D from Oxford University, but still lent his support to this campaign. Attacking JNU, he opined that “the self-destructive agitation at JNU has given the government the best opportunity to shut it down for ever, cut its financial losses, and get rid of a factory that produces only spongers and malcontents.” He mocked the agitating students by describing them as “subsidy-deprived.”

It was very clear that JNU was facing a very well-strategised attack from all sides – JNUSU officer bearers were arrested along with some other students, BJP lawyers physically attacked JNU students, teachers and media persons inside Patiala House, home minister Rajnath Singh commented on the need for tough action against ‘anti-national’ elements, and Smriti Irani, who was human resources development minister at the time, and vice-chancellor Jagadesh Kumar’s attitude towards these events had the university surrounded by criticism.

The JNUSU elections took place against this background. For many on campus, it was clear that ABVP and its Hindutva-based brand of nationalism posed the greatest danger to the university’s culture of free debates, discussions, disagreements and intellectual independence. The way the media created a nationalist frenzy and portrayed JNU as a centre of sedition made it even more imperative to safeguard JNU’s distinctive character by forging unity among its democratic and secular forces. However, Left as well as non-Left organisations were not able to look beyond their organisational interests and focus on the single issue of saving JNU as an institution. This resulted in AISA – the student wing of the Communist Party of India (Marxist-Leninist) – and SFI, which is linked to the CPI(M),  entering into an alliance without AISF, Kanhaiya Kumar’s parent organisation, which is the student wing of the Communist Party of India. Thus it was obvious that all was not well in the Left camp. Similarly, Democratic Students’ Federation (DSF), a splinter group of the SFI, too abstained from joining the alliance. This made it clear that the Left vote would split.

The unity that was forged between the Left and the Ambedkarites during the many months of struggle also amounted to little as the Birsa Ambedkar Phule Students’ Association (BAPSA) decided to confront the ‘savarnvad‘ (upper casteism) of the Left by contesting on its own. BAPSA obviously wanted to take advantage of the disarray in the Left camp. If the ABVP played up the identity politics of Hindutva, BAPSA tried to articulate its Dalit identity, asserting that only Dalits could understand their own problems and get them resolved. Convinced that it was going to win the elections, the two-year-old organisation went to the extent of equating red with saffron and bracketing the Left organisations with ABVP for representing people from the upper castes.

Despite the grave challenges faced by JNU, Anand Kumar and Yogendra Yadav too put up candidates from their Swaraj Abhiyan. In 1973, it was Kumar who brought all the anti-Left elements together under one umbrella organisation called Free Thinkers. This time too, he failed to appreciate that JNU was fighting for its survival and all freedom-loving students should be united in this fight against fascist tendencies. If one looks at the JNUSU election results, it seems that the ABVP has suffered a definitive defeat. In their youthful enthusiasm, students even took out a funeral procession for an ABVP effigy. However, a closer look reveals that the situation is not all that simple. The ABVP candidates for the office bearers’ posts have polled more than 1,000 votes, that is between 20 to 25% of the total votes polled. Had AISA and SFI not come together, ABVP could have easily won the election. It is obvious that their support base remains intact – even if it has not expanded after the nationwide frenzy that was created by RSS and its affiliates and was enthusiastically supported by dominant sections of the media.

An unusually high number of students have exercised their right to not vote for any candidate and tick NOTA on the ballot paper. In the case of the vice-presidential position, the number went up to 415. It shows that either these students are apolitical or are so disappointed with the existing political formations on campus that they do not wish to choose any of them. In a university where the average political consciousness of students is supposedly much higher than other places, such indifference is highly surprising. This should force student activists of all hues to think about its causes. Left organisation should be more worried than others about this phenomenon.

The recently concluded JNUSU elections do not give any reason to the victorious Left organisations to gloat over their success. In fact these results should serve as a wake-up call to them. The message is very clear to the victors as well as to other organisations like the DSF, AISF, BAPSA and SFS (Students for Swaraj). If they continue to fight among themselves and fail to forge the broadest possible group against the ABVP, they will not be able to repeat this feat in the future. There is a message for the ABVP too. In keeping with its ideology, it should feel free to  attack the Left and other political adversaries, but refrain from attacking the very institution where its members are studying. It brings to mind the famous episode from Kalidasa’s life where he was cutting the branch of the very tree he was perched on. Is it a coincidence that the ABVP won the sole councillor’s seat from the Centre for Sanskrit Studies?