This 'Untouchable' Caste is Indispensable to Kolkata Hospitals

The members of one clan of Doms, the caste of corpse burners, work in all the government morgues of Kolkata. They have held these jobs for two or three generations. Mallick weaves bamboo adeptly in a criss-cross pattern to make a tray (kulo) in front of the morgue. Most Doms, Sanjay Mallick included, live on the hospital complex because a dead body may come in at any time. Credit: Sohini C

When Sanjay Mallick was eight years old, his class teacher Mrs Mukherjee summoned his father to school for a meeting. It was the first time Mr Mallick had been called to his children’s school, and he was worried. His three elder boys had never made trouble, and Sanjay, the youngest, was no worse than other eight-year-old boys.

“Mrs. Mukherjee had asked the class to describe what our fathers did,” Sanjay recalled. “I stood up and said, ‘My father picks up dead bodies.’”

“I’ve never heard of a child speak of a parent with such pride,” Sanjay remembered Mrs Mukherjee told his father in that meeting. “You take care of this boy,” she told Mr Mallick. “Keep an eye on him when he enters that difficult age, don’t let him run wild.”

Sanjay’s father Rampreet’s job was to transport dead bodies to and from the morgue in Seth Sukhlal Karnani Memorial Hospital, Kolkata, now known as the Institute of Post Graduate Medical Education and Research (IPGMER). Despite the pride, Sanjay had other plans for himself. He wanted to study hospital administration after his bachelor’s degree. The hospital was a familiar environment and he liked it, but he wanted to be a boss.

“I was in the second year of my English honours degree at South City College when my father died. His pension stopped, the money in the household dried up,” Sanjay said. “When a vacancy was advertised in my father’s department, I applied. I got the job. It’s not what I’d planned, but it’s not bad.”

“I’ve known the hospital ever since I can remember. I got my father’s [residential] quarters, the one I grew up in with my brothers, where my mother and father lived and died.”

Sanjay was recruited as a dissection hall attendant at IPGMER’s SSKM Hospital, one of the busiest and most prestigious public hospitals in Kolkata. His job is to dissect cadavers under the instruction of medical science professors to help students understand the human anatomy. Since 2009, he has also served in the forensics department, which works on criminal cases.

“It was a promotion. Autopsies require more speed and efficiency, more experience, more character really,” Sanjay said. “Cadavers that are dissected for anatomy class are usually undamaged bodies, preserved in formalin. They smell cleaner. In forensics, there are bodies that have been fished out of lakes two days after the person drowned, decomposition may have set in.”

“You have to have seen something of the world to see these things. Fortitude you might say.”

Before his father, Sanjay’s grandfather also transported bodies to and from the morgue. Yet Sanjay carries the same designation as his father and grandfather before him: Dom.

Also read: The Toilet Cleaners of Lucknow – A Photo Essay

In the Hindu caste system, the Doms are corpse-burners. They wash the orifices and clean the body after death, dress it and prepare it for cremation.

The West Bengal government assigns the designation of Dom to all those who work on dead bodies, despite the term’s antiquated origins. In annual hospital reports, only the Doms are labelled by their caste name. This works also as a reservation: a government job restricted to communities listed as marginalised under India’s polarising system of positive discrimination.

Sanjay’s is a storied family in Kolkata. His male relatives work as Doms in every one of the five government hospitals in Kolkata that have morgues attached to them, including the police morgues for investigations into “unnatural deaths”. The entire staff of Kolkata’s government-run morgues comes from the Mallick clan. In each hospital, Sanjay has a cousin, an uncle or a nephew. And these jobs, like Sanjay’s, were held by their fathers and grandfathers before them.

How did this happen? “I’ve always worked with a Mallick in my career. I don’t know how it is, but I have,” said B.N. Kahali, the head of the forensic sciences department at IPGMER. “I started some 30 years ago. Before that I was a medical student. As far as I remember, the professor’s assistants were also Mallicks. We didn’t pay attention to these things really. We focused on medical science, on scientific findings. But I do know that we wouldn’t be able to do the work we do without the Doms.”

The Doms are indispensable to the medical system and society. When a body is brought into or released from the morgue, even family members often refuse to lift it from the gurney into the waiting ambulance or hearse. A Dom from the hospital is called to do the job.

When a Dom is not available, or cannot manage a body by himself, nobody steps forward to help. Some of this behaviour may be due to the inherent horror of death – but a large part is the legacy of the caste system. Not only was touching the dead considered ‘polluting’, those who worked with death – like the Doms – were deemed ‘untouchable’.

Sanjay often intervenes in these arguments, requesting people to help. “Arrey, the body has to be loaded in na,” he says to the most vocal refuser. “But I don’t know how to handle a body,” the recalcitrant Chief Refuser replies. “It’s nothing, just give me a hand,” Sanjay responds.

He is calm, gentle in his persuasion, but always regal. In the hospital complex, people gravitate towards him for directions or help though he carries no ID to suggest he is an employee. Like his father before him, Sanjay also attends meetings of the local ruling party. He puts up pictures of these on Facebook.

Invariably, quarrels about touching a body end with a Dom or two stepping up and doing the job when it is clear none else will. Then, everyone heaves a sigh of relief. This is why Sanjay is given residential quarters inside the hospital, in an area where real estate is limited and valuable. He, as with any Dom, is expected to be on duty all day and all night. A body can come in at any moment.

“In Maharashtra, we do not have a Dom classification,” said Indrajit Khandekar, a professor of forensic medical science at the Mahatma Gandhi Institute of Medical Science, Wardha. “The sweepers or attendants do the job of forensic assistants. They are mostly from the untouchable castes, Mahars and Bhangis. We don’t have trained medical technologists.”

“The section on forensics in the Code of Criminal Procedure was introduced in 1898, and has almost never been amended since then. Whatever few amendments have been made have not made their way to medical schools. So that’s 120 years and counting of one law.” 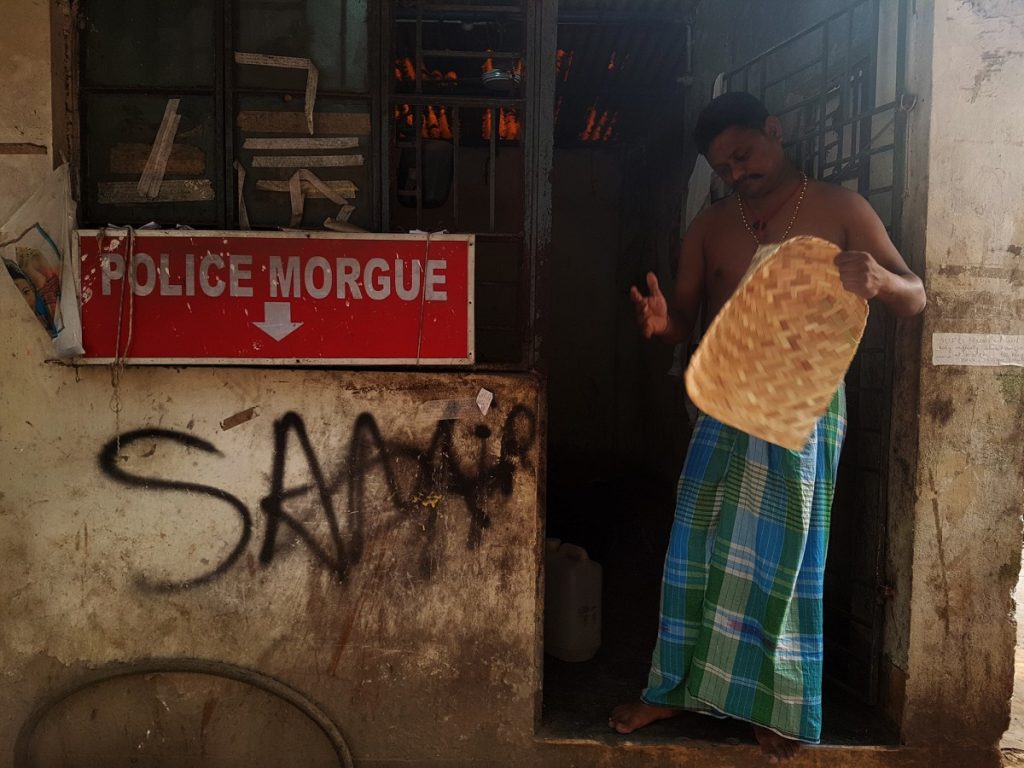 Sanjay Mallick, a Dom in PG hospital in Kolkata, displays a puja tray made of bamboo fibre that he has made. Credit: Sohini C

In 1836, Madhusudan Gupta first dissected a human cadaver in Asia at the Medical College and Hospital (MCH) in Kolkata. Outside the hospital, a crowd had gathered to protest this unholy act – a Brahmin touching a dead body – so the administration secured the gates and guarded them.

It is said that Fort William, the British settlement in Kolkata, performed a 50-gun salute to honour the achievement. It was a big moment, a member of the highest caste cutting open a dead body.

MCH is known to be the second Western medical school in India, after the French set up the École de Medicine, Puducherry, in 1822. In those years, dissections were conducted only to help medical students understand the human body. They were few, performed mostly by doctors and students, occasionally by their British instructors. Medical students were few and far between as well.

The need to handle cadavers in larger numbers likely arose in 1898, when the British instituted the forensic section of the Criminal Procedure Code. The police were now required to investigate unnatural deaths, including accidents, suicides and homicides, leading to a growing need for handlers to transport dead bodies. Perhaps this is when the hospitals first hired Doms. There were few doctors and medical e students. Besides, the doctors would dissect bodies, not lug them from place to place.

A curious contradiction took shape. As Western medical science was instituted in India, a traditional caste occupation was inducted into the hospital hierarchy. If there was a gun salute when the first Dom helped cut a cadaver, there is no mention of it in the history books.

“There is mention of us in the Mahabharata,” Sanjay said. “The story goes that when the battle of Kurukshetra was over, the gong to signal the end of the war could not be heard because our Dom guru Supan Sudarshan Bhakt was not invited by the Pandavas for the feast of celebration. When Krishna reminded Draupadi, and she invited our guru and fed him with care, the gong rang out on its own. You know, they say that no work can be complete without the Doms. It’s unique, this work of ours.” Death has been on my mind for a long time.

Late last year, my grandmother was diagnosed with advanced bowel cancer. At the beginning of this year, my father slipped into a coma with a failing liver. He received an emergency transplant from my mother, who donated 60% of her liver to him. I was in a distant city, sleepless, while my parents were in the intensive care unit.

Two days later, my grandmother died. When I received the news, I was told not to share it with my parents. On the telephone, my aunts said my grandmother’s body was soft hours after her death, that she felt like a baby in their hands as they bathed and dressed her in a sari for the cremation.

One day, I found myself lying to Sanjay, telling him that I bathed my grandmother after she passed. There was no rigor mortis, I said, she was soft like a baby.

The next day I told Sanjay I had lied. I didn’t see my grandmother when she died. I’m not sure why I lied. He listened to me, and nodded. Not a knowing nod but a sweet, earnest nod, like a schoolboy.

“Come to us on Sunday,” he said. “We are doing a bhoot (ghost) puja in the morgue. There is a way to end everything. Even ghosts need endings.”

“We know these things.”

This story first appeared in the South China Morning Post.

The reporting for this was done as part of the National Geographic Society and the Out of Eden Walk workshop in Kolkata.