The Mob Was Assaulting Us But the Police Simply Stood By: A Tanzanian Student's Trauma

The Tanzanian student recounts, for the first time in detail, the horror of being beaten by an angry mob in Bangalore and the casual response of the police. 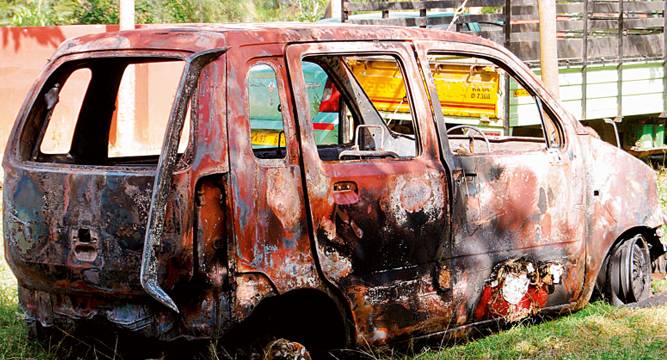 The burnt remains of the car in which the Tanzanian girl and her friends were travelling in Bengaluru. Credit: PTI

On Sunday night, Jessie (name changed) stepped out for a casual dinner with three of her Tanzanian friends. The 25-year-old, from Dar-es-Salam in Tanzania, had been living in Bengaluru for four years, and knew her way around the city. So they took out a red Wagon-R and headed out. The events of that night just two hours later, however, changed her life forever. Her love for the city, which she considered her home, came crashing down.

In an interview, the Tanzanian woman, who was assaulted by an angry mob In Bengaluru recently, spoke to The News Minute about the horror she underwent that night.

The 25-year-old from Dar es Salaam in Tanzania spoke about how she and three (male) friends were travelling in a red Wagon R car from Saptagiri in Hessarghatta towards Acharya College’s vicinity, to buy dinner.

Seeing a mob thrashing an African man on the road, they slowed down the car to enquire. This is when the angry mob targeted them and chased them in vehicles.

With the mob blocking their path, the Tanzanian students had to stop and get down from the car. While two fled the scene, Jessie and Hasheem were left behind.

The crowd beat up Hasheem while Jessie stood next to the car, rooted in fear. Someone then set the car on fire. A policeman nearby at Jessie’s request threw handful of sand to douse the fire, but refused to do anything further.

Another friend who arrived at the spot was also thrashed badly by the crowd. Though Jessie and the other Tanzanian tried to escape in a bus that had stopped at the bus stop, the crowd followed them into the bus, and chased them out.

In the melee, her clothes were torn, her t-shirt completely ripped apart. An Indian offered his shirt to her and was also shooed away from the place. By then some more Indians had started speaking up for the Tanzanians. An Iranian man finally led them away from the spot.

“Bengaluru was my home. I lived peacefully and loved India. I had a nice landlord, good neighbours. But that experience changed everything for me. I will stay here till my course finishes in June. I am determined to complete it and go back,” she said.

Editor’s note: The first version of this story had detailed quotes from the victim. But she was later not comfortable with the elaborate interview. Respecting her wishes, we have taken down the quotes, and retained only the crux of what she had narrated.

This article was originally published in The News Minute (www.thenewsminute.com)