Racism There, Communalism Here, But Our Day Will Come

The story of North America in the 1970s is not very different from what it is today. 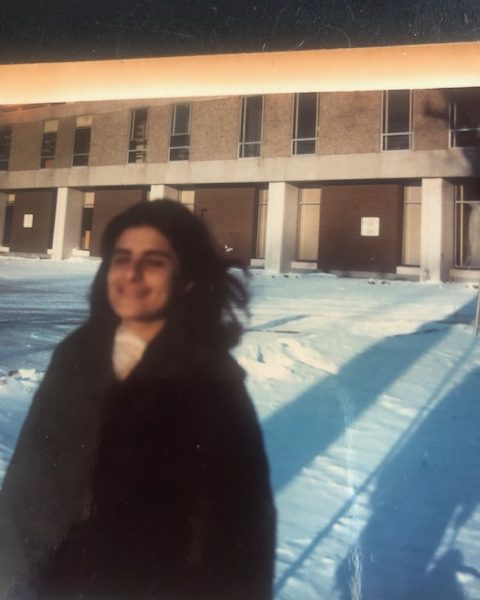 The author, Syeda Hameed, in Canada in the 1970s. Photo: Syed Hameed

On a bright winter morning, I was going to work, driving very carefully because the previous night’s heavy snow had not been cleared from the roads. It was a typical prairie winter morning in Canada, when the bright sun deceives one to think that the world outside is as warm as it appears from the windshield of the car. It was 1974. I was a sessional lecturer at the University of Alberta, where my husband was a professor at the business faculty. That world had offered every good thing to us, we had bought our first house and second car.

Suddenly, the car veered to a side and loose snow crunched beneath the wheels. I stepped on the brakes. The car stopped and I saw it was right in front of a school. The sign read Harry Ainlay High School. I had passed it many times so I knew my landmarks. I got out of the vehicle, wrapping my overcoat tightly against the chilly prairie wind. Some students were standing outside, 15 or 16-year-old girls and boys, eating, smoking and oblivious of the cold. Those days there were no mobile phones, so I looked around for a roadside phone booth to call my husband. There was none in sight.

I forgot to mention that the car I was driving was a second-hand Cadillac which a friend had given us for a trial run. It was leafy green and had a good music system. Like most immigrants from South Asia, I was playing Mehdi Hasan’s ghazals at the time, thinking longingly of mehfils back home, while negotiating the hard driving conditions of the prairie winter.

I don’t know whether it was my fake fur coat or second-hand Cadillac which attracted their attention. I saw a bunch of boys looking straight at me. I was not about to be scared of 16-year-old schoolboys, so I smiled and asked if there was a phone inside I could use. That one sentence of mine met with a deluge. Someone shouted, ‘You damn Paki, go back’. The group seemed to enjoy this phrase and took up the refrain. Suddenly, I found them flinging coins at me and the car. ‘Take the money and go’. Then came the leftovers of their sandwiches and muffins. In a shower, they landed on me and the top and bonnet of my car. ‘Why don’t you go, damn you!’ By now I had lost my courage and felt the warmth of tears over my frozen face.

What followed and how I was rescued does not need to be told here. It was the first blow to my self-esteem and self-confidence, with which I had entered this all white, conservative part of Western Canada. After this incident and its fallout, I was to spend another ten years there doing useful and challenging work but at that moment, the seeds of disillusionment had sunk into my frozen ground. In 1984, I headed home as if towards the comfort of the womb.

In the Canada of 1974, my neck was not placed under the knee of a muscled policeman for nine minutes. I was let off “easily”, just heckled. I was a “Paki” who was the target of teenagers of a high school in an upper-class neighbourhood in white North America. But this was the moment I experienced systemic, reflexive racism first hand.

In 2020, the story of North America is no different. For that matter in India too, the story is not different. The likes of me are targets. Some of us are tortured and lynched; our houses are burnt, our youth are booked under draconian laws. So what was then is also now, the difference is of degree. The world I have lived in for over seven decades has remained unevenly balanced until a gigantic affliction is poised over us as the great leveller.

This month, we are commemorating the 106 birth anniversary of film personality Khwaja Ahmed Abbas, a man who predicted these current conditions in the mid-1940s in the first realistic cinema in India, the classic film Dharti ke Lal produced under the IPTA banner. For all of us, blacks, browns and subalterns, the lyrics of one song from his 1957 film Rahi (about labourers employed in the tea gardens of Assam) written by his friend Prem Dhawan, holds out hope that Martin Luther King Jr spoke of in his immortal words, ‘I have a dream’: