Photo Essay: A Look at Signage in Contemporary Paharganj and Gole Market

While Paharganj is full of neon signage, Gole market is abundant with hand-painted lettering.

Processed with VSCO with p5 preset 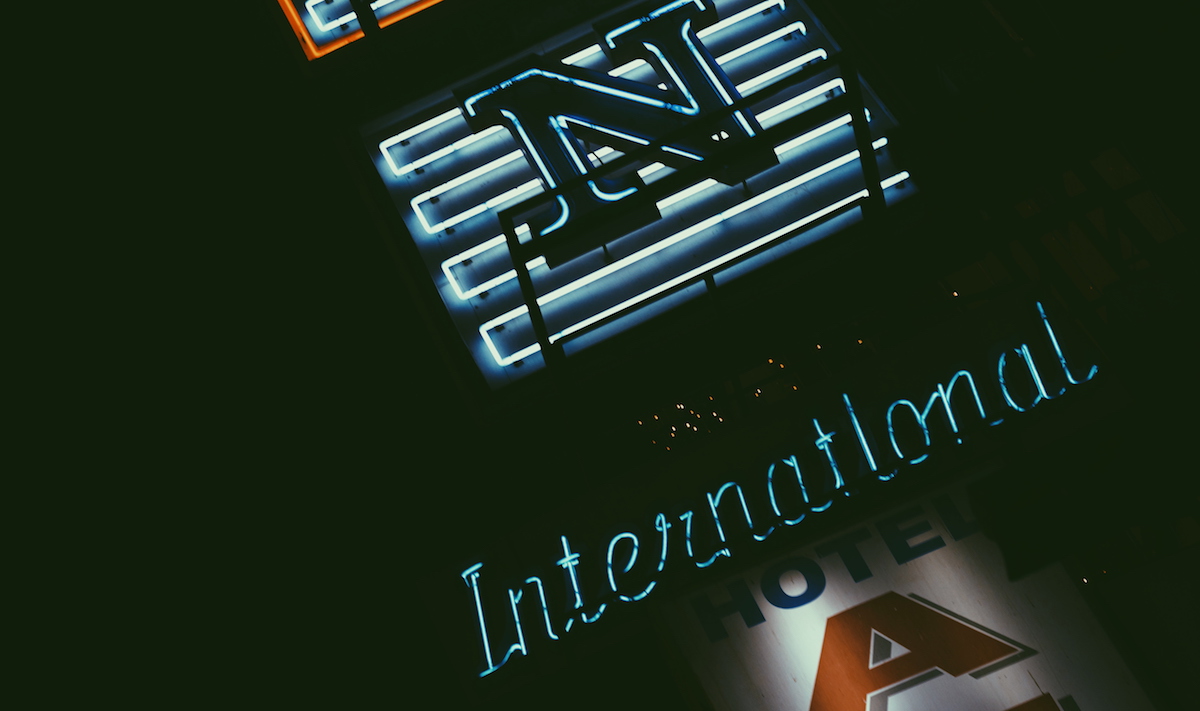 One of the many neon signs in chaotic Paharganj. The full sign says, ‘Aman International Hotel.’ For the name of the hotel, the neon is double lined for greater visibility and clarity.

Each city has its unique history of signboards installed across its length and breadth. As time travels, the signboards change in form and content, bearing testimony to the transformations in the life of a city. Unlike hand-painted lettering earlier, we now see abundant signs printed on flexes, a material that became a popular mode of advertising in the early 1990s. Flex banners are a cheaper and a faster medium of advertisement. Today, flex banners cost anywhere between Rs 12-60 per square feet. One will rarely find a hand-painted sign in a shopping mall – there are fewer painters left, hand-painted signs are relatively expensive and require more time to get ready. Neon signs are rare too as they are handcrafted – a practice requiring skilled artistry.

There is little in common between neon and hand-painted signs except that both forms of advertising and communication are slowly becoming extinct and are being replaced by flexes and LEDs.

In central Delhi’s Paharganj, to the west of the New Delhi Railway Station (NDLS), lies one of the highest concentrations of neon signs in the city. Paharganj means a “hilly neighbourhood”, so called because of its proximity to Raisina Hill.

Paharganj has been an important marketplace since the Mughal era. After the Partition in 1947, Paharganj saw an influx of people, mostly Hindu refugees from Pakistan who were allotted shops and small establishments in the area. In the 1970s, there was an influx of foreign tourists, which can be credited to the Hippie Trail – a name given to the overland journey taken by members of the hippie subculture and others from the 1950s till late 1970s – until various conflicts in the middle eastern countries such as Iran, Iraq and Israel led to stricter visa laws. These travellers would stop in Delhi and Paharganj’s close proximity to NDLS made it a convenient location for cheap stay and food. A lot of these tourists were Israelis who would come to India after completing their military transcription. This influx of people has shaped present-day Paharganj’s signage and typography. Hotels, small shops and bars put up signs to attract tourists who speak Hebrew, Russian, Japanese, Korean, Nepali, Malayalam, Bengali, among others. Paharganj has a unique labyrinth of signage, a combination of new, old and the almost extinct.

Over two km away from Paharganj is Gole market. A circular market designed by G. Bloomfield, it is one of the oldest surviving colonial markets of the city, and one which hasn’t absorbed modernism the way Paharganj has. The circular structure is presently undergoing restoration. The surrounding market has small functional shops ranging from cycle repair shops, food stores, kiryana shops, tea shops, and tailors and dry cleaners among others.

Abha Narain Lambah, a conservation architect and historic building consultant who has been commissioned by the New Delhi Municipal Corporation (NDMC) for the ongoing upgradation of the market, said, “Built as market at point Y [this refers to the geometric location of the market, which forms the intersection of three road segments, referred to formally as a Y junction], as a subsidiary market to the prime business centre of Connaught Place, this market was designed to serve the needs of the residential population, primarily centered around grain, milk, vegetable and general market as per the original drawings dating 1918 signed by G. Bloomfield on 26th July, 1918.” Lambah added that with the influx of refugees after Partition, the circular market was remodelled to accommodate more shops. “It is possible that at a later stage, the design was altered to incorporate a first floor, which was inserted within the existing high ceiling space of the building since the original drawings of 1918 indicated a single trussed volume for each shop. Over the years, the market became popular for stocking poultry, meat and fish.” The purpose for which the market was built has an implication of the how signage has evolved, presently heavily dominated by hand-painted lettering.

According to Rajneesh Oberoi, the current owner of Prakash Brothers, a bookshop that has occupied its current address since over 65 years, the New Delhi Municipal Corporation (NDMC) allotted a certain number of shops in Gole market for rent and ownership in 1952. One of these shops was given to Rajneesh’s father, which they still own today. The shop initially had a painted signboard, which they changed to a flex over 12 years ago since it was becoming difficult to find painters and the maintenance was tedious.

The NDMC doesn’t allow shops on the Bhagat Singh Marg to construct the first floor, according to Rajeev Sahni of Central Dry Cleaners. The streets adjacent and around the main road, however, see buildings upto three stories tall. Most shops in the area are now owned by the children of their founders who are engaged in the business their fathers and forefathers set up before them. Most of the shops are in the same condition they were in when they first opened for business; others are now shut. Franchises and modern brands haven’t set foot here. While neon signage is noticeable in Paharganj, Gole market is still home to hand painted lettering. 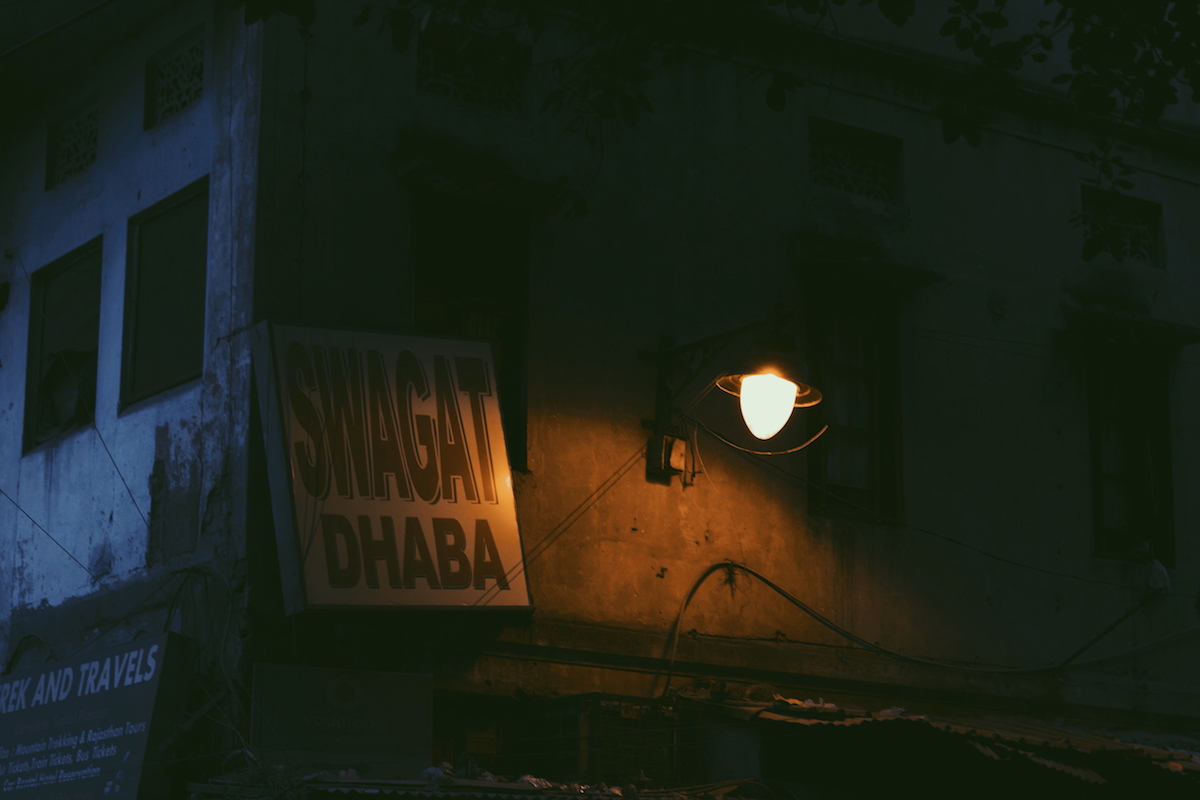 A printed flex signboard at one of Paharganj’s entrances. The sign reads “Swagat Dhaba”. 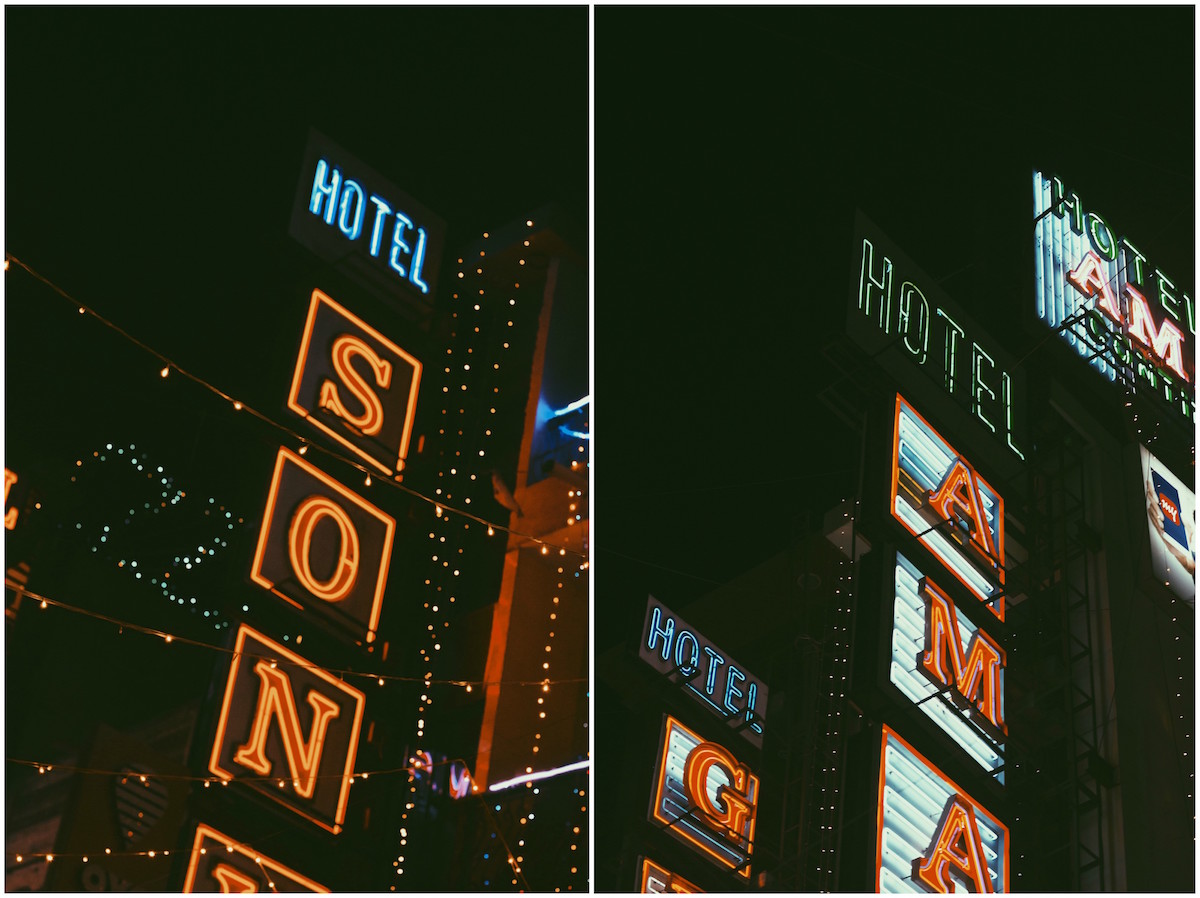 Horizontal signs with double lined letters are a common way of using neon in Paharganj. Using electrodes, when electricity is passed through a glass tube with neon gas, it glows into a bright red colour. To get the colour blue, glass tubes are filled with argon, for all other colours, the inside of the glass is coated with fluorescent powder. For instance, to get the colour pink, a glass tube will be coated with blue fluorescent powder. 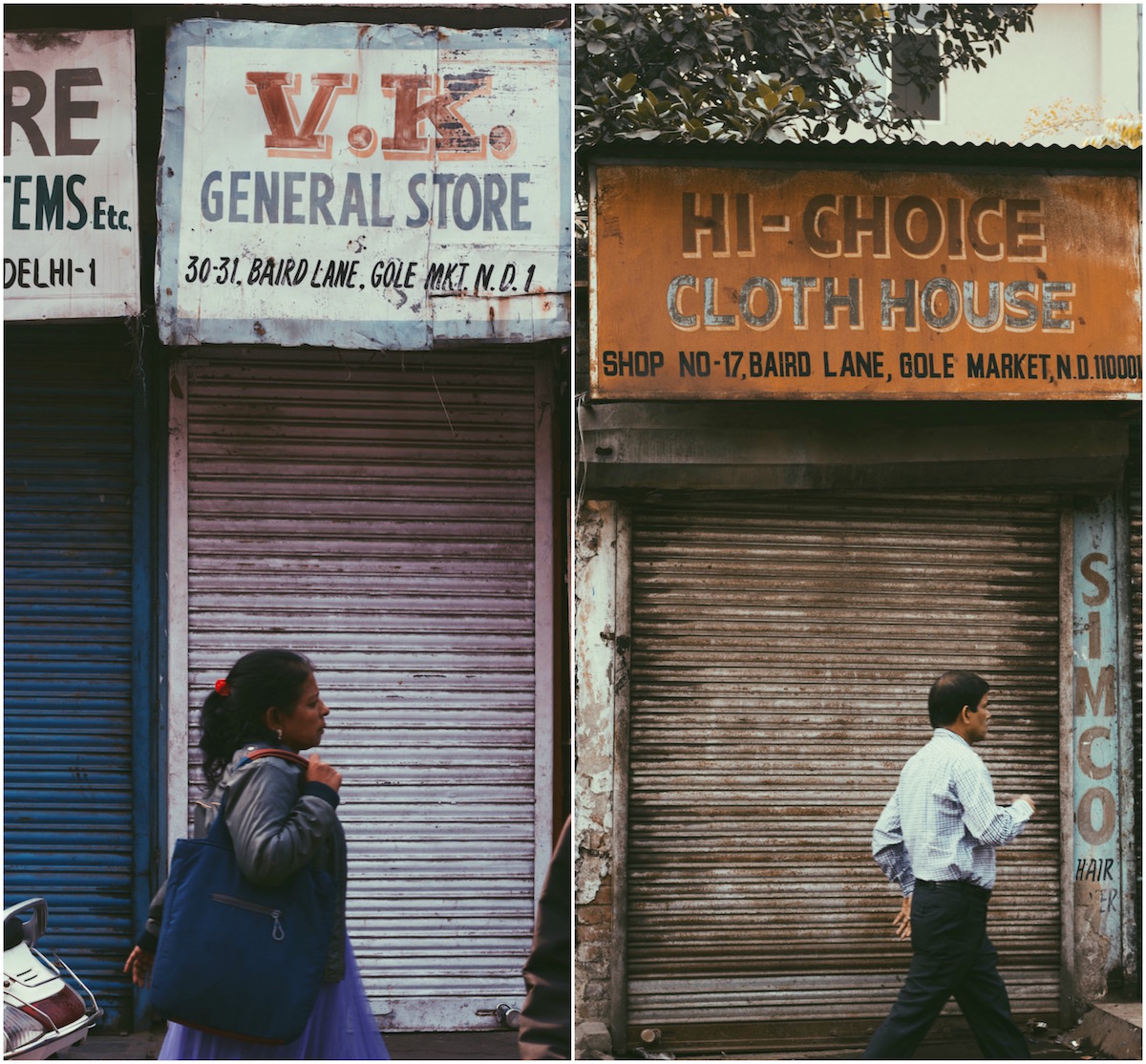 Left: The lettering featured in this sign, “V.K.” is a type of handpainted lettering referred to as the 3D extrude. Right: A man passes by a severely worn out signboard in Baird Lane, Gole Market on a Saturday morning. The painter here has used white paint to create a slight shadow for each letter. It also makes the letters look raised. 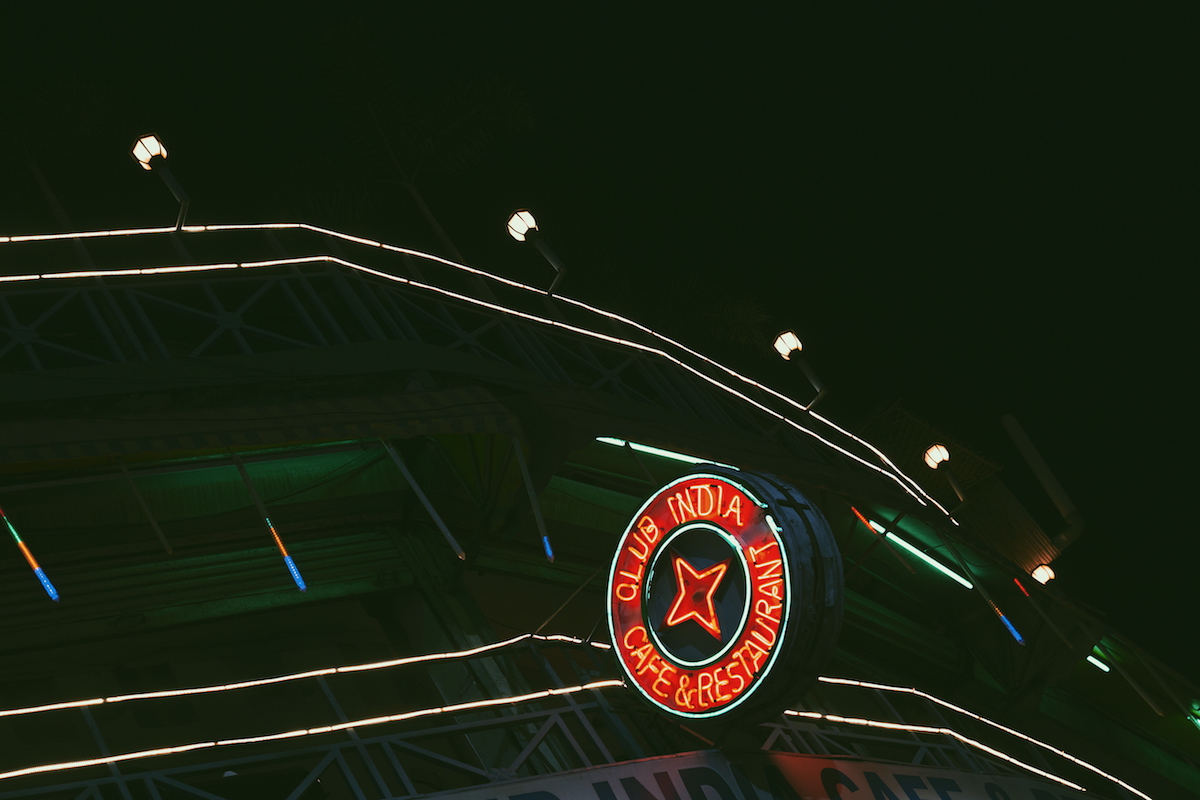 One of the only circular neon signs in Paharganj. The sign reads “Club India Cafe and Restaurant”. 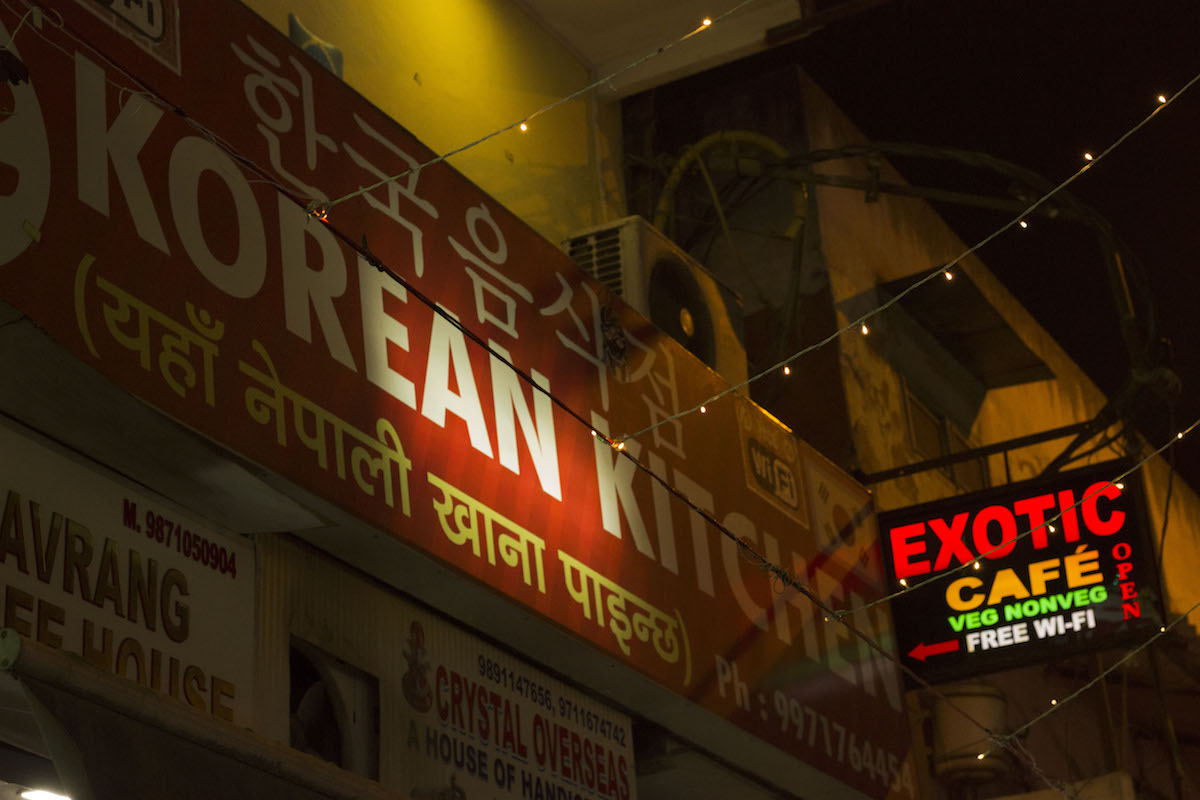 The last line on this flex sign is written in Nepali. The first is written in Korean, the first letter from the left is composed of three different components,  h-a-n,  pronounced as “Han” – each sound made by different elements of the same letter. 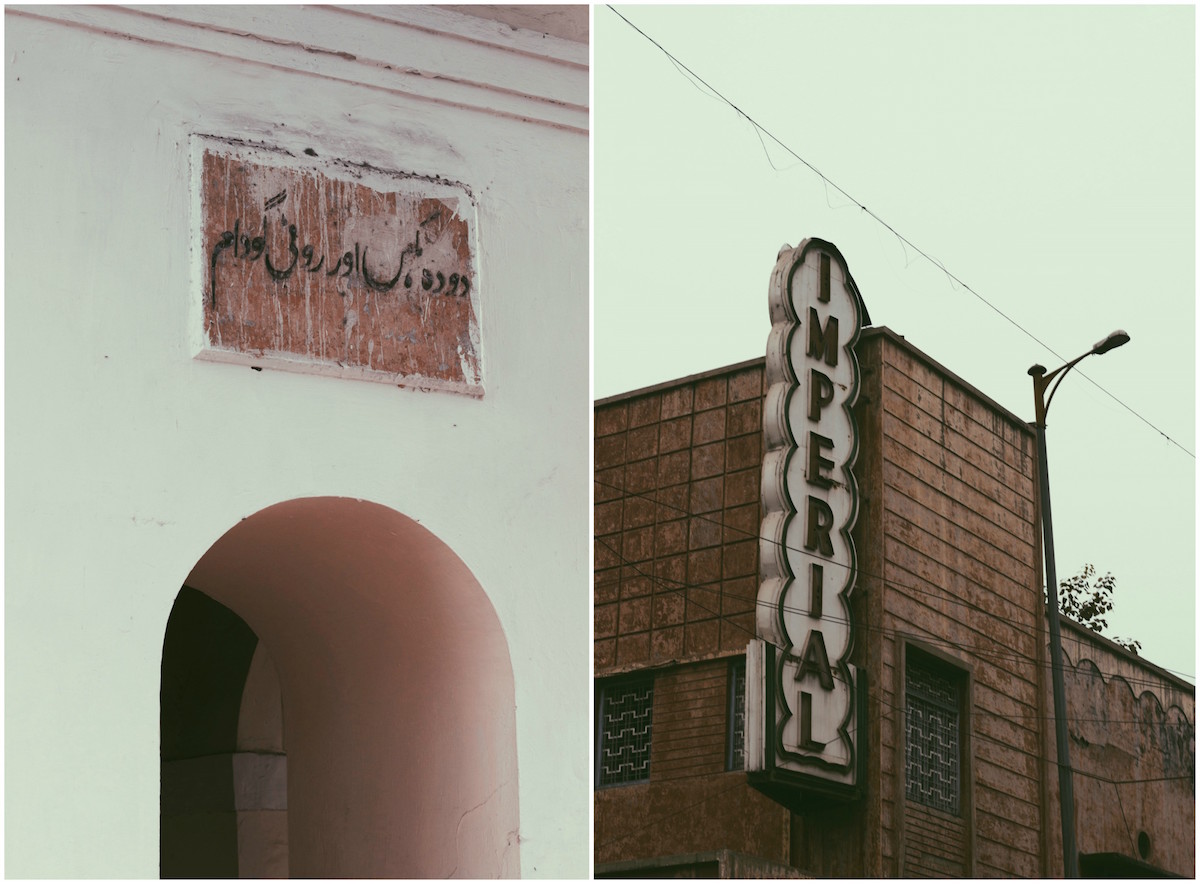 Left: An Urdu signboard that reads “Doodh, malai aur roti godaam.” Right: The Imperial Theatre in Paharganj, which was built in 1930 hosted screenings of films from the 1990s; the morning shows were reserved for ‘naughty’ English films. The cinema was shut down in 2015. The building and the sign remain as it is today – the sign is not switched on anymore. 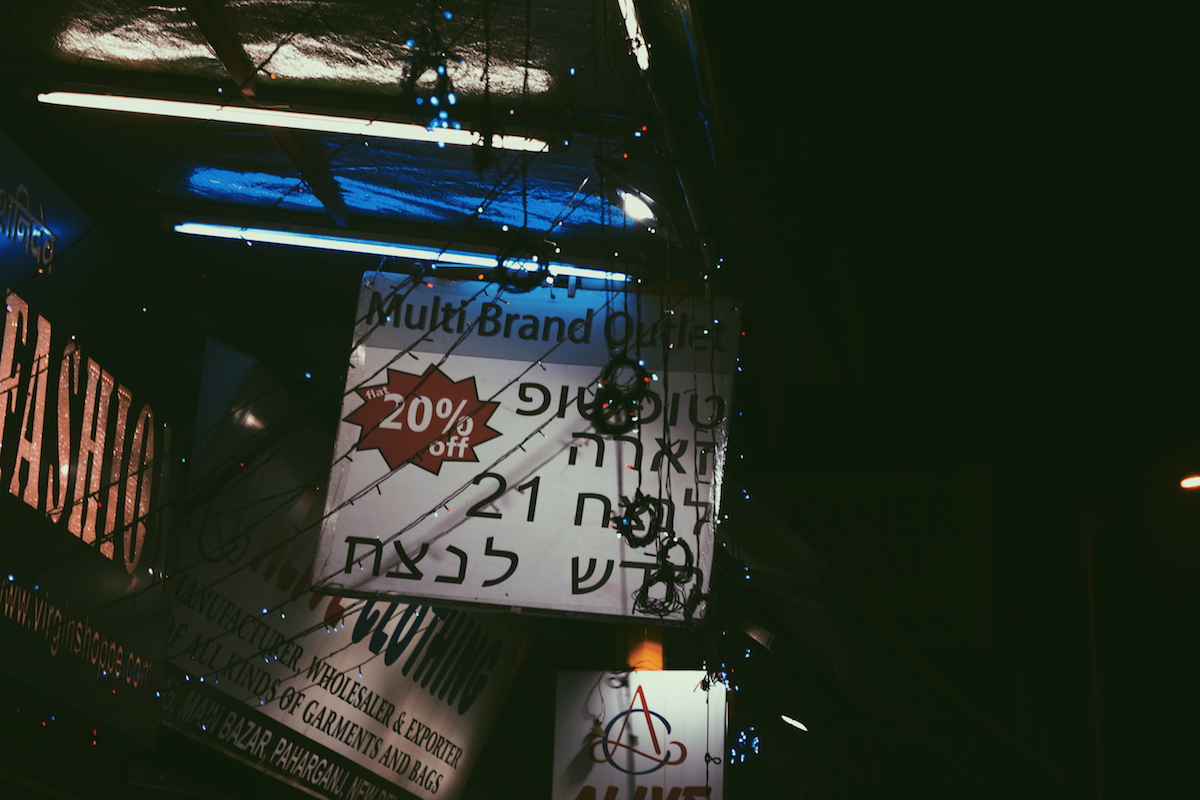 A signboard in Hebrew in Paharganj. 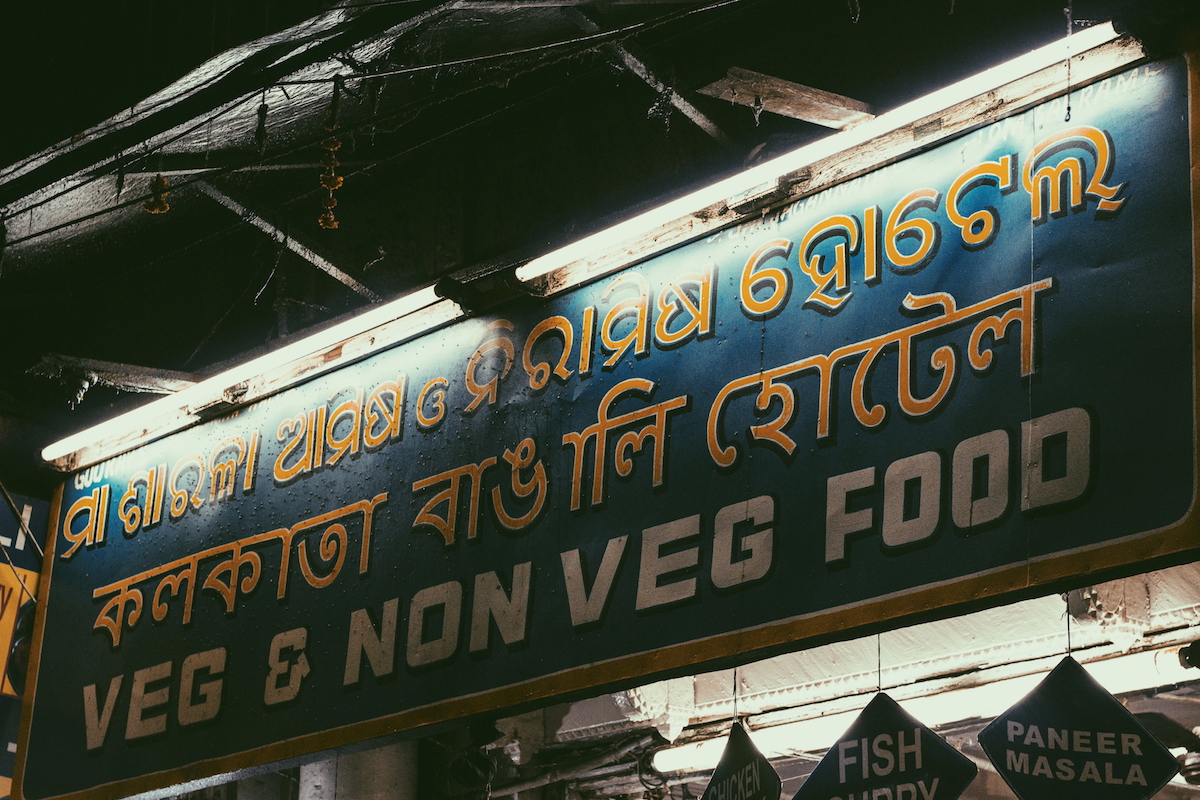 Signboard of a street food shop in Paharganj. The Odia (above) and Bengali (middle) text is in yellow, contrasting with the white English text. 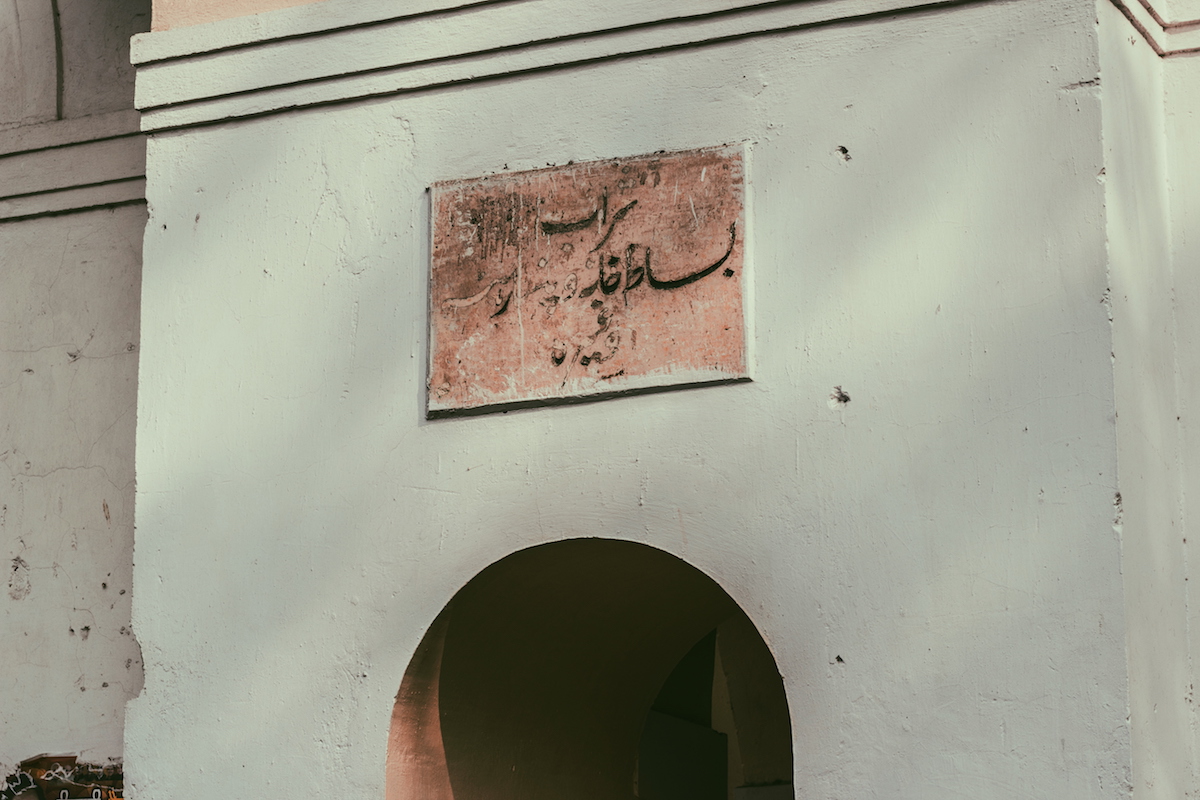 An Urdu sign in Gole Market. Sharaab, it says on the top, for wine. 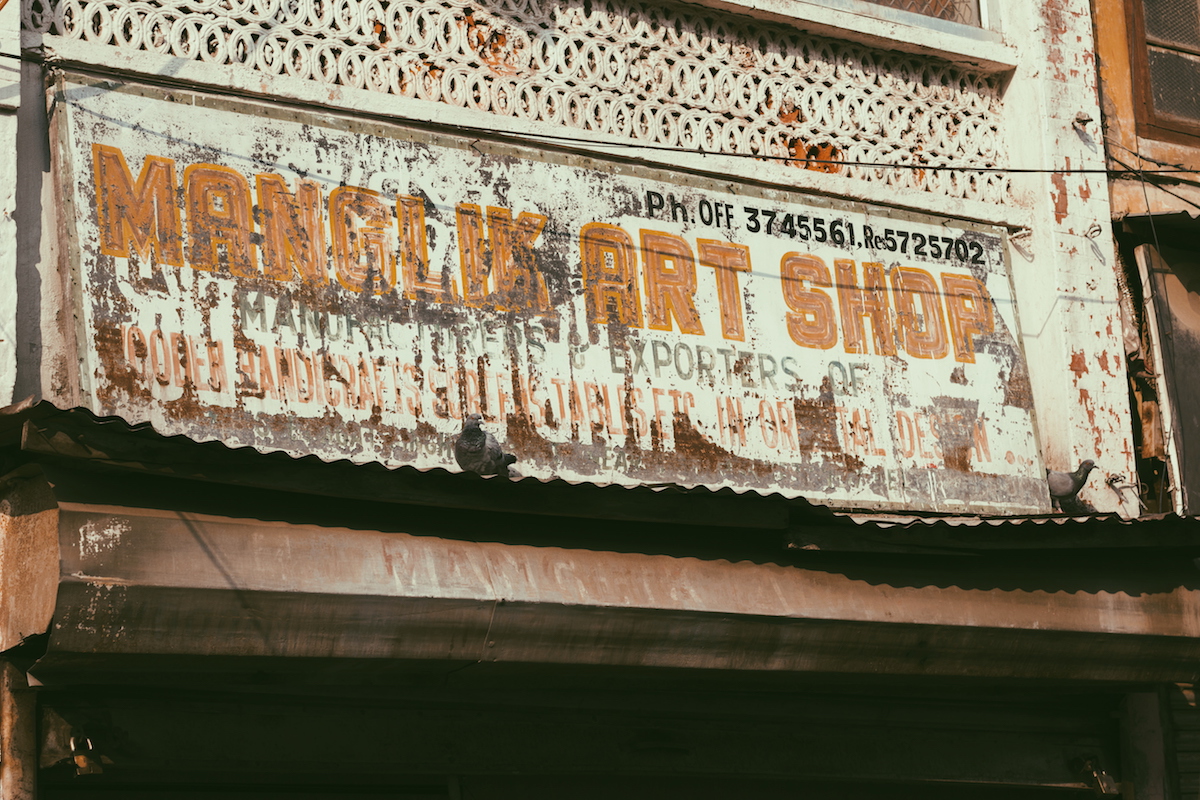 Manglik Art Shop, Gole Market. The painter has marked the outline of the letters with a different colour. Outlining is also a type of lettering style. The phone number painted on the right-hand side of the board is from a time when Delhi still used numbers with seven digits. 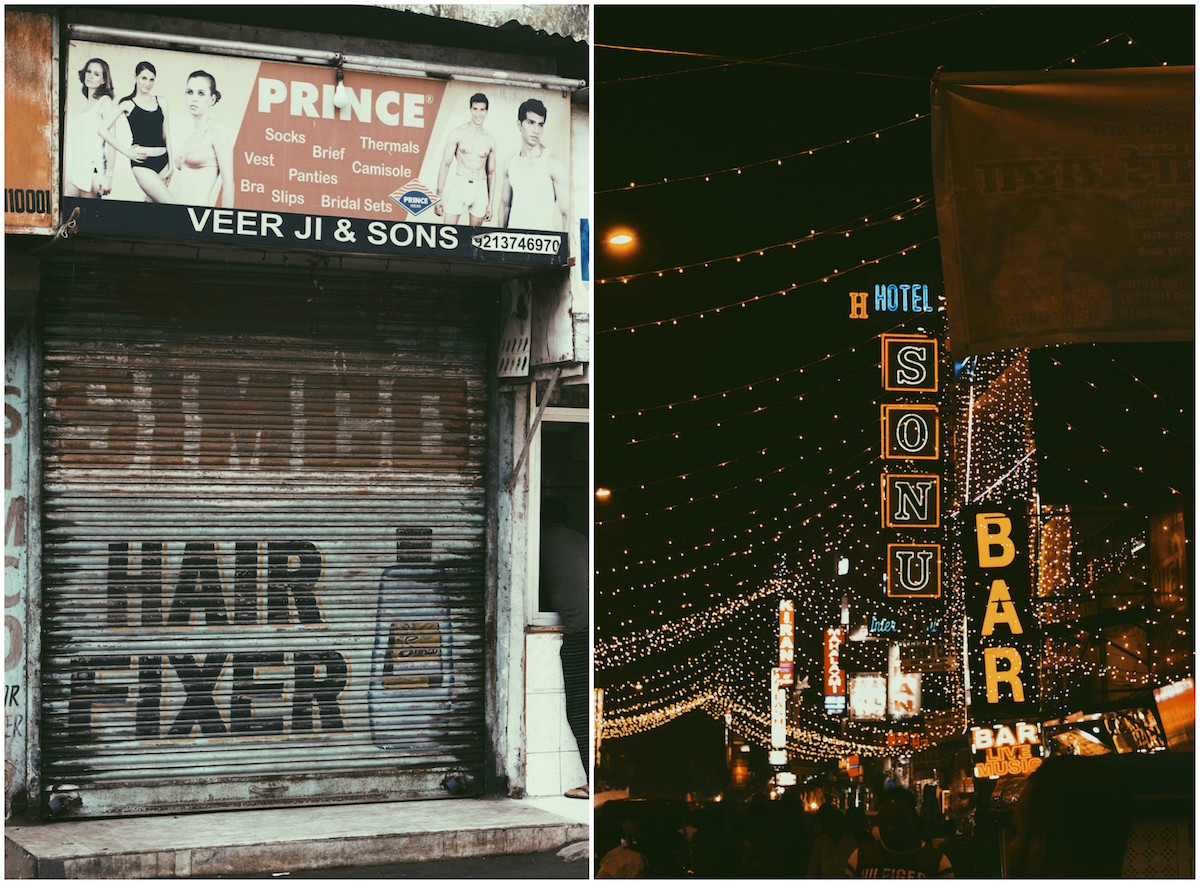 Left: An advertisement painted on a garage in Gole market. Right: Bars and hotels are abundant in Paharganj. In the background, printed flex signboards can be seen, competing with their neon counterparts. 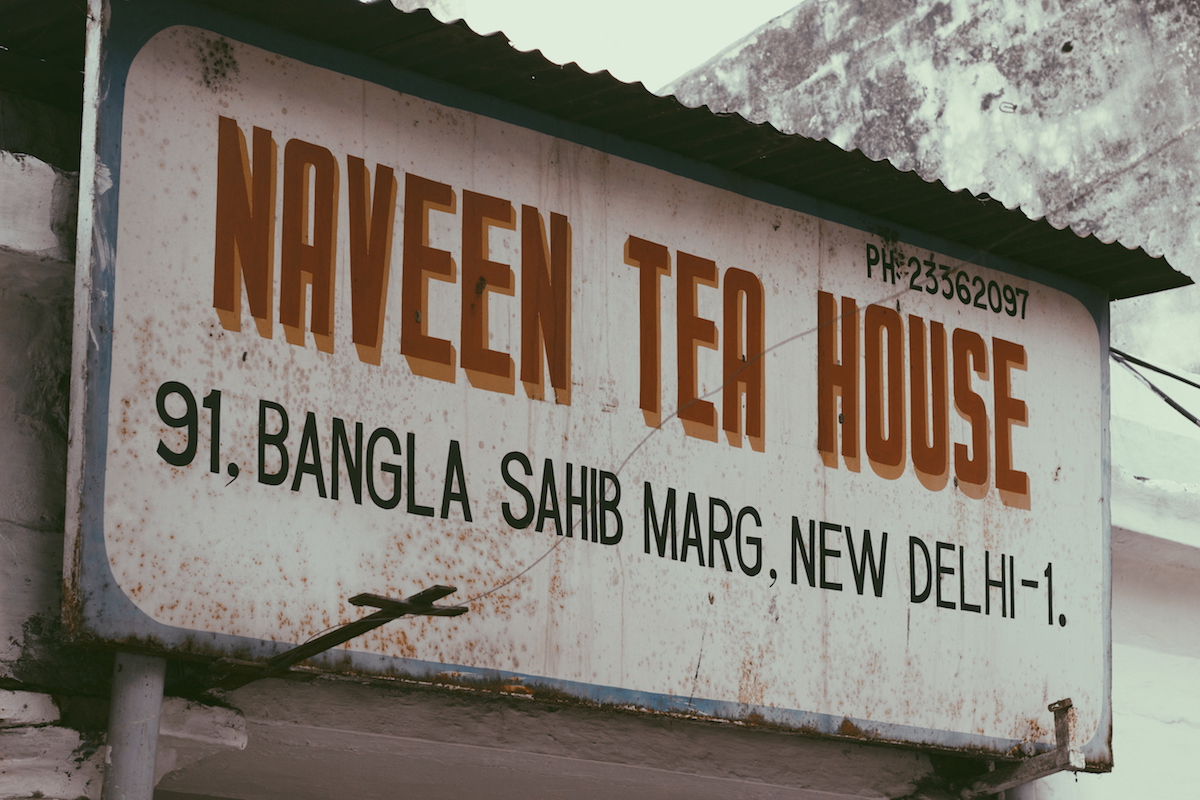 Naveen Tea House, Gole Market. Like most signs in Gole Market, this one too uses the shadow lettering style. The owner set up this shop in 1979. The lettering is painted on an iron board, which Naveen remembers was done by a painter at his residence when he was setting up shop. The signboard hasn’t been retouched since and Naveen does not plan to change it anytime soon. 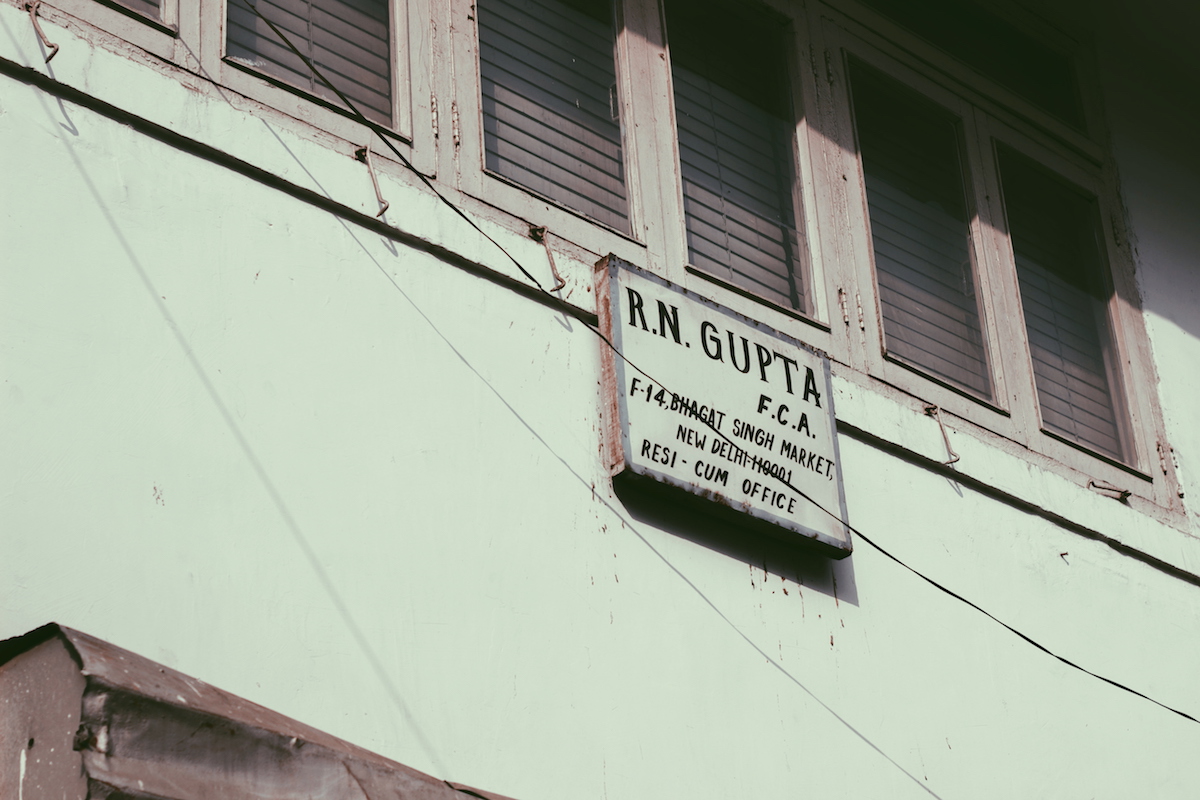 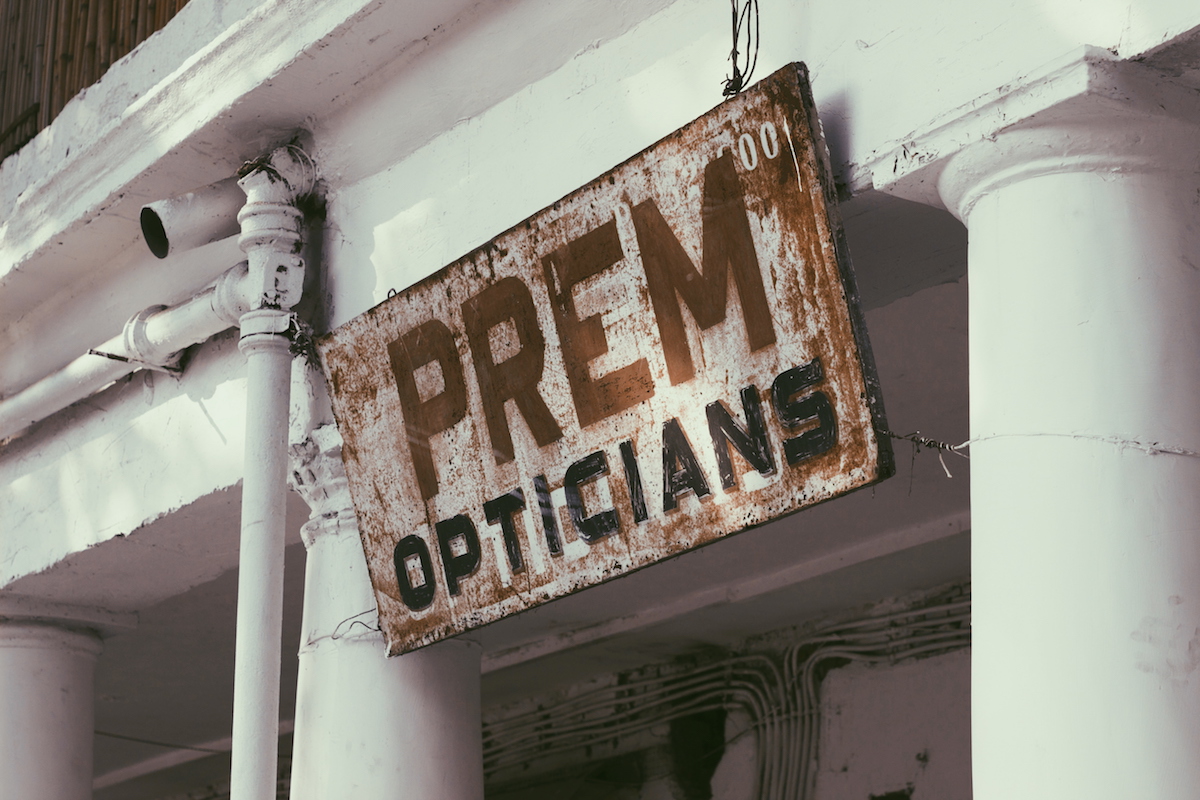 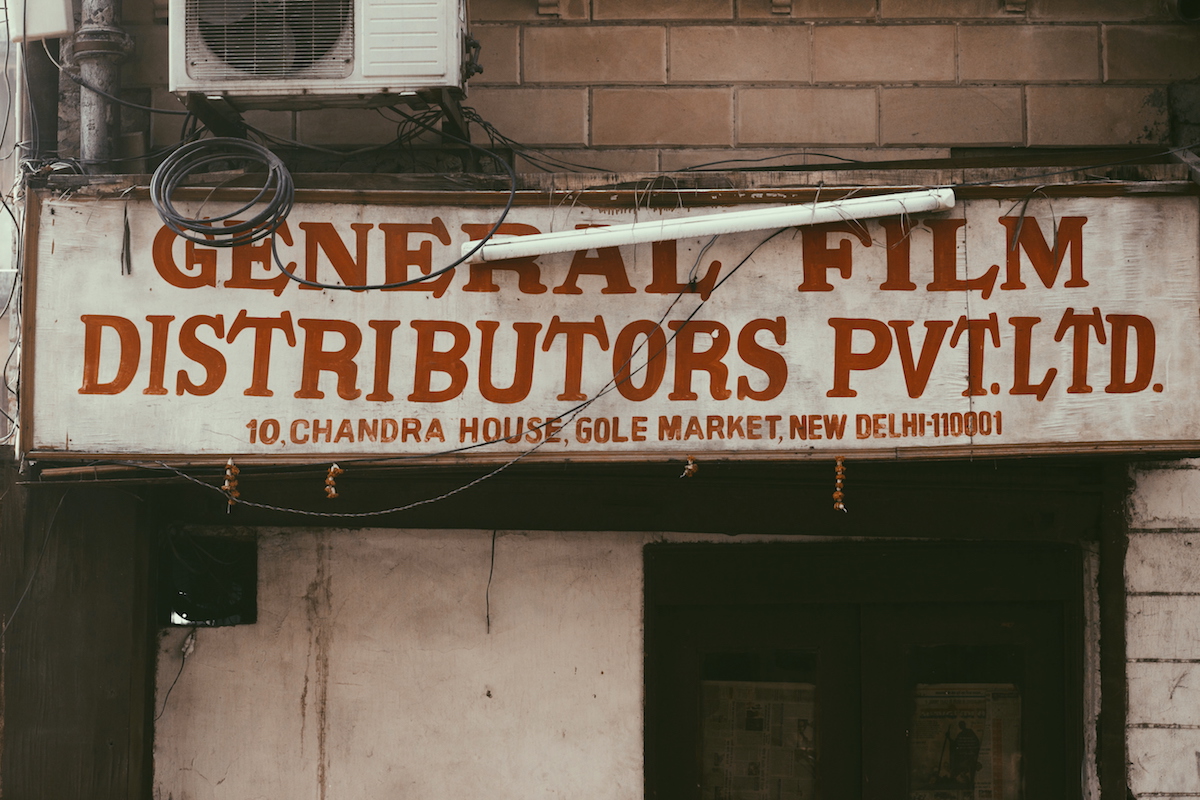 The account of Paharganj is based on a typography walk led by Pooja Saxena, at the Delhi Walk Festival in November, 2017. Her assistance has also been valuable in documenting signage in Gole Market.

Mehr Gill is a graduate of Shri Ram College of Commerce, Delhi University and an intern at The Wire.