No University for Dalits

Ten Dalit students were rusticated from the University of Hyderabad in 2001; one of them recounts the events as they played out. 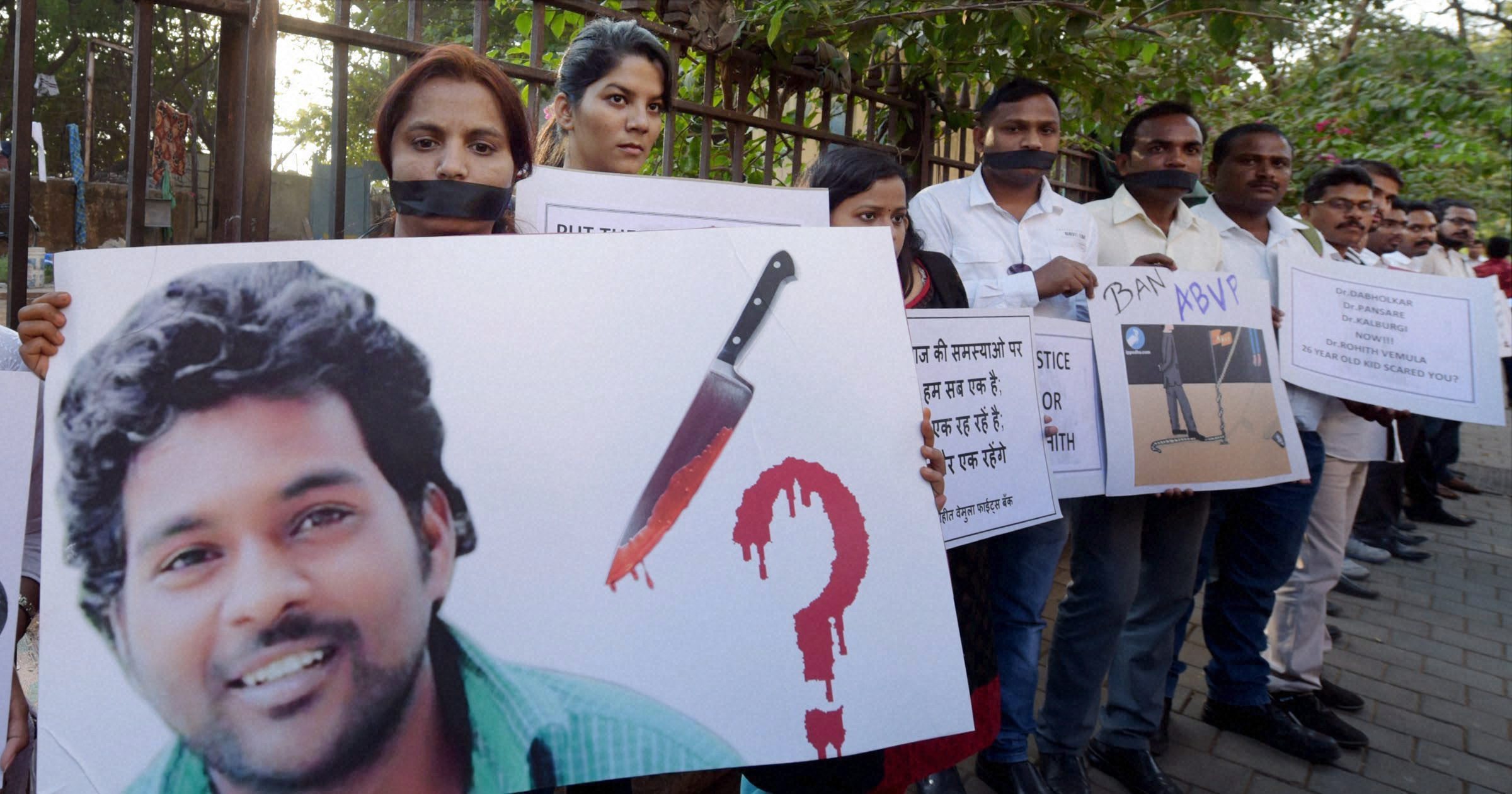 Students in Mumbai staging a protest against the suicide of a Dalit scholar in a Hyderabad Central University, on Thursday. Credit: PTI Photo by Santosh Hirlekar

Like Rohith Vemula, he was a chemistry student at the University of Hyderabad, a PhD scholar, a Dalit from the scheduled Mala caste and hailed from Guntur district. He was also part of the Ambedkar Students’ Association in 2001. And he was one among ten Dalit students who had been rusticated, allegedly at the insistence of the then-Chief-Warden of hostels Appa Rao Podile – the current Vice Chancellor of the University.

He spoke candidly to The Wire of his first-hand experience of casteism within the hallowed premises of the University of Hyderabad on the condition of anonymity. “My father had already retired as a school teacher by the time I joined the University of Hyderabad,” he said. “My mother was a homemaker. Dad received Rs.2,800 as pension every month. With this he had to take care of my elder brother, sister and myself. My uncle was an agricultural labourer and very poor, so dad used to help his children out with educational expenses, too,” he said.

He is angry and upset over Vemula’s suicide. “Dalit students being rusticated and committing suicide is not new in the university,” he stated. “Let me tell you the whole story, if you’ll permit me.”

Since 1979, when the university’s doors were first thrown open, students living in hostels were in charge of maintaining the mess. Termed ‘student maintenance’, the arrangement was that two students would take charge of maintaining the mess and buying monthly groceries and provisions for the hostel mess out of the funds collected from each student every month. Each month, two different students would have to do the job and the students who were in charge of maintenance were exempted from paying the monthly mess fees, as an incentive.

“At that time, the monthly mess fee was around 900 rupees,” he stated. “Most of the students who offered to do the job of ‘student maintenance’ were Dalits. We were all poor and it was a good way to save some money on mess fees for a month. The government gave us a scholarship which included Rs.550 per month toward mess fees. How could we make up the remaining Rs.350? Most of us never got money from home,” he said.

He charges the incumbent VC, Appa Rao Podile, with being behind a deliberate campaign to rusticate 10 Dalit students in January 2001. Then the Chief Warden of hostels, Podile was an authority figure for those living on campus. “Podile began saying that fraud was going on in the mess maintenance,” he said. “These were trumped up charges without any substance. Podile created a ‘Centralised Purchasing Committee’, removing students’ involvement, negating the mess-fee waiver and said that the mess supervisor would henceforth buy the provisions,” he explained.

Allegations abounded that Podile was dipping into the funds of the Centralised Purchasing Committee, setting up contracts with supermarkets and buying poor quality oil and rice by citing a higher price. “The quantity too was less when we checked,” he said. “There were 15 hostels at that time and they consumed 50 litres of oil per day per hostel as well as 100 kg of rice everyday in each hostel. The 25-kg bag of rice had only 24 kg in it. Oil too was of lesser quantity,” he said.

Members of the Ambedkar Students’ Association then began to protest against Podile, and about 80 students submitted a memorandum to him in January 2001. “Podile asked us to come back the next day,” he reminisced. “He had staff, wardens and  security personnel when we came back. Podile told us – I do not need to answer you, I have full powers given by the VC. He then asked the security guards to throw us out. A scuffle broke out and some glass got shattered. Podile then said we assaulted him and got 10 of us rusticated on January 10.”

A legal battle then ensued, with the students moving the court to get reinstated. “Podile sent a driver to me to ask me to submit an apology letter, stating that my rustication would immediately be revoked, he recollected. “I said I will not give him anything. Podile then got an apology letter from another rusticated student.”

The apology letter, which was submitted in court, lost the case for the students. The young student who had been allegedly lured into handing in an apology attempted suicide by consuming poison. He was hospitalised for 15 days but survived the attempt.

“I am proud to be the first Dalit scholar from the University of Hyderabad to have qualified for the Council of Scientific and Industrial Research fellowship,” he said. “I had studied in Telugu medium schools and colleges up until then. I had no knowledge of English. I bought an English dictionary and would study all the time,” he added.

Of the 10 students who were suspended, many are assistant professors in premier institutions across the country now. A number of them have gone abroad while some work as scientists, despite the baggage of a difficult and harrowing youth.

“Being a poor Dalit is not easy,” he continued. “I never got even hundred rupees from home. There was no money to buy toothpaste or soap. Other students would spend on Coca Cola and cigarettes,” he said. “Our predecessors had it even worse. Afraid of harassment and teasing due to extreme poverty back home, our seniors used to go into the woods, read letters from home quietly there, tear up the letters and then head back to the hostels.”

He also says that he is not surprised at the turn of events under Podile’s watch. Dalits, he says, have always been discriminated against and Podile, according to him, is one of the biggest perpetrators of such discrimination. “Many Dalit students couldn’t go home during vacations and they would stay on to study at the hostels,” he explained. “Chief Warden Podile would take these students to the main gate in jeeps and ask them to get out, calling them ‘unofficial’. These were students who were on the rolls of the University,” he recalled.

He says that he has been anguished ever since he read about the death of young Rohith Vemula, who committed suicide on January 17 following a chain of events leading to the suspension of five Dalit students, including Vemula, over an alleged attack on a leader of the Akhil Bharatiya Vidhyarthi Parishad. The University of Hyderabad revoked the suspension following protests but forbade these students from entering the hostels and administrative buildings. Following nationwide student protests in the wake of Vemula’s suicide, the University of Hyderabad relented and fully revoked the suspension of the other four Dalit students.

“My stomach is churning at this,” he stated. “How much harassment has been meted out to drive a person to take his own life? There is no justice,” he signed off.

Podile could not be reached for comments on the allegations and an email questionnaire to him went unanswered.