Young people appeal for kindness in a time of violence and aggression, channeling floral revolutions of the past. 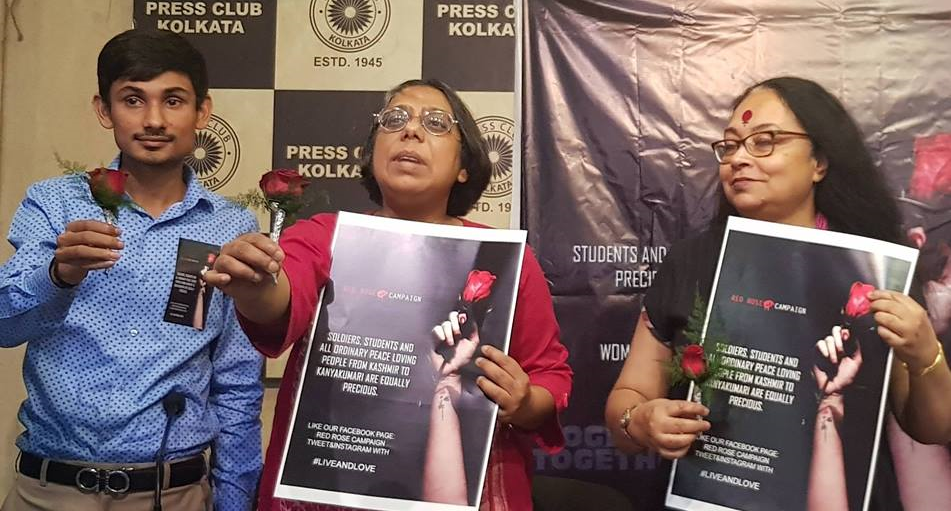 Kolkata: On February 23, the Press Club near the Esplanade attracted a moderately large group of about 200 young people and some not-so-young panelists. They had gathered to speak and listen, and participate in a symbolic exchange of love by swapping red roses.

This marked the launch of the Red Rose Campaign, which is rooting for love – not of juvenile crushes, but a more profound universal emotion that the country and the region need at the moment.

The air-conditioning was out of action and the ceiling fans were working extra hard as speakers spoke about the recent terror attack in Pulwama.

“There is violence in the country in the name of patriotism, and women’s groups must stand together to change that,” said Paromita Choudhury of the Maitri Network, which works with Dalit, Adivasi and other vulnerable women. “This eye for an eye approach should not become the norm and we should make sure it never comes to that.”

The panel, which mostly spoke in Bengali, condemned the attack on the CRPF soldiers and observed a two-minute silence in remembrance of the victims.

Presidency student Rimjhim Jain was thinking of the families too. “Even soldiers are just ordinary people, doing their jobs. When we protest that our soldiers are being killed, then we must object that Kashmiri youth are also being killed. What difference does it make how many are dead on either side? Killing will not return us to peace. Two states taking revenge on each other cannot be a solution.”

Jain says that a nationalist ideology is deliberately floated. “It becomes evident when Pakistan and India play cricket and it draws a huge crowd of spectators. We tend to become aggressive. And then when we ask someone walking by in a burkha if they are Pakistani and should they be sent back, we must realise we are being disrespectful towards the constitution.”

She recounted a scene from a film about Kashmir, in which an ordinary citizen visiting someone else was checked before entering the house. In another instance, near the Presidency College, she says a 17-year-old protesting the Pulwama attack was accosted by people of his own locality. “Then the police came and arrested him instead of the mob. These innocent youth are being treated with suspicion. We should realise that too.”

Sending an open invitation to those in trouble, Jain said: “We have told members of minority communities, especially Kashmiri students, Presidency will give them protection if needed.”

The event then saw a recitatal by Ayush Sarada of Ek Packet Umeed, which works with underprivileged children. The poem, his own composition in Hindi, had the refrain, ‘This is life and it teaches us a lot’.

He says: “Today when you give a rose to someone, please ask them this question: ‘What has life taught you?’. You will learn something new and the answer will give you strength and change your point of view.”

Changing the way the story is told Twenty-something Shahina Javed, from the Rajabazar slum, spoke of a group of forty defiant young women who were prevented from playing football in a small park.

Boys thought the space was theirs, while the women’s parents also felt discomfited at the sight of them having fun in “half pants”. “They would fight with them everyday”, Javed said.

Bishodeb Karmakar, an resident of Maniktala, which is near Rajabazaar heard about the problem. “He is a football lover,” Javed said, “and said they had no problem letting us use their ground. So forty of us have been going there.”

“We thought, why don’t we teach the girls to play football, maybe they will be able to fight other fights too,” Javed said.

She runs an NGO called Roshni, which works with adolescent girls. It has been able to prevent a few child marriages, but this has brought it to the attention of the conservative elders.

It was strange that in one place, the women could not enter the grounds, but in another they could. “Someone from the Hindu community offered us water, fixed us tiffins. Some even offered to give shoes to the girls who were playing barefooted,” Javed says.

She hoped that the campaign would spread to other areas. Her high, young voice belied the power of her words as she spoke. The campaign touched her, she said “We have to tell these stories with love. Every home teaches love and love has no religion,” she said.

Ruchira Gupta was one of the organisers of the event. A visiting professor at NYU, she is also a founder of the Delhi-based anti-sex trafficking agency called Apne Aap. She was reminded of similar movements in the 1960s, like Flower Power.

Gupta said symbols are powerful and remembers the famous picture taken by Marc Riboud of Jan Rose Kasmir placing a chrysanthemum in the barrel of a riot policeman’s gun in the 1967 Vietnam War protests. She was also reminded of Yoko Ono and John Lennon’s utopian vision in Bed-Ins for Peace, which celebrates its 50th anniversary this year.

“There are similarities across what’s happening in India right now with the 1930s in Germany, when Hitler rose to power,” says Ruchira. She says atrocities against minorities are being used to gain populist control of the majority through the creation of a new idea of a ‘nation’.

Sehrish Hazarika, who leads the Women’s Conclave in Jadavpur University, thinks “biases can be created anew with violence and hostility – both active or unspoken”.

The Red Rose Campaign hopes to fight that. It doffs its hat at Sophia and Hans Scholls, young Germans who were executed by guillotine for distributing anti-Nazi leaflets following a fake public trial in Munich in 1943.

They belonged to the White Rose, a group working in secrecy to influence Germans to retain their humanity in the face of authoritarian rule and preserve fundamental human liberties.

It is not clear why the young Germans chose the rose, but white, says Holocaust historian Anton Gill, symbolised they were not inspired by any colour of political thought, but by humanism.

However, Ruchira adds, “Their choice is also associated with the socialist school of thought. Bread and Roses is an iconic socialist song. It originated from a speech given by American socialist and feminist Rose Schneiderman. A famous line in it was, ‘The worker must have bread, but she must have roses, too’.”

Images can be arguments for peace or instigation of war. Love may indeed be both the practical and mystical route, a ‘gulmarg’, a path of flowers, to peace.

An event is plammed in Jammu on Saturday, March 2; a standout in Forbesganj, Araria District (Bihar) and a march in Siliguri (WB) both on Sunday, March 3. Several groups are planning their own events on Friday, March 8. For details, email Contact@apneaap.org. Follow the Red Rose Campaign on Facebook.