As global and local e-cigarettes gain a foothold, opinion is divided on how the benefits to adult smokers balance with the cost of their popularity with teens. 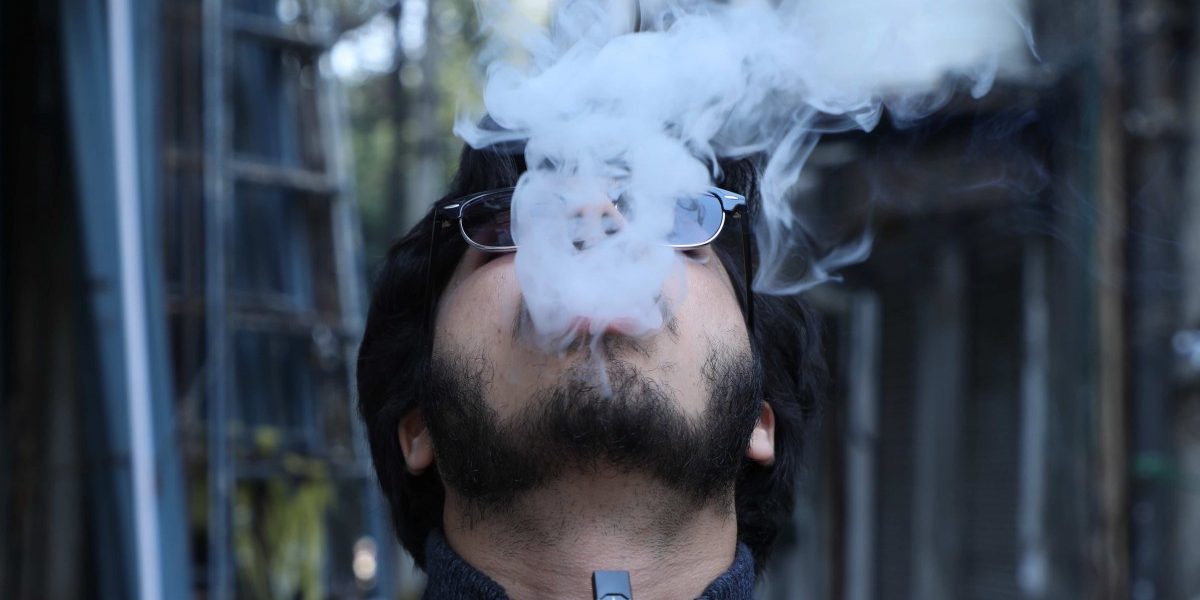 Note: This article was first published on February 3, 2019 and was republished on September 18, 2019 after the Union cabinet decided to ban e-cigarettes.

So says 17-year-old Ishaan over Whatsapp. He’s not talking about vegetables, obviously. Cucumber is his favourite Juul flavour, even if it’s not one of the most popular. Those would be mango, or crème brulee.

Right here I’m obliged to say the two things everyone always says when a Juul is mentioned.

If this gives you no idea about what a Juul is, you’re not alone, but you’re certainly not an elite teen or 20-something from an Indian metro. Yet the Juul, already the subject of serious health policy debates in the US, is now on the cusp of becoming a ubiquitous talking point in India.

At its most basic, a Juul is yet another ‘vaping’ device, or e-cigarette. Vapes are notionally healthier cigarette replacements: While a regular cigarette delivers nicotine with a lot of other substances known to be carcinogenic and toxic, vapes cut out all the extra smoke, offering a nicotine hit mixed with innocuous glycerin in a puff of pleasant, often dessert-smelling vapour.

No tar, no tobacco. And to make life easier: no fire, no smoke and no ash.

Nicotine itself, the logic goes, isn’t the culprit for smokers’ health issues, so might as well keep the good and sieve out the bad. The Juul took this redemptive philosophy one step further –  it has been marketed ostensibly as a device to help people quit smoking.

Vapes had a notoriously hard time going mainstream. Most were bulky, finicky devices – a thickish pipe attached to a squat canister of ‘e-juice’. To smoke, you press a button, releasing the electrical charge to vaporise the juice as you pull. They often sizzle audibly. This is the vape at its simplest – think a circa-Y2K Nokia. You can stash them in your bag or walk around with your fist curled around it, but you can’t casually slip it into your wallet.

The Juul has no buttons, no controls, and only a soft sizzle. You ‘juul’ (yes, it’s a verb now) as you would smoke a discreet, ever-lit cigarette: just put it to your mouth and pull, sucking in tasty air, exhaling a tendril or two of fog.

The Juul is so easy to use, so un-intrusive and appealing, that it may be too easy. Its slender, grey body can vanish by sleight of hand if a parent or other authority-figure passes by. They have made their way into the hands of middle-school students in private schools. 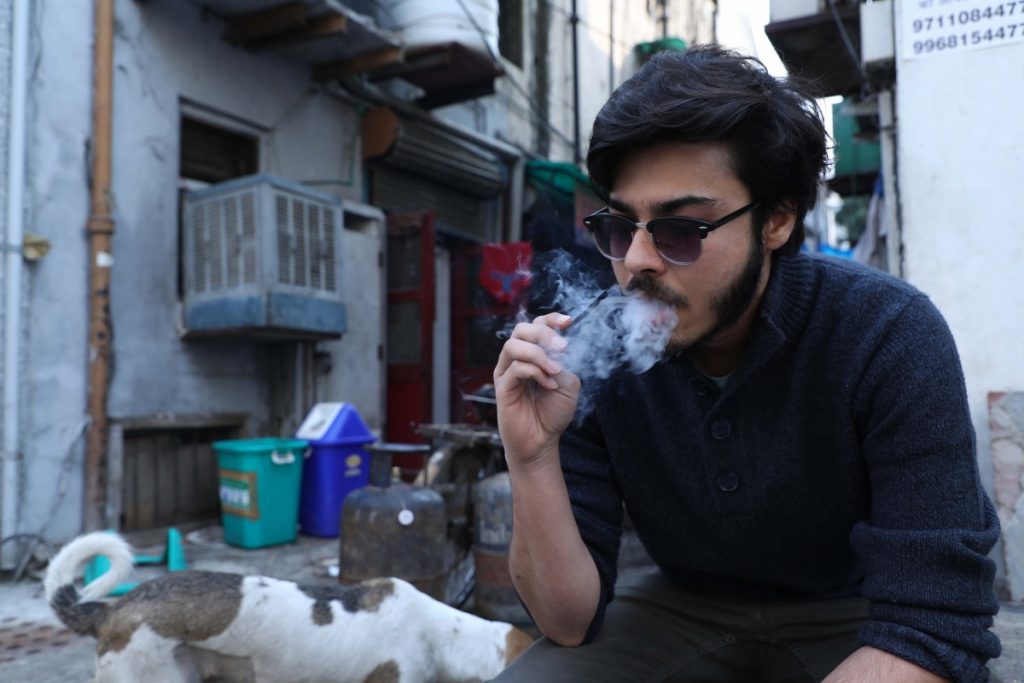 Like cigarettes and alcohol before them, vapes, especially Juuls, are already part of teens’ social currency – inaccessible enough to make them ‘cool’, but still within reach. Credit: The Wire

One 13-year-old “anonymous source” in New Delhi told The Wire how teachers learned her classmates were vaping in the bathrooms during lunch break. After a random bag check, “they found, like, three-four kids carrying their own vape pens.”

“One guy in my class, he brought it for the girls,” she said. “He probably got it from his older brother. It was in his pencil box. Maybe it’s like a cool, superiority complex thing? You know, angsty teenagers. But I think this was the first time it came to anyone’s attention that people in our grade were vaping.”

With older students in school, she said, “it’s just expected.”

Her 16-year-old sister chimed in: “My classmates? Oh yeah. They just don’t get caught.”

Vaping: Gateway or a way out?

The intended user of the Juul looks more like Kurush, a 24-year-old from Gurugram, who started smoking tobacco when he was 17. “I switched late last year,” he said at a recent party, pulling from his Juul as he did so. We had already engaged in the ‘iPhone of cigarettes’ ritual.

“I researched a lot,” he said, and concluded that Juuling isn’t harmful at all. He took a pull on his device, and exhaled a plume of smoke without the usual candy aroma. “This is tobacco,” he explained – meaning Juul’s ‘tobacco’ flavour.

Kurush says he misses smoking actual tobacco – the real heat, from real fire, hitting the back of his throat; the smell. He misses the morning routine of a cup of chai, a cigarette and the bathroom; things Juuls can’t replace. But he believes he’s made the right, healthier choice getting away from cigarettes.

Ishaan, the 17-year-old, feels none of this nostalgia. He was never a smoker to begin with. “I just like it cuz it’s a vape,” he texted. He isn’t a regular user, but with close to 15 of his classmates owning Juuls, vaping is now a normal, ritualised part of life.

Kurush and Ishaan represent two sets of Juul customers who will soon be at the eye of a policy storm in India. In 2019, the Juul – still the privilege of teens and young adults who can afford an imported device – is to be formally launched in India. Well ahead of its launch, Indian authorities are already deliberating over questions that have plagued the company in the United States.

On the face of it, Juuls are meant for people like Kurush, or those considerably older – adult smokers who want to wean themselves off tobacco, who can use the Juul as a stepping-stone, or just stick with it for a pure nicotine habit.

But authorities fear that it could make nicotine addicts of a generation of young people who would have never touched a cigarette – just as the global consensus turns against tobacco.

Nicotine may not be as harmful as all the stuff in a cigarette, but it’s still an addictive stimulant. How harmful it is is not conclusively known, making it tricky to categorise or regulate. While the US has attempted to crack down on teens’ Juul usage, the UK’s National Health Service has endorsed vapes as a way to quit smoking.

Conflicting studies are behind the confusion. Many researchers say vapes haven’t been around long enough to make any decisive claims about their effects, adverse or otherwise. Some studies support the claim that e-cigs help smokers quit cigarettes, and studies found that teens who smoke Juuls are likelier to smoke cigarettes. Some say that nicotine negatively impacts brain development in adolescents – but these are studies based on teens who smoked cigarettes.

The worry and confusion has arrived in India even before the Juul’s official entry into the market.

Indian regulators are pre-emptively cracking down on e-cigarettes, hoping to prevent the spread of what the Ministry of Health called “a great health risk”. E-cigarettes are banned in eight states, and late last year the health ministry advised states to ban the sale and import of e-cigarettes.

Taking a cue from the US, the government seems particularly concerned with the fruity flavours’ appeal to youth.

In response, in August 2018, the Association of Vapers in India (AVI) – a non-profit that promotes e-cigs for their ‘harm reduction’– released a statement panning the advisory as not backed by “science or facts”. The AVI’s director, Samrat Chowdhery, dismissed as “specious” the claim that “flavourings” target young people. Adults aren’t exactly in love with the bitter taste of tobacco, he said.

Viraj Mohan, who just launched an Indian alternative to the Juul – Alt Vapors – also thinks these concerns are misplaced. The American context is “vastly different” from India’s, he says. Age-based regulations, as exist for cigarettes and alcohol, will be more effective than a blanket ban or restricting flavours. Legal adults should have the right to vape in any flavour they want.

“Our market is those adults who have tried quitting smoking 20 times but are constrained by the lack of vapes and the prohibitive costs of international brands,” he said. “We need policies that will account for the net benefit to India’s 100 million-plus smokers and also prevent misuse by minors.”

The appeal to teens is a concern that’s particularly attached to Juul over any other vape company. The company claims its founding purpose was to reduce harm for lifelong cigarette smokers. Critics point out that its marketing strategies – through Instagram posts, packaging and flavours – have been aimed at younger buyers. 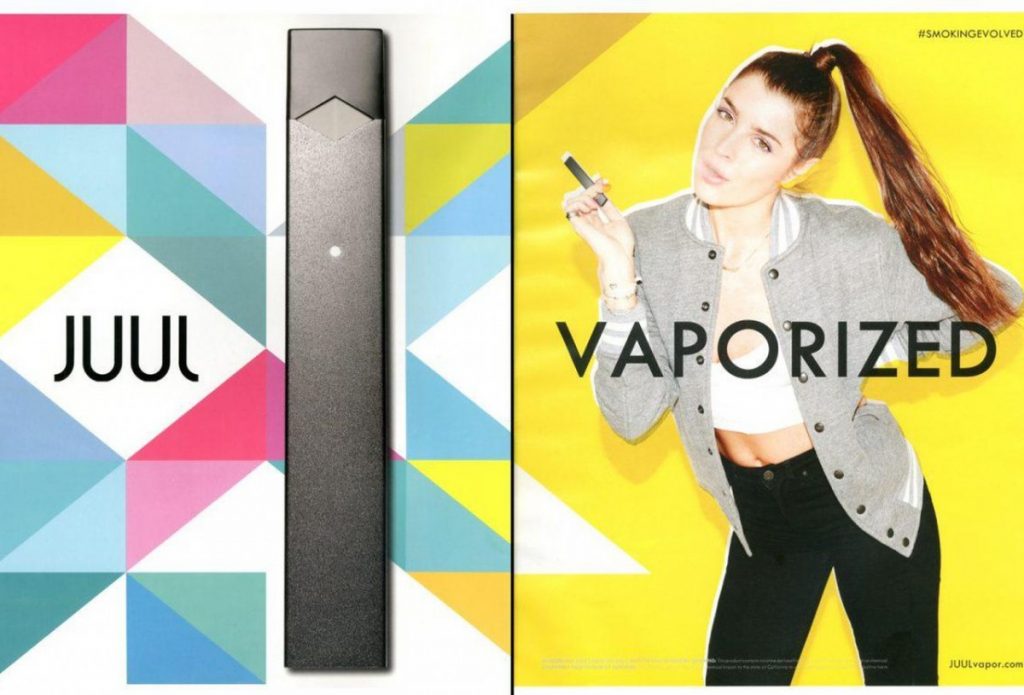 In India too, US-based vape retailers already seem to be wooing a niche crowd of young, wealthy millennials.

In September 2018, 24-year-old Krish, who works at The Wire, was invited to an exclusive “secret party” in a Delhi warehouse. It featured the musicians Didi Han, MadStarBase and Zokhuma, with remixes from Drake and FKA Twigs. Krish noticed the vaping samples and stalls at the venue, but only later realised that the event was organised by a US-based vaping retailer Auster – which describes itself as an “e-commerce platform for discerning vapers”.

Like cigarettes and alcohol before them, they are already part of teens’ social currency – inaccessible enough to make them ‘cool’, but still within reach. Juul’s products and pods – the disposable nicotine capsules – are easily bought online, at smoke shops and even convenience stores across New Delhi.

Its price – Rs 6,000-7,000 for a Juul device and Rs 2,500 for a set of four pods – doesn’t exactly scream accessibility for regular Indian smokers. But it’s not a barrier for well-off young Indians. In fact, it contributes to the Juul’s odd position in India right now – ubiquitous in an exclusive circle, but still virtually unknown outside it.

As a new entrant in India’s vaping industry, Mohan is wary of this circle dictating Indian policymakers’ decisions. It is not representative of his company’s target market, he says, and Alt is not trying to woo young non-smokers. An Alt starter kit – a device and four pods  – costs Rs 2,999; a single pod costs Rs 299.

Alt Vapors will have to bank on Juul’s ability to lobby for vape-friendly regulations  in India. In November of 2018, the tobacco giant Altria bought a massive stake in Juul, the company; with Big Tobacco comes heavy-weight lobbying and research.

Alt Vapors says it will be happy to sell its devices under the same regulations that apply to tobacco, alcohol (in some states), and even driving; that is, consumers over 18 should be able to exercise a legal right to use them.

In fact, Mohan hopes the government will tax vapes at a lower rate, to give them an advantage over more harmful cigarettes. With 106 million lives to change, Alt Vapors believes it has a clear business and moral mandate. It too wants to revolutionise quitting.

Smoking kills. Weaning long-term smokers off nicotine isn’t easy. But the question facing consumers and lawmakers will be more complicated – whether Juul is the salvation of long-time smokers, or an ingenious gateway to addiction for much younger Indians. Juul could be the future of quitting, or it could just be the future of the smoking habit.