Thanks to depleted stocks, getting arrested for fishing in Pakistani waters is a risk many Indian fishermen take. 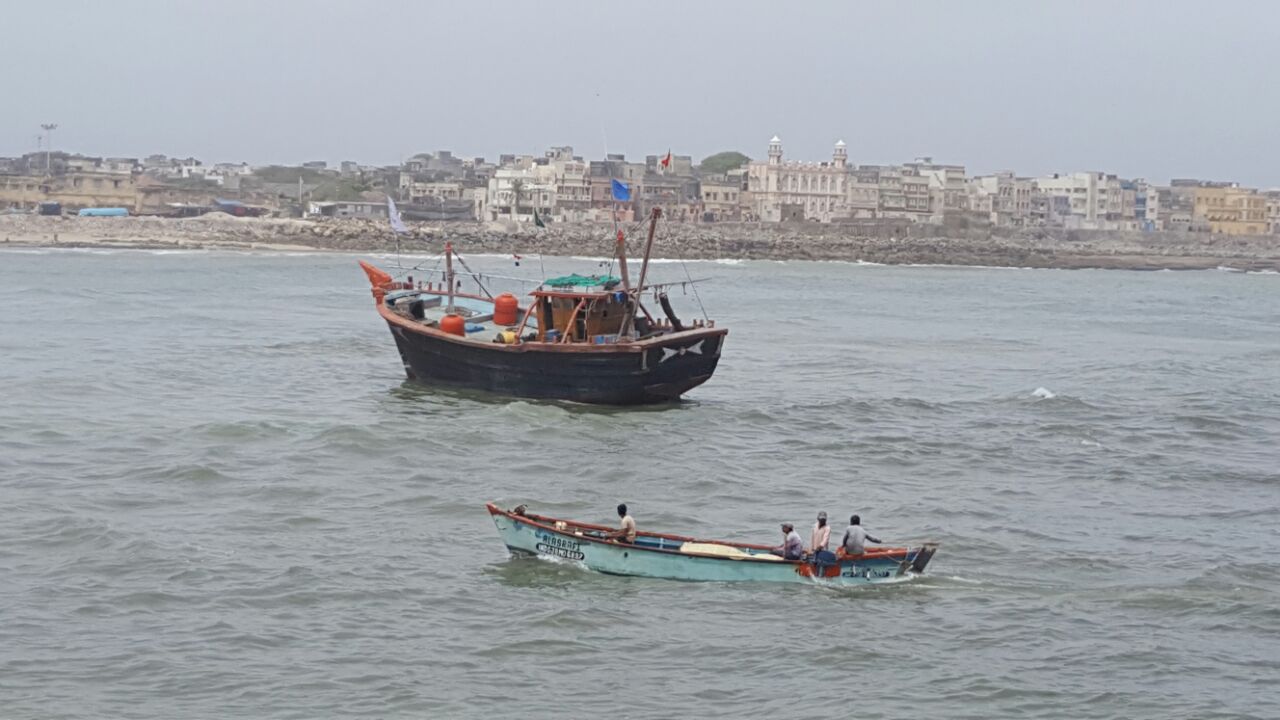 A boat sails off from Porbandar coast. This is not the ‘fishing season’, but financial crunch forces many to make multiple trips a month. Credit: Damayantee Dhar

Porbandar: A strong stench overpowers the smell of fish while travelling along the coast of the Arabian Sea at Porbandar towards Subhashnagar in Gujarat, a colony of sorts of fishermen. There are no concrete roads, streets lights are a rare sight and stray pigs are not uncommon around open drains in the area. Amidst this stands a temple of Santoshi Mata in a pool of sewage water overflowing from the open drain near it. Around the temple is where about a thousand families of fishermen live, surrounded by an unbearable smell..

Among them are four of the 291 fishermen who were released in two batches by Pakistan last December and then January. Spending time in a Pakistani prison is a risk that all fishermen who set out for long stretches in the sea take. Thanks to depleting stocks, that risk is increasing. The fishermen blame the pollution caused by the factories that have come up along the coastline for the depletion.

Ramesh Bhagwanji Chauhan is 45 years old and has been a fisherman for about 13 years. He has been arrested twice for crossing the International Maritime Border Line (IMBL) and fishing in Pakistani waters, once in 2016 and then again in 2017. 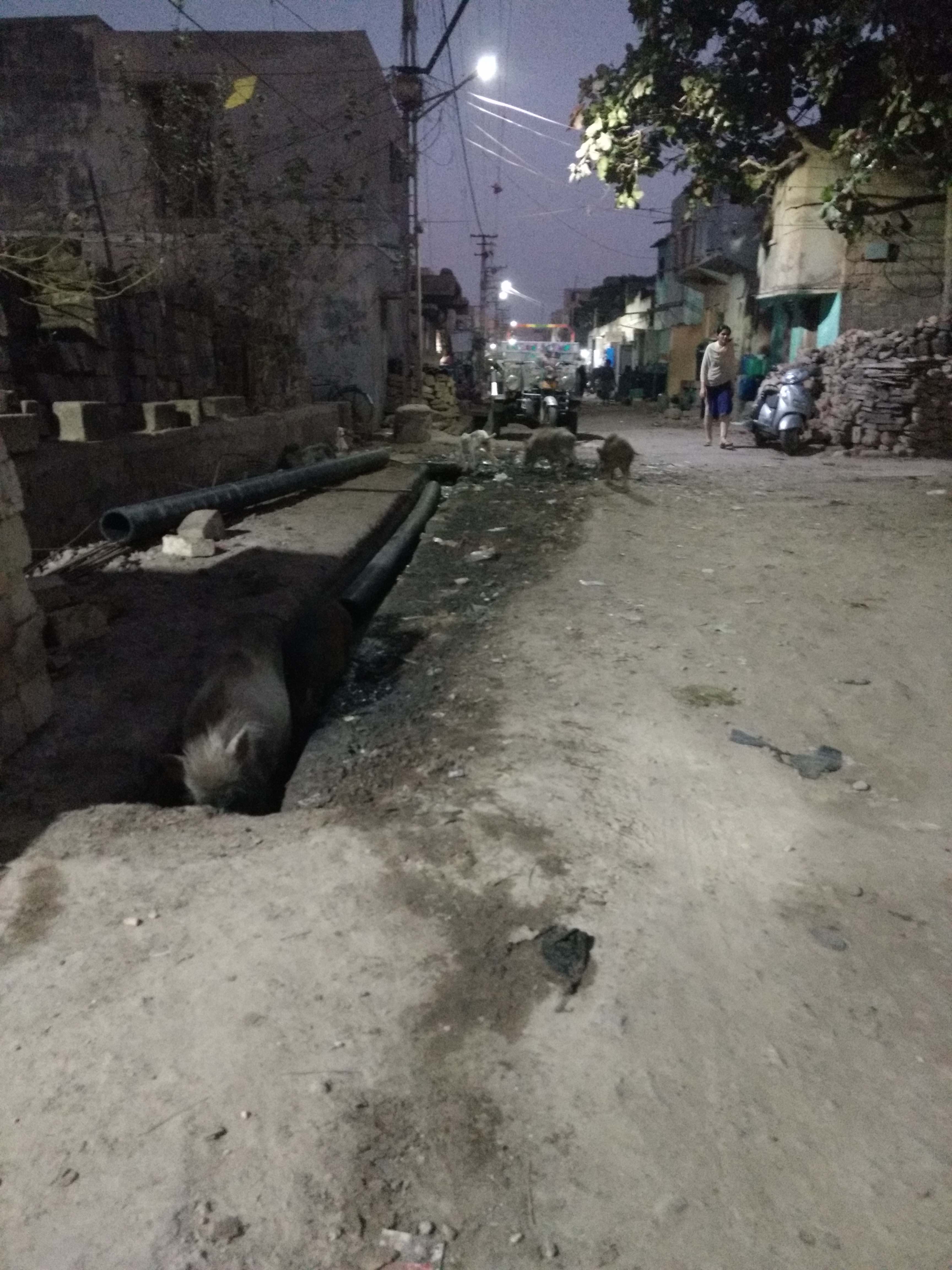 Subhashnagar, a ghetto of fishermen in Porbandar. Open drains, stray pigs and no street light in the area where about 1000 families live. Credit: Damayantee Dhar

“I was arrested in early 2016 and returned home after spending 12 months in a Pakistani jail. A fisherman earns between Rs 8,000-12,000 a month in about two or three trips out to sea. A trip usually lasts eight to 15 days. After returning in early 2017, I had to resume my work immediately as I am the sole earner for my family. I was arrested again in March 2017 and returned home a few days ago, Chauhan told The Wire.

“We (fishermen) don’t have a say in how far the boat or the trawler ventures in to the sea. That decision is taken by the tandel (captain) of the trawler. When we don’t get fish, the tandel is forced to go into Pakistan’s seas and sometimes even venture into Iran’s waters. The boat owner demands we bring back fish that is worth at least Rs 3 lakh. The expense per trip is around Rs 2.5 lakh that the boat owner has to bear,” he says. Clearly, there is no choice but to go further and further to meet the target.

First came the chemical industries. That was about a decade ago, after the formation of the Gujarat Industrial Development Corporation in Ankaleshwar, Bharuch. The coastline along Porbandar began to get badly affected when large industrial houses began setting up factories along the coast in the last five or six years. Despite regulations, the industries keep discharging untreated effluent into the sea. Added to that, even the Porbandar municipality releases city waste into the sea.

Chauhan lives in one room with his 24-year-old son Chetan. He drifts away as he speaks and points to the framed photograph of a young boy placed over a wooden shelf in the room. “He is my son who died at the age of 13. He was sick with something like cancer. I couldn’t take him out of Porbandar for treatment.”

Chetan says the Chauhans were a happy family at one time: “Struggling to make ends meet but happy nonetheless”. All that changed when Chauhan got arrested for the first time in 2016.

The experience of being put in a Pakistani jail changed him forever. “He was not the same after he returned. He became an alcoholic and occasional drug abuser. He would beat our mother and scream and abuse us. After a few months, our mother couldn’t take it anymore and left for her parent’s house in Veraval with my younger brother and sister. I decided to stay back with father,” says Chetan Chauhan.

“It was a terrible experience in jail. The fishermen are all kept together away from other inmates. We are given five chapatis a day to eat. That’s not enough, we stay hungry,” says Ramesh.

The same story comes from Dayaharibhai Tandel, another 59-year-old fisherman who returned home in mid-January after spending nine months in a Pakistani jail.

“They (Pakistani jail authorities) give us one chapati for breakfast, two for lunch and two for dinner. The quantity of food isn’t enough and most of us stay hungry. In the long run, it affects our health,” says Tandel who was diagnosed with TB after his return. 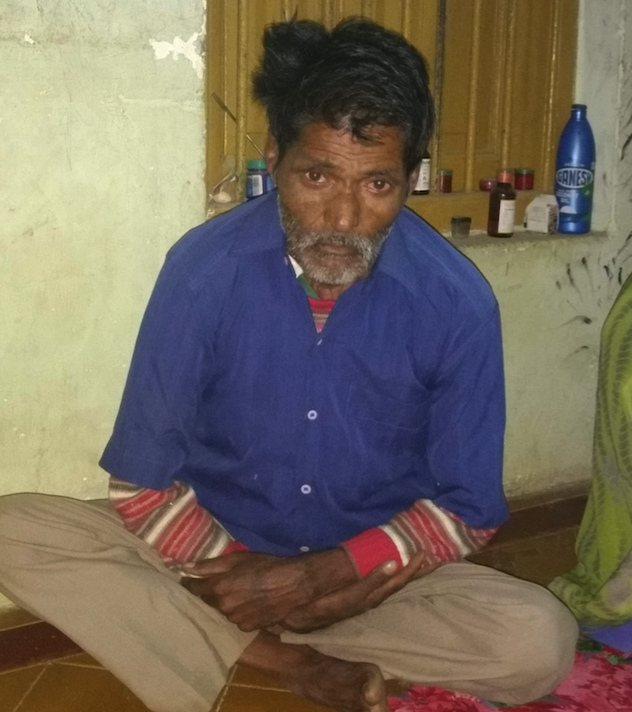 Dayaharibhai Tandel, 59, was diagnosed with TB after he spent nine months in a Pakistani jail. Credit: Damayantee Dhar

“There were about 22 boats near the IMBL. I don’t think we had actually crossed the Indian side yet. We saw a big Pakistani ship approaching us, they were armed. They opened fire at us, one bullet hit the glass on the cabin of our boat. They boarded, tied our hands and legs and thrashed us. My pants tore after being continuously thrashed. Later they asked the tandel of each boat to follow them. This happened in the evening and we reached Karachi at night. In jail they made us stand in line and hit us again. Many of us couldn’t take it anymore and broke down,” he recalls, his voice breaking.

“Except for that day when we were arrested, we were never mistreated in jail. But we got very limited food and we would have to work almost the entire day. Our families would sent letters and courier packets that reached us. My wife is uneducated so she couldn’t write to me. These nine months, I had no communication with my family,” adds Tandel.

Tandel has a family of three. His 18-year-old daughter has been married for a year now. His wife was not aware of the compensation of Rs 150 a day that family of fishermen get if they are caught by the Pakistani maritime authorities. Some local activists helped her by filling the forms and completing the process of claiming the compensation. The money will help in Tandel’s treatment, she hopes.

Dhanjibhai Babubhai Lodhari, a 38-year-old fisherman, was released from Landhi jail, Karachi, where all the fishermen were kept, and he returned home on January 8 this year. A week later, he set out to sea again – he had no option.

“That’s the only skill he has and he has to earn for the family,” says Lodhari’s wife, who worries for his safe return every day. It has been eight days already since he went in the sea to catch fish.

“He didn’t complain much about his days in jail. However, they don’t give soap in jail. So I sent shampoo along with some food through courier. He just got the shampoo,” she adds.

Lodhari has two sons. The younger, 8-year-old, fell sick while Lodhari was arrested. His wife borrowed money from various sources for treatment – the amount kept on rising and reached a total of Rs 1 lakh. Now they want to pay it off at the earliest.

Parshottam Bhagwanji Charanya has been catching fish for 15 years now. His father was also a fisherman. Charanya used to fish in what is called ‘local’ waters for the first four or five years. Then industries came up along the coastline and fish along the coastline gradually vanished.

“It’s been around eight years that I had to opt for venturing into the deep sea. The quantity of fish in local water kept going down and the number of fishermen and boats was increasing. Whenever one group of fishermen got to know about a pocket of fish available at a spot, all boats would come along to fish in same area,” says Charanya. 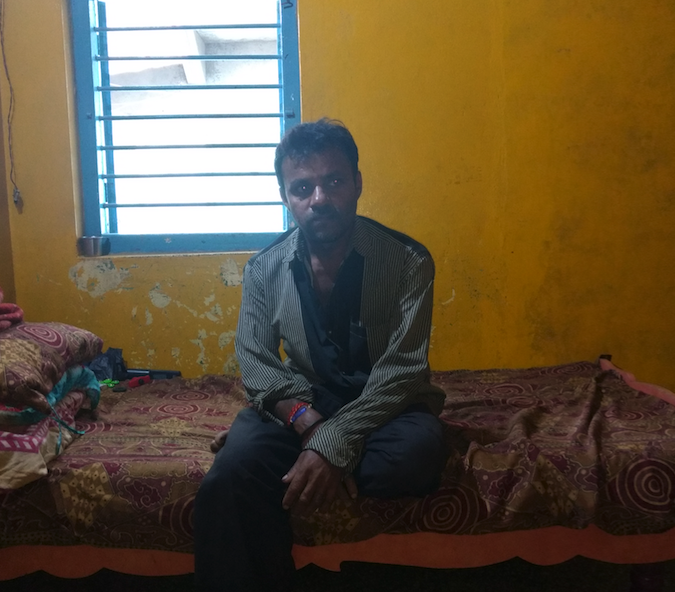 Parshottam Bhagwanji Charanya was in a Pakistani jail for 14 months and 14 days. Credit: Damayantee Dhar

“No fisherman or tandel wants to cross Indian waters, get arrested and stay away from home for months and sometimes years. We do it to earn enough money so that our families can eat, our kids can study for a good future. When there are no fish along the coastline and scanty fish in Indian water, we switch off the light during evening or night and cross into Pakistan seas. Some even go further. There is at least 90% more fish in Pakistan’s waters. At times if a fisherman is lucky, they come back with a good catch from the Pakistani side without being caught,” he adds.

However, not all fishermen cross knowingly. Some cross inadvertently because they cannot read the GPS accurately.

“The tandels and fishermen are mostly uneducated and usually can’t handle a gadget like GPS. Most fishermen have been in this profession for generations and they function mostly on instincts and experience they gain from going into the sea from an early age,” said Jivan Jungi, former president of the Shree Porbandar Machimar Boat Association, an organisation of boat owners in Porbandar.

The process to get the Indian government moving can be very tedious. A boat owner is the first to be informed when his boat is captured in Pakistani waters. He then informs the families of the crew members. The fishermen’s families hand over the required documents to the boat owner. Most of the wives, being uneducated, depend on the boat owner to guide them through the process at each government office. After a basic police verification at the local police station, the names with documents are handed over to the commissioner of fisheries in Gandhinagar. They take another three to four months to move the documents to the department of animal husbandry, dairying and fisheries in Delhi. Finally, it is sent to the Ministry of External Affairs, which negotiates the return of the fishermen.

Some fishermen have even died in Pakistani jails waiting for their turn to come back home. Charanya says he was lucky to be able to return in 14 months and 14 days.

“My father was ailing when I got arrested. I had assured him I will take care of him and that he wouldn’t need to work anymore. When I came back I looked for him in his room but he wasn’t there. He had a cardiac arrest a week after I was gone and did not survive. I just stood in front of his photograph on the wall, unable to control my tears,” he shares. “My wife wrote me three letters but never told me about my father. We never tell our families about any bad news in the couple of letters we exchange from Pakistani jail,” he adds.

“I don’t want my kids to become fishermen. I want them to study. We are a family of fishermen but there is no future in the profession anymore,” he says, determined that his children will have a better life than he ever had.