India's COVID-19 Disaster Has Changed Our Relationship With Death

As the curve of COVID-19 deaths continues to rise at escape velocity, we continue to deep dig deeper into our grief. 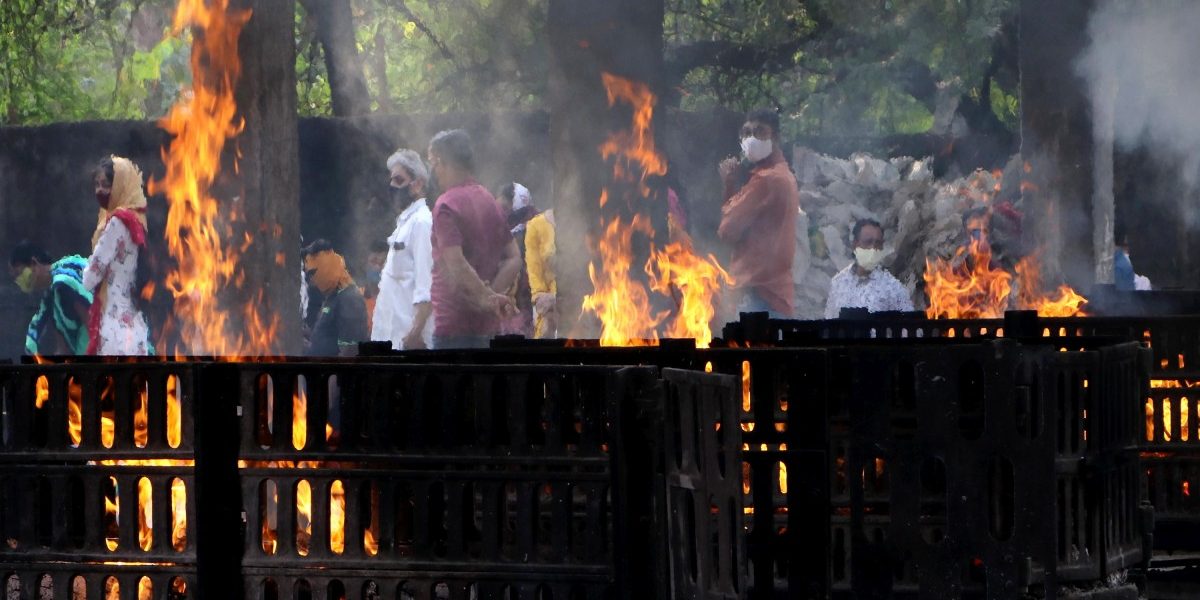 Family members during the cremation of COVID-19 victim at a cremation ground in Mokshadham Ghat in Nagpur, Maharashtra on Saturday. May 15, 2021. Photo: PTI

Till around a few months ago, deaths due to the COVID-19 virus were mere numbers for most of us. It was like watching the storm from the shore. Suddenly, like those dream sequences of movies, the numbers transformed into names. The storm had made a landing in our lives.

Azra, Talat, Akhtar, Shadab and Shoaib were not five people killed by this deadly virus but people whom I knew, I loved, I spoke to, partied with, shared joys with and had cried in their sorrow. Brijesh, Kamal, Inderjeet, Rakesh were friends and acquaintances. The list is endless. The pandemic has reduced us to a grieving nation. Our corpses are heavy with regret – the regret of missing out on a son’s wedding or a daughter’s graduation, or maybe the regret of that furtive unfulfilled wish which kept them alive till the virus asphyxiated them. And also, maybe the regret of being born in a country, the political leadership of which didn’t give two hoots to the health of its citizens? We shall never know.

As a doctor, I was trained to see the dying and the dead. I learnt the World Health Organisation (WHO) classification of bereavement – those five stages which the august body thinks are the beginning and end of grief. The pandemic has revealed our folly in believing what we did. It reveals our abject inadequacy of knowledge, both of the virus and of its end result, namely death.

My training had no bearing to handle that first message on the family WhatsApp group. A loved one had died. That came as a jolt because the dead cousin was well a few hours ago. There was an eerie silence on my phone. The aged family members were quickly removed from the group in a last ditch effort to save them from the trauma of awareness of a young death. Death was hidden like an evil deed. Brushed under the carpet. It all looked artificial to me, more so because after the initial silence there was a deluge of emotions, memories and regret. During the first wave, if death was tip-toeing around us, then in the second wave it is making a brazen entry through the front door. Nothing could beat the immorality of death. No classification can reveal the beginning and, most importantly, the end of grief.

Also read: By Issuing Guidelines to Protect the Rights of the Dead, Has NHRC Rediscovered Its Potential?

Death due to COVID-19 is unique in many ways. It happens in isolation, away in a hostile landscape full of beeping ventilators and all-clad stiff bodies with blurry, stern faces. Holding hands is not allowed. Loved ones trying to get a glimpse of their dying ones from across smoked glass windows of the ward or the ICU is considered a breach of protocol. I could not hug my sobbing cousin whose lifeless mother lay in the room. Protocols inhibited love to be transmitted. Grief was put on hold.

Some were not as lucky or rather as privileged as the five of my family who died in a hospital bed, under the care of tired nurses and doctors. My friend, Brijesh, an orthopaedic surgeon like me, left a heart-wrenching audio message from his hospital bed barely four days before he died. These were privileges of the times we are living in – a hospital bed, an oxygen cylinder, lifesaving medicines!

Mrs Dasgupta, a 75-year-old widow whose son lives in the US, wasn’t that lucky. Her last message on my phone was as heart wrenching as Brijesh’s. “Please arrange a hospital bed for me beta,” she had written four hours before she died in the car park of a big government hospital. I was ashamed in my grief for Mrs Dasgupta. Her son wrote to me, “Thank you. I know you tried. I know the system has collapsed there. I wish I was there in her last moments.” No, the system hadn’t collapsed. As Arundhati Roy had said in her recent essay, “The system has not collapsed. The “system” barely existed.”

Unfortunately I am part of the debris of this “system”. A ‘debris doctor’ who couldn’t even get a bed to the dying mother of a friend. In his essay Intoxicated by My Illness, Anatole Broyard, the maverick editor of the New York Times, says, “The aloofness of the critically ill is akin to the haunting of a Chirico painting.” Chirico’s metaphysical art was nowhere near the aloofness and fear which would have engulfed Mrs Dasgupta in her last moments in that dimly lit car park. Her trepidation is beyond my imagination.

Relatives and family wait to cremate the dead on the banks of River Ganga, in Unnao, Thursday, May 13, 2021. Photo: PTI

The trajectory of grief, which of course isn’t measurable by any classification, has held us by the collar. As the curve of COVID-19 deaths continues to rise at escape velocity, we continue to deep dig deeper into our grief. As we dig deeper, we become numb to the idea of death. We invent our own ways to cope with the irreversibility of it.

One of the greatest science fiction writers, Isaac Asimov, had once written, “Life is pleasant. Death is peaceful. It’s the transition that’s troublesome.” I am not sure if Asimov would have said something similar had he seen the current crisis in India. Here, transition is not troublesome. Transition is brutal. Death due to COVID-19 is not the same as death due to lack of oxygen or lack of medical care. These deaths are not transitions. They are abrupt, cruel accidents due to the unpreparedness, callousness and complete haughtiness of those in power. These are murders. And now they are happening in rural India with equal viciousness.

As death and grief continue to rule our lives, we need to cling to hope. One of the most prolific proponents of hospice care was the psychiatrist Elizabeth Kubler Roth. In her most defining work, On Death and Dying, she has written, “The reality is that you will grieve forever. You will not ‘get over’ the loss of a loved one; you will learn to live with it. You will heal and you will rebuild yourself around the loss you have suffered. You will be whole again but you will never be the same. Nor should you be the same nor would you want to.”

We need to imbibe Dr Roth’s words as the gospel of truth. We need to build ourselves in the debris which surrounds us. We have to mourn in our own ways. We have to mourn each loved one, each friend and each corpse thrown out of the deep blue heart of the holy river. Because mourning is a celebration of our existence in these horrid times.

In Chronicle of a Death Foretold, Marquez describes the murder of the Arab man, Santiago Nasr. After being stabbed in the abdomen by the Vicario twins, Nasr’s intestines hung out and he walked for some time. He held his entrails in his hand. He stumbled on the last step and took care to brush off the dirt that was stuck to his guts. India, like Nasr, is walking with its intestines hanging out. Who will even care to brush the dirt from these hanging innards is something which time will tell. And before that happens, we have to keep walking. We need to speak to our wounds. We are still alive, we should keep bleeding and breathing.

Shah Alam Khan is a professor of orthopaedics at AIIMS, New Delhi. Views are personal.