Condemning the attacks, Muslims in different parts of the country visited churches to present white roses and express solidarity. 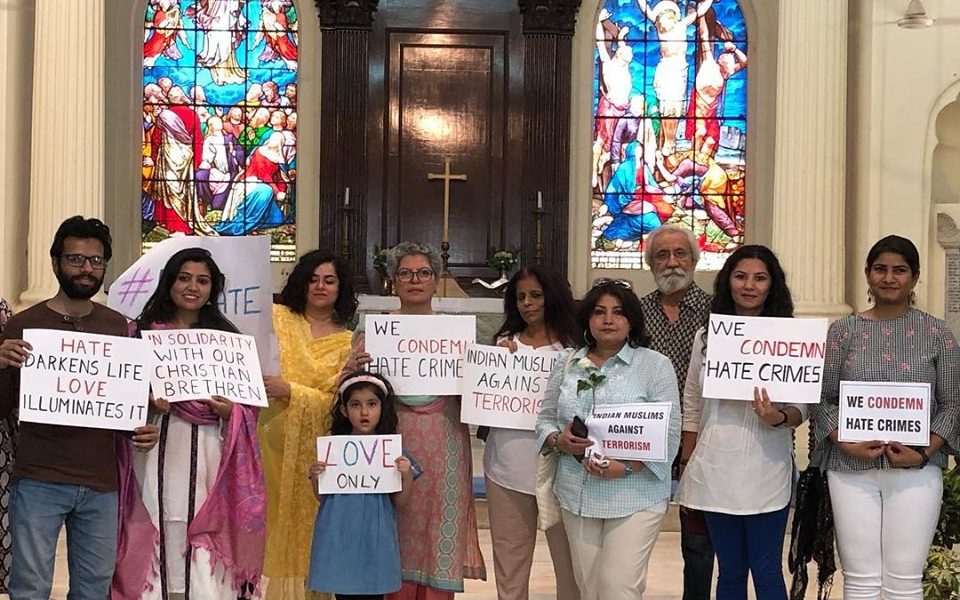 New Delhi: The historical St James Church in the Kashmiri Gate area of the national capital witnessed something rather unusual this Sunday. During the service, apart from Christian churchgoers, more than a dozen Muslims from different parts of Delhi and the National Capital Region were in attendance.

They were there to extend solidarity with the Christian and other communities in the wake of the horrific terror attacks on churches and hotels in Sri Lanka on Easter Sunday. After the service, they presented white roses to the faithful who had come for the service.

This is “to show we stand united and hate cannot divide us,” read the message circulated on social media inviting Muslims to participate in it. “In solidarity with our Christian brethren and the entire humanity and as the Muslims of Delhi prepare for Ramzan, we wish to start the pious month by standing up for our Christian brothers,” it added. Ramzan, the holy month of fasting for Muslims, begins on Tuesday.

Welcoming those extending solidarity on behalf of the Church and the Christian community in and around Kashmiri Gate, Father Rev Prateek Pillai said, “We are happy that you have come, with the sweet gesture, white roses and good messages. It is a prayer together that the God would enable all of us to work for the betterment of humanity, propagate the message of peace and fraternity.”

Apart from the white roses, the Muslims carried placards with messages such as ‘Hate Darkens Life, Love Illuminates it’, ‘We Condemn Hate Crimes’ and ‘Not In Our Name’. 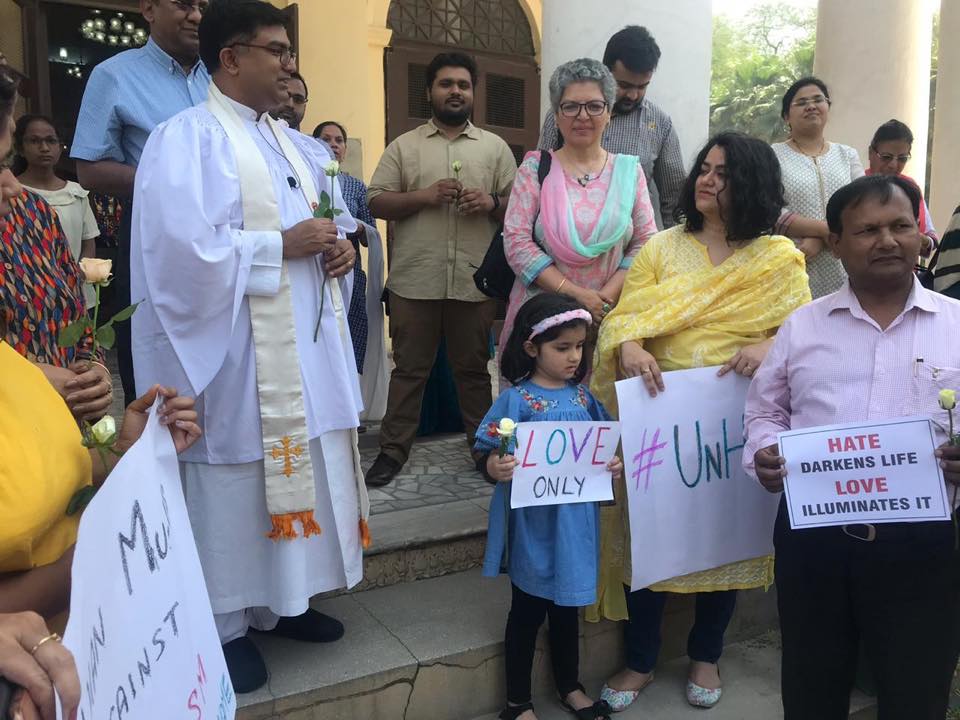 However, this was not the only initiative. In the wake of the bombings, several meetings were organised by Muslims across the country to condemn the terror attack and express solidarity with the victims and their family members. Meetings were held in Ranchi, Hyderabad, Nagpur, Chennai, Mysore, Lucknow and Kasaragod.

Muslim religious groups in the country were quick to denounce the act of terror and appealed for calm and peace. Just two days after the attack, a joint press conference was organised at the Constitution Club of Delhi by several Muslim organisations and Christian religious leaders. The leaders categorically denounced the blasts and termed people behind them “anti-human, anti-God and anti-civilisation and incarnation of most heinous and devilish forces on the earth.” In Hyderabad, a week after the blasts, Muslims gathered at the city’s St George’s Church to express their solidarity. During the sermon delivered by priests and pastors, the need for unity and peace was stressed. Later, Shaikh Mirza Yawer Baig, an Imam of Masjid Mahmood Habib in Banjara Hills along with several other Muslim clergy and scholars also addressed those who had arrived for the service.

Humbled to be part of a beautiful #Hyderabad moment — Muslim faithful, creating a cordon of love and support, guided Christian followers to their church a week after the horrible Sri Lanka Easter attacks. Familiarity breeds not contempt, but understanding and compassion. pic.twitter.com/k2xOccta71

On the same day, Muslims gathered at St Philomena’s in Mysore, St Mary’s Cathedral Church in Ranchi, St Luke’s Church in Chennai and at different churches in Nagpur, Lucknow and Kasaragod, holding placards and gifting roses to members of the Christian community. A large number of participants were Muslim women and girls. 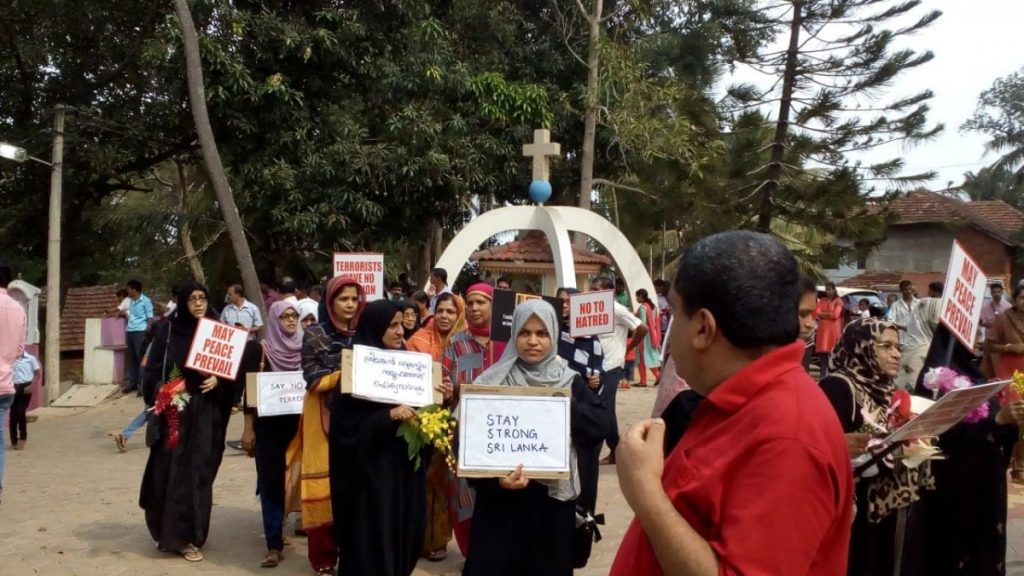 Members of Muslim Community outside a Church in Kasaragod in Kerala. Credit: Twitter

Meanwhile, on May 4, a delegation of Jamiat Ulama-i-Hind, under the leadership of its general secretary Maulana Mahmood Madani, met the president of the Catholic Bishop’s Conference of India, Cardinal Oswald Gracias at his residence in Mumbai. Conveying sympathy on behalf of Indian Muslims to the Christian brethren, the Jamiat delegation said it stands with the aggrieved Christian community. Madani also announced that Cardinal Gracias will be the chief guest for the Jamiat’s Eid Millan celebration this year. 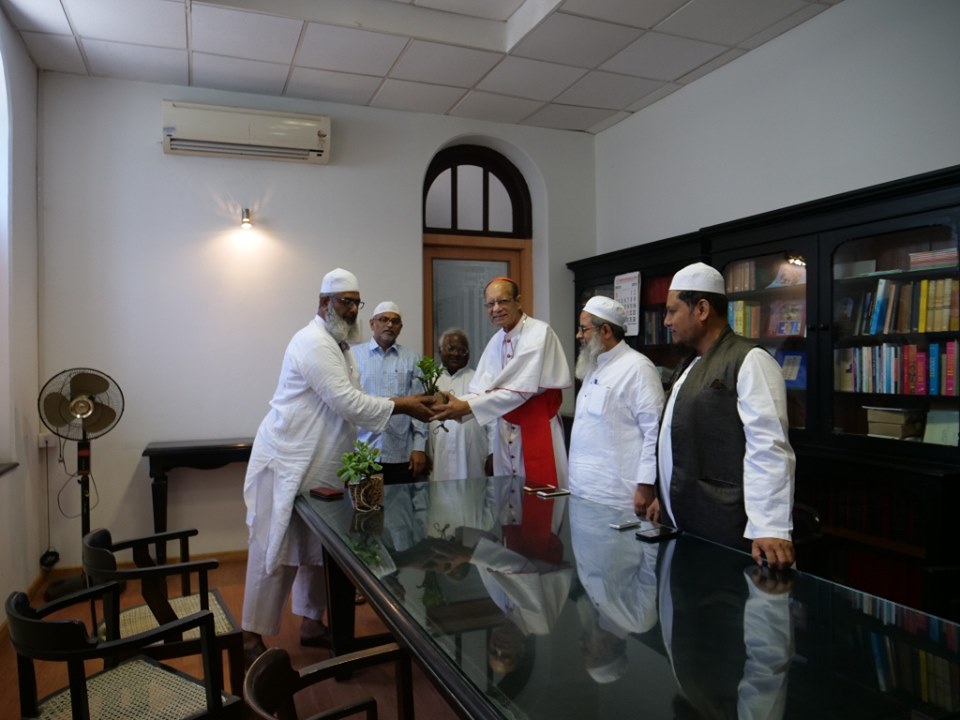