In Madurai, a Crematorium Where the 'Dead Serve the Living'

From feeding the homeless every day to creating infrastructure for public schools, whatever the Anjali Thagana Medai saves from its monthly earnings is put to use towards welfare causes.

The inside of the Anjali Thagana Medai, Madurai. Photo: M. Palani Kumar.

Madurai: Forty-seven-year-old Madhan Karuppaiah’s day typically starts at nine in the morning when he leaves his apartment at Andalpuram in Madurai to visit two temples and a railway junction. Strangely, the purpose is neither pray nor travel. Outside the temples and the junction, Madhan and a volunteer working with him distribute food pockets to 100-odd women and men.

“Today, the menu is sambhar rice, pickle and an appalam, we try to maintain some kind of variety,” says Madhan. He has been doing this since the lockdown was imposed during the first wave of COVID-19. “Few days into the lockdown, it struck some of us that there were people who had absolutely no one to turn to. So, we decided to give food to those living on the streets.”

His next stop is oddly an electric crematorium.

Three kilometres away from his place at Keezhathurai Moolakarai is Anjali Thagana Medai (Anjali crematorium) maintained by the Rotary Midtown of Madurai along with the Madurai Corporation. Madhan, as part of Rotary Midtown, is in charge of the crematorium.

Contribution to many causes

Since Madhan took over, whatever funds the Anjali Thagana Medai saves every month, has gone into serving those in need. “In a way, this means the dead are helping the living,” he says.

It started as a small gesture from 12 employees of Anjali Thagana Medai who reached out to assist those affected in the 2018 Gaja cyclone. “We had no idea how it all started, but suddenly there were discussions about helping the victims of the Gaja cyclone. Instead of contributing to relief material, one of us suggested that we build a classroom for a school affected by the cyclone. The employees came forward to contribute a day’s salary and we added the crematorium’s own money to it.” 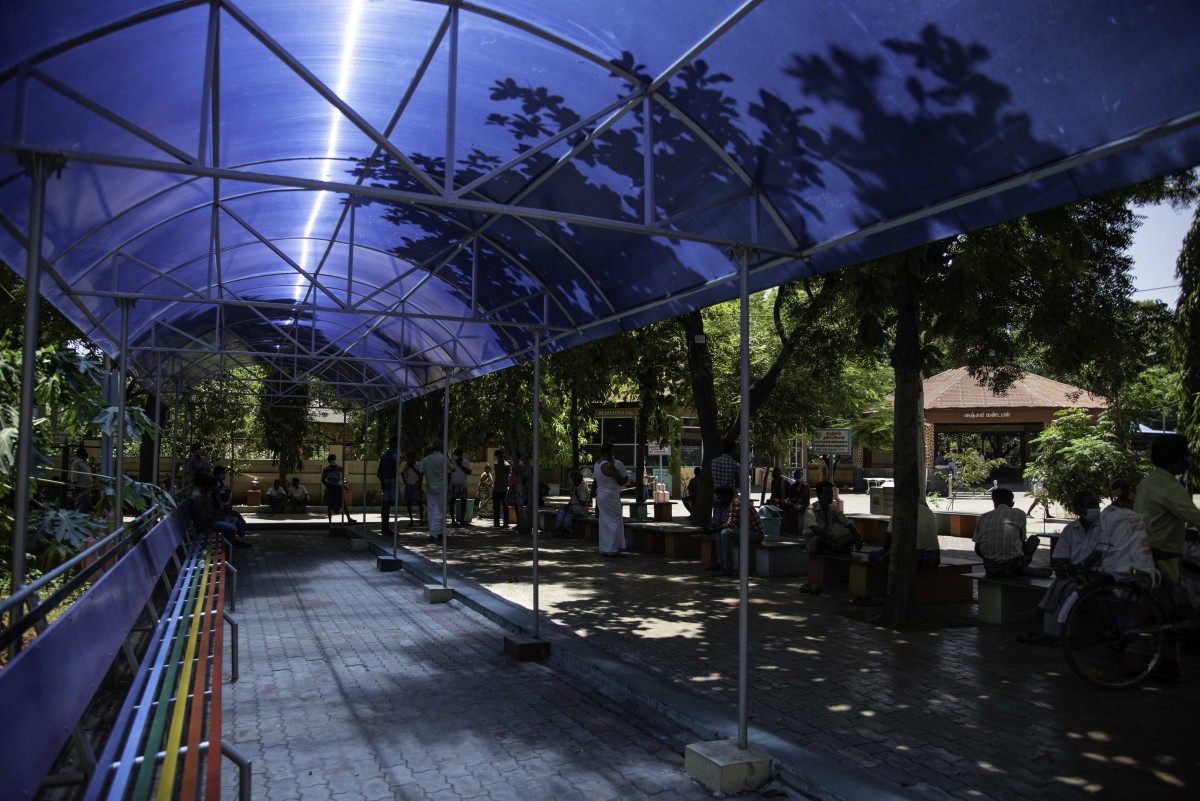 Anjali Thagana Medai is maintained well, with a lot of lung space and several amenities for those visiting it in grief. Photo: M. Palani Kumar.

Today the government school at Vedaranyam, a coastal town at Nagapattinam district, approximately 250 kms away from Anjali Thagana Medai in Madurai, has a ‘smart’ classroom, built at a cost of Rs 3.75 lakh.  The Panchayat Union Primary School at Vadamalairastha in Vedaranyam now has 95 students.

“When I joined the school in 2016, we had 16 students,” says S. Rajendran, the headmaster. “With the ‘smart’ classroom, we use YouTube videos to teach our kids and that has helped a lot. Though there was a lockdown due to COVID-19, students continued to show interest in learning.”

The primary school has won district-level awards for being the best in the locality.

The classroom was just a starting point for its benefactors.

In 2019, to mark Mahatma Gandhi’s 150th birth anniversary, some organisations came together to organise a rally. The rally covered various places Gandhi had visited in Tamil Nadu. Anjali Thagana Medai was one of the sponsors.

“We served food to students of eight corporation schools. Some teachers also volunteered to take after-school classes for students of Classes 10 and 12. At least two schools saw 100% of its students graduate. This was before COVID-19 though,” recalls Madhan.

There have also been other ways in which the Anjali Thagna Medai has reached out to the ‘living’. The funds have been used to provide inverters to two police stations, and to provide food, travel expenses and an incentive for student volunteers of Keezhadi excavations and more.

For a single cremation, the Anjali Thagana Medai charges Rs 1,350. It has around 12 employees – among whom are two supervisors, three machine operators, three cleaning staff, one security personnel and one person for housekeeping.

“After paying all of them and spending some money on maintenance, we could still save Rs 50,000 a month. Since we are not profit-oriented, we are using the money for other purposes,” explains Madhan. The monthly salary for the employees ranges between Rs 14,000 an Rs 22,000.

It was before COVID-19 that the team which took over in 2018 after a long-drawn legal battle decided to use the funds for better purposes. But COVID-19 has changed things and the number of dead bodies the crematorium has received on a daily basis has gone up drastically. 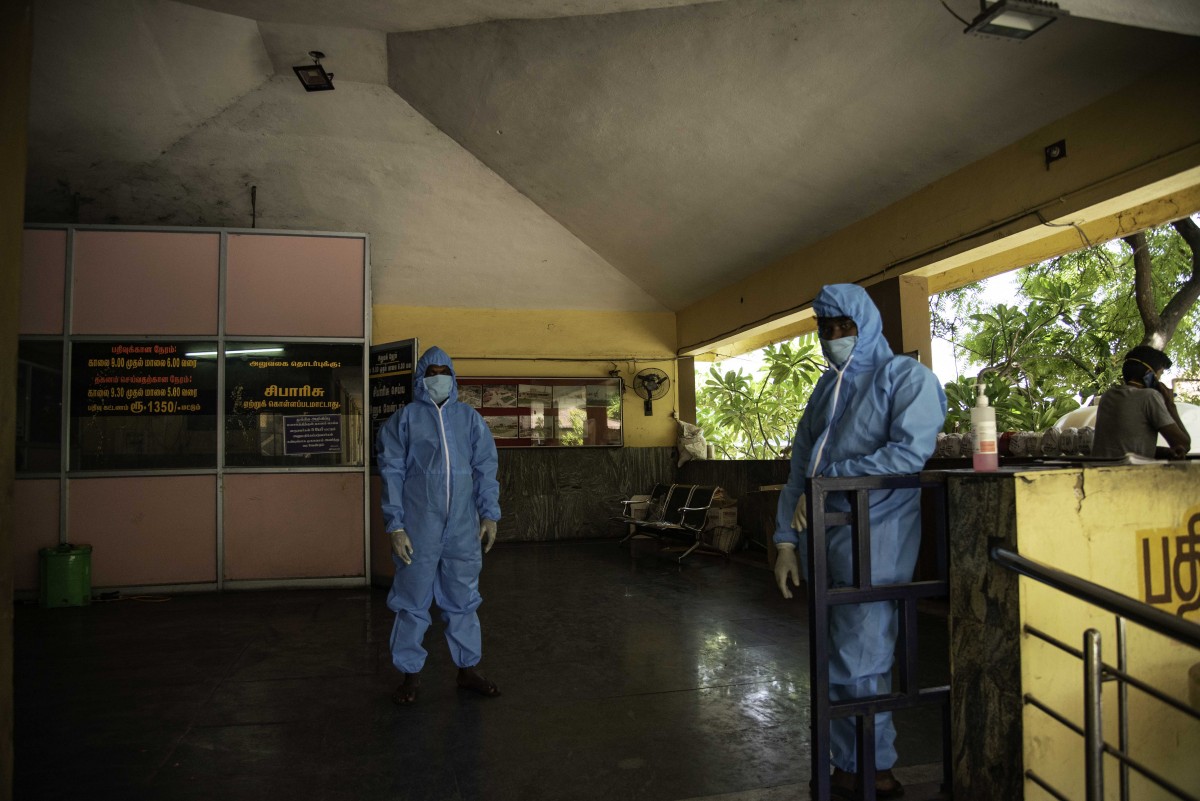 “It’s been very stressful,” admits 33-year-old R.Venkatesh, who works at Anjali Thagana Medai. “Ever since the pandemic struck, we have been handling a minimum of 400 cases every month. The situation in the second wave was even worse. But even after the second wave, we have realised that people hardly care. I really wish to drag them who roam around without masks to our crematorium and let them observe for a day. I can’t think of a better way to educate them.”

Since COVID-19 struck, Venkatesh has not gone home. Along with friends, he stays at a place close by, to ensure that he doesn’t pass on any infections to his family.

“You know what has changed with COVID-19? Earlier at the crematorium, it was different. Every death was crowded. People would come in large numbers to mourn their loved ones. It has changed now. We see the dead going without a proper farewell. We see a husband standing alone to send off his wife. We have seen children whose parents have died and they come almost alone.

A few days ago, a mother of a four-year-old passed away, he says. “A 27-year-old pregnant mother passed away and we cremated her here. She had a two-year-old. There have been many such instances. Many people could have lived longer if only we haven’t had this COVID-19. People are dying. Nobody deserves to die like this. If these deaths are capable of teaching us anything at all, it is just this: ‘Wear your masks, get vaccinated’,” says 50-year-old B. Bhoopathi, who handles cremations at the Anjali Thagana Medai.

At a distance, a cremation is happening with only two people around, and a song plays out softly.

(Their life is over, may the departed live long!
May they live long, who leave us bereft
May the eyes floating in tears dry,
Let peace be upon this place)”

After a cremation, Venkatesh and his colleagues go about watering the plants and feeding the fish at the pond. 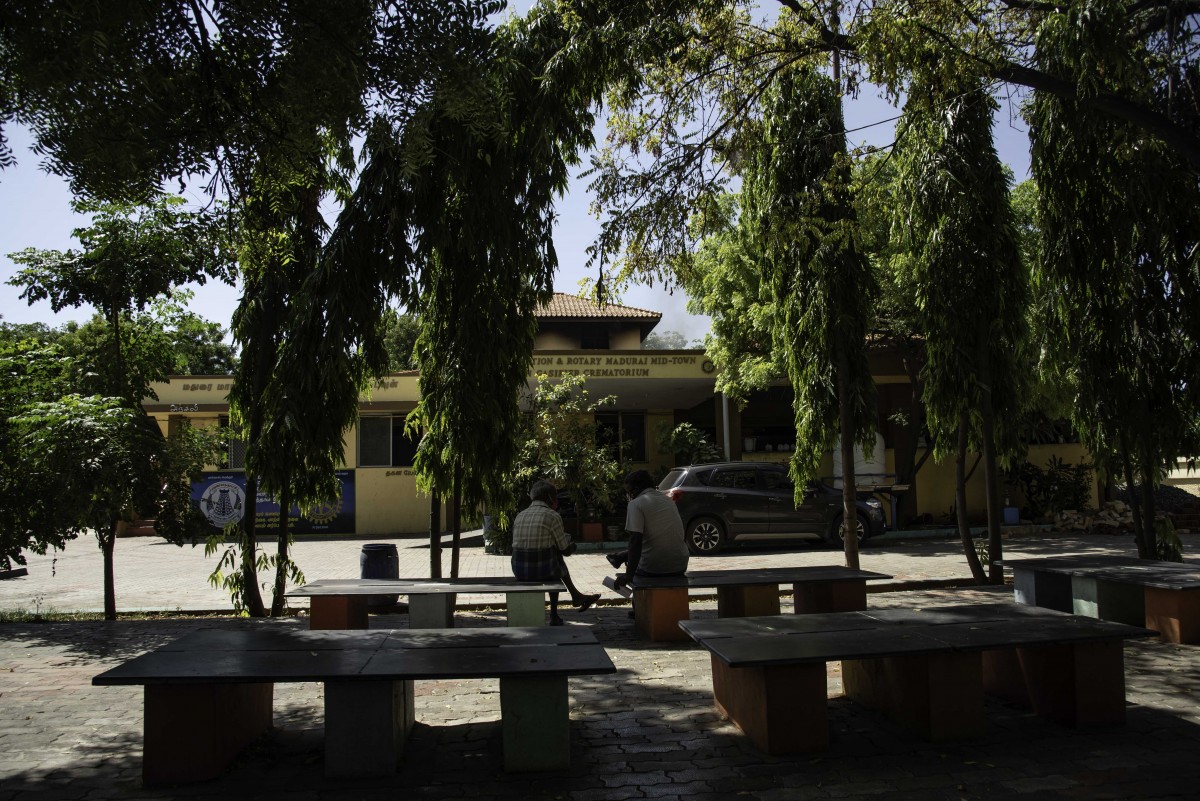 Anjali Thagana Medai has a lot of green cover, and even separate spaces to rest and meditate. Photo: M. Palani Kumar.

“In 2018, we built a place where people who come here can rest and meditate. But we also did something else. We wanted to set up a park, and then we decided to make it useful,” says Madhan.

Today, the crematorium has a green spot with a vegetable garden, with plants bearing tomatoes, eggplants and okras; fruit trees such as jackfruit, four types of mango trees, a papaya tree, three types of plantains, gooseberry shrubs, guava trees, an almond tree and others.

“The employees share all the fruits and vegetables among themselves.”

Next on Anjali Thagana Medai’s agenda is to add some colours to the anganwadi next door.

“This, we are doing with the help of Madurai Corporation. Before the schools reopen, we hope to revamp this place and spring a surprise on the kids,” says Madhan, with excitement.

“This place renews our hope in life,” says S. Venkatesan, the CPI(M) MP from Madurai. “It is sobering, yes, like any other crematorium. But Anjali Thagana Medai is not just that. In its idea of giving back to life, it has many lessons to teach. I have felt immensely inspired every single time I come here”.