In Bengal, Colourism Hides Behind the Veneer of Bhadralok Culture

The famous sense of "enlightened Bengali exceptionalism" did not quite extend to people with darker skin complexion. 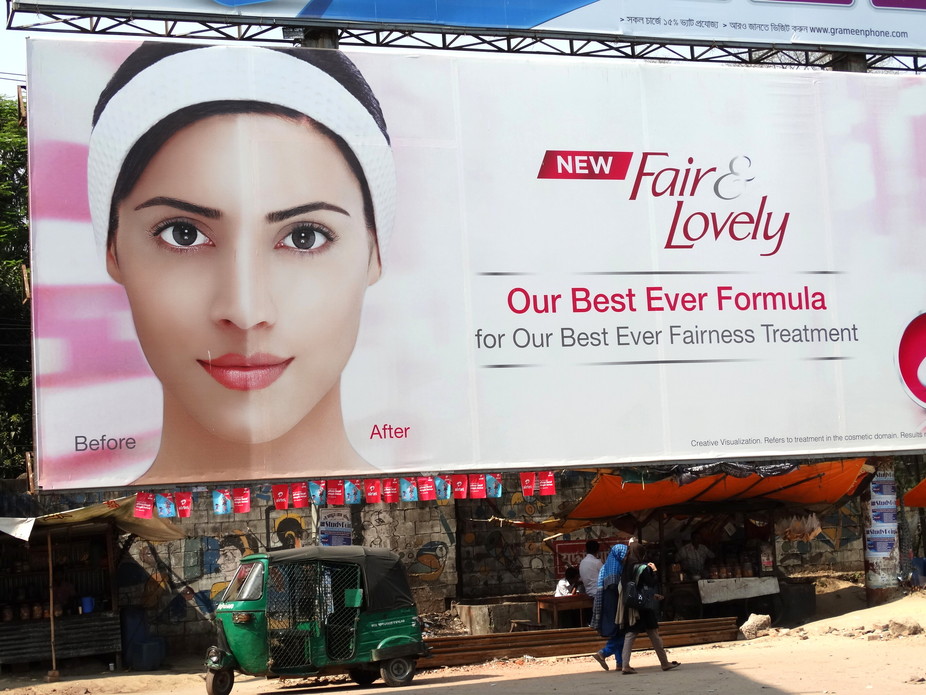 In India, a light complexion is associated with power, status and beauty, fuelling an innovative and growing market of skin-bleaching products. Credit: Adam Jones/Flickr, CC BY-SA via The Conversation

Growing up in Kolkata, I remember hearing the words “gayer rong-ta ektu moyla” (her skin is grimy/dirty) to describe women with dark-complexions. Men, though not entirely unscathed by such prevalent aversion to darkness, got away somewhat easily. The famous sense of “enlightened Bengali exceptionalism” did not quite extend to these matters. In fact, in celebrating fair skin and scouring matrimonial advertisements for ‘fair, educated, homely brides,’ Bengalis were – and continue to be – as colourist as the rest of the country.

Dark-skinned women, often forced to ‘settle’ for arranged marriages, were given the short shrift for their moyla gayer rong. Rejections based on skin colour were a normal thing, accepted without much of a demur. Dark-skinned parents giving birth to light-skinned children and vice-versa were a matter of wonder – something to be commented upon with amused derision. As with casteism, colourism then and as now, hides behind the veneer of bhadralok culture. Unspoken and unchallenged in any meaningful way, such discrimination has continued to thrive.

The West Indian cricket player Daren Sammy recently drew attention to this ‘casual’ everyday racism in India. He wanted a response from fellow Indian cricketers who called him ‘Kalu’ – apparently, a term of endearment, according to some of his colleagues. India’s celebrity cricketers, unlike celebrity sportsmen in the US, who are presently in the eye of a storm for taking a knee and rooting for Black Lives Matter, kept mum. And, of course, for cricketers and celebrities alike, silence is a habit when it comes to contentious matters that affect the lives of their millions of fans.

Racism is common across the class divide in India. If elites look down upon darker-skinned people, subalterns are not above reproach. The large consumer base for products like the by-now infamous ‘Fair and Lovely’ cream shows racism to be a gender-neutral affliction that has the power to seduce all classes. I remember buying a facewash from a local departmental store in Delhi, back in the days when we could still move around without fear of viruses and ailing health systems. The genial shopkeeper handed me a Fair and Lovely, free with the facewash. When I said I didn’t want it, he reminded me I wouldn’t have to pay for it. After my repeated refusals, he took the cream back. But it was clear from his expression that he didn’t understand the logic by which a dark-skinned woman would refuse a product that could ‘set her appearance right’.

Nowhere is racist prejudice more evident than in ways Indian society responds to people from African nations. An educated relative in Kolkata, pointing towards an African man on the street once said to me, “Ora ektu beshi kaalo (they are a bit too dark).” I remember, during my years as a reporter, spending time with a Nigerian journalist who was doing an internship with an English daily in Delhi. As we stepped out of the Press Trust of India building at lunchtime, with babus milling around the place, we found ourselves under intense scrutiny; many people bunched together in groups, openly gawking at us. I commented on how uncomfortable it must have been for my colleague to navigate a city where reactions of this kind are all too common. He smiled and said he had gotten used to the stares and sniggers.

At a classical music performance by Rashid Khan at Kolkata’s Birla Mandir earlier this year, two upper-middle class women sitting next to me made disparaging comments about the dark young woman usher. “Or mukhta dekho, dekhe mone hoi classical music bojhe? (Look at her face, does she look like she has any understanding of classical music?)”

Earlier this week, the Bengal government suspended two teachers in East Burdwan district for giving alphabet lessons from a book with racist prejudices against darker people. In a lesson aimed at familiarising alphabets through words corresponding to them, the book used the word ‘Ugly’ for ‘U,’ and pictured a dark-skinned boy for visual representation. The incident shows how ‘casual’ and ‘normal’ it has become to draw equivalences between fair skin and attractiveness on the one hand, and darkness and ugliness on the other.

“I was a dark baby, born to a mother and two grandmothers with pearly, translucent skin. I’m not exaggerating when I say that my skin tone was the centre point of all conversations in my growing up years,” writes Tia Basu. “We could begin talking about rohu, but it would end up at my skin. We could be discussing Didi and still it would somehow turn to my skin. Relatives flowing in and out of my life thought nothing of repeatedly remarking, ‘Or rong ta ektu moyla’ (Her colour is rather dirty),” she adds, returning us to the phrase I began with – a phrase millions have grown up hearing and imbibing.

All this is just skimming the surface of deep-seated tendencies in Indian society. Further, racist bias against darker skin is not the only prejudice actively at work in everyday life. There are other competing kinds of discrimination, each equally unacceptable. In recent years, especially, caste, religion and colour have all been used to ratchet up a divisive politics that exploits social fault-lines with expertise.

Also Read: For How Long Will Indians Hold on to Their Obsession With Fair Skin?

Some analysts explain racism as one of the unfortunate consequences of colonial rule, which they argue, could be one way to understand our continued enchantment with white-skin. But does Bengal’s long tryst with the British Raj cogently explain the continuance and strengthening of racism, the passion with which we still embrace whiteness while rejecting darkness? Of course, colonial history played a part – a significant part – in fuelling these feelings and tendencies. But it would be disingenuous to rest easy, thinking that we can pin all the blame for our continued fear and disgust of those who don’t look like us on colonialism.

Racism – like classism, casteism, masculinism (the list is disturbingly long) – is a structural malaise. We continue to feed these discriminatory practices, either openly or in hushed tones during private conversations. It’s too easy to think our capacity for hatred is entirely a product of someone else’s actions. Until we take responsibility for our complicity in dehumanising others, no paeans to tolerance or hospitality will count for much.