But still, 71% of all the female world leaders looked at in the study attained highest office without any family connections to politics.

Worldwide, 1 in 10 presidents and prime ministers has relatives who were already in politics. Credit: Shutterstock

Want to get into politics? It helps if you come from the right family.

Our new study, published in the journal Historical Social Research in December 2018, shows that, on average, one in 10 world leaders comes from households with political ties.

We examined the backgrounds of 1,029 political executives – that is, presidents and prime ministers – in sub-Saharan Africa, Asia, Europe, North America and Latin America from 2000 to 2017. We found that 119, or 12%, of all world leaders belonged to a political family.

Our study defined “political family” as having either a blood or marital tie to someone already involved in politics, whether as a judge, party official, bureaucrat, lawmaker, president or activist.

Family political connections mattered in all the regions we studied, in monarchies and democracies, and in rich countries and poor ones.

Power is by nature inherited in monarchies. But even in democracies – where citizens may choose their leaders in free and fair elections – belonging to a political family is a meaningful advantage. It gives candidates name recognition, some political experience and better access to allies and resources when running for office.

Bush and Trudeau, for example, were democratically elected executives who also had direct ties to that office, given that their fathers had previously served in the same role.

Technically, North America actually had the highest rate of leaders with family ties. Two of the eight presidents and prime ministers who served during the period of our study were related to past heads of state. However, since by our definition the region consists of only two countries – the US and Canada – we set it aside during data analysis because it would skew overall results.

Relatively few European leaders, however – just six of 54 – had ties to a previous president or prime minister.

Fully 11 of the 88 Latin American leaders who held office from 2000 to 2017 were related to other presidents. Jorge Luís Batlle of Uruguay had three different relatives who held the presidency before him.

Sub-Saharan Africa had the lowest percentage of executives with family ties of any region we studied – just 9%.

Asian presidents and prime ministers were in the middle of the pack regarding political families, according to our study. Twenty-three of 204 Asian leaders covered by our study had family connections to politics. Over 75% were in nondemocracies like Bhutan, Kazakhstan and Sri Lanka.

Our study also offers some interesting insights into how women worldwide get a foothold in the male-dominated business of politics.

Women who do attain highest office are much more likely to belong to political families than their male counterparts.

Argentina’s Cristina Fernández, seen in 2007 with husband Nestor Kirchner, is one of many female world leaders with a spouse or father who held prior office. Credit: Presidency of Argentina/Reuters

Nineteen of the 66 female executives in our sample had familial connections to politics – 29%. One hundred of the 963 men we studied – just over 10% – had family ties.

This suggests that family ties are particularly important for women to get into politics.

In our analysis, the endorsement of a powerful male relative – himself preferably a former president or prime minister – meaningfully helps female politicians establish their credibility with voters and political insiders.

Family ties are helpful for men, too. But there are other well-trod paths to power.

The female presidents and prime ministers who came from political families were, without exception, the first woman in their family to hold office. Their link to power was invariably a male relative, usually a father or husband.

Argentina’s Cristina Fernández succeeded her husband, Nestor Kirchner, as president of Argentina in 2007.

Corazon Aquino, who governed the Philippines from 1986 to 1992, won election after the ouster of the Filipino President Ferdinand Marcos, who was implicated in the assassination of her husband, Senator Benigno Aquino – also one of Marcos’ loudest critics. 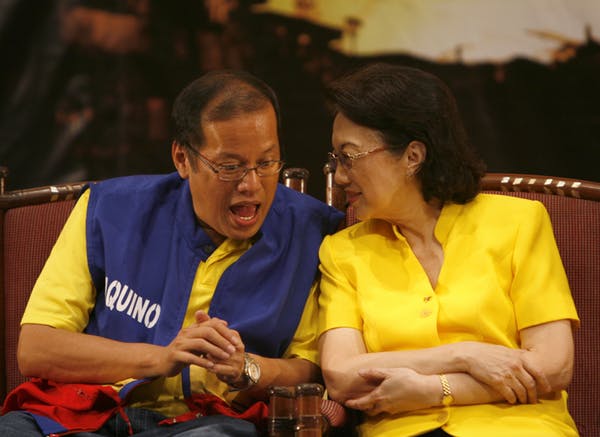 Benigno Aquino Jr. and his mother, Corazon Aquino, seen here in 2006, both served as president of the Philippines. Credit: Reuters/Romeo Ranoco

Corazon’s power then benefited her son, Benigno “Ninoy” Aquino Jr., who was president of the Philippines from 2010 to 2016.

This study certainly calls into question the notion that politics is only a meritocracy.

But consider this: 71% of all the female world leaders in our study attained highest office without any family connections to politics. That includes Croatia’s Kolinda Grabar-Kitarovic, who is the daughter of butchers. She is the first woman ever to govern Croatia, which has been around since A.D. 879.