Under influence of endless propaganda fuelled by the ruling party, a person is no longer a thinking being, but a clutch of slogans and catchwords that have taken possession of him. 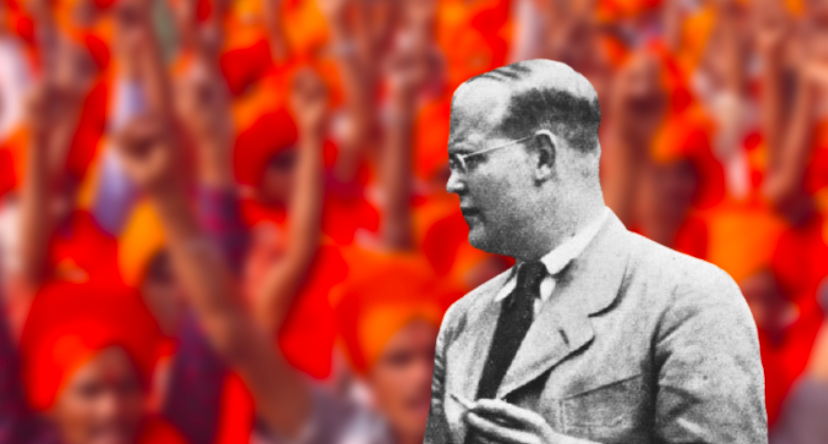 Seven and a half years of Bharatiya Janata Party rule have left India’s economy in shambles, her social fabric frayed and her standing amongst the community of nations diminished.

And yet, there are many in our housing societies, workplaces, families, and friends’ circles who genuinely believe the exact opposite. One is left wondering how such a thing is even possible.

Seventy-six years ago, Dietrich Bonhoeffer, a German theologian who opposed the Nazis, wondered something similar. How could a nation that had given the world Gutenberg, Goethe, and Beethoven possibly have embraced a madman like Hitler? Bonhoeffer thought about it long and hard. Was it a deep, hidden malice against the Jews that had finally surfaced, or had ordinary Germans simply fallen prey to Goebbels’s propaganda machinery? Or was it a combination of both?

Imprisoned (and eventually executed) for his opposition to the Third Reich, Bonhoeffer penned his thoughts on the matter in a prison cell. In an essay called On Stupidity, he said:

“Stupidity is a more dangerous enemy of the good than malice. One may protest against evil…(but) against stupidity we are defenceless. Reasons fall on deaf ears. When facts are irrefutable, they are just pushed aside as inconsequential, as incidental.”

Anyone who has ever tried to counter a fake WhatsApp with facts and logic will sadly agree. How many times have you tried, and failed, to convince the sender of a “forwarded-as-received” message that Sardar Patel’s statue does not actually contain a long-distance telescope through which Modi keeps an eye on Pakistan or that Nehru’s grandfather was not, in fact, Ghiyasuddin Ghazi of Jamuna Nahar?

In his essay, Bonhoeffer makes an important connection between stupidity and a lack of morality – “Stupidity is in essence not an intellectual defect but a moral one. There are human beings who are of remarkably agile intellect yet stupid, and others who are intellectually quite dull yet anything but stupid.”

The farmers protesting against the Narendra Modi government’s three farm laws are a prime example. Most of them are not highly educated, yet they have a deep understanding of these laws and why they are so dangerous for India’s large farming   community. On the other hand, there are highly educated, MBA-wielding corporate honchos who see nothing wrong with these laws, focused as they are primarily on maximising their own profits, and millions of farmers in distress be damned.

Bonhoeffer wrote that people “allowed themselves to be made stupid.” He also noted that those who kept a certain social and intellectual distance from the unthinking mob manifested this defect less frequently than individuals or groups “inclined towards sociability.” He surmised that “stupidity” is perhaps less a psychological problem than it is a sociological one.

Bonhoeffer also believed that every upsurge of political or religious power infected a large part of humankind with stupidity.

He considered it a given that “the power of one needs the stupidity of the other.” Under the overwhelming impact of rising power, he said, most humans tend to give up their independence and autonomy quite quickly. This has proven tragically true down through the ages, including in recent years in India.

“In conversation with (a stupid person),” he said, “one virtually feels that one is dealing not at all with a person, but with slogans, catchwords and the like that have taken possession of him. He is under a spell, blinded, misused, and abused in his very being. Having thus become a mindless tool, the stupid person will also be capable of any evil and at the same time incapable of seeing that it is evil.”

Also read: Why the Hindutva Right Is Better at Propaganda Than its Opponents

Chilling words that find resonance in current-day Indian society, where legions of  Hindutva’s ‘stormtroopers’ have been primed with propaganda to the point where they will attack anyone they are told to, either verbally or otherwise.

What then is the solution? Bonhoeffer was of the opinion that “only an act of liberation, not instruction, can overcome stupidity. Here we must come to terms with the fact that in most cases a genuine internal liberation becomes possible only when external liberation has preceded it. Until then, we must abandon all attempts to convince the stupid person.”

While one continues to hope against hope that the deluded will see state-backed propaganda for what it really is, one has to admit that the ruling party’s dominance over mass media and thus, much of the (mis)information that Indians consume, has been well-nigh total. And though free-thinking citizens and independent media outlets need to keep doing their best to counter the steady flood of government-sponsored lies and misinformation, ultimately, it will take a series of electoral victories by the opposition from now till 2024 to start ‘liberating’ Indian politics from the systemic malevolence that has taken it over.

Then, perhaps, the levels of  stupidity that have reached an all-time high will finally begin to come down.