The ceremony itself was sparsely populated keeping lockdown norms in mind, JD(S) leaders have alleged. 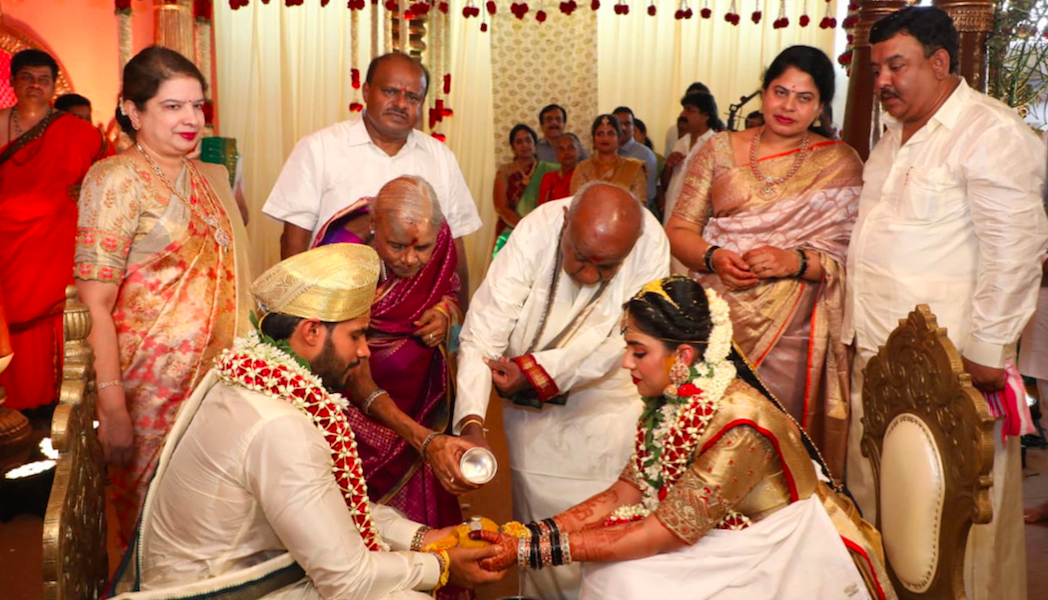 Bengaluru: Several people thronged a farmhouse on Friday to get a glimpse of the wedding of former Prime Minister and JD(S) supremo, H.D. Deve Gowda’s grandson Nikhil Kumaraswamy, ignoring appeals not to visit the venue in view of the ongoing lockdown to check the COVID-19 outbreak.

The marriage was solemnised at Kumaraswamy’s Kethaganahalli farmhouse at Bidadi in the neighbouring Ramanagara district, a JD(S) stronghold.

After the wedding was over H.D. Kumaraswamy took to Twitter to thank his party MLAs, leaders and workers for staying away from the event and blessing his son from their houses.

In a series of tweets, he said social distancing was maintained and all precautionary measures were taken throughout the event.

“At a time when the whole world is rattled with the coronavirus pandemic, the marriage was performed in accordance with the government’s guidelines of social distancing and proper precautionary measures were taken,” Kumaraswamy tweeted.

The JD(S) leader promised that once things normalise, he would throw a grand reception where “we all will sit together and have food.”

However, the BJP trained its guns at Kumaraswamy alleging that the JD(S) first family flouted the norms ignoring the Central government’s guidelines.

“The information we have is that at least 150 to 200 vehicles were given permission to attend the event.

This happened when the social workers who want to serve the badly affected poor people are not getting permission to run their vehicles,” Ramanagar BJP district president M. Rudresh alleged.

“Till now Ramanagara is safe from coronavirus and is in the green zone.

If at all the disease spreads in Ramanagara, the entire blame will be on Deve Gowda’s family,” Rudresh alleged.

He also said that he would meet the Deputy Commissioner and the Superintendent of Police of Ramanagara district and ask them how permission was granted for such a “large gathering”.

“There were only eight people on the stage to perform rituals as against the claim that people crowded the venue.

Social distancing was maintained throughout the marriage,” Sharavana told PTI.

JD(S) leader N H Konaraddi also denied the accusations saying that all the norms were followed.

“Whatever central guidelines are there, we have them followed in toto.

The social distancing norm has also been adhered to,” he said.

Sources said the family was forced to shelve grand plans in view of the COVID-19 lockdown with only close family members in attendance.

With congregation of any type not allowed during the lockdown to check the spread of coronavirus, Kumaraswamy explained in a video message earlier this week that the event will be a low-key family affair with minimum number of people.

He had also appealed to his party workers, relatives and well-wishers not to visit the venue.

According to him, after the lockdown was announced, the marriage was planned at their home here itself but since social distancing will be a challenge, it was decided to organise it in Ramanagara.

He cited Bengaluru being in the “Red Zone” with maximum COVID-19 cases in the state as also a reason for shift in the venue.