Debate: The ‘Sacrifice’ of Thinking and the Altar of Unreason

When cultural shifts that encourage superstition, and are decidedly discriminatory, emerge leading to extreme acts such as human sacrifices, the field that needs to respond swiftly is that of the liberal arts. The Elanthoor sacrifices understandably restoked the fires of the religiosity versus secular debate. Theologians and socio-political commentators denounced the act:

while influential “intellectuals” are interested only in literature and not in promoting scientific temper, the media too failed in this battle against superstition because they no longer promote “critical thinking”.

Literature promotes critical thinking because it forces us to confront humans unlike us, that ‘human’ is a plural category and everyone within the category has the right to be treated equally. Everything hinges on how we define the human, and this is the task not of anatomists or political scientists alone, but of literature which shows us this diversity. But we shall get to literature and humanities in a while. Mohammed Shafi, one of the accused in the Elanthoor ‘human sacrifice’ case, being produced at court, in Kochi. Photo: PTI

The language of ‘faith’ and ‘religion’ when employed to speak of contemporary India is positioned as antagonistic to ‘secular’ and ‘modern’. This antagonism is fuelled by the language of the state itself. Claiming ‘scientific’ achievements for ancient times, reclaiming versions of ‘discoveries’ and technologies as native – and as a matter of faith – the state constructs a discourse that feeds readily into the above antagonism.

When state discourse enters the public language and public imaginary – a shift from the 1980s and even the 1990s India – it also invokes other, less pleasant, subtextual aspects of ancient beliefs and rituals, including practices such as human sacrifice. For how does one disentangle, from the discourse of ‘ancient glories’, strands of thought that are empowering and egalitarian from those that are sexist or anti-rights?

Sociologist-philosopher Jurgen Habermas cautioned that the validity claims of any religion must ‘adapt to the authority of the sciences’. He also conceded that individuals may retain a sense of religious belonging but without abandoning their autonomy (or, by extension, free will). But what we see now – and not just in India, let us not forget the ‘intelligent design’ debate across the US, critiqued by Richard Dawkins in The God Delusion – is not a disowning of this authority of the sciences, an authority constructed and not without its own politics. Rather it is an appropriation of all sciences as always already ‘ours’.

Such discourses propose a divide between knowledge forms: native and ancient versus ‘western’ and modern, almost as though there are monolithic ‘native’ or ‘western’ beliefs (would ‘western belief’ be Catholic, Protestant or Eastern Orthodox?). Overlaps also occur even within attitudes of intolerance and offended sentiments: Saba Mahmood noted the same iconophilic strains within both religions:

the kind of relationship that many pious Muslims feel toward Muhammad, which was partly at stake in the Danish cartoon controversy, surely it is recognizable to scholars of Christianity (with its long and rich tradition of the Eucharist and Corpus Christi), Eastern Orthodox Christianity, and late Antiquity?

critically about whether the sense of injury that derives from this sort of religiosity is translatable into a language of rights, and whether understanding this sense of injury is something worthy for the ethical and political life of a religiously diverse society.

The ‘language of rights’ is precisely what has been abandoned in toto with the rise of the language of hurt sentiments but also because in the era of mythic pasts and post-truth.

What counts as religion itself has been constructed in specific contexts and for particular reasons, notes Talal Asad:

It was late nineteenth-century anthropological and theological thought that rendered a variety of overlapping social usages rooted in changing and heterogeneous forms of life into a single immutable essence, and claimed it to be the object of a universal human experience called “religious”.

He further argued that when we speak of religions we need to ask ‘questions about what the definition includes and what it excludes – how, by whom, for what purpose, and so on’. These are questions, in our context of the widespread use of exclusionary rhetoric, we need to ask now for clearly, some humans can be sacrificed.

Several of these questions are the province of fields in the human sciences, intellectual history, even discourse studies and of course literature. Here we find the eschewing of hagiographies and instead a focus on histories of religious thought, complete with anthropological inquiry.

Also Read: Whither, in the Name of Religion, Goes the Voice of Reason?

Every increase of rationalism in empirical science increasingly pushes religion from the rational into the irrational realm; but only today does religion become the irrational or anti-rational supra-human power.

This categorisation of religion as ‘irrational’ moved religion into the realm of the private as well. But the World Values Survey is illustrative. For the 2017-2022 period, people of many countries agreed that religion was ‘very important’ to their daily lives. In terms of percentages, 37% of Americans agreed. Indonesia, Nigeria, Egypt and numerous countries showed more than 50% of the population agreeing. Only in the Netherlands, New Zealand, Norway, Lithuania, South Korea, Iceland, Hungary, Denmark, Austria, Azerbaijan, Australia and a few other nations was this percentage less than 20%. In their comment on this ‘cultural map’, political scientists Ronald Inglehart and Christian Welzel noted two major dimensions of cross-cultural variation in the world: traditional values versus secular-rational values; survival values versus self-expression values. They defined Traditional values as

Emphasiz[ing] the importance of religion, parent-child ties, deference to authority and traditional family values. People who embrace these values also reject divorce, abortion, euthanasia and suicide. These societies have high levels of national pride and a nationalistic outlook.

On the traditional/secular dimension, the United States ranks far below other rich societies, with levels of religiosity and national pride comparable with those found in some developing societies… The Swedes, the Dutch, and the Australians are closer to the cutting edge of cultural change than the Americans…

‘The cutting edge of cultural change’ is an apposite phrase because with the rise of the discourse of ancient traditions and their glories what is lost is the capacity for cultural change, unfitting our next generations for a rapidly changing world when they are asked to return to roots and supposedly stable values.

And yet, in the past, faced with crises and extreme events, even theologians have responded in interesting ways. One thinks of Pope Francis’s Laudato Si’ (2015), with its subtitle, ‘on care for our common home’, in which he pronounced ‘Climate [is] a common good’, and the Islamic Declaration on Global Climate Change (2015) as examples. Just as the scientists drew our urgent attention to the climate crisis, so did religious leaders. Calling for changes in the way we live – especially fossil fuel consumption – these tracts were attempting to effect cultural changes. They were not just spouting back-to-scriptures rhetoric, but actively promoting critical thinking and an environmental consciousness that is humanistic in spirit.

When cultural shifts that encourage superstition, and are decidedly discriminatory, emerge leading to extreme acts such as human sacrifices, the field that needs to respond swiftly is that of the liberal arts. 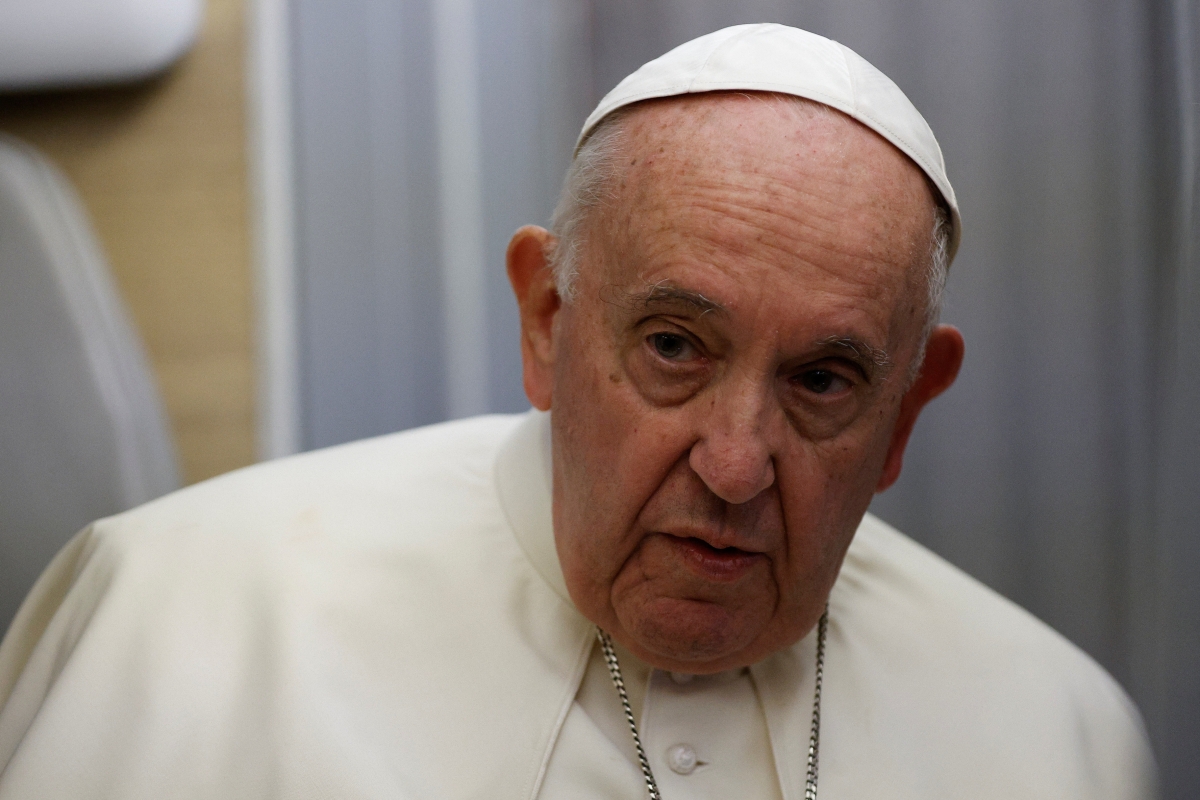 Pope Francis speaks to journalists aboard the papal plane on his flight back after visiting Canada, July 29, 2022. Photo: Reuters/Guglielmo Mangiapane

For cultural change ‘critical thinking’ is indispensable. The language of rights, dignity and autonomy helps rethink what it means to be human, a citizen, a community. In Heidi Bostic’s pithy phrasing, humanities explore the ‘basic issues of meaning, purpose, and value’ and ‘fundamental questions at the heart of humanistic inquiry: questions that the humanities confront….Who are we and how ought we to live?’ Following from these, how have returns to mythic pasts, the designation of some people as nonpersons and disposable persons, are matters of concern for the Humanities because it concerns how we as a people ought to live.

Those sacrificed were treated as disposable humans, and this is where our myths have something to answer for: how did we retrieve beliefs that, in the age of science and democracy, enabled some to consign fellow humans to the category of the disposable? What have we imparted as frames of perception? How have we manufactured memory in terms of cultural heritage management that congeals the public imaginary around ‘us’ and ‘them’?

Such a management is the organisation of perception which can lead, as Diana Taylor argues about the collective refusal to observe the cruelties around us, to percepticide. If we see the recent acts as just ‘perversions’ or ‘superstition’ then we wilfully miss how a train of thought has now appeared, valorising myths and post-truth ‘facts’ as acceptable and even respectable, and which will at some point call forth expressions of this heinous sort as well.

It is not, as Sunny Kapikad noted, an isolated incident but a reflection of a larger malaise and cultural resurgence of a certain kind. In this, Kapikad echoes the oft-repeated comments that the 2004 Abu Ghraib tortures and torturers were not just kinky individuals but a product of the American system that normalises violence and racism. The context legitimises and valorises stories and practices that then produce extreme acts, unthinkable acts that destroy the Other human. It is how we perceive the Other that allows, sanctifies and necessitates the destruction of the Other.

And it is within the liberal arts, specifically literature, that we learn how to perceive the Other, with outsiderhood.

As we set about fragmenting the disciplines into diploma and certificate courses in the name of interdisciplinarity and flexibility, preventing the young from acquiring a solid foundation in any discipline, the capacity for critical thinking is eroded. Where sustained reflection, deep reading and diversity of scholarship – the basis of the Humanities – are necessary more than ever, what we are attempting is minimising detail, shortcuts into a discipline and superficial jargon usage. There is no need, apparently, to examine the plural and sometimes problematic histories of an idea or ideology, the subtexts of a discourse.

A nation that abandons reflection for trendy myths and catchy teaching programmes that refuse groundedness in concepts, frames of perception and (untrendy) ideas of rights, when public discourse turns on emotional truth and unverifiable myths, when disciplines like the liberal arts are rendered ineffectual systematically, atavistic practices such as Elanthoor will return.

Sometimes the death of a discipline that offers the last of the grand challenges to the way we live heralds the death of the idea(l) of a nation.