A Tale of Two Durgas: Cardi B and the Narrowing World of What Can Be Meddled With

We make mistakes when we try to engage openly and honestly with new peoples in our midst, and their practices and ideas. That’s part of being human, and curious. 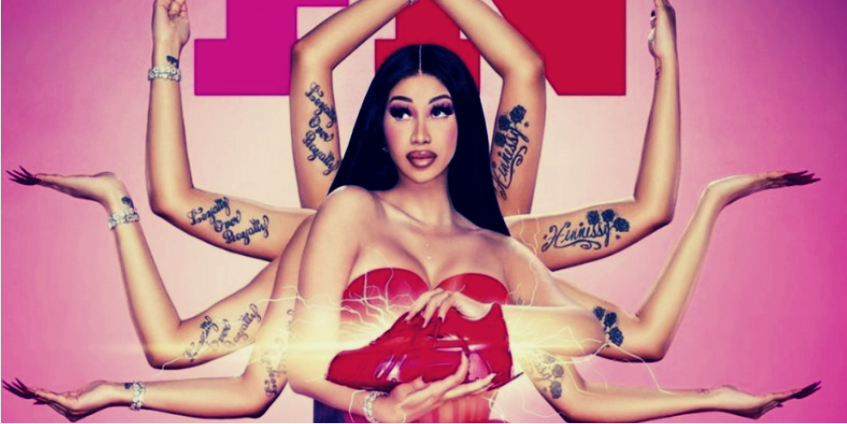 The controversial Cardi B ad.

Maa Durga is having a moment in American culture, but some Hindus are none too pleased about the extra attention afforded to their goddess of war. And yet, despite Durga’s divine strength or shakti, her reputation is thought by some to need protection.

Before the recent and historic election of Kamala Harris to the Vice Presidency of the United States, there was a cultural dust-up over a Hindu-oriented meme. Her niece, Meena Harris, circulated a caricature with Kamala’s face superimposed on the goddess, showing Kamala-as-Durga wielding a trident to vanquish the evil demon Mahishasura – featured here in the guise of President Donald Trump.

There’s more to the meme: Joe Biden’s shouting face is superimposed on the body of the lion – Durga’s celestial Uber – on which she rides. The leonine Biden mauls Trump’s bloodied thigh, as the demon-president grimaces in pain. American Hindu rights groups, who are known to be sensitive about their religious imagery, were appalled by the satirical depiction, calling it “disrespectful” and “blasphemous.” Many noted that the cartoon was disseminated at the start of Navratri, a festival themed around the victory of good over evil, making it (in their view) all the more egregious to use Hindu iconography against a sitting president in pursuit of a political agenda.

Some vocal social media users went a step further by calling it a deliberate act of cultural appropriation and suggested that the image was a misguided attempt to woo Hindu voters “by mocking us.” If so, it was certainly not a particularly pressing strategy – according to analysis by the Pew Research Center, Indian Americans (of whom about 50% identify as Hindu), are the most likely to be Democrats of any Asian-origin group.

Meena Harris deleted the tweet but did not apologise. The Hindu American Foundation proceeded to issue “guidelines” for commercial use of religious imagery. There were some not-so-subtle accusations that the Vice President-elect was abusing her multicultural identity for political ends. (Note that while Kamala was raised Hindu, she has professed to be a practicing Christian.) The Biden-Harris campaign, for its part, flatly denied having anything to do with the internet collage.

Then came a second Durga debacle. This time, the rapper Cardi B came under fire for imitating the goddess in an ad promoting her first sneaker collaboration. The Bronx-born musical icon is depicted with the Hindu deity’s signature multi-armed gravitas, her face in a demure pout, wearing an outfit that bares immeasurably more cleavage than the average image of Durga. The outcry was swift and decisive. 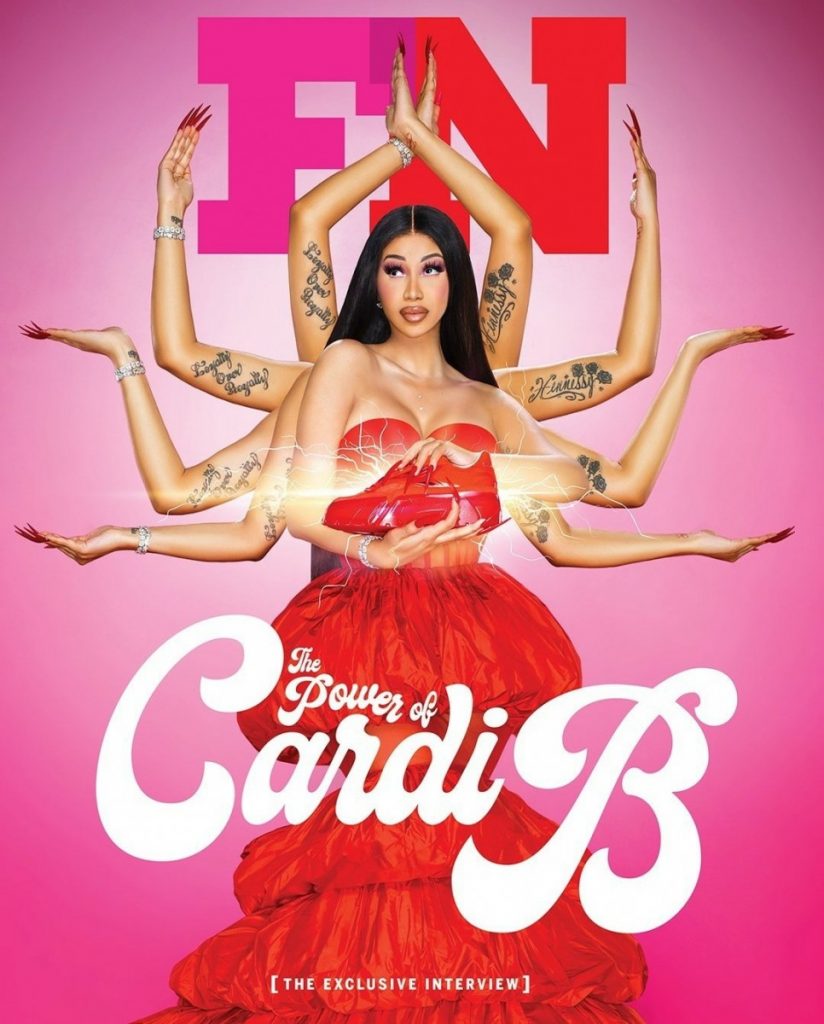 First, there were the literal visual issues: bare shoulders and, in lieu of weapons, a red athletic shoe held in two hands like an offering. (Sneakers, or footwear of any kind, are not permitted in Hindu temples.)

Yet, the representational and aesthetic concerns were grounded in a more fundamental objection – the use of sacred iconography for commercial gain in the sale of a seemingly frivolous consumer product.

Would a different understanding of the value of sneakers in an American context – especially in the Black community – help to reframe the conversation? The history of footwear in the US runs parallel to the nation’s legacy of Black cultural appropriation and exploitation – certain sneakers, and Air Jordans in particular, became emblems of Black excellence and vehicles for both appropriation and aspiration.

As the American author and scholar Michael Eric Dyson wrote in an essay in the 1990s:

“The sneaker reflects at once the projection and stylization of black urban realities linked in our contemporary historical moment to rap culture and the underground political economy of crack, and reigns as the universal icon for the culture of consumption. The sneaker symbolizes the ingenious manner in which black cultural nuances of cool, hip, and chic have influenced the broader American cultural landscape.”

I’d argue that although sneakers are no longer a “universal icon for the culture of consumption”– we have curated Instagram vacations and Pelotons for that – they hold a special place of respect in the ongoing story of American multiculturalism. Put bluntly: Sneakers may not be a traditional religious symbol but they are revered by many. When Cardi B’s creative team suggested she “pay homage” to Maa Durga, she did so with the intention of emulating “a goddess that represents strength, femininity and liberation,” a fitting allusion for the no-holds-barred, self-made superstar introducing the world to an important next step in her professional evolution.

Following initial calls of appropriation, however, she immediately apologised and the publication removed the advertisement from its social media portal and website. She promised to do better research in the future. If this means that she may not want to engage with Hindu imagery going forward, that would be a shame.

Yet the line between cultural appreciation and appropriation is fraught, especially in countries where multiculturalism is recognised in principle but not always in practice. We make mistakes when we try to engage openly and honestly with new peoples in our midst, and their practices and ideas. That’s part of being human, and curious.

In the case of the political image of Trump’s being slain by trident, the concern was perhaps understandable. The meme seemed designed to rile partisan instincts and, at best, to score a cheap laugh. Content creators should proceed with caution and lead with respect when dealing with the cultural tumult of representative democracy.

Art unrelated to propaganda is more complex. In the case of Cardi B, it was easy enough to toss the ad and move along to prevent a PR headache. But is that how we want to measure creative value? As our digital meanderings lead us into new and awkward territory, we’d all do well to remember that respectful cultural representation is subjective – even though, ultimately, our border-crossing missteps can lead to enlightenment. Thanks to Cardi B, millions of fans now know that Maa Durga is not to be meddled with.

Katherine Finnerty is a New York-based journalist. She tweets at @kpfinnerty