Better Sorry Than Shave: In India, the Moustache Is Serious Business

Moustaches are an enduring symbol of maleness on which hang pride and social standing. In India, however, they also dictate caste equations, employment and how we see law enforcement. 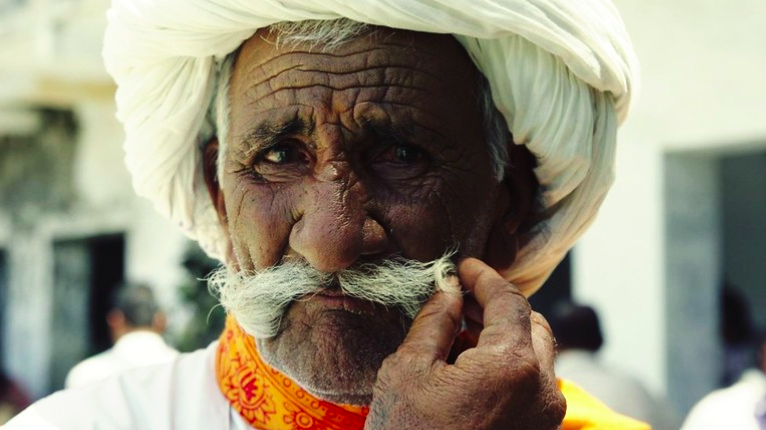 Moustaches are not just a fashion statement in India, but an integral part of tradition and folklore. They are closely associated with respect, privilege, honour and above all machismo.

Ministering to the hairy upper lip is a hoary practice diligently and lovingly observed, especially in Punjab and Rajasthan, where a large proportion of males ably perpetuate the established colloquial truism: Muchh nahi, puchh nahi. He who has no moustache has no standing.

In both states moustaches remain an enduring symbol of maleness on which hang pride and social standing. ‘Real man’ moustaches in Punjab amongst the Sikhs, for instance, are those that can balance a small lemon on their upturned ends. This also identifies them as ‘nimboo nachod muchh’ or those with lemon-squeezed moustaches, as the motion of twirling them is akin to extracting juice from a lemon. 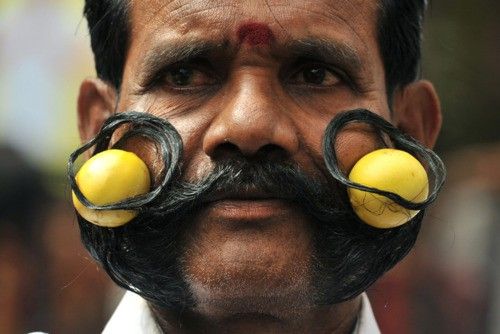 Loss of face in both states, like elsewhere across the country, is likened to cutting off the moustache. This is widely considered an unpardonable insult that can, and often does, lead to prolonged feuds. There are innumerable folk tales that recount with great detail how an enemy was humiliated and humbled by having his moustache shaved off by an antagonist and the vendettas this spawned.

Even the Indian state is captivated by the moustache.

Some years ago, policemen in Madhya Pradesh were paid a monthly allowance of Rs 150 to grow moustaches, as senior officers believed they bestowed gravitas and authority upon their force. The officer who introduced this special allowance, believed that whiskered lawmen generated a positive and masterful aura, which in turn spawned respect for lawmen.

He hit upon the cash-for-moustaches idea following a seminar attended by district policemen and local residents. Constables with moustaches in the gathering, he observed, were looked upon with particular reverence. This led to him encouraging his force to grow them. The allowance was merely a ‘sweetener’.

Over time, these mustachioed policemen came to subtly occupy an unstated, albeit higher status in the state, but senior officials kept a vigilant eye on the shape and size of their whiskers, mindful that they did not look too intimidating. Only “proper” moustaches were encouraged, ones that twirled rakishly along the upper lip. Bushy handlebar models were permitted, but only if they did not look overly menacing or challenging.

Policemen were discouraged from duplicating moustaches sported by Bollywood villains, often portrayed in films malevolently stroking their whiskers, whilst either torturing their victims or looking malevolently at women.

Moustaches have even resulted in legal battles in India.

One such case involved Joynath Victor De, a flight attendant with the erstwhile Indian Airlines flight attendant who was grounded for refusing to shave off his luxurious handlebar moustache. In 2008 the airline said De’s precious asset was a health risk, especially as he handled food, besides unnerving passengers.

“My moustache is me,” the attendant maintained, determined to keep and flaunt it. Supported by his flight attendant wife, he took the prickly issue to the Calcutta high court which ruled against him after months of rumbustious, amusing and learned arguments on facial hair. Later, the Supreme Court also upheld his termination.

“I never dreamed of trimming it,” De had declared. He said it had taken him 25 years to grow and attracted nothing but admiration, especially – or so he believed – from women passengers.

Meanwhile, several years after being shot dead by police in 2004, India’s most notorious but fiercely bewhiskered bandit was resurrected by a UK-based cosmetics manufacturer on the lid of its moustache wax jar. That became an almost instant hit.

Just stumbled upon one of the strangest ads I have ever seen. A US company, Lush Cosmetics once used notorious dacoit Veerappan's image to promote Moustache Wax. The ad line went “Add a daring and debonair twist to your facial hair with our vegan moustache wax." pic.twitter.com/f3a4CrGic4

Lush Cosmetics, that closed its India operations in 2013, launched Veerappan Moustache Wax after naming after the outlaw responsible for murdering around 120 people and poaching over 200 elephants for their ivory in Tamil Nadu and Karnataka. Eventually shot dead in a police ambush, Veerappan kidnapped rich and famous people for ransom and cut down hundreds of hectares of sandalwood forest to smuggle out the agreeably scented and valuable wood that is gradually becoming extinct.

But, from atop Lush’s moustache wax jar, the brigand rakishly urged customers to ‘add a daring twist’ to their facial hair for just $15.95. Packed with nourishing waxes and oils, including sandalwood extracts, the wax potion in its online advert promised to make “whiskery kisses all the more memorable”. At the time Lush could not have got a better moustache than Veerappan’s awesome whiskers to exhibit and promote its popular male product, that also claimed to ‘work wonders to soften (hair) split ends too”. 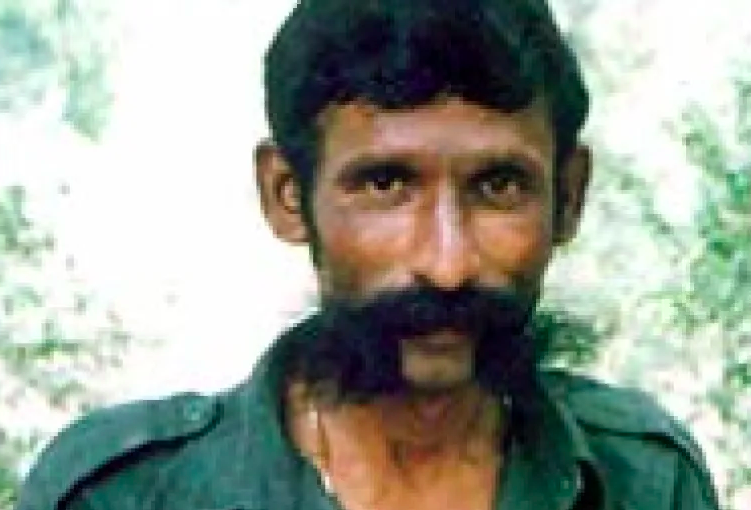 The bandits’ moustache almost entirely concealed his lips, its thick hairy oversized ‘pillars’ dwarfing his face and hanging carelessly like well-trimmed bushes off the edge of his chin.

A journalist who spent time with Veerappan in the 1990s said he daily lavished elaborate care on his moustache, treating it with special oils and herbs, before lovingly combing and rolling it round his fingers to give it a stylish droop.

But within a short time of it being launched, the moustache wax triggered online protests demanding that Lush not glorify Veerappan’s banditry. It asked for the product to be renamed. Lush, however, closed down its operations in India in December 2013 thereby putting paid to the bandit’s moustache controversy.

Much like Veerappan, India’s fabled Chambal dacoits in the Fifties and Sixties favoured luxurious moustaches too. Numerous fables surrounded their abundant hairy upper lips upon which they also bestowed attention, greatly conscious of the effect their moustaches had on their victims and benefactors.

In 2018 Dalits in Gujarat launched a social media campaign in support of moustaches, after some ‘upper’ castes violently objected to them sporting whiskers. Their crusade was initiated by several hundred Dalits in Gandhinagar, after one of them was stabbed and another beaten up by some Rajputs for wearing moustaches. The latter, evidently, thought a hirsute upper lip was an exclusive marker of their own so-called superiority.

This, in turn, prompted hundreds of Dalits to tweet pictures of their moustaches using the hashtag #MrDalit and #DalitWithMoustache. Ironically, instead of repressing Dalits, the ‘upper’ caste Rajputs’s actions achieved just the opposite and rendered the upturned moustache as the symbol of Dalit defiance.

In India, mustaches can be a matter of life or death. We talked to Dalit activist @jarariya91#MrDalit #DalitWithMoustache pic.twitter.com/bvQUjQYnhq

And not to be left behind, Telangana chief minister K. Chandrashekhar Rao in 2017 made an offering of a pure gold moustache at the Kuravi Veerabhadra Swamy temple in his state’s Mahabubabad district. KCR, who like most Indian politicians, is superstitious, is believed to have spent Rs 60, 000 on the unique moustache offering, which was well received by the laity.

Earlier, under colonial rule soldiers in the East India Company army, recruited mainly from Oudh, Punjab and southern India firmly believed that moustaches signalled manliness and clean shaven British invaders were not to be trusted. The latter soon got the message and began an en masse campaign to grow moustaches, alongside beards and side-locks, to reinforce their masculinity and attendant authority over their native recruits. In fact, few illustrations of British or other European soldiers in the late 19th century show them without facial hair, demonstrating how successful the locals were in influencing Company Bahadur personnel in sporting facial hair.

Fast forward two centuries to early 2019 when the amply moustachioed Indian Air Force fighter pilot Abhinandan Varthaman was captured by the Pakistani military after his MiG-21 was shot down over Kashmir after a dogfight with a Pakistan Air Force F-16. Abhinandan became a national hero within hours. His handlebar moustache was also celebrated.

The dairy giant Amul, known for its catchy adverts on topical social trends, made a video that went viral celebrating the fighter pilot’s moustache. Several hair cutting saloons across India offered free haircuts and moustache styling to resemble Abhinandan’s. At the time the BBC news website declared that the pilots moustache had become synonymous with ‘courage and patriotism’ with scores of Indians wanting to emulate Abhinandan’s facial handlebars.

In conclusion, some men with a mid-life crisis end up buying a Harley or a souped-up Triumph to overcome it. ‘Real men’, on the other hand, grow moustaches and get over it. Or as they say in Punjab: Much nahi, kuch nahi. If you do not have a moustache, you have nothing.