From Kashmir to boycotting Chinese goods to the Ayodhya temple, the brand has complemented the BJP uniquely. 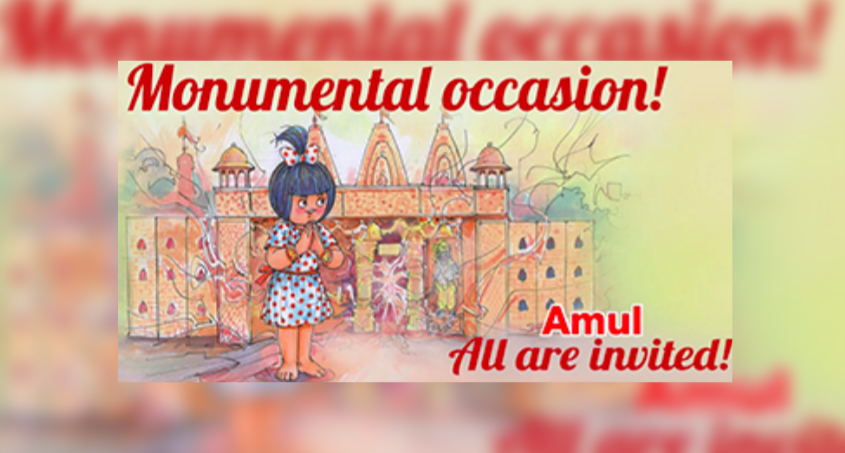 Amul's ad on the occasion of the Ram temple bhoomi puja.

The ad campaigns of Amul Butter have been part of India’s cultural landscape for decades.

They began in 1966, and the cute Amul girl on the hoardings became a powerful mnemonic – she’s always in the ad, and without saying much, conveys the message of the product, so much so that the butter often doesn’t even get mentioned.

Over these last 50 years, these ads have been cheeky and amusing, capturing not just the news of the moment but also the mood – cricket and Bollywood have been particular favourites. They can be slyly political too, even to the point of being critical – in 1976, during the Emergency, an large hoarding showed the Amul girl dressed in a nurse’s uniform, holding a tray with a packet of butter and licking her lips, with the caption, “We’ve always practiced Compulsory Sterilisation.” It was a clear comment on the family planning sterilisation programme being pushed by Sanjay Gandhi.

The agency got away with it because Dr V. Kurian, the legendary ‘milkman’ whose co-operatives produced Amul, totally backed Sylvester da Cunha, the agency boss. Mrs Gandhi too did not intervene.

But those days are gone. Lately, its fans have noticed that the Amul ads have been less sharp where the government is concerned – in fact, they are very close to the government’s and the BJP’s view.

The latest one, showing the Amul girl with her hands piously folded in front of an image of the Ayodhya temple, is captioned-“Monumental occasion: All are invited.”

“Abki Baar Bhajap Sweekar: Party favourite,” when the BJP won in 2014, was another. 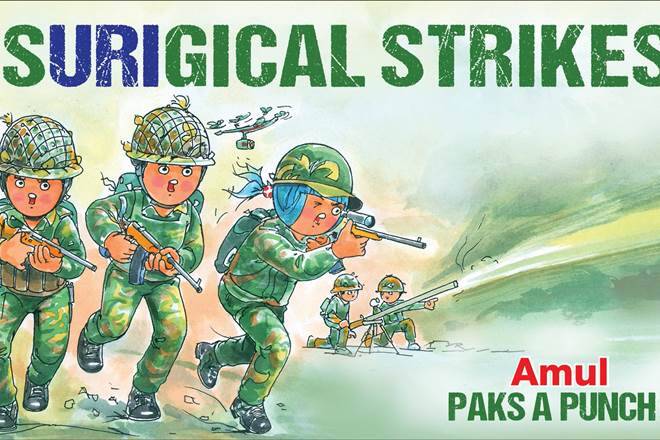 Supporting the ban on Chinese products, the ad said, “Exit the Dragon,” showing the girl angrily ordering a fire-breathing dragon out, while the caption at the bottom read, “Amul Made in India.”

This alignment may, of course, not be the BJP’s doing and the ad agency and its clients may genuinely think they are doing little more than merely exploiting consumer recall. But the Gujarat Co-operative Milk Marketing Federation, the apex body of milk co-ops, which markets Amul, has always tempted local politicians and Narendra Modi has been particularly interested in it from as far back as in 2004. Since then, Narendra Modi and the BJP have taken control of the milk co-operative sector and of the Federation.

It’s a fair assumption that this may have something to do with the more recent campaigns of Amul, which is a Gujarat-based brand. The BJP under Modi rarely lets go of any opportunity for self-promotion.

It has innovated on a grand scale by leveraging every possible platform. Nothing is too small or trivial to let go of blatant and subtle (to the extent possible) promotion of Narendra Modi, his government, the BJP, and all the other key elements of the Hindutva project. The latter ranges from the greatness of Hindu religion and Indian culture (the two are often conflated), to the ancient wisdoms of this land and most of all, to the ‘heroes’, i.e. soldiers, guarding the borders of Bharat Mata. 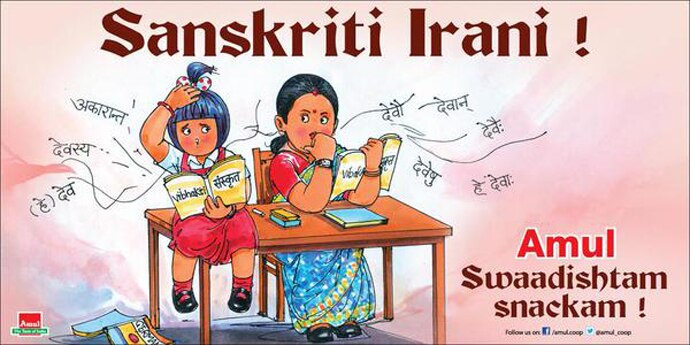 Its not as if Amul has not been critical, even if tangentially – Smriti Irani’s decision to replace German with Sanskrit won her the sobriquet Sanskriti Irani; in 2015, the hoarding read “Taalerance se Taalerance Mila,” in response to the debate about intolerance; the same year, it referenced the controversy about the Dholpur palace in Rajasthan, whose status was converted by Vasundhara Raje Scindia to benefit Lalit Modi, by showing her handing over a photo to him under the caption, “Property of Rajesthan?” 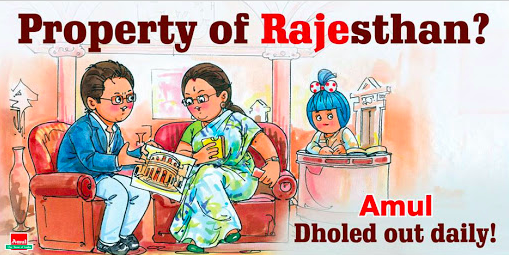 Five years later, the situation is very different. The BJP’s marketing is in full throttle and the second victory has given it a new confidence and aggressiveness. There is little room for dissent. And every tool available and willing has to be deployed in the greater glory of the party, its programme and most of all, its leader.

The older methods – newspapers and television channels – are in any case supportive of Modi. Media owners and journalists are ready to do his bidding. The vast, paid troll army beavers away producing more and more outrageous lies to swamp the social media.

But which other party has thought of slipping in a subliminal message in a television soap?

Or on low cost medicines as part of a government scheme?

The BJP understands the value of advertising and would see the advantages of aligning with a hardy, much loved brand that has been around for decades. The brand custodians on their part may be quite happy to do this and keep the bosses happy, given that their Twitter account posts them regularly. Or they may have little choice in the matter. As far as the agency is concerned, it has to go by what the client says and approves – its best creative minds have to fulfil the brief.

And most of all, such advertising is fully in consonance with the mood of the brand’s consumers. A few may carp and some angry people on social media have also vowed never to buy Amul products, but this won’t make any dent in the product’s sales.

Now, if the Amul girl ever were to take a dig against Narendra Modi, the brand would get hit with a massive, organised boycott which would be difficult to get out of. It’s not a difficult choice to make.