"The incident at Galwan could only have happened because of failure at one or more levels." 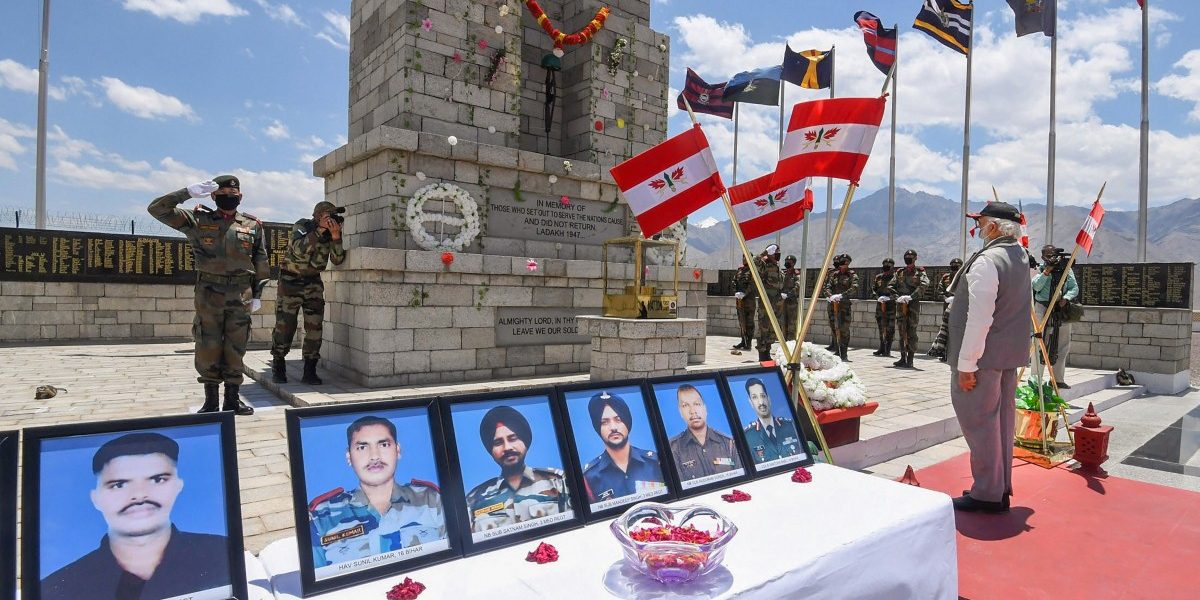 New Delhi: As many as 144 veterans of the Indian Armed Forces have written a joint statement on the situation at the border with China in Ladakh, drawing attention to failure in the “political, civil and military establishments” that led to the continued swirl of rumours on the issue and the loss of 20 soldiers’ lives in the violence at Galwan Valley.

The signatories include members who have served in the defence of the country in various ranks and appointments in peacetime and in operational or war zones over the past several decades.

“The incident at Galwan could only have happened because of failure at one or more levels in the political, civil and military establishments, especially in continuous intelligence acquisition and dissemination,” they write.

The statement calls for greater clarity in the process of dissemination of information in border standoff situations.

“A formal statement issued by the Army or by Government soon after the unfortunate Galwan incident…would have laid rumours and guesses at rest. It would have prevented China from taking advantage of contradictions between ambiguous or inaccurate verbal statements needing later clarifications,” it said.

The veterans have also pointed out that India urgently needs a stated national policy and strategy on neighbourhood management, concerning all India’s immediate and more distant neighbours, but especially China and Pakistan. The neglect towards forming this policy, stress the signatories, has led to the situation that has resulted in this violence, they wrote.

“We further urge that in the domestic context, proactive steps be taken to use non-electoral political tools of consultation…,” the statement reads. This, the veterans say, will help the government machinery devote effort towards the betterment of life within the country and also allow for the Army to be deployed where it is needed most, the border.

Also read: ANI Tried to Discredit Veterans’ Appeal to President – but Proof Was a Click Away

Using the Army in its secondary role on internal security and counter-insurgency duties, and the Central Armed Police Forces (CAPFs) in an essentially military role at the border allows for a reversal of roles and duties that the statement calls ‘anomalous’.

Significantly, the statement stresses that continuous military engagement in any region can never be the solution and urges the powers that be to arrive at political understandings.

The complete text of the statement, along with the signatories’ names is below.

We, the signatories, are all Veterans of the Indian Armed Forces, who have served in the defence of our nation in various ranks and appointments in peacetime and in operational/war zones, over the past several decades.

We do not represent any group or political party, and each of us only has the best interest of our country and our Armed Forces at heart in making this Statement. We therefore request that our respectful comments, requests and urgings in the following paragraphs be taken in that spirit alone.

1. The Chinese PLA build-up in Galwan and other places in Aksai Chin, and the recent events in the Galwan Valley in Ladakh, have raised very serious concern among Armed Forces Veterans.

2. The loss of twenty Jawans, including the CO, Colonel Santosh Babu, on June 15/16 in the Galwan valley is deeply disturbing and raises many questions. The earlier incident in Eastern Ladakh on 05 May 2020, where a Colonel, a Major and Jawans were wounded by similar action by the Chinese, adds to our concerns, as it surely would to all Indians and Government of India.

3. The incident at Galwan could only have happened because of failure at one or more levels in the political, civil and military establishments, especially in continuous intelligence acquisition and dissemination. While we accept that failures can happen in any system, in the current instance either our intelligence system was found wanting, or the intelligence which it obtained did not reach the field units in time. We therefore urge that our nation’s intelligence system be urgently revamped.

4. A formal statement issued by the Army or by Government soon after the unfortunate Galwan incident of 15/16 June, would have laid rumors and guesses at rest. It would have prevented China from taking advantage of contradictions between ambiguous or inaccurate verbal statements needing later clarifications. We therefore urge that in the event of such future situations, only formal statements be issued so that the Indian public is not confused and the aggressor nation does not gain political advantage.

6. A Fact-finding Body needs to be immediately instituted regarding the intrusions, incursions and encroachments by China in Aksai Chin (Depsang, Galwan, Pangong Tso, etc.) and also elsewhere on our long borders with China, up to Arunachal Pradesh in the East. We request that the Report of this Fact-finding Body be tabled in the Lok Sabha within a time-bound framework.

7. We also strongly urge that the un-redacted Henderson Brooks-Bhagat Report concerning the 1962 war against China be released into the public domain, so that the military-bureaucratic-political system and the public can learn from the mistakes of the past. There can be no sensible reason for this Report remaining secret even after 57 years.

8. We urge that government should take very early steps towards concluding Boundary Agreements with all our neighbours, but especially China and Pakistan, by employing all available diplomatic means and pressures, together with the power of India’s membership position for 2021-22 in the UN Security Council. This does not in any manner imply reduction in deployment of our Armed Forces or let-up in our intelligence systems, but it will enable us to better attend to development for our people within our country.

9. We further urge that in the domestic context, proactive steps be taken to use non-electoral political tools of consultation, discussion and negotiation in all domestic disputes and situations instead of coercion and force, as it will strengthen our nation’s integrity and resolve to face any and all aggressive designs by inimical and aggressive neighbours. These steps will enable state and central governments to devote more attention and resources towards development for our people within our country.

10. As military Veterans who have served our nation for decades, we would like to bring the following points to the attention of the President of India who is also the Supreme Commander of our Armed Forces, the Prime Minister of India, and the Armed Forces Leadership:

i) Over the decades, a substantial portion of the Army has been continuously deployed in its secondary role on internal security (IS) and Counter-insurgency (CI) duties, at the cost of availability of troops for the Army’s primary role of defence of territorial sovereignty. At the same time, large strength of the Central Armed Police Forces (CAPFs) are deployed in border areas in an essentially military role. This anomalous reversal of roles and duties now demands rationalization for efficiency and effectiveness in both internal and external national security.

ii) Dependence on foreign sources for critical hardware and critical software used in governance functions and the various sectors of our economy, especially the security forces (Armed Forces, Intelligence services, CAPFs and state police forces) makes India vulnerable to cyber-attack, which could be designed to hamper military operations. We urge that India needs to urgently invest in indigenous human, material and financial resources to manufacture its own hardware and software in adequate volumes, so as to avoid purchase from international vendors, especially for the command and control structure the Armed Forces and Intelligence services. We strongly urge that urgent steps need to be taken in this direction in the interest of national security.

iii) The Indian Armed Forces have been continuously deployed over decades for war/conflicts with neighbours and for internal security. Political solutions have not been sought in the past, but now need to be arrived at, because continuous deployment of the military can never be a long-term solution. We therefore urge non-military political solutions for both external and internal security, in the larger national interest.

11. We have one of the finest voluntary, disciplined, professional Armed Forces in the world. All personnel of India’s Armed Forces take an oath which is unique to the Armed Forces, namely, to defend our nation even at peril to their lives, in active military operations, in harsh and high-risk field service conditions. The June 15/16 incident in Galwan valley resulting in death of 20 of our best and bravest, is only the most recent example.

12. The Armed Forces of India take pride in their secular credentials, which are part of their ethos, training and operations, and on the basis of which every soldier fights and dies as an Indian, without regard to his religion, caste, creed, state of origin. We believe that only this secular basis will more firmly integrate our diverse nation, and strongly urge that divisions on the basis of religion, caste or creed should be discouraged as a matter of policy. We urge our political leadership to adhere unwaveringly to the vision and spirit of the Constitution of India, which spells out the framework for our nation and its people

13. As we have done during our active service in the past, we assure you of standing in solidarity with our nation, the Constitution of India, the Government of India and our gallant Armed Forces, in facing the present aggression by China on our borders, and of continuing to do so in any situation in the future..

We the undersigned, endorse the above Statement: