The relationship between intelligence agencies and Rajan has been public for a while now. So can they be held liable for his actions? 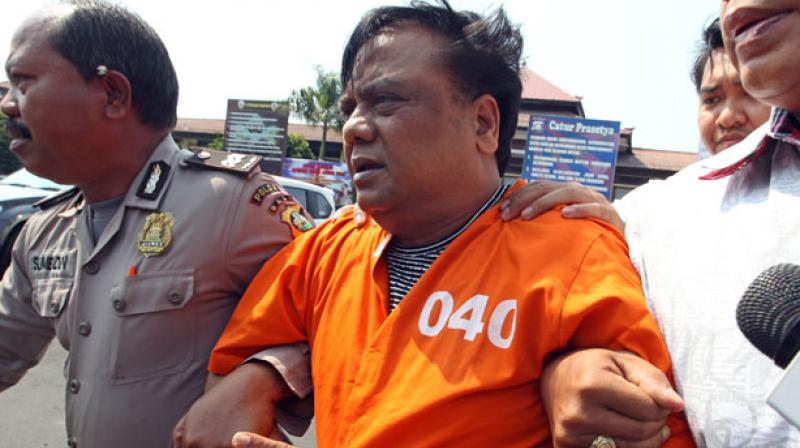 Now that gangster Chhota Rajan has been convicted and sentenced to life imprisonment on the charge of plotting the murder of journalist J. Dey, is it not time to worry about the civil liability of our intelligence agencies, who were closely aware of his criminal activities?

Their relationship has been subject to public attention since 1998, when ISI agent Mirza Dilshad Beg was eliminated. It became more pronounced after 2014, when open bragging on covert security activities became the “new normal” of the NDA government’s self-styled spokespersons. His flight from Bali in November 2015 in royal style in a special Gulfstream III and his special security with body doubles like the fabled protection for  Saddam Hussein, all at the taxpayers’ expense, gave us an impression that he was an important asset to some people. Although Rajan was wanted in about 75 serious cases, mostly in Maharashtra, he was not treated like an ordinary fugitive, but given VIP status.

Former Union home secretary R.K. Singh, then a BJP MP and now a minister of state, told India Today TV in an “exclusive interview” on August 25, 2015: “An operation to eliminate Dawood Ibrahim was being planned [in 2005], before it was blown up by actions of Mumbai cops. Ajit Doval was involved in the operation.”

The article gave details of the “secret” training given to Chhota Rajan’s shooters, Vicky Malhotra and Farid Tanasha. Singh was quoted revealing that they were given “fake travel documents” and tickets. The government wanted “full deniability” and hence did not send their commandos. The paper added: “The botched plan to eliminate underworld don Dawood Ibrahim in Dubai has been part of intelligence agency folklore for over a decade now, but before this no high ranking officer of the government has admitted to the existence of an assassination plot against Dawood.”

Singh alleged that Doval – who had already retired by then as director of the Intelligence Bureau – was surprised by a senior Mumbai police officer when he was apparently giving a final briefing to the “Rajan gang members” over the blueprint of the Grand Hyatt Hotel, Dubai where Dawood’s daughter’s reception was to take place on July 23, 2005. Although Doval “was forced to back off”, the Mumbai officer arrested Malhotra and Tanasha. The India Today TV report concludes: “When Doval was asked for his reaction, the super sleuth denied all knowledge and said that he had been watching TV at home at that time.”

The Mumbai police had acted because they were in search of Malhotra and Tanasha as absconding members of the Chhota Rajan extortion gang. Malhotra was wanted by the judge of the special court in MCOCA special case no. 25 of 2005, filed by the crime branch. They received information that the wanted persons were to arrive in Delhi on July 10, 2005. Accordingly, they were arrested from different places in Delhi and produced before the court. On October 26, 2010, Malhotra was convicted and sentenced to different terms under different counts. Tanasha, who was out on bail, was killed by rival gangsters in 2010.

The arrest of the duo was widely reported at the time but only Sachin Parashar of the Times of India had a key detail about the circumstances: the Chhota Rajan hitmen were picked up from Doval’s car and in his presence “The retired official initially took offence to the police posse from Mumbai intercepting his vehicle and insisted on ascertaining their identification. He, however, gave in after the group indeed turned out to be policemen and refused to let go of Malhotra, wanted in seven murder cases. The ex-IB chief made calls from his phone and was allowed to leave.”

The US embassy in Delhi detailed what was known about the incident at the time in a leaked cable to the State Department:

9. [T]he Indian media was rife with speculation about why the former head of India’s premier intelligence service was caught with a known underworld figure. As is often the case on media coverage of the underworld, Ibrahim was quickly assumed to have had a hand in the incident. Malhotra is the right hand man of gangster Chhota Rajan, a fierce rival of Ibrahim. Rajan was once Ibrahim’s lieutenant, but broke up with Ibrahim after the 1993 Mumbai bombings. The two have reportedly been fierce rivals since…  Rajan was thought to be living somewhere in Southeast Asia, but recent press reports claim that is now hiding in Europe. He and Malhotra are believed to have been responsible for the targeted killing of a number of Ibrahim’s associates…

10. The media originally speculated that the IB wanted to use Malhotra to target and kill Ibrahim if he traveled to Dubai to attend the reception. According to this theory, Doval acted as the conduit between the IB and Malhotra. The Mumbai police were either unaware that the IB was collaborating with Rajan, and surprised the IB operation with its own sting, or, plausibly, some even speculated that Ibrahim was aware of the IB/Rajan plot against him and had tipped off the Mumbai police, many of whom work directly or indirectly for him.

11. The GOI and the Mumbai police have not commented on the incident. The arrests and the presence of former IB chief Doval are established facts. Since the authorities are not publicly talking, everything else about the incident is [the] speculation of media outlets…

‘Speculation of media outlets’ is what it remained until 2015, when R.K. Singh’s interview provided as close to an official confirmation of events as one can hope to get about the murky affair. Admittedly, there is nothing improper about using gangsters as informers to collect information on bigger crime cartels or terrorist leaders. All over the world, intelligence and crime investigating agencies regularly do this. But these activities have to be kept secret. Had longstanding tradecraft been followed, this secret meeting in 2005 would not have come to light. There is no evidence as yet that Dawood has been able to penetrate our national intelligence agencies. So how was the information leaked?

An example from the US

Also, there is no special law protecting intelligence agencies in India from public litigation in case such secret operations are compromised. In contrast, some countries try to codify such risky operations, thereby affording protection to genuine operations for national security or crime detection. In the US, for example, the FBI and other law and order agencies work within the ‘Attorney General’s Guidelines’ established in 1978 on the ‘Role of Confidential Informants’ (CIs). In 2002, these were revised. These instructions do not apply to the CIA for foreign intelligence activities by informants working outside the country. The FBI has to monitor the productivity of CIs by “aggregating their statistical accomplishments”. They have to be kept under watch for a certain period and if confirmed, are “permitted” to commit crimes to help maintain their “cover” and access. However, this is closely monitored and recorded, so that risks posed by them to the public and government are minimised. The rules prescribe joint monitoring programmes by the FBI and Department of Justice to minimise risk and give legal protection to employees.

One of the glaring cases in which these guidelines were ignored was that of FBI CI James J. “Whitey” Bulger, who had topped the FBI’s ‘Ten Most Wanted’ fugitives list. His family was well connected. His brother, Billy Bulger, was the president of the Massachusetts Senate, like our upper houses of the state legislatures. He started his life as an FBI informant to report on the Italian Patriarca crime family of New England. The gang was named after Gaspare Patriarca, who was its boss during the 1950s. His nemesis was the late Robert Kennedy, who was then attorney general. Gaspare also came into disrepute when it was revealed in the 1970s that his gang was hired by the CIA to assassinate Cuban leader Fidel Castro. This was, however, not carried out. James Bulger, who was a petty criminal in that area, used to pay “tribute” money to Patriarca for staying in business.

However, Bulger took full advantage of his position as an FBI informer. His notorious ‘Winter Hill Gang’ terrorised the South Boston waterfront for almost 20 years from the 1970s to the 1990s. They engaged in extortion, “loan-sharking”, bookmaking, truck-jacking and arms trafficking. His downfall came in 1994, when a joint probe by the Drug Enforcement Administration (DEA), Massachusetts police and Boston police began. The FBI was deliberately kept out of the picture. But in the same year, an FBI officer alerted him about his impending arrest and he fled. Rewards were announced. During his 17-year flight from justice, the government raised the reward to $2 million. On June 22, 2011, he was found hiding in his girlfriend’s house in Santa Monica in California. She was sentenced to eight years for harbouring him. Surprisingly, the tip-off about his presence in Santa Monica came from Iceland.

On August 12, 2013, Bulger was convicted for 11 murders and racketeering. But what is of interest to us is the court verdict in 2012 on civil suits filed by the victims of Bulger’s crimes, on the ground that the US government was partly responsible for his crimes, since he was working for them. Like Chhota Rajan, Bulger faced 32 grave charges including 19 murders, extortion, drug distribution and money laundering.On January 21, 2012, the US Court of Appeals for the First Circuit upheld the financial awards prescribed by a lower court for the families of people killed by Bulger. The court held that the government was liable as Bulger and his crime associates “were informants for the FBI, which shielded them from prosecution during the period of their crimes”. The victims in three cases were awarded a total of $4 million. The court held that the FBI had shown “negligence of a wildly reckless flavour” in protecting them as they were federal informants.

On April 15, 2013, the FBI was asked to pay damages under the Federal Torts Claims Act (FTCA) by the US Court of Appeals for the First Circuit. The FTCA permits lawsuits for “personal injury or death caused by the negligent or wrongful act or omission of any employee of the government while acting within the scope of his office or employment… if a private person, would be liable to the claimant in accordance with the law of the place where the act or omission occurred”.

The NDA government should be equally worried about facing such suits from the Chhota Rajan gang’s victims.

Note: The article has been updated to clarify a reference to media reports of the 2005 arrest of two Chhota Rajan gunmen in Delhi. Though the arrest was indeed widely reported, the fact that they were picked up while in the presence of Ajit Doval, a former director of the IB at the time, was only covered by the Times of India.