The Two Accused in 26/11 Mumbai Attack Who Never Were

Faheem Ansar and Sabahuddin Ahmed were arrested for allegedly providing a base for the attackers. In spite of being acquitted in 2013, both continue to languish in prison.

Mumbai: On November 26, 2008, ten members of Lashkar-e-Tayyaba, an Islamic terrorist organisation based in Pakistan, carried out a series of 12 coordinated shooting and bombing attacks that lasted for four days across Mumbai. This attack left 166 – including civilians and police officers – dead and scores severely incapacitated. But beyond these ten terrorists and their victims, there were also two young Indian Muslims who were falsely charged and thrown before the judiciary and media as the “local faces” of one of the deadliest terror attacks in the country.

Faheem Ansari, a resident of Goregaon area in the western suburbs of Mumbai, and Sabahuddin Ahmed, from Bihar, were arrested for allegedly providing a base for the 26/11 attackers, including Ajmal Kasab. But by the time they were acquitted by the Supreme Court in August 2013, Ansari’s wife Yasmin says, the worst had already hit the family.

“My normal, healthy family life was shredded into pieces overnight. My child was rendered “fatherless”. From being a regular worker at his brother’s paper workshop, Faheem was tagged along with the most dreaded terrorists of Pakistan,” Yasmin recalls.

Faheem’s nightmare actually began in February 2008, ten months before the November 26 Mumbai attack. He, along with Ahmed and six others was picked up for his alleged role in another attack on the CRPF base in Uttar Pradesh’s Rampur which left eight people dead.

Yasmin claims that these charges were false as well. Ansari, after his brother’s business began slowing down, had decided to start his own. “We thought he could get fabrics from UP and sell it in Mumbai. I still remember he had left for UP with some money to set up his small business here. He never returned home,” she recalls.

While the trial in the Mumbai terror attack case has been disposed and Ansari and Ahmed have already been acquitted, the Rampur case is still pending. Yasmin says that in the past 11 years, several judges have changed in the Rampur case and the trial has almost been concluded; it is awaiting judgement. “Evidence has already been recorded, but the judge was transferred last year for the fifth or the sixth time, I don’t remember. And since then, Faheem and others are waiting for a new judge to be appointed so that a verdict is passed,” she told The Wire.

Faheem was booked in the Rampur firing case in February 2008 and Yasmin says the family was informed almost a month later. “We had no idea what was happening. We haven’t had any interaction with the police or lawyers before that point. By the time the family could muster the courage and raise funds to travel to UP, it was already four months”. Yasmin says in those eight months between February and November, she met her husband only once at the Bareilly prison and then directly when he was shown arrested in the Mumbai terror case.

According to the Mumbai police’s crime branch, which was desperate to show local links to the attack, Ansari and Ahmed had reconnoitred months in advance and had prepared maps that were handed over to each group of gunmen. These maps, according to the prosecution, had depicted the route from areas like Chhatrapati Shivaji Terminus to other locations like Malabar Hill in south Mumbai, where the state chief minister’s residence is located.

This claim was, however, rubbished by the sessions judge M.L. Tahiliyani, who had presided over the trial. The court observed that there was no need for the gunmen to rely on hand-drawn maps when there was far better technology available on the internet.

“On the contrary, almost all the pieces of evidence to connect the accused [Ansari] and [Ahmed] with the alleged offences are found to be doubtful and tainted…” These were some of the crucial observations made by the trial court while acquitting the duo. These observations were later upheld, both in the high court and the Supreme Court when the state appealed against the acquittal.

The acquittal, however, Yasmin says, means nothing to her family. As soon as he was given a clean chit by the Supreme Court, Ansari was moved back to UP in 2013. And since then, the couple has managed to meet only two or three times. “We have no one there [In UP]. Travelling to UP means raising funds for travel and also our stay there. It gets cumbersome”.

So now, the couple stays in touch with each other through letters. “He would write letter after letter to me describing his life inside the prison. Those letters which have messages for the family, about how he missed us and how he would feel desperate to be released from prison. Those letters would just break my heart each time”. One of the letters written by Faheem Ansari to his wife Yasmin from Bareilly prison. Credit: Sukanya Shantha

She adds, the frequency of Ansari’s letters has slowly reduced and now he sticks to information pertaining to just his trial. “Now he only writes to me about the case and what he expects of the lawyers. Nothing more. Maybe this prolonged stay in the prison has taken a toll on him emotionally,” she wonders, sitting at her residence in Mumbra, in the suburbs of Thane district, 30 kms from Mumbai.

Yasmin says at least Faheem has his family to worry for him and provide him emotional support, but in Ahmed’s case, no one from his family came forward. “Maybe they were too scared. We have not heard [from] of any of his family members or relatives in the past 11 years. We first got to know that someone called Sabahuddin from Bihar was also arrested along with Faheem in the Mumbai and Rampur cases. We know nothing more about him”.

Hemant Karkare had given Faheem a ‘clean chit’

Like in the Mumbai case, she claims, in the Rampur case too, her husband would have received a clean-chit if the then ATS chief Hemant Karkare was alive. Soon after the arrest, Karkare had asked his officers to look into Ansari’s criminal antecedents in the state. He had concluded Ansari had no role in any criminal activities in the state and had indicated that his UP arrest could be baseless too.

“But before we could find a way to take Kakare sahab’s help, he got killed in the Mumbai terror attack,” Yasmin claims. Karkare was the chief of Mumbai’s Anti-Terrorist Squad and was killed in action during the 2008 Mumbai attacks. He was handling some high-profile cases like the Malegaon blasts of 2006 and 2008 at the time of his death. Karkare’s presence, she says, would have also ensured that Faheem and Sabahuddin would not have had to endure false charges in the Mumbai terror attack.

Also read: 26/11 and the Media: Where Were the Protocols?

The arrest changed it all

Ansari’s family, which had once lived in Mumbai’s suburbs, had to move into a smaller house in a Muslim locality in Mumbra post his arrest. “Faheem’s arrest had a direct impact on the family business. He was handling their paper bag-making business. Once he got arrested, and I and his brothers began chasing lawyers and shuttling between UP and Mumbai, the business took a beating. It was eventually shut down”. 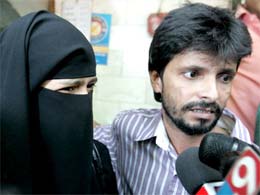 In Faheem’s absence, Yasmin, who had studied until Class 10, took up tailoring. “I, along with my sister-in-law have been carrying out the tailoring work. It is enough to take care of me and my daughter,” she says.

Their daughter Iqra was only five at the time of the first arrest. Yasmin says Iqra has no happy memory of her childhood. “She only remembers seeing her father in jail on one or two occasions. I wish we would soon start afresh and Iqra has better memories to hold on to,” says Yasmin.

Iqra is now in Class 11 and is studying in a college in Mumbai. The mother-daughter duo shifted to Mumbai – closer to her college – a few months ago. “I wanted to ensure my daughter feels safe and has a conducive environment to study. I could not provide her anything else. I wanted to ensure at least her education isn’t compromised”.