The iconic hotel in Colaba area was among the targets of Pakistani terrorists during the 26/11 Mumbai terror attack. 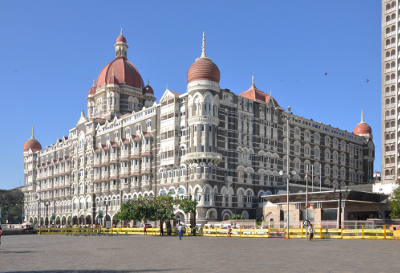 Mumbai:  Police on Tuesday beefed up the security outside the Taj hotel in south Mumbai after a threat call, a senior official said.

The iconic hotel in Colaba area was among the targets of Pakistani terrorists during the 26/11 Mumbai terror attack.

The phone call was received at 12.30 am on Tuesday and the caller, who claimed he was from Karachi in Pakistan, said the hotel will be attacked, the official said.

Immediately after receiving the call, the hotel management informed police, following which security of he hotel has been stepped up, the official said.

Adequate police deployment has been made in the area around the hotel and entry and exit restricted on the roads leading to the hotel, he said.

The official told PTI that Mumbai police are on high alert after Monday’s Karachi exchange terror attack and as part of the enhanced anti-terror measures, security outside the hotel and other vital installations has been increased.

“Police are on alert and an adequate number of police personnel have been deployed in the (Taj hotel) area,” the official said.