Srinagar: The spate of targeted killings in Kashmir continued on Thursday, with two more from civilians the minority community, including a female principal, being shot dead on the premises of a school on the outskirts of Srinagar, officials said.

The deceased have been identified as Supinder Kour, a Sikh who worked as the principal of the school in downtown Srinagar where the incident took place, and Deepak Chand, a Kashmiri Pandit who was a teacher there.

The shooting took place around 11 am, according to a member of the staff who could not be identified immediately. Witnesses said three armed assailants arrived at the school and asked the staff milling around in the corridor to move inside the principal’s room.

“First they demanded to know our identities. Then the Muslim staff was asked to go out of the room while they spoke with the two victims. We don’t know what they talked about,” the witness said, wishing to remain anonymous.

“The assailants then got them out of the room and shot them mercilessly,” he added.

A staffer who spoke with reporters outside the school premises said the two victims were seated on chairs in the main compound of the school while some teachers were sipping tea in a room when the sound of gunshots rattled the air.

“We were shocked. We could not come out of the room,” he said.

“It was only when the shooting subsided and people living in the neighbourhood gathered in the school compound that I came out to see the two bodies lying in a pool of blood,” he added.

Manzoor Ahmad, a farmer who lives in the neighbourhood, told The Wire that he was on way to milk his cows at a farm in Sangam area of Eidgah when he heard the gunshots.

“There was a buildup of security forces and soon a search operation was started. I was stuck for hours because my farm is situated on the other side of the school,” Manzoor said.

He said there are rumours that the attackers “escaped from the area on motorbikes”. The Wire could not independently verify his claim. Hajra Begum, another resident of Eidgah, said she was taking vegetables from a garden in their paddy field located in the proximity of the school when she heard the sound of gunshots.

“I thought the sound was created by a short-circuit in high tension wires. But when I heard about the killings of two teachers, I felt sad and numb,” she said.

“The staff is in fear and shock. Their colleagues have been targeted,” J&K’s Director General of Police, Dilbag Singh, told reporters outside the school after a brief meeting with its administration.

“These innocent civilian killings are a conspiracy to create terror and drive a communal rift in Kashmir, but we won’t allow it to succeed. We have got good leads in the previous incidents,” he added, requesting people not fall for the conspiracy.

As the news of the two killings spread, hundreds of Sikhs and Muslims gathered at the principal’s house in Alochi Bagh of Srinagar.

Ravinder Singh, who lives in Alochi Bagh, said the incident has triggered a sense of fear in the community. “It has become difficult to live here. What was her fault? We need assurances from the majority community,” he said in a broken voice.

“If terrorists had any religion, they would have paused before killing a woman. It is an act of cowardice. We condemn it and the majority community should also come forward so that such acts are not repeated and our brotherhood is preserved,” said Baldev Singh, also a resident of Alochi Bagh.

DGP Dilbag Singh said the ‘Resistance Front’ was responsible for the killings. The front was founded by Abbas Sheikh, a recycled militant from Kashmir militancy’s old guard who was gunned down earlier this year by security forces.

The outfit drew its initial cadre from existing groups such as Hizbul Mujahideen and Lashkar-e-Tayyabba but Abbas is believed to have recruited some youngsters into the outfit, including from the capital Srinagar, before his death.

“TRF is run from Karachi. We will soon expose this nexus from across (the border). The victims were not affiliated with any group. It’s a malicious propaganda by TRF that Bindroo [a chemist killed on Tuesday] was working with the RSS,” Dilbag told NDTV.

The shocking killings came barely 36 hours after three civilians, including a prominent Kashmiri Pandit chemist, Makhan Lal Bindroo, and a street vendor from Bihar, were gunned down in Srinagar on Tuesday evening. 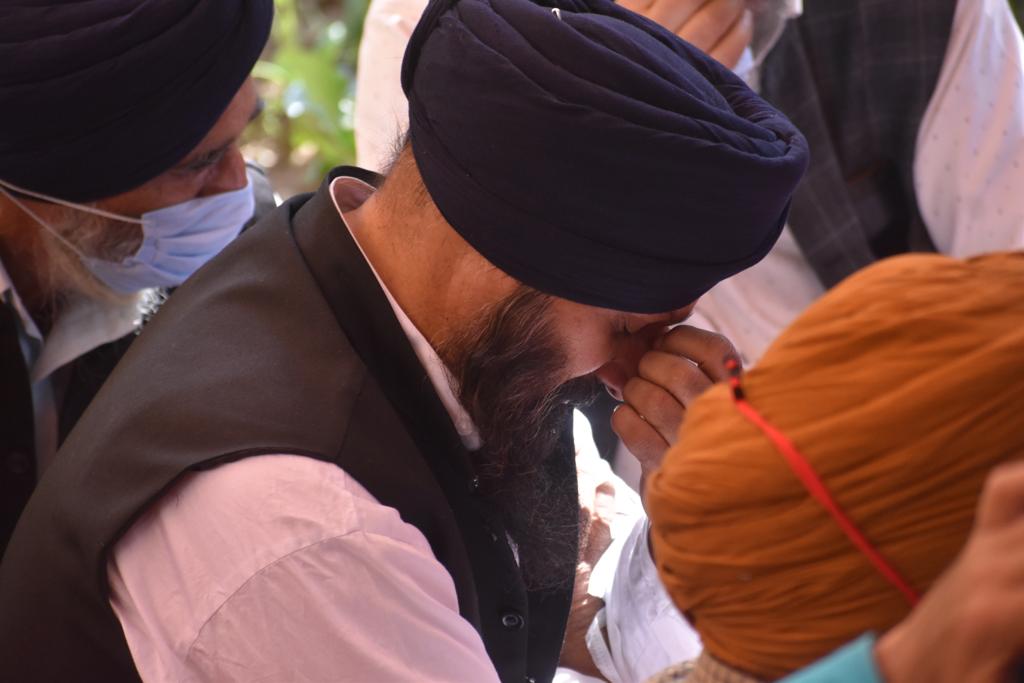 The TRF had claimed the attack on Bindroo while the Bihari vendor’s killing was owned by the ISIS, which also released a 16-second video of the attack through its official new agency Amaq.

The killings of the two teachers evoked massive outrage across the region, with several prominent Kashmiri Pandits questioning the BJP’s claims that normalcy had returned to Kashmir.

People’s Democratic Party chief and former J&K chief minister Mehbooba Mufti targeted the Union government for the deteriorating security situation in the Valley. ”Disturbing to see the deteriorating situation in Kashmir where a minuscule minority is the latest target. GOI’s claims of building a Naya Kashmir has actually turned it into a hellhole. It’s sole interest is to use Kashmir as a milch cow for its electoral interests,” she tweeted.

US-based author Vivan Marwaha also held the Union government responsible for the deterioration in Kashmir’s security climate. “The murder of Kashmiri Pandits and other minorities in Kashmir is absolutely sick and deplorable. The Central government needs to explain how this is happening under its watch,” he tweeted.

“Shocking news coming in again from Srinagar. Another set of targeted killings, this time of two teachers in a Govt school in Idgah area of the city. Words of condemnation are not enough for this inhuman act of terror but I pray for the souls of the deceased to rest in peace,” former chief minister and National Conference leader Omar Abdullah tweeted.

“Another Kashmiri Pandit and a Kashmiri Sikh killed within two days after the killing of a popular Kashmiri Pandit chemist. I am shivering think of all this. Is 90s being repeated? Where is Mr. Modi? Is this how we will return to our homeland? Where we are not safe,” Sagrika Kissu, a Kashmiri Pandit journalist, wrote.

A spate of targeted killings this year has rattled security agencies in Kashmir but the latest attacks seem to be aimed at creating a sense of shock and fear in the minority community at a time when the Union government is pushing for the return of Kashmiri Pandits to the Valley.

The J&K Police have described the targeted killings as ‘hybrid warfare’, a new tactic adopted by militants who, according to the police, are training and arming their overground workers with small firearms to kill ‘soft targets’.

According to officials, these ‘soft targets’ may include an off-duty police official visiting home to spend time with his family or a civilian who is dubbed by militants as a “collaborator” of the government agencies.

Official data reveals that 25 civilians have been shot dead by militants in targeted killings this year. While four are Kashmiri Pandits, three were non-locals from other Indian states, and 18 are Muslims.