Rambagh Encounter: After Years of Relative Calm, Militancy in Srinagar on the Rise Again

Local politicians say the encounter – the eighth in Srinagar this year – belies the Modi government's claim that ending Article 370 would lead to an improvement in the security situation. 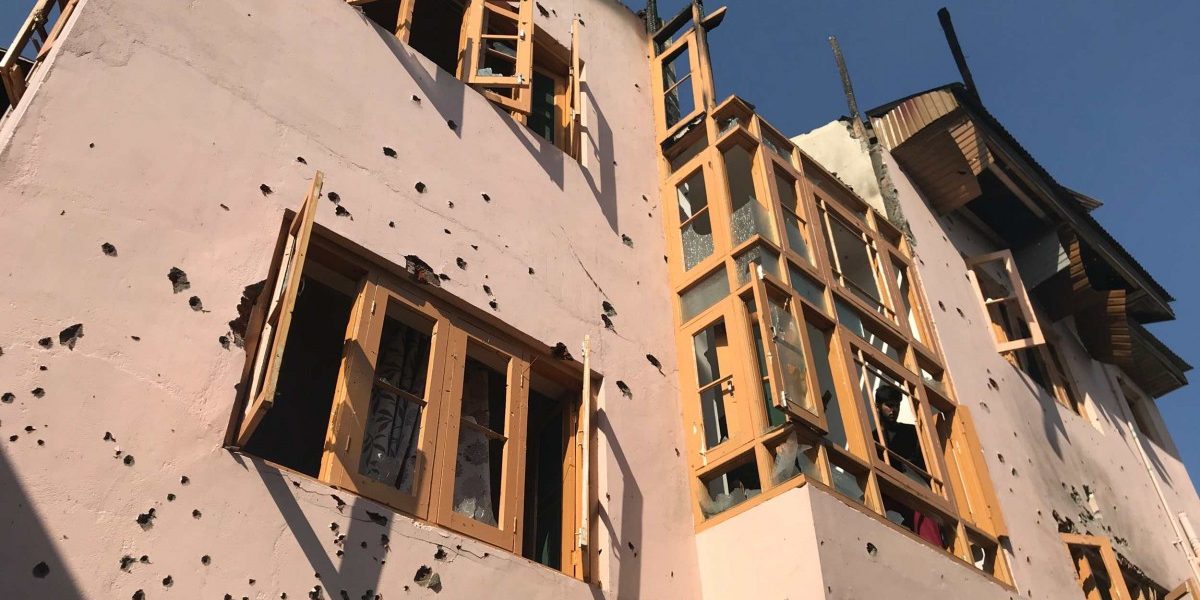 The building in Rambagh, Srinagar where the encounter took place. Photo: Shakir Mir

Srinagar: The police and security forces killed two militants during a big gun battle in the heart of Srinagar on Monday – the eighth encounter of 2020 in a city where the footprints of militancy had almost vanished some years ago. The fierce gun battle was immediately followed by stone-pelting protests in the area. The frequency of encounters in Jammu and Kashmir’s summer capital have led political observers to ask if the avowed objective of scrapping Article 370 has indeed been met.

The residents of the Rambagh area – which is just minutes away from the Srinagar district police headquarters – said that they heard loud bangs at 7 am. “We first heard four big shots,” said Balbir Singh, a local. “Then there was intermittent firing.”

According to the police statement, the CRPF and J&K police led a joint effort after getting a tip-off about the presence of militants. “During the search operation, as the presence of terrorists got ascertained they were given opportunity to surrender after evacuating all civilians. However they fired indiscriminately upon the joint search party which was retaliated leading to an encounter.”

Police have identified the slain militants as Saifullah, a top commander of the terrorist outfit Lashkar-e-Tayyaba, and Irshad Ahmed Dar, a local youth from Pulwama. According to the police, Saifullah, a Pakistani national, had infiltrated into Kashmir earlier this year. “He was involved in planning and executing several major terror attacks on security forces which includes killing of a CRPF officer at Chadoora on 24/09/2020 and 02 CRPF personnel at Kandizal area of Pampore on 05/10/2020. He was also part of the group involved in killing of two police personnel at Nowgam Srinagar on 14/08/2020. Besides, he was also involved in firing on convoy on 21/09/2020 in Nowgam area,” the statement read.

The encounter took place inside a congested locality on the banks of a flood control channel. Huge flames leapt from the building where militants were said to have been hiding, sending a plume of white smoke in the air.  The structure was perforated with bullet marks. The use of heavy explosives knocked down the roof and walls surrounding the compound. Residents alleged that heavy ammunition was used due to which many houses in the neighbourhood trembled. “We almost thought our house will collapse,” said Haseena, a neighbour. “We asked the forces if we must leave the premises. They insisted that we stay inside.”

Immediately after the gun battle ended, scores of protesters entered the area and shouted pro-azadi slogans.

Also read: How to Love Militantly – or How to Make Gulkand

Residents told The Wire that the house was owned by one of their neighbours, who had rented out the accommodation to students coming from different parts of Kashmir who were enrolled in various tuition centres in the city.

“Except for this particular building, all surrounding houses belong to us or our relatives,” said Irshad Ahmad, a neighbour. “We were woken up by troops at 4 am in morning and told to vacate the premises.”

Residents also alleged that the security forces thrashed a local youth. “They dragged my nephew Shahid Zargar out and asked him to open and gate and take the first step in so that the forces would follow,” said Mehrajuddin Zargar, a resident. “My nephew is a student. He is only 24 years old. He has been beaten severely and we have shifted him to a different place for the moment.”

Residents also said that at least 20-30 students were living in the building.

The Rambagh encounter is the eighth such exchange of gunfire to take place in the precincts of Srinagar city, where militancy had been waning considerably until a few years ago. The big gunfights made a comeback in Srinagar in October 2018 when the security forces killed Mehraj Bangroo, a high-profile LeT commander. Since then, encounters have been frequently reported within the city jurisdiction. But this is the first time in many years that eight big encounters have taken place in the city in less than a year. 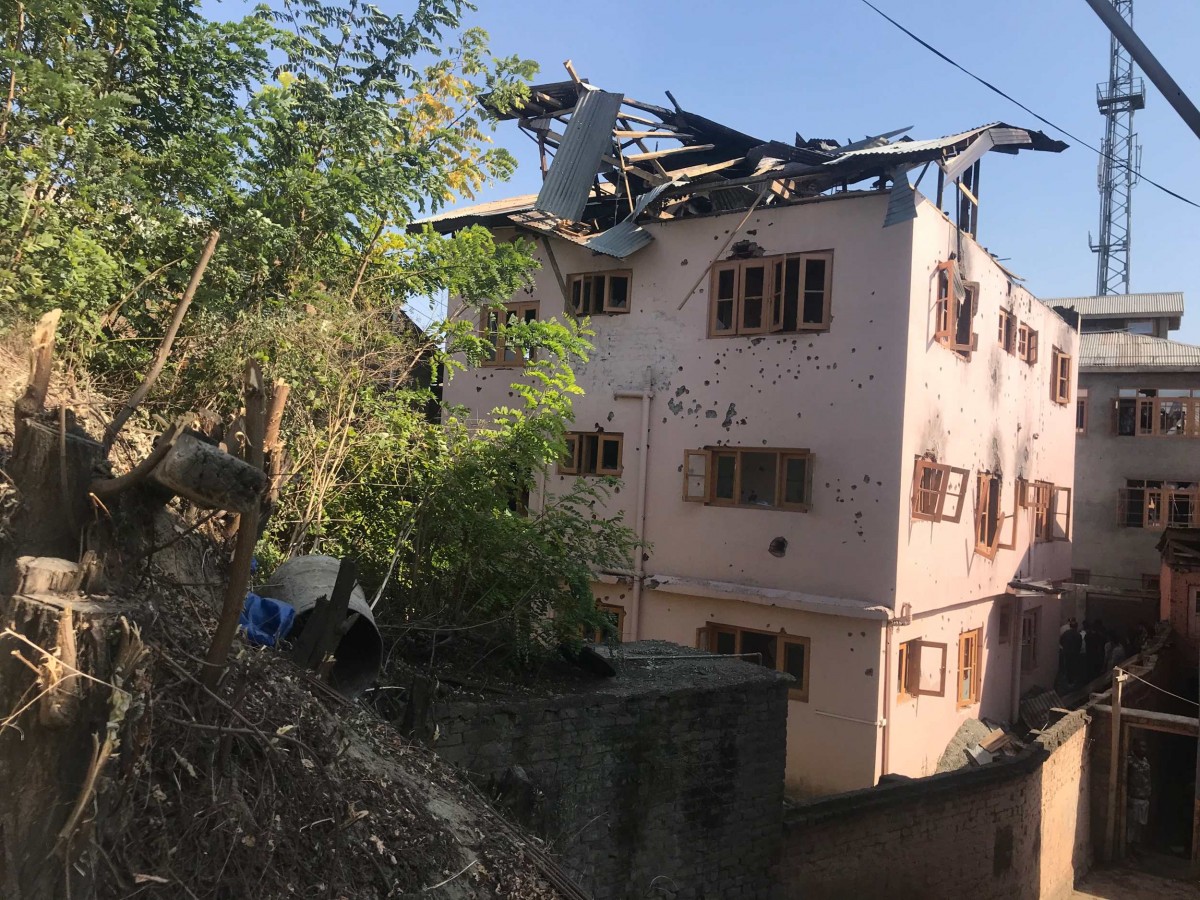 The building in Rambagh, Srinagar where the encounter took place. Photo: Shakir Mir

In February this year, two militants and a CRPF jawan died during a gun battle at Lawaypora near the outskirts of Srinagar city. In May, a 12-hour-long encounter took place in the Nawa Kadal area in which two militants died. The gunfire destroyed over a dozen structures, sparking violent protests leading to several injuries.

On June 21, forces killed three militants belonging to the Islamic State’s Wilayat-e-Hind faction during a gun battle in the Zadibal area of Srinagar. In July, Zahid Ahmad Dass from the same outfit was killed during a shootout at Srinagar’s Mallabagh area.

On July 25, two militants associated with LeT were killed during a gunfight at Panzinara on the outskirts of Srinagar city. On August 30, three militants and an assistant sub-inspector of the J&K police, Babu Ram, were killed in an encounter in the Pantha Chowk area on the outskirts of Srinagar city. Last month, an encounter took place in the Batamaloo area where the security forces allegedly shot dead a civilian named Kounsar Riyaz Sofi, besides killing three militants

Political parties in Kashmir have raised questions over the frequent gun-battles in the city area. “The Modi government has lied to the whole nation when it said dissolution of J&K’s special status will end militancy,” said Waheed ur Rehman, spokesperson, People’s Democratic Party. “There is more fear and anger today than there was at any time in the past. This resentment will create more violence. Just look around, the city looks completely militarised. They are investing in optics and generating the discourse of normalcy but the reality is totally opposite. We are back to the 1990s.”

Kashmiri politicians say that the Rambagh encounter points to the deteriorating security situation in the Valley. “We had already anticipated this intensification of violence and warned the Central government about it,” said Hasnain Masoodi, a Lok Sabha member associated with the National Conference and a former J&K high court judge. “The site is not very far away from the civil Secretariat, high court and district police lines. What does it indicate? The Central government has created the kind of resentment never seen before. Just recently, a survey indicated that over 90% of Kashmiri youth disapproved of the August 5, 2019 move. Clearly such resentment is manifesting in the form of frequent gun battles, that too at such sensitive locations in the city. The calm in Kashmir is deceptive.”

This year so far, 75 anti-militancy operations have been carried out in which 180 militants have been killed, the police said during a press briefing on Monday. They added that only one militant was active in Srinagar. “We will bring him to justice soon,” DG J&K police told media. He also claimed that the J&K police was successful in dissuading at least 26 youths from joining militancy in 2020.

Previously, the J&K police has claimed that Srinagar cannot be declared militancy free. “Time and again I have been saying that any district where an encounter does not take place does not mean militants are not present there. The militants keep on changing their shelter and hideouts. We keep on generating information and neutralise them accordingly,” Kashmir’s inspector general of police, Vijay Kumar said earlier this year. “Srinagar is such a city where militants keep on coming for medical treatment, raising funds, meeting etc. Srinagar cannot be called militancy-free.”

Note: In an earlier version of this story, Irshad Ahmad was incorrectly quoted as saying he had been trapped inside his house during the encounter.