The ambush coincided with the killing of two suspected Lashkar-e-Toiba militants, including a Pakistani, in an encounter in another part of the city. The police vehicle that was fired at near Zewan in Pantha Chowk area of Srinagar, killing 2 policemen and injuring 12. Photo: Faizan Mir

Srinagar: A police bus was ambushed by militants on the outskirts of Srinagar on the evening of Monday, December 13, killing three policemen, including an assistant sub-inspector, while at least 11 more policemen suffered injuries.

In a late night statement on Monday, the J&K police claimed that Kashmir Tigers, an offshoot of Pakistan-based outfit Jaish-e-Mohammad, was involved in the attack. One of the attackers was injured in retaliatory firing, police said.

The deadly ambush, which coincided with the 20th anniversary of the parliament attack in 2001, took place hours after two suspected Lashkar-e-Toiba militants, including a Pakistani, were gunned down in an encounter in another part of the city, underscoring further deterioration of the security situation in Kashmir.

Police sources said the bus carrying around two dozen personnel of the 9th battalion of reserve police forces came under attack in Zewan area of Pampora, some 14 km from the city’s commercial centre Lal Chowk, at around 6:15 pm on Monday, December 13.

“Terrorists fired upon a police vehicle near Zewan in Pantha Chowk area of #Srinagar. 14 personnel #injured in the attack. All the injured personnel evacuated to hospital. Area cordoned off. Further details shall follow,” Kashmir Police zone said in a tweet.

Another tweet noted that two policemen had succumbed to their injuries. The third policeman succumbed on Tuesday morning.

“#Terrorists fired upon a police vehicle near Zewan in Pantha Chowk area of #Srinagar. 14 personnel #injured in the attack. All the injured personnel evacuated to hospital. Area cordoned off. Further details shall follow,” another tweeted said.

A senior police officer identified the deceased as Assistant Sub-Inspector Ghulam Hassan, a resident of Jammu’s Ramban district, staff grade constable Shafique Ali, who hailed from Reasi district and Rameez Ahmad, a resident of Ganderbal in central Kashmir who succumbed on Tuesday morning. 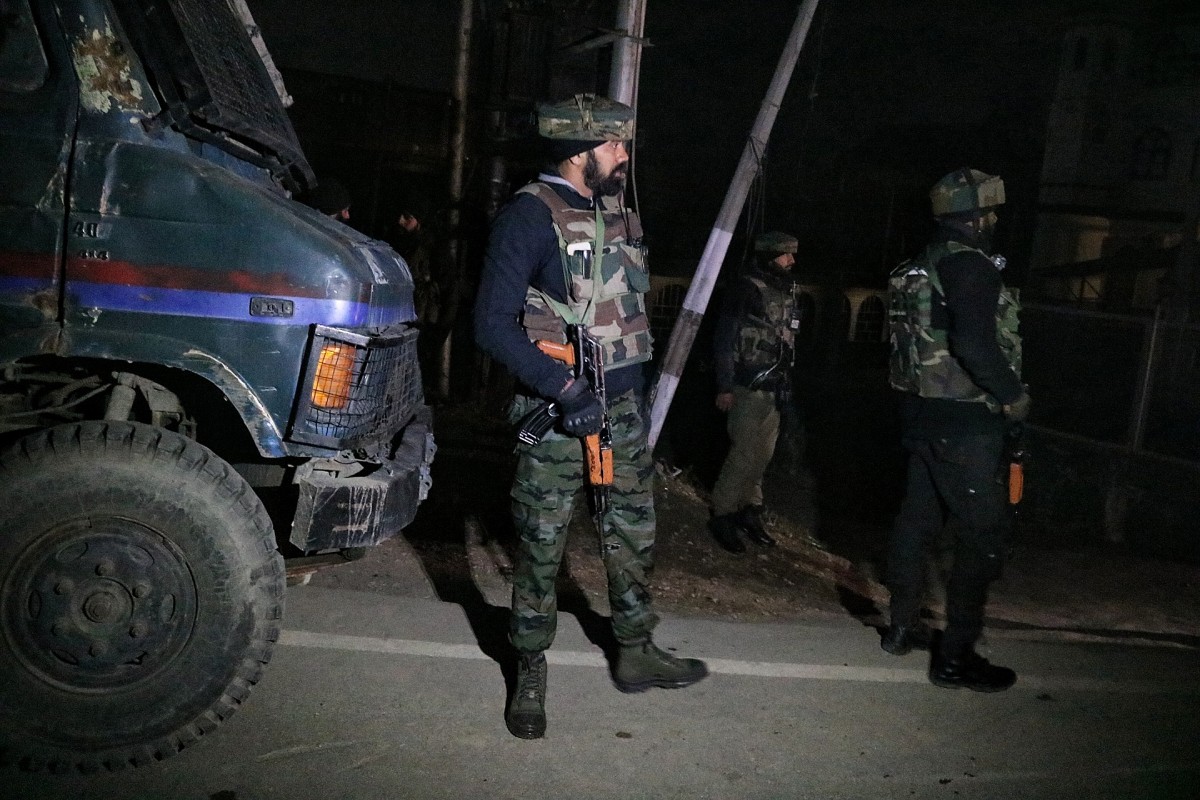 Security forces at the site where the police vehicle was fired at near Zewan in Pantha Chowk area of Srinagar, killing 2 policemen and injuring 12. Photo: Faizan Mir

A grainy video purportedly shot moments after the attack shows a group of injured policemen writhing in pain while some locals appear to urge others to call the ambulance or police station for help. “Where have you been shot? Is it the arm? You will be alright, God willing,” one unidentified local is heard telling an injured policeman. The Wire could not independently verify the authenticity of the video.

Police said the number of gunmen involved in the attack was not clear. However, sources said “more than one” assailants were involved who fired at the bus from “multiple sides”, leading to high number of casualties. A photo of the targeted vehicle shows the missing front windshield with visible bullet marks on the body of the vehicle.

Soon after the attack, additional security forces rushed to the spot and launched searches which were going on at the time when this report was filed. However, the perpetrators had managed to escape from the area under the cover of darkness. 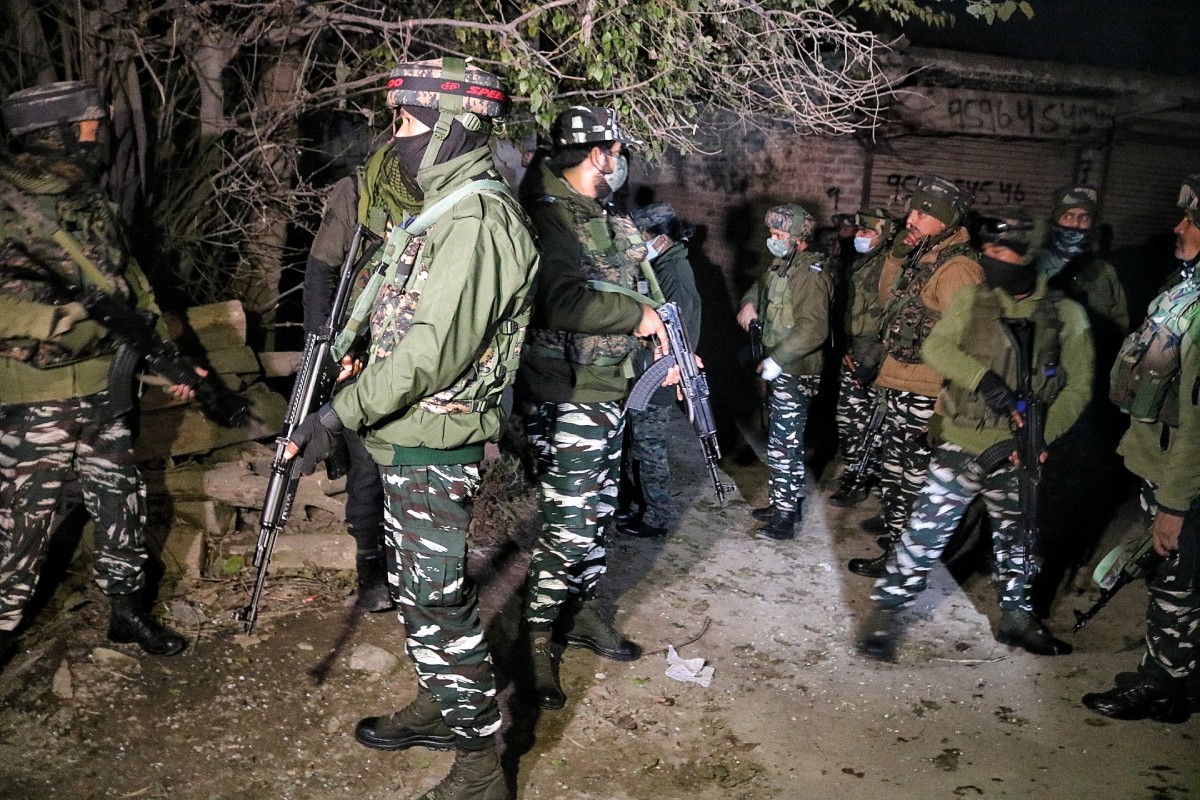 Security forces at the site where the police vehicle was fired at near Zewan in Pantha Chowk area of Srinagar, killing 2 policemen and injuring 12. Photo: Faizan Mir

The attack took place barely 10 hours after two militants were gunned down in Rangreth area near Srinagar airport on Monday morning. In a statement, police said the militants killed in a “chance encounter” included Aadil Ahmad Wani, a resident of Daramdoora village of Shopian, and a foreigner.

“Adil is a Pakistan-trained, ‘A’ category terrorist while the other individual who was killed, as per credible sources, is a foreign terrorist. Details are being further ascertained,” a police spokesman said.

The encounter sparked protests in Rangreth area with agitated youngsters pelting stones at security forces who were withdrawing from the area after the gun battle ended. A spontaneous shutdown was also observed in the area with locals contesting the police claims about the encounter.

A renewed wave of violence has left 40 civilians and 35 Army, J&K Police and paramilitary personnel dead in the Union Territory till November 15 this year. While police claims there are fewer than 200 active militants in Kashmir, militancy has turned more fatal this year.

On Friday, two policemen were killed in a surprise militant attack in north Kashmir’s Bandipora district. The attacker, whom J&K Police identified as a Pakistani militant, was caught on camera after he had shot the cops. Police said a second suspect provided logistical support to the Pakistani militant who had tried to snatch the rifles of the slain policemen but timely action by forces compelled him to escape.

A series of targeted attacks on security personnel and civilians at the onset of autumn this year evoked outrage across the country. October witnessed the worst violence since the Union government read down the special status of Jammu and Kashmir and downgraded the status of the erstwhile state into two Union Territories.

Many of the slain security personnel were killed in shoot-and-scoot attacks involving hybrid militants. This is a relatively new phenomenon in the three-decade-old Kashmir insurgency that took even the security establishment by surprise.

The latest attack in Srinagar evoked condemnation from the political parties with Prime Minister Narendra Modi seeking details of the attack from the Jammu and Kashmir administration headed by LG Manoj Sinha, who also took to Twitter.

PM @narendramodi has sought details on the terror attack in Jammu and Kashmir. He has also expressed condolences to the families of those security personnel who have been martyred in the attack.

Directed the concerned authorities to provide best possible treatment to the injured. I pray for their speedy recovery. Our police and security forces are determined to neutralize the evil forces of terrorism.

Congress leaders Rahul and Priyanka Gandhi paid tributes to the policemen who were killed in the attack.

Terribly sad to hear about the Srinagar attack in which two policemen were killed. GOIs false narrative of normalcy in Kashmir stands exposed yet there has been no course correction. My condolences to the bereaved families.

Terrible news of a terror attack on a police bus on the outskirts of Srinagar. I unequivocally condemn this attack while at the same time send my heartfelt condolences to the families of the deceased & prayers for the injured.