The People’s Alliance for Gupkar Declaration said that the life imprisonment served to the to JKLF chief was “unfortunate and a setback to the efforts for peace”. 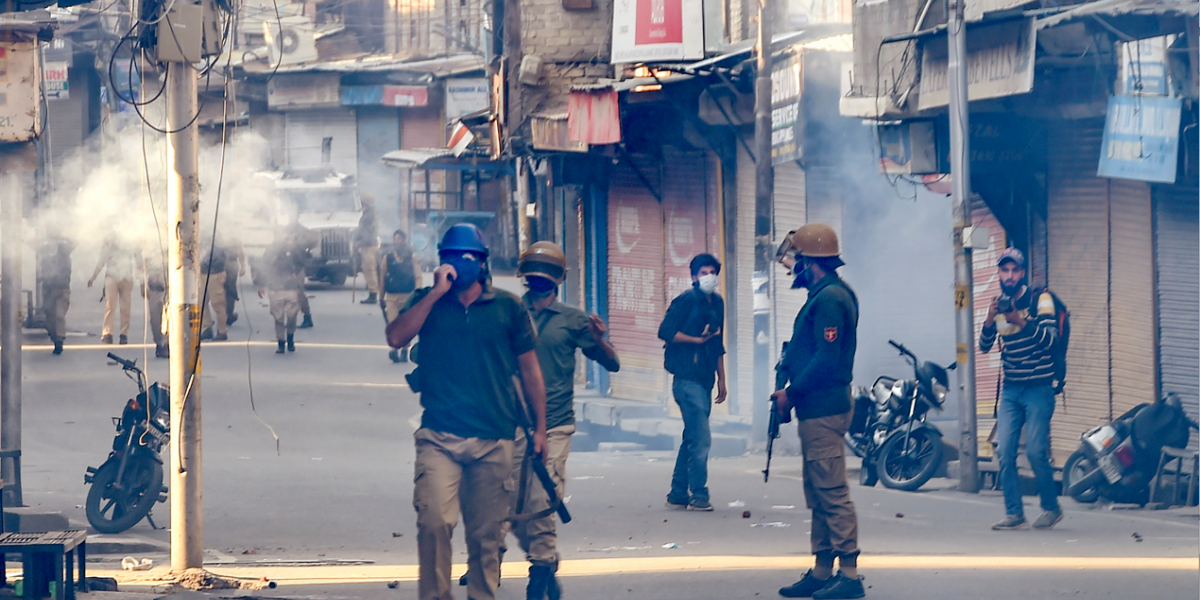 Srinagar: Security personnel chase away protesters during a protest, ahead of JKLF chief Mohammad Yasin Maliks sentencing in a terror case by a special NIA court in Delhi, at Maisuma in Srinagar, Wednesday, May 25, 2022. A special National Investigation Agency (NIA) court sentenced Malik to life imprisonment in a terror funding case. Photo: PTI

Srinagar: Clashes broke out between protesters and security forces in Srinagar on Wednesday, May 25 after a National Investigations Agency (NIA) court in New Delhi sentenced convicted Kashmiri separatist leader Yasin Malik to life in a terror funding case.

The NIA had sought the death penalty for Malik, who had earlier pleaded guilty of all charges, including those under the Unlawful Activities (Prevention) Act (UAPA).

Scores of protesters, including young boys and women, reportedly pelted stones at security forces in the Maisuma locality of Srinagar, the native of Malik, after the court sentenced him to life imprisonment.

Ahead of the court’s verdict, the Jammu and Kashmir Police had stepped up security deployment in downtown areas of Srinagar, and in Maisuma in Lal Chowk, where all the shops were shut. Apart from that, drones were also seen hovering over Maisuma to keep an eye on large congregations.

The sentence was delivered by special NIA Judge, Praveen Singh.

While awaiting the court’s verdict, Malik’s sister, Abida Malik, appeared on one of the windows of their residence in Maisuma. She was seen reading the Holy Quran. Later, dozens of women, led by Malik’s relatives, reportedly gathered at their residence and shouted pro-freedom, pro-Islam and pro-Malik slogans.

As the sloganeering grew louder, many youngsters assembled outside Malik’s residence, and the protest gathered steam. “How many Maliks will you kill? A Malik will emerge from every house,” they chanted while marching towards Lal Chowk. On the way, they were also joined by women protesters.

Security forces, however, fired teargas shells to push them back. In response, the protesters pelted stones at them. Clashes between protesters and security forces continued for around an hour before they were pushed back. There were no reports of any injury on either side.

Meanwhile, mobile internet services have been suspended in Srinagar and some other parts of Kashmir, although no official order has been issued in this regard.

The People’s Alliance for Gupkar Declaration (PAGD) – an amalgam of Kashmir-based mainstream parties who are fighting against the reading down of Article 370 – said that the life imprisonment served to the to Jammu and Kashmir Liberation Front (JKLF) chief was “unfortunate and a setback to the efforts for peace”.

“The triumphalism being displayed by the BJP [Bharatiya Janata Party] and the corporate media is bound to prove counterproductive. The NIA court has delivered its verdict but not justice. We are afraid that this will further compound the uncertainties in the region and will only fuel more alienation and separatist feelings,” a PAGD statement said.

“We suggest that Yasin Malik should avail all legal opportunities to contest this verdict,” the statement added.

“It is high time that it is recognised that terror funding is one of the gravest offences and has to be punished more severely,” Special Judge Parveen Singh said, Reuters reported.

When the court asked Malik about the death penalty being sought by the NIA in the case against him, he reportedly said that he has “not come to beg [for lenience]”. He also asked the court that if there were serious charges against him of conspiring with Pakistan to work against India, why wasn’t he arrested over these years, a Delhi-based TV channel reported.

Also read: J&K: PAGD Releases ‘White Paper’ on the Many Wrongs in Reading Down Article 370

The court also asked him what should be the quantum of his sentence, the channel reported.

“If seeking Azadi (freedom) is a crime, then I am ready to accept this crime and its consequences,” Malik told the court.

The JKLF chief had on May 10 told the court that he was not contesting the charges levelled against him.

The court had on May 19 convicted him in a terror funding case under Sections 120-B (punishment for criminal conspiracy), 121 (waging war against the government of India), 121-A (conspiracy to commit offences punishable by section 121) of the Indian Penal and several sections of the UAPA.