The militants fired indiscriminately on a police party near Nowgam bypass on Friday morning, a police official said. 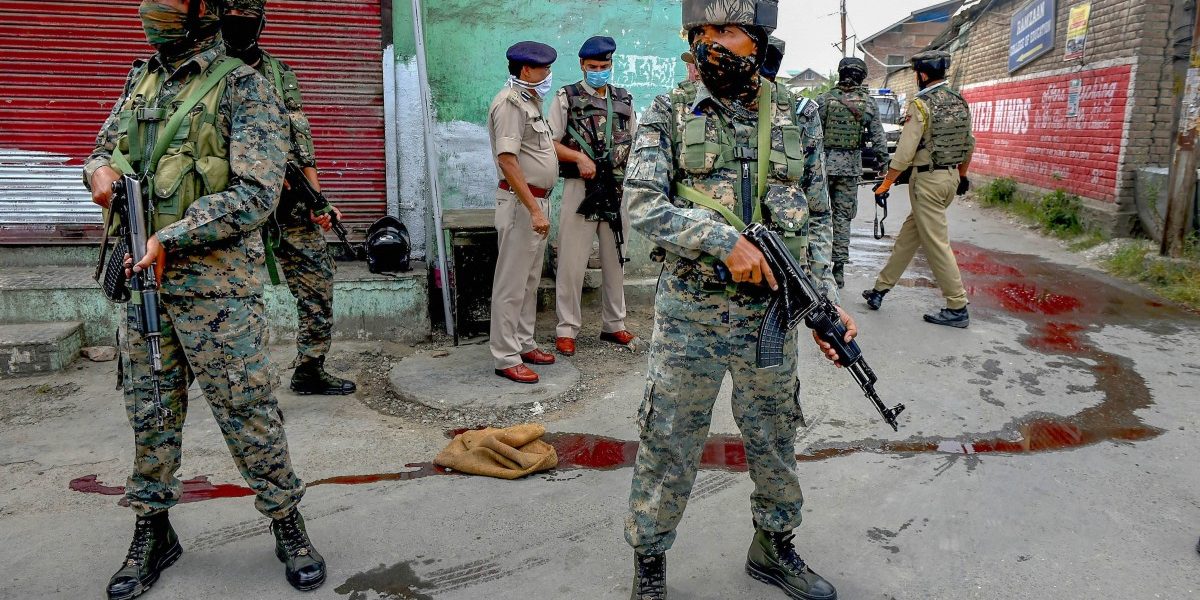 Security personnel stand guard at the spot after a militant attack, at Nowgam bypass in Srinagar, Friday, Aug 14, 2020. Two policemen were killed and one injured in the incident. Photo: PTI

Srinagar: A day before Independence Day, Jaish-e-Mohammad (JeM) militants shot dead two Jammu and Kashmir policemen and wounded another in indiscriminate firing in the Nowgam area on the outskirts of Srinagar, police said.

They said the militants have been identified and will be “neutralised soon”.

Militants fired indiscriminately on a police party near Nowgam bypass on Friday morning, a police official said, adding three policemen were injured in the attack.

The policemen were shifted to a hospital where two of them succumbed and the third was undergoing treatment, the official said.

Inspector-general of police (IGP) in Kashmir Vijay Kumar said the JeM carried out the attack.

“They fired indiscriminately and two of our jawans were martyred … We have identified them, they belong to JeM group. We will neutralise them soon,” Kumar told reporters near the site of the attack.

Asked whether there were any inputs about a possible militant attack on the eve of the Independence Day, the IGP said the police get such inputs every year.

“We have such inputs every year before August 15 and January 26. We had inputs that they will try (to attack) in some area. The boys were alert and prepared, but they (the militants) came from the rear side and fired on them,” Kumar said.

“We have cordoned off the area and the searches are on. This is a narrow lane and there was civilian movement and if our boys would have retaliated, there would have been loss of civilian, so they exercised restraint,” he added.

The Peoples Democratic Party condemned the attack, saying it will further aggravate the situation for Kashmiris.

“Vehemently condemn the attack on @JmuKmrPolice personnel. Such attacks further aggravate the situation for Kashmiris already reeling under double disaster post August 5. We join the families of deceased in mourning their loss,” the party tweeted.