Meenakshi Ganguly, South Asia director of Human Rights Watch, said it was the "responsibility of security forces to keep civilians from harm during an armed operation, not to place them in harm’s way.” 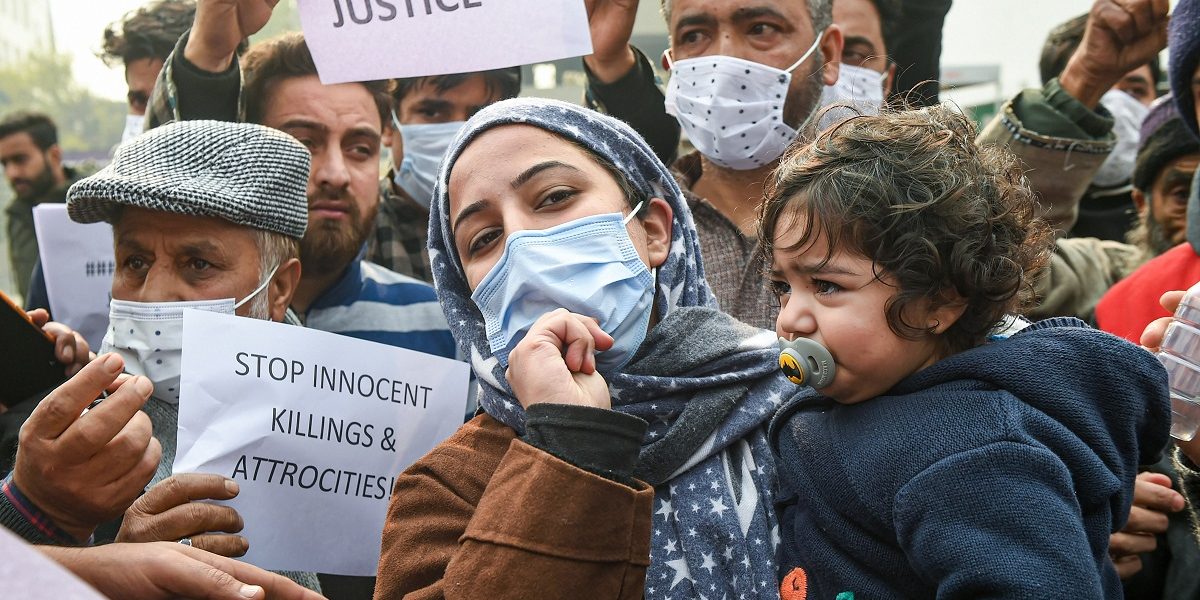 Srinagar: Human Rights Watch (HRW), the international rights advocacy group headquartered in the US, has sought a “credible and independent” probe into the allegations that a civilian was used as a human shield during a shootout in Srinagar’s Hyderpora locality.

Meenakshi Ganguly, South Asia director of HRW, said it was the “responsibility of security forces to keep civilians from harm during an armed operation, not to place them in harm’s way.”

“The authorities should immediately order a transparent, credible and independent investigation into this incident,” Meenakshi told The Wire.

The killing of businessman Altaf Ahmad Bhat, father of three minor children, in a controversial shootout that left four people dead in Srinagar, has sparked allegations that he was used as a human shield by security forces.

In a conflict situation, the Geneva Conventions, to which India is a signatory, forbid the use of human shields who can be either civilians or prisoners of war. A human shield is used by any side involved in a conflict in a potentially life-threatening situation to achieve their own military objectives.

According to Doctors Without Borders (MSF), a French non-profit which works in conflict zones, including Kashmir, the use of civilians “to shield military objectives or operations” is a violation of international humanitarian laws.

“Such acts are clearly established as war crimes under international humanitarian law. Many categories of persons are specifically protected by humanitarian law, such as civilians, the wounded and sick, prisoners of war, and medical personnel,” the MSF notes.

Eyewitnesses and family members who spoke with The Wire said a search team of security forces led by the J&K police asked Altaf, owner of the shopping complex in Srinagar’s Hyderpora locality where the shootout took place, to accompany them when they started the anti-militancy operation.

A statement issued by the J&K police also admitted that Altaf was taken along by the security forces. It said the anti-militancy operation was launched along with the Army’s 2 Rashtriya Rifles and the CRPF following “specific police inputs” about the “presence of terrorists” in the shopping complex.

“If security forces knew there were militants inside the building, why did they ask my brother to accompany them? They deliberately put him in harm’s way. He was used as a human shield,” Altaf’s brother, Abdul Majid Bhat, told The Wire, dismissing rumours that his brother was linked to militancy.

Majid’s claim has been corroborated by several eyewitnesses who saw the happenings at the shopping complex when the search unit started the operation on Monday at around 5:30 pm.

Two eyewitnesses who spoke with The Wire on the condition of anonymity, disclosed that when the search unit arrived, counterinsurgency forces in the civvies were already deployed in the area, “They asked the traders to down their shutters while other forces laid a cordon around the complex,” said an eyewitness.

Security forces then assembled the traders and their workers in a two-wheeler showroom housed in the shopping complex and seized their mobile phones. As the cordon was tightened, the search unit attempted their first entry into the complex. 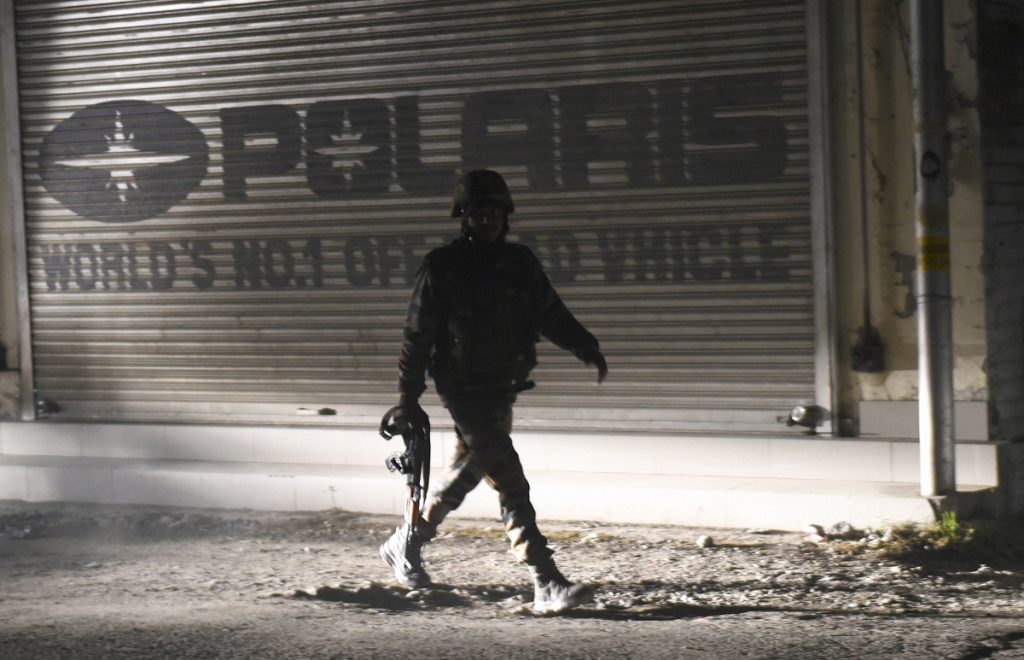 A member of the security forces during an encounter with militants at Hyderpora, in Srinagar, November 15, 2021. Photo: PTI /S. Irfan

“Altaf was closing his shop when they (jawans) asked him to accompany them while they searched the shopping complex. He obliged without any resistance,” said the eyewitness, who didn’t want to be named for the fear of reprisal by security forces.

After some time, the eyewitnesses said, Altaf and Dr Mudasir Gul, the second civilian killed in the shootout, walked out of the complex along with the security forces. “Altaf and Mudasir were asked to remain on standby outside the showroom. Some 30 minutes later, they were again taken into the complex after which there was firing. There is CCTV footage which can prove this,” another eyewitness said.

Inspector general of police (Kashmir) Vijay Kumar told reporters that Altaf and Mudasir, accompanied by security forces, knocked on the door of the room on the top floor of the shopping complex where the suspected militants were believed to be hiding, a potential violation of the Standard Operating Procedure. The Wire tried reaching the IG for his comment but he didn’t respond. This story will be updated if and when he responds.

A J&K police spokesperson said the suspected militants “started firing indiscriminately towards the party which was retaliated. However, in the initial exchange of fire, both the individuals (Altaf and Mudasir) accompanying the search party received critical gunshot injuries and succumbed to their injuries.”

Habeeb Iqbal, a human rights lawyer based in south Kashmir, said the statement of the J&K police suggests that Altaf was asked to accompany them when the “possibility of a gunfight was high”, which is “illegal.”

“Civilians can’t be used as human shields. This is irrespective of the fact whether the civilians are used voluntarily or involuntarily. These prohibitions are contained in the various instruments of international humanitarian law as well in the general laws,” Habeel said.

The J&K police claimed to have killed a suspected Pakistani militant and his alleged local associate, Aamir Lateef Margay, during the shootout. However, eyewitnesses claimed to have seen Aamir, a resident of Ramban’s Gool area who was working as a helper at the office of Dr Mudasir, leaving the complex when the search operation started.

“He was frisked by cops who asked him to hand over his phone. However, he told them that he was not carrying a phone and left the building,” said the second eyewitness.

Former J&K chief minister Omar Abdullah said on Wednesday that the police’s admission that the two businessmen were used to “knock on doors” of the militant hideout suggests that there were not militants. “They are civilians who died because they were put in harms (sic) way,” he wrote on Twitter.

To vilify them as militants or OGWs is bad enough but to take the bodies away & forcibly bury them in North Kashmir is a crime against humanity. The bodies must be returned to the families so they can be buried. It’s the only just thing & it’s the only humanitarian thing to do.

“To vilify them as militants or OGWs is bad enough but to take the bodies away & forcibly bury them in North Kashmir is a crime against humanity. The bodies must be returned to the families so they can be buried. It’s the only just thing & it’s the only humanitarian thing to do,” Omar said.

The families of Altaf and Dr Mudasir staged a protest in Srinagar’s Press Enclave on Wednesday evening, demanding that the police must return their mortal remains so that they could perform the last rites. Despite freezing cold conditions, the families, which included the wife and one-year-old daughter of Dr Mudasir, were planning to continue the protest through the night.

“We don’t want justice. We only want the body of my brother. We want to get a glimpse of his face and give him a decent burial close to his home so that we can visit his grave and pray for him,” Majid, Altaf’s brother said.