The four were covering an encounter in the south Kashmir region. 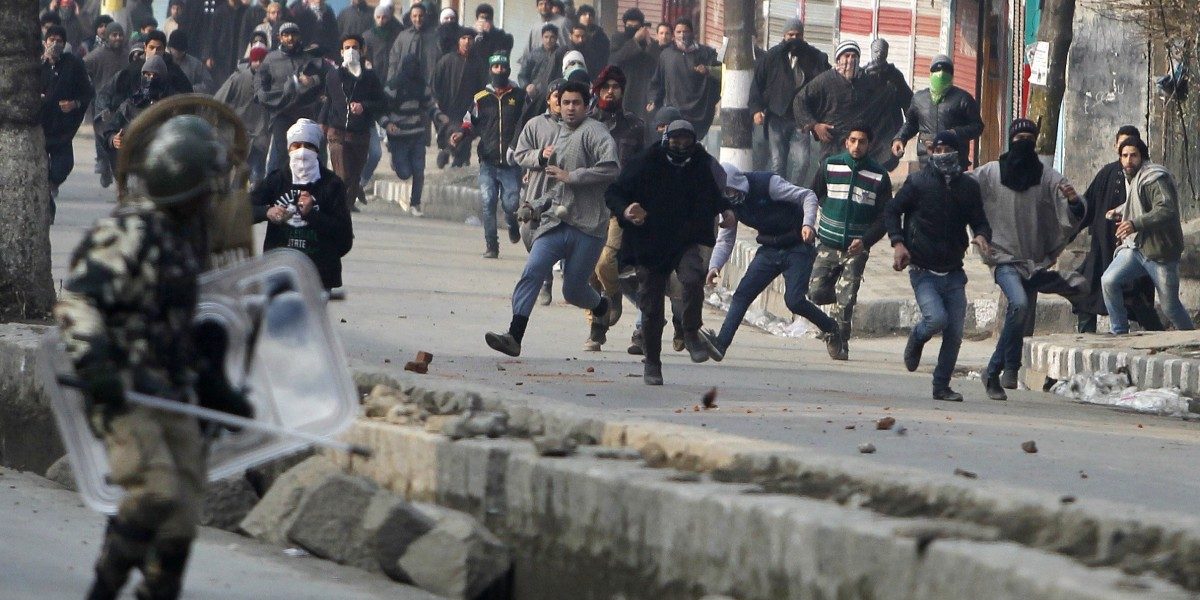 File photo of a protest in Kashmir. Credit: Reuters

Srinagar: Four photojournalists, including one whose photograph helping an injured CRPF trooper in Jammu and Kashmir went viral last year, were hit by pellets while covering a gun battle in the Shopian region on Tuesday.

On Tuesday, however, Andrabi was left with six pellet wounds in his face and neck, narrowly missing his eyes.

Speaking to The Wire, he narrated the sequence of events.

“Upon telling the locals that we were going to the spot to cover the incident, they allowed us to cross over. At some distance, the police and CRPF parties were holding their position as stone pelting had begun. I raised my camera to show that we were photojournalists and out of nowhere, we were showered with pellets,” Andrabi said.

While he received six pellets, including on his lips, forehead and neck, Rising Kashmir‘s Nisar ul Haq’s eye was injured in the violence, he said.

Andrabi was then taken to a local resident who removed the pellets from his face. The incident prompted statements of condemnation from all major journalist bodies in Kashmir.

“KPPA believes that the oft-repeated assault on the photojournalists is uncalled for and employing such tactics by the government forces won’t deter us from carrying out our professional duties. The association urges the governor Satya Pal Malik and director general of police Dilbag Singh to personally look into the matter and order a magisterial enquiry into the incident followed by strict action against the erring cops,” the association said

The Kashmir Press Club said “It is not the first time such an incident has happened. Most unfortunate that journalists are made a target when they are only performing their duties. It is appalling that pellets were fired at them”.

“This has become a routine that journalists while performing their professional duties are either thrashed or at time showered with pellets. KVJA appeals to governor and DGP to initiate strict action against those who are involved in today’s incident and make sure that it doesn’t happen in the future”.

The Wire reached out to the SSP of the area but the officer was not available to make a comment.

A police officer told The Wire that the state police will be releasing a statement. The copy will be updated with once the statement is issued.

Meanwhile, the CRPF said bodies of four militants had been recovered so far from the encounter site.

The militants, police said, belonged to Al-Badr militant outfit whose commander, Zeenat-ul-Islam was killed on January 13.