With Prime Minister Modi vowing to punish the perpetrators, a high level meeting chaired by the home minister reviewed the situation following the attack. 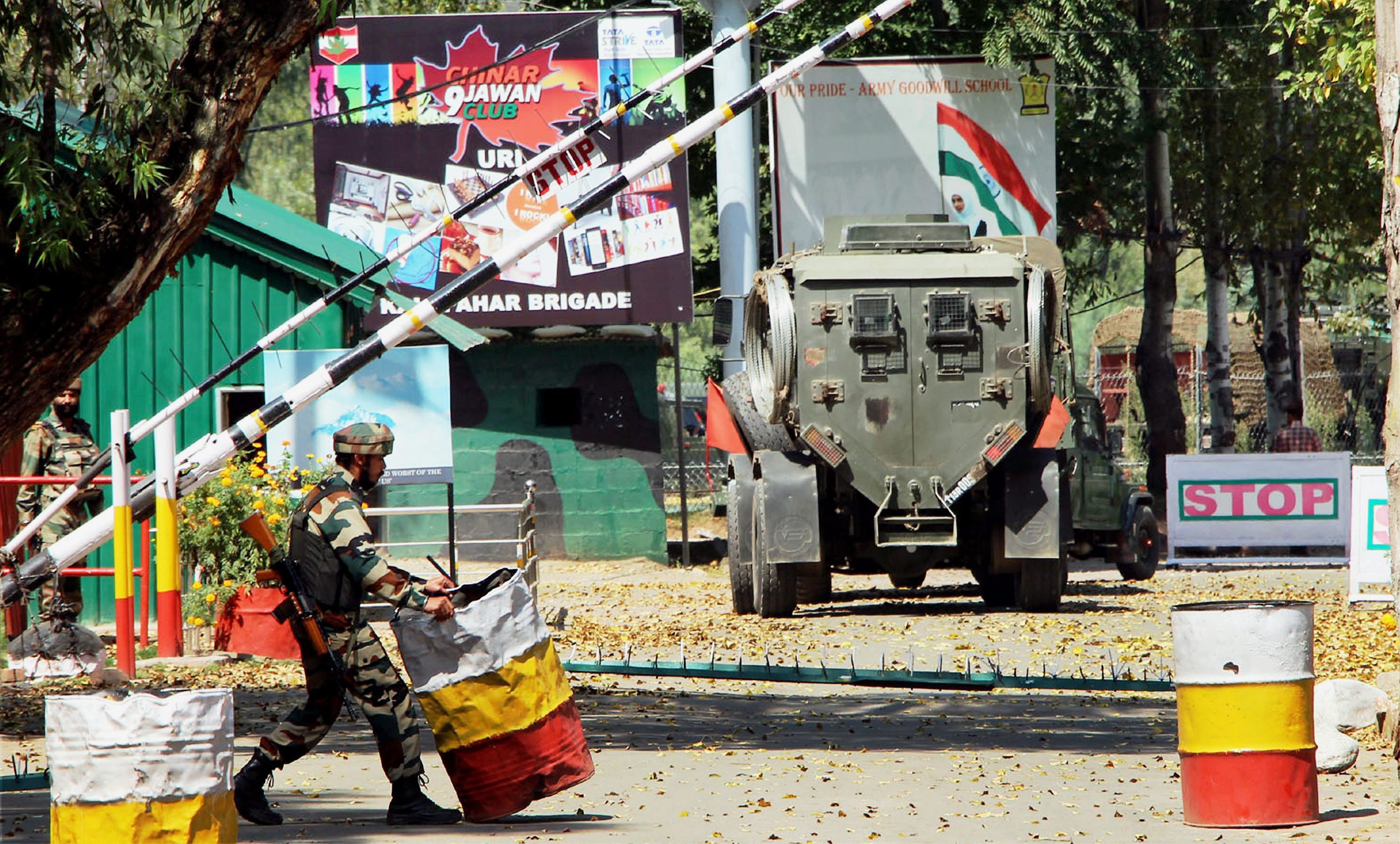 Army personnel in action inside the army brigade camp during a militant attack in Uri, Jammu and Kashmir on Sunday. Credit: PTI Army personnel in action inside the army brigade camp during a militant attack in Uri, Jammu and Kashmir on Sunday. Credit: PTI

Srinagar: Heavily armed militants stormed a battalion headquarters of the Army in north Kashmir’s Uri town in the early hours on Sunday, killing 17 soldiers and injuring 19 other personnel in an attack that saw the army sustain its highest casualties in a single incident since the loss of 20 soldiers in Manipur’s Chandel district last June.

PTI reports that explosions and gunfire erupted as the militants attacked the camp, located barely a few metres away from the army’s brigade headquarters in Uri town, 102 kms from Srinagar, around 4 AM.

The jawans of the Dogra Regiment were sleeping in a tent which caught fire due the explosion. The fire also engulfed the nearby barracks, official sources said.

17 jawans were killed in the attack, the northern command of the army said. Nineteen other personnel were injured in the strike in which four militants were killed. It is not yet known if attackers numbered more than four.

While a high-level meeting chaired by the Union home minister convened on Sunday morning, Prime Minister Narendra Modi responded to the Uri killing with a series of three tweets in which we vowed to punish “those behind this despicable attack”

We strongly condemn the cowardly terror attack in Uri. I assure the nation that those behind this despicable attack will not go unpunished.

We salute all those martyred in Uri. Their service to the nation will always be remembered. My thoughts are with the bereaved families.

Senior BJP leader Ram Madhav went one step further in amplifying Modi’s promise of punishment for the perpetrators, saying that ‘for one tooth, the complete jaw’:

“The Prime Minister has promised that those behind the Uri terror attack will not go unpunished. That should be the way forward. For one tooth, the complete jaw. Days of so-called strategic restraint are over. If terrorism is the instrument of the weak and coward, restraint in the face of repeated terror attacks betrays inefficiency and incompetence.

Madhav, who is on loan from the RSS to the BJP, also retweeted a tweet from senior journalist Shekhar Gupta:

If Pakistan thinks #UriAttack will have usual Indian non-response, it's delusional. This India has moved on from old strategic restraint

Though the government has not specifically blamed Pakistan for the Uri attack, an indication of the direction official thinking on the subject is headed was evident from Rajnath Singh’s tweets soon after his high-level meeting ended:

Pakistan is a terrorist state and it should be identified and isolated as such.

There are definite and conclusive indications that the perpetrators of Uri attack were highly trained, heavily armed and specially equipped.

I am deeply disappointed with Pakistan’s continued and direct support to terrorism and terrorist groups.

“A group of heavily armed terrorists targeted the rear administrative base of a unit at Uri, Kashmir. In the counter action, four terrorists have been eliminated and combing operations are in progress,” the army said in a statement.

#JKOps Please find a statement attached on the operation at Uri in J&K @adgpi pic.twitter.com/9I90qRiEWT

No group has claimed responsibility for the attack as yet, nor have official sources ventured to identify those involved.

“The administrative base had a large strength of troops of units turning over after their tour of duty who were stationed in tents/temporary shelters which caught fire, and resulted in heavy casualties. We salute the sacrifice of 17 soldiers who were martyred in the operation,” the army statement said.

Helicopters from the army’s 19 divisional headquarters in Baramulla have been pressed into service and the injured army personnel have been evacuated from the encounter site, the sources said.

Defence minister Manohar Parrikar and army chief General Dalbir Singh Suhag are rushing to Kashmir in the wake of terror attack in Uri.

The attack comes two years after militants had carried out a similar type of attack at Mohra in the same area. Ten security personnel were killed in the attack that took place on December 5, 2014.

It is believed that the attack was the handiwork of a freshly infiltrated group of militants who could have entered along the Salamabad Nallah into the town.

Rajnath Singh has postponed his scheduled visit to Russia and the United States in the wake of the attack in Uri and the unrest in Jammu and Kashmir.

He also spoke to Jammu and Kashmir governor N.N. Vohra and chief minister Mehbooba Mufti on the situation arising out of the Uri attack. NSA Ajit Doval leaves after a meeting called by home minister Rajnath Singh to review the situation arising out of the militant attack in Uri, at his residence in New Delhi on Sunday. Credit: PTI Photo by Subhav Shukla

The home minister was scheduled to leave for Russia tonight for a four-day bilateral visit and later to the US on September 26 for a six-day tour to attend the Indo-US homeland security dialogue.

“Keeping the situation of Jammu and Kashmir in mind and in the wake of terror attack in Uri, I have postponed my visits to Russia and the US,” he said in a statement here.

The home minister said he has spoken to Vohra and Mufti and discussed with them the situation arising out of the attack.

“I have given instructions to home secretary (Rajiv Mehrishi) and other officers in the ministry to closely monitor the situation in Jammu and Kashmir,” he said.

Condemning the Uri attack, the Communist Party of India (Marxist) said in a statement that terrorism is not the solution to the Kashmir issue. Such acts only compound the situation further. Pakistan must stop aiding and abetting the extremist forces. Such activities are a big impediment to the peace process in region.”

The party noted that despite the heavy deployment of security personnel in Kashmir, “the government has failed to stop the continuing infiltration of militants.” It also said that for a longstanding solution of the Kashmir problem, “the political dialogue with all stakeholders as advocated by the all Party delegation should be initiated without any further delay.”