The 'exodus' from the Valley continues unabated despite the Union government heightening its security response and asking locals to stay put.

A Kashmiri Pandit family returns to Jagti Migrants Camp in the wake of recent killings of employees in Kashmir by terrorists, in Jammu, Friday, June 3, 2022. Photo: PTI.

Srinagar: Even as the Union government is opposing the demand of the Kashmiri Pandits to relocate them to Jammu amid a sharp surge in targeted attacks on the region’s non-Muslim population, hundreds of Pandit families have fled the Valley in recent weeks.

Alarmed by the deteriorating security situation, Union home minister Amit Shah on Friday, June 2, chaired a second security review meeting on J&K within 24 hours. The meeting was attended by J&K’s lieutenant governor Manoj Sinha and top security brass of the country including national security advisor Ajit Doval and chiefs of other security agencies. 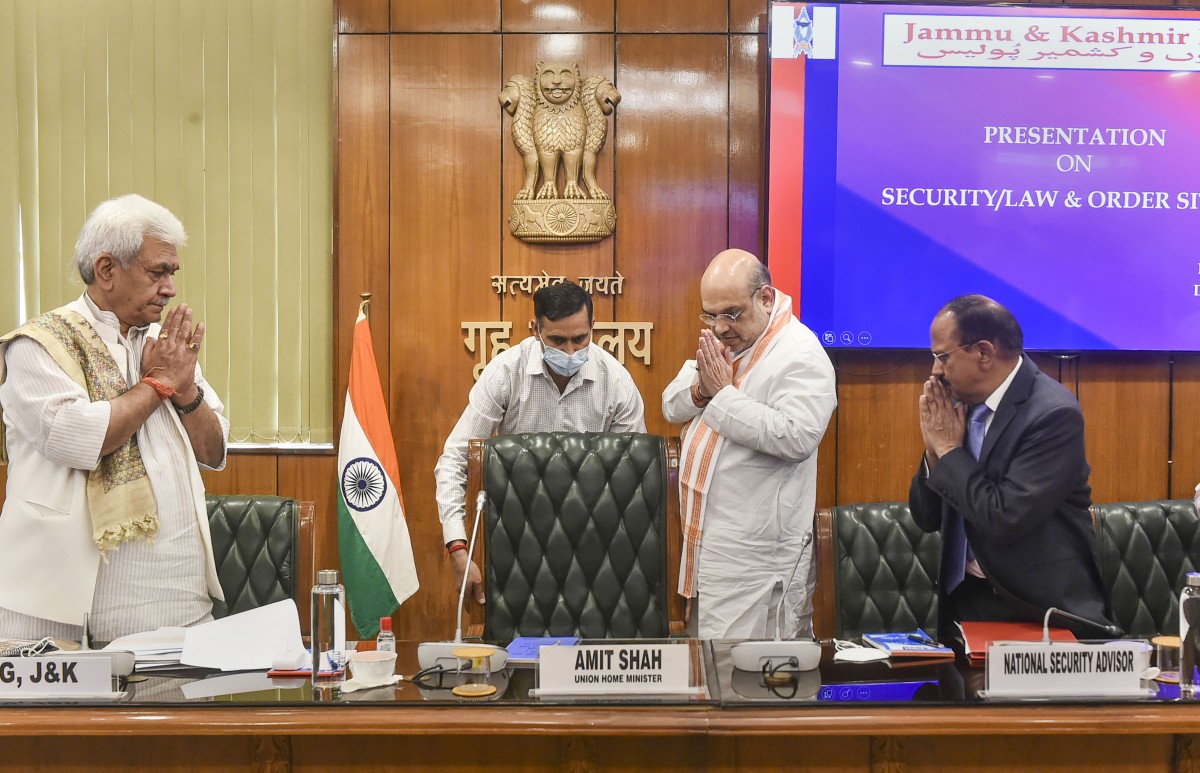 According to reports, the home minister was briefed about the situation in Kashmir during the meeting and the “active involvement of the anti-terror grid” for neutralising the culprits behind the recent civilian killings in Kashmir. There are also reports that the home ministry is contemplating further stepping up the presence of security forces and the creation of “exclusive zones” in Kashmir for migrant employees.

However, The Wire could not independently verify the reports.

The meeting on Friday was the fifth official security review of Jammu and Kashmir by the home ministry this year. The earlier three meetings were chaired by Shah on February 18, March 19 and May 17 in the aftermath of the increase in the attacks on unarmed civilians, off-duty security personnel and political activists, and the security arrangements being made for the upcoming Amarnath pilgrimage.

In the run-up to the 43-day pilgrimage, which is now less than a month away, the security situation has deteriorated alarmingly, especially in Kashmir where six civilians including a government clerk, a government teacher, a private wine shop employee, a TV artist and a migrant worker have been killed in targeted attacks over the last three weeks. Two among the deceased were women and one of them was a Kashmiri Muslim.

On one of the worst days this year, two civilians and an army soldier were killed in targeted attacks on Thursday, June 2. A newly-wed young man from Rajasthan identified as Vijay Kumar who was recently posted as the manager of Ellaquai Dehati Bank’s Kulgam branch in south Kashmir was among those killed on Thursday. Jammu-based government employees, posted in Kashmir, stage a protest demonstration for their transfer to their home districts, in Jammu, Friday, June 3, 2022. Photo: PTI.

Since January 2021, official data shows that 55 civilians have been killed in targeted attacks in Jammu and Kashmir by militants. This year, at least 19 persons, including four Panchayat members and off-duty security personnel, have been gunned down in Kashmir till June 2, which is almost double the number of such killings during the corresponding period of last year.

Hybrid militancy on the rise

Security agencies believe that the attacks are being carried out by hybrid militants using small firearms, sometimes fitted with silencers, to avoid setting off alarm bells. A hybrid militant has no criminal record in official books, making it difficult for the security agencies to identify them. Wearing the cloak of anonymity, hybrid militants are armed with small arms, like pistols and grenades, and they melt into the crowds after carrying out attacks.

On May 23, the J&K Police arrested two hybrid militants affiliated with Pakistan-based Lashkar-e-Toiba. At least 15 pistols, 30 magazines, 300 rounds and one silencer were recovered from their possession. Security agencies believe that the hybrid militants are being trained to stage surprise attacks with the least chances of getting caught.

The Hindu has reported that Kashmir has been “flooded with small weapons in the past six months, pushed into India from Pakistan through drones and tunnels along the Jammu border.”

A senior J&K police officer told The Wire that the renewed wave of targeted attacks, including a string of explosions in the Jammu region which was largely militancy free before August 5, 2019, is an attempt by militants to “project the deterioration in the security climate as a pushback against the alleged demographic change of Jammu and Kashmir”, the country’s only Muslim majority state, following the reading down of Articles 370 and 35-A.

This was illustrated in a letter circulated made by ‘Kashmir Freedom Fighters’, an offshoot of Lashkar-e-Toiba, which claimed the responsibility for killing Vijay Kumar, the bank manager, in Kulgam on Thursday.

“In wee hours, our cadre carried out an intelligence-based operation in Arrah Kulgam in which a non-local bank manager Vijay Kumar holdings domicile was eliminated. Anyone involved in the demographic (sic) change of Kashmir will meet the same fate,” the letter signed by the group’s self-proclaimed Waseem Mir, stated.

Breakdown of law and order

National Conference president and member of parliament, Dr Farooq Abdullah said on Thursday that the targeted killings belied the claims of normalcy in J&K by the Union government.

“This ostrich approach will push the situation to a point of no return. We feel sorry that innocent people are being killed one after another,” he said.

After the latest attack on two migrant workers in Budgam district on Thursday evening, the Peoples Democratic Party led by the former chief minister of J&K, Mehbooba Mufti, alleged that there was a “total breakdown of law and order” in Jammu and Kashmir.

“Will the govt still parrot the narrative of normalcy or has it internalised its own propaganda. Condolences with Dilkhush’s family & praying for speedy recovery to the other. Has peace been ‘established’?” the party tweeted.

CPI (M) leader M.Y. Tarigami said that the “cowardly killings of unarmed civilians” in Kashmir showed “the utter failure to provide security to people by the Central Govt run administration,” he said in a statement.

In a petition filed with the J&K and Ladakh high court, Kashmiri Pandit Sangharsh Samiti (KPSS), a prominent body of Kashmiri Pandits who stayed back in Kashmir when insurgency erupted in Kashmir, alleged that the government was forcing the migrant employees to stay back.

A Kashmiri Pandit family while returning to Jagti Migrants Camp in the wake of recent killings of employees in Kashmir by terrorists, in Jammu, Friday, June 3, 2022. Photo: PTI.

Sunny Raina, President of Pandit Welfare Committee of transit camp for migrant employees in Vessu area of south Kashmir, said that around 700 Kashmiri Pandit families, who were living in rented accommodations across Kashmir, have fled to Jammu since May 12 when Rahul Pandit, who worked as a clerk in J&K government, was shot dead inside his office.

“None of us feels safe here. Even our children are unable to attend their schools. We don’t want them to return in coffins. The government must relocate us till adequate transit camps are built for all the migrant employees in Kashmir. We will not resume duties unless our demands are met,” he told The Wire.

Raina said that the J&K administration, which is run directly by New Delhi, must attach all the migrant employees with the UT’s Relief and Rehabilitation Department which disburses assistance under the PM’s special package among Kashmiri migrants, “60% migrant families live in rented accommodations and most of them have gone back to Jammu,” he said.

“I left a lucrative job in Mumbai and returned to Kashmir. But it has become difficult to live there. You can’t go out to buy groceries because you may well return in a coffin. One feels like a prisoner,” said another Kashmiri Pandit, who returned to Jammu in the aftermath of Rahul Bhat’s killing.

“Once there are enough protected colonies in Kashmir for migrant employees and their families, they will resume their lives without fear of getting targeted by terrorists. The government must expedite the construction process and provide us a safe environment,” Raina added.