Rafale and the CAG: A Case of Redaction Ad Absurdum

The national auditor's track record of excising 'sensitive' material from its reports on military equipment is not only inconsistent but shockingly inefficient as well. 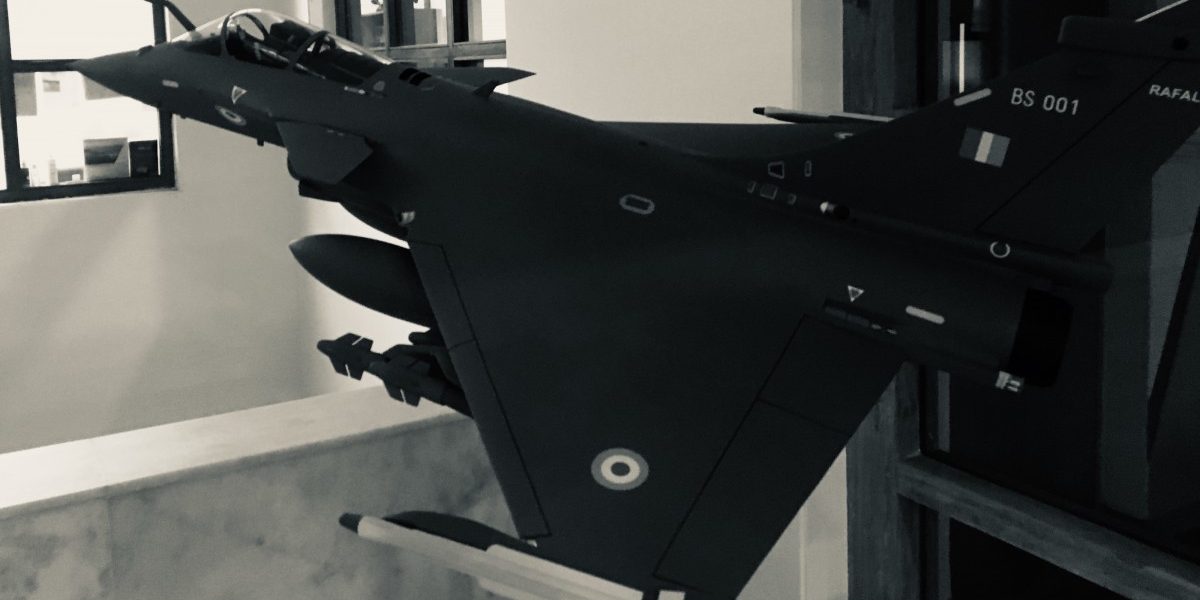 A model of the Rafale fighter, outside the French ambassador's office at the Embassy of France in New Delhi. Credit: The Wire

The Rafale issue provides yet another opportunity for a still-growing up republic to fix issues of transparency and accountability of its political class. Simultaneously, it provides yet another opportunity to correct the culture of largely unquestioning and unintelligent discourse related to national security issues. This remains the biggest threat to national security, rather than a lack of military hardware or the allegedly anti-national nature of JNU.

The issue of Comptroller and Auditor General reports has now gathered steam, thanks to a karmic faux pas by the Modi government in its sealed cover submission. Unfortunately, the discussion seems to have veered towards whether there is a precedence for redaction in CAG reports. The short answer – there is. The real question, however, is whether there is any logic to how redaction occurs in CAG reports on defence.

A  2015 report on the Air Force typifies the farcical nature of redaction most commonly found in such CAG reports.

On page 9 of the report, the identity of a certain aircraft type in operation with the IAF is sought to be redacted by providing it with a nomenclature “AA.” Except the same sentence specifies that its role “provides air and surface surveillance within a given airspace”.

In that period, the IAF only operated one aircraft type in this role. More help is provided in undermining the redaction, to cite just two – on page 13, a reference to an Indo-Israeli-Russian Tripartite agreement, and on page 15 a reference that “AA” is co-located with the IAF air-to-air refuelling fleet at base “S-3.”

Also read: Here’s Why the Supreme Court’s Rafale Verdict is Not a ‘Clean Chit’ for Modi

Forget the intel analysts of India’s adversaries, the multitude of keyboard warriors populating internet forums in those places could tell you that “AA” is the Phalcon AWACS, and that “S-3” is Agra.

Other sections of this report try and obscure the identity of different systems. On page 56, we are introduced to Aircraft “C” and then promptly told that we intend to have a fleet of 272 of them, so we can charge Google with espionage when a search for “272 + IAF” reveals that this is the Su-30MKI.

Page 67 features aircraft “DD” with multi-mode radar “BB” – the Mig-21 UPG/Bison and its Kopyo radar, thanks to the CAG helping us with the date of induction, the number of aircraft upgraded, and the country of origin.

The  2017 CAG report on the Air Force contains observations on an unnamed “strategic missile system” inducted in the redacted “S” sector.  What does this redacting achieve and why is it persisted with when report after report in the mainstream media is able to identify both the system – Akash, and the sector/adversary – North East and Ladakh/China. One report even attributes a source for this information, who clearly didn’t get the redaction memo.

It is said that “a foolish consistency is the hobgoblin of little minds.” However, little but inquiring minds like us would like to know what accounts for the wildly inconsistent policy on redactions. The same report that is loathe to name the “strategic missile system” has no problems naming the IAF’s Jaguar aircraft on page 18. There is a great irony in naming the Jaguar, which will become clearer towards the end of this article.

If at all an argument – albeit highly flawed – could be made for redaction, it would be on operational parameters. Ironically, none of these are redacted in the various CAG reports e.g.  the percentage of manning (aircrew) in a squadron or the flying hours achieved (Page 19 and Page 12 of the 2015 CAG Report on IAF). The CAG is fine detailing the availability of a certain aircraft type (Page 62 and 75 of the 2015 CAG Report on IAF).Which again begs the question what is the logic behind a redaction?

The CAG’s auditors do not determine which information should be redacted; that instruction can only come from the service that is being audited or from someone at MoD. Could the “redaction police” please take a page, or better, multiple pages out of the  2016 CAG report on the Navy and Coast Guard? This places in the public domain the disturbing state of the availability of the Navy’s Mig 29K/KUB fleet, and the problems with its RD-33MK engines without resorting to a single redaction. It’s internally consistent too: no redaction when talking about issues with magnetrons in the Sea King helicopter’s Super Searcher radar system (Page 73).

It is no one’s case that redactions are completely unnecessary, but those redactions have to actually keep things secret – the pros of redaction need to outweigh the cons or have some other solid rationale to back it. An arbitrary policy of farcical redaction only undermines the objective of the CAG reports – compliance and accountability. Worse, it creates a pernicious precedent which can then be used in other instances to hide mala fide intent and acts.

Once random redactions become the norm, even an informed reader gets used to the idea of redactions rather than question the need for a redaction. Combine that with frequently abused terms in the defence domain like “strategic” and you have carte blanche.

So, the Akash missile becomes a “strategic missile system” in the CAG report despite a clear military convention that when used in the context of weapon systems, “strategic = nuclear/nuclear capable”. We have seen this before, and outside of CAG reports. When the Pathankot fiasco has to be mitigated, invoke “strategic assets” being saved from terrorists. No matter the aircraft at the base were far from strategic in nature. The “surgical strikes” are described as strategic (a different military context but equally misapplied), even though the man at the helm of the strikes seems to be increasingly uncomfortable with that narrative.

Once you are conditioned by precedent to accept the usage of certain terms and behaviour, naturally the only question you will ask to determine whether something is correct is, Is there a precedent?

The stage has clearly been set for the Rafale redaction. In a report carried by the Hindustan Times, there is a significant quote attributed to a senior MoD official: “The IAF was of the view that revealing the price of components would give away the capability of Rafale fighters.”

How exactly does revealing the price, for example, of the Meteor air-to-air missile reveal the capability of the aircraft or even the missile in question is a follow-up question rarely asked. Is there a correlation between the price and the range of the missile or the frequencies on which its much hyped 2-way data link with the launch aircraft operate?

To ensure that the CAG’s not out of the bag, the HT report also invokes the “S” word – strategic:The “IAF advised against revealing the detailed price break-up of types of equipment and weapons of the fighter and went on to underline that fighters would also double-up as a strategic platform.”

Thankfully, in this case “strategic” aka nuclear/nuclear capable has been used in the correct context. However, the IAF’s exact advice is not clear. Is it against disclosing the pricing of any “strategic” equipment/weapons (assuming these exist) on the Rafale or the pricing of every equipment/weapon on the Rafale since it is also a strategic platform?

If it is the former there is a very simple solution: redact the name of the “strategic” hardware, and only list the price against it. If our adversaries can still identify it, we might as well disband our armed forces who will be powerless against such an omniscient opponent.

If it’s the latter, then it’s bad news for precedent seekers. On page 18 of the 2015 CAG report on the IAF, the price and numbers of an equipment related to the Jaguar – a fighter that also doubles up as a strategic platform is provided – with zero redactions.

Moreover, the famously redaction-happy 2015 CAG report on the IAF (featuring “AA”, “C”, “DD” and “BB”) goes into explicit non-redacted detail about not only pricing but also numbers and a whole range of issues to do with the Jaguar’s DARIN-III navigation-attack system upgrade which is central to its “strategic” weapons delivery mission.

None of what has been posited so far will dissuade more specious arguments from being dreamt up to defend the opacity around the Rafale deal by the usual suspects.

Instead, it is for taxpayers with intellectual integrity who demand high standards of probity from those holding office to examine closely what the CAG details in its report on the Rafale. and even more importantly what it redacts.

A. Seetimar is the pseudonym of an analyst who specialises in defence. Further biographical notes have been redacted.