'They Killed Him in Front of My Eyes': Anger in Pulwama After Seven Dead in Firing by Forces

Locals claim army personnel fired directly at protestors who were nowhere near the encounter site. 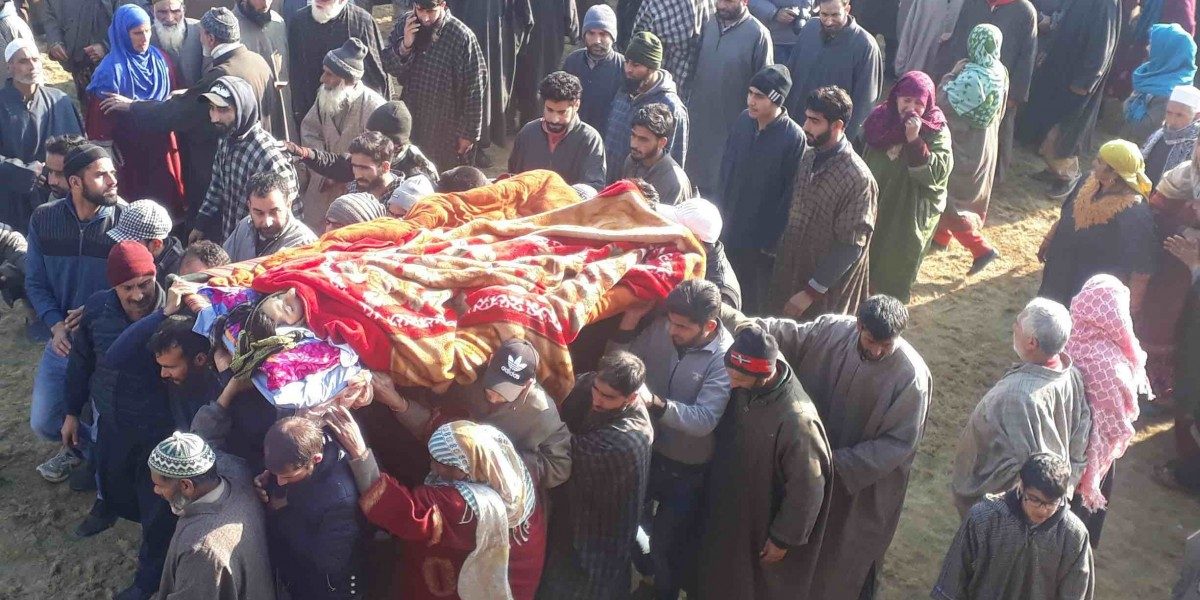 Body of one of the seven civilians who were killed in the forces' firing in Pulwama being taken for final rites. Credit: Mudasir Ahmad

Sirnoo (Pulwama): Muhammad Yusuf was awakened an hour past midnight by the noise of vehicles outside his house. He peered out the window to discover that the army was moving in. Quietly, he rushed to his son Shahnawaz Ahmad’s room and covered the windows with thick blankets. To his satisfaction, Ahmad was fast asleep.

Forty-seven-year-old Yusuf then returned to his bed only after watching the last vehicle in the convoy move beyond his house in Pulwana’s Monghama village. By the time the muezzin recited the call for the pre-dawn prayer, the army had laid a siege around the entire area.

The first gunshots were heard at around 7 am, recalled Yusuf, a carpenter by profession. “Soon, news spread that militants have gotten trapped. I cautioned my wife not to wake up Shahnawaz.”

As the encounter raged between forces and rebels, who were cornered inside their hideout – a pit dug on the slope of an orchard in Sirnoo village – Yusuf stayed home, worrying his son might go out and join the protesting youth in nearby Kareemabad village.

At around 9 am, the father-son duo had their morning tea in the kitchen, and barely 20 minutes later, Shahnawaz, a Class 12 student, was lying dead in a pool of blood just outside their home. 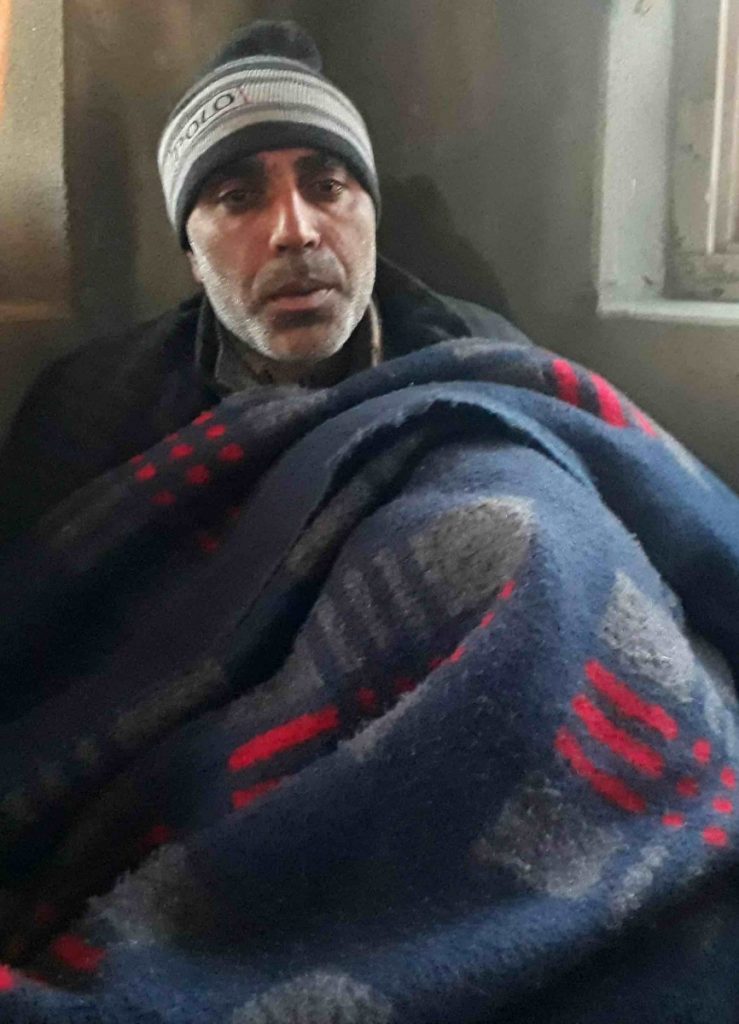 Muhammad Yusuf, father of slain Shahnawaz Ahmad who was killed by the forces outside his house in Monghama village of Pulwama district.

The 19-year-old was fired upon by forces while they were retreating from the battle site, his father said. “The encounter had ended and forces were moving out when my son went out to fetch a bucket of water from a spring across the road. There were protests going on in nearby villages. He (Shahnawaz) was on his way back when forces fired directly at him from inside the vehicle… I watched him fall down as he cried for help. They killed him in front of my eyes and I watched it all helplessly,” Yusuf broke down.

By the time the sun shone over Pulwama, the Valley, marred by decades of political conflict, was struck by yet another tragedy. Ahmad was one of the seven civilians. One after another, each was rushed to Pulwama district hospitals where they were declared brought dead. This after three militants and an army official were killed in an early morning encounter.

“All of them (the civilians) had bullet wounds above their waist – on head, abdomen or chest. A bullet had made a deep hole in the neck of one of the civilians,” a doctor who was on duty at the hospital told The Wire.

Throughout the day, the hospitals received more than three dozen youth with “varying firearm injuries”. “It was mayhem,” another doctor said, describing the scene. Seven critically injured, four with bullet injuries and three with pellet injuries were shifted to Srinagar hospitals for treatment.

The situation, according to the doctor, was so grim that they had to appeal to the people on the public address system to donate blood.

‘They fired directly at protestors’

A statement issued by the J&K Police said that while the operation was going on, a “crowd which came dangerously close from different parts to the encounter site got injured”.  “The injured were evacuated to a hospital where unfortunately seven persons succumbed to their injuries. Others who were admitted in the hospital are stated to be stable,” the statement reads, without mentioning how the civilians were injured.

Locals from Sirnoo village, however, contested the police’s claim. A house belonging to one Fayaz Ahmad is nearest to the site of the gunfight.

“There was heavy stone pelting going on in adjoining villages including Kareemabad and Monghama as protesting youth were trying to move towards the encounter site,” said Fayaz. “But they (the youth) couldn’t break the cordon.”

By 8:30 am, he said, the encounter was over as forces had shot dead all three militants, including top commander Zahoor Ahmad who had escaped the army last year. “Not a single youth could reach the encounter site… all seven civilians were killed away from encounter site,” Fayaz asserted.

Sonaullah, an elderly man from Monghama, gave his account of the killings. “As the forces were moving out, almost an hour after the firing had stopped, their vehicles came under heavy stone pelting and they instantly resorted to indiscriminate firing, which led to the killings,” he said.

A youth, Muzamil Hussain from Karemabad, said: “There was widespread anger following news about the death of militants…hundreds of youth had gathered and were raising pro-freedom slogans when an army vehicle, which was moving out from encounter site, was caught in stone pelting. In retaliation, soldiers fired directly towards the crowd from inside the vehicle, leading to casualties. They could have fired warning shots in air to disperse the protestors,” he said. 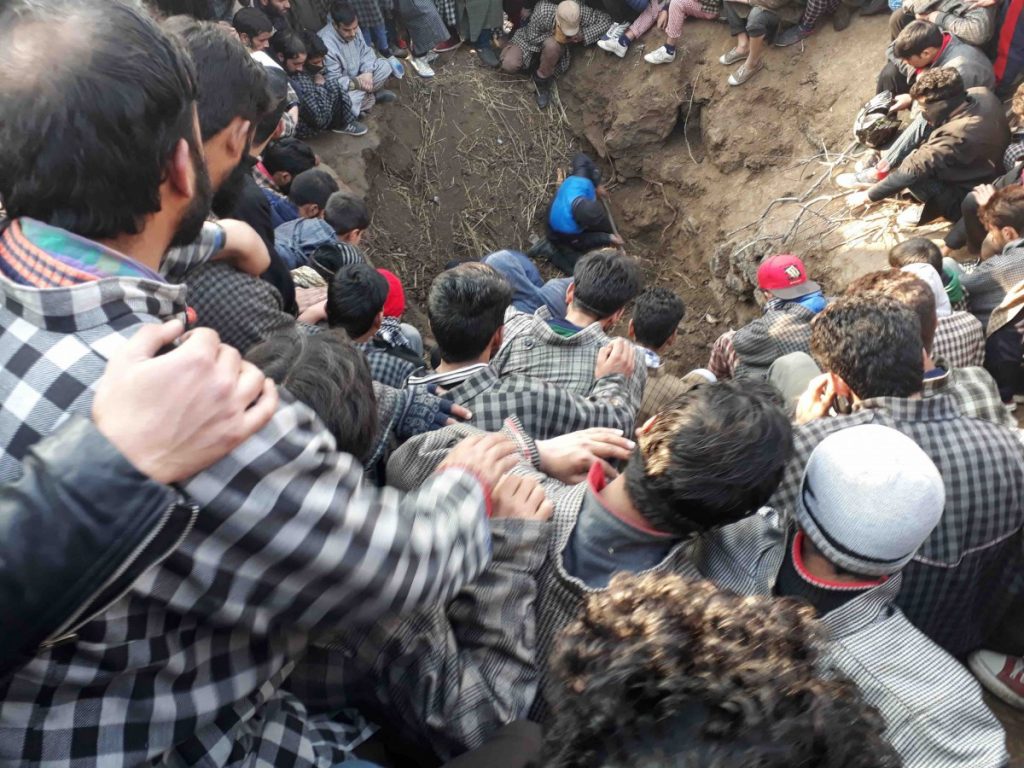 People swarmed the gunfight site where three militants were killed by forces in a Pulwama village on Saturday.

While five of the slain civilians lived in a village within a two-kilometre radius from the encounter site, two others had come from Below and Warchsoo villages, almost ten kilometres away from Sirnoo.

Two teenage students, a government employee, a graduate in business administration and a mechanic, were among the seven civilians that were killed on one of the deadliest days in the Valley this year. The Class 8 student, Murtaza Ahmad of Pirchoo village, was the youngest among them. A bullet had pierced his head on the right side.

Dirges, slogans and the last glimpse

By late afternoon, people in the cluster of village which saw their young falling to bullets were out on the roads. Women sung dirges, queued up in long rows to have a last glimpse of the slain, while the men, mostly young boys, raised pro-freedom slogans.

The largest assembly was witnessed at “Martyr’s Graveyard” in Kareemabad which buried two of its sons, a rebel and a civilian Abid Hussain Lone, who according to a local, was fired upon by soldiers from an armoured vehicle which had gotten stuck on a roadside – away from the battle site.

“We may be weak but we won’t give up. We have given our sons, our blood to this movement, it will not go in vain,” an elderly woman, Raja Begum wept bitterly as the body of Abid Lone was taken for burial. 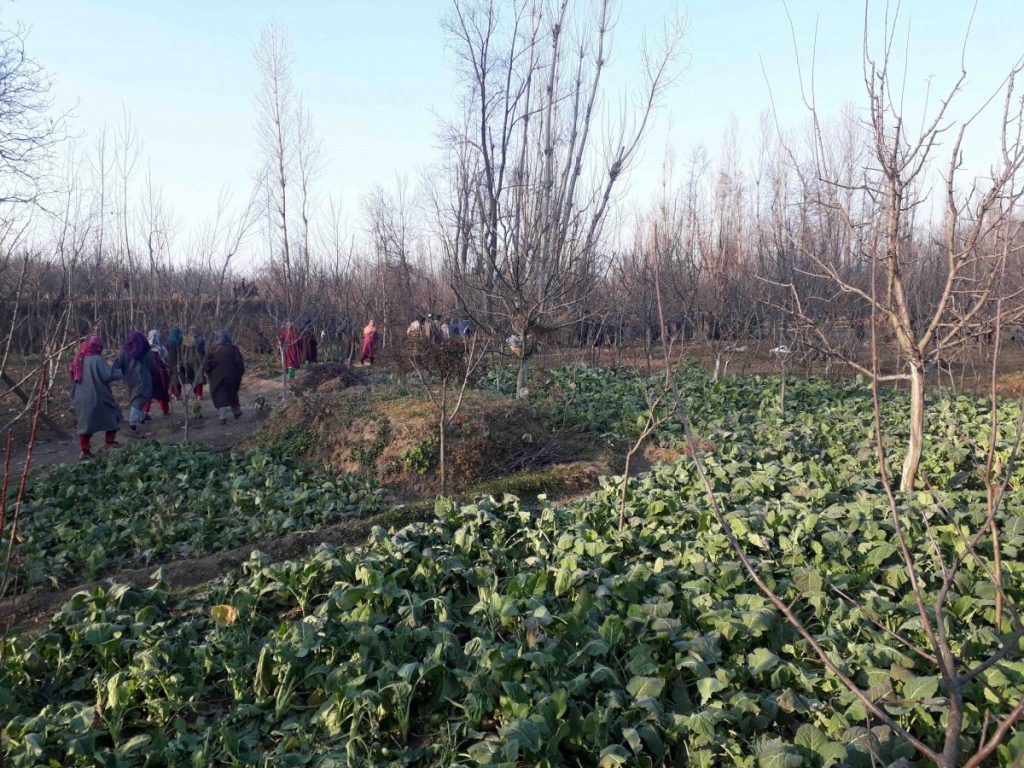 People moving towards the encounter site where three militants were killed in Sirnoo village of Pulwama on Saturday.

No end to killings at gunfight sites

With these seven killings, the total number of civilian fatalities witnessed at encounter site this year has gone up to 58, as per official data. There has been a gradual rise in such killing post-2016. Each time there is an encounter, people rush to the sites, pelt forces with stones to try and help trapped militants escape.

Also read: Kulgam Deaths Leave Kashmir in Mourning With No End in Sight to Decades of Conflict

But Sajad Lone, an ally of the BJP, demanded action against the forces. “The preparedness of security forces would in the Pulwama context be the ability to make the distinction between combatants and non-combatants. If u end up killing 7 civilians in order to kill 3 militants. It is time for heads to roll. We can’t afford a state of impunity,” Lone tweeted.

The separatist trio of Syed Ali Shah Geelani, Mirwaiz Umar Farooq and Muhammad Yasin Malik, on the other hand, called for a strike till December 17 and urged people to gather around the army’s 15 Corps headquarters in Badami Bagh cantonment area of Srinagar on Monday.

“Shouldering coffins of our youth each day is now unbearable as is the silence of international community at massacre in Kashmir. It is better that government of India finish us off at once and that is why we have asked it to do that as we march towards their army headquarters in Badami Bagh (Srinagar) on Monday,” said a joint statement issued by them.