Going by the accounts of family and friends, Adil Ahmad Dar was an unlikely recruit to militancy. Authorities, too, did not see him as a great threat, classifying him as a 'category-C militant'. The house of Jaish-e-Mohammad militant, who carried car-bomb attack on CRPF convoy on Thursday, in Gandibagh village of Pulwama. Credit: Mudasir Ahmad

Gandibagh, Pulwama: A die-hard fan of the Indian cricket team, Adil Ahmad Dar  grew up in the shadow of the gun – like any other Kashmiri boy of his generation. But unlike them, his family says he never participated in any ‘Azadi’ protests – not even when most of the Valley was out on the streets during the summer uprising of 2016.

All this, however, changed on the afternoon of March 19, 2018 when the class XII student suddenly disappeared. Days later, his gun-wielding picture showed up on social media, leaving his family – and people of Gandibagh, a village in the middle of barren apple trees and vast paddy fields – shell-shocked.

The word on the street was that Adil Ahmad had not just joined the Jaish-e-Mohammad (JeM) outfit but “volunteered” for its deadly fidayeen, or suicide mission, squad. “We desperately searched for him for over a month, but finally gave up,” says his soft-spoken father, Ghulam Hassan Dar. 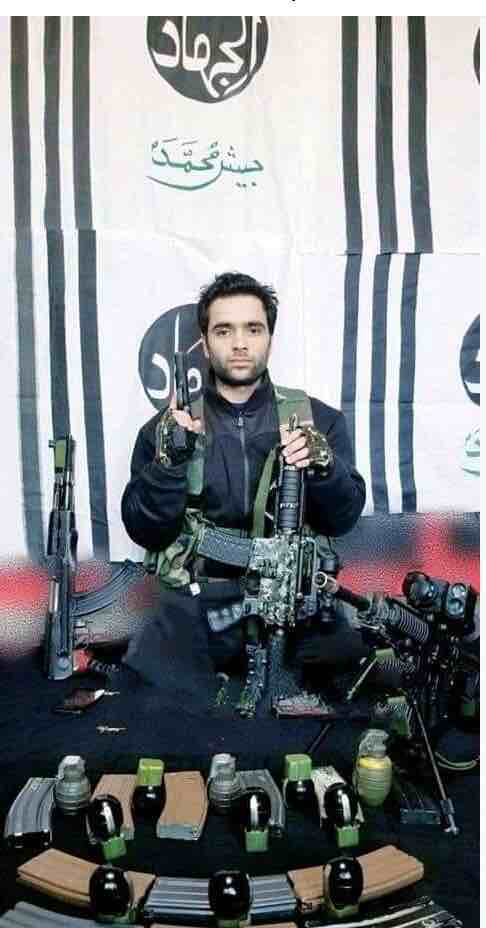 On February 14, the 47-year-old Dar was drinking tea with his family when a police official from the local thana phoned him to break the news that Adil Ahmad had carried out a suicide attack in Lethpora area of Pampore.

A ‘category-C militant’, the 19-year-old – now known as Waqas Commando – had detonated his explosives-packed car next to a CRPF convoy that was on its way to Srinagar from Jammu, killing at least 49 troopers. It was the deadliest attack by militants on security forces in Kashmir since the insurgency broke out in the 1990s.

“We never thought he would join militancy. We never saw him after he left home,” says Dar, who was surrounded by a group of mourners from the neighbourhood.

Adil Ahmad was an average student. He also worked as a seasonal labourer with carpenters and at times at a nearby saw-mill to make apple boxes in order to help his family financially. His elder brother is a carpenter while his younger brother is enrolled in a local school.

In September 2016, Adil Ahmad sustained a bullet injury in his left leg in nearby Newa village when, according to his brother Javaid, he, along with some locals, was helping a friend who had been injured in anti-government protests. “He was in shock for many days and didn’t come out of the house for almost three months,” Javaid recalls.

One of Adil Ahmad’s classmates who sat among the group of mourners seconded Javaid. “In our friend’s circle, he was a person of few words, a shy kind of a person. But we often had arguments with him over his untiring support for the Indian cricket team.”

Adil’s cousin, Manzoor Ahmad Dar, a militant with Lashkar-e-Tayyaba, was killed in a gunfight with security forces on June 30, 2016 – just ten days after taking to militancy.

His second cousin, Touseef Rashid had also left home to join militancy last year. But he returned within a fortnight and has since then been lodged in Srinagar jail, Adil’s uncle told The Wire.

Recalling the day Adil Ahmad went missing, Javaid said his brother had come home for lunch from work. “He left on his cycle, but told us that he would return late,” he says.

When the teen, the second of three sons, didn’t turn up till late that night, the family grew anxious and finally lodged a missing person’s complaint with the local police station the next day.

“Every father knows the fate of his son who chooses this path [of militancy],” Dar says. “It is painful. But there are times when you are helpless and can’t do anything.”

Then, after a long pause, he continues: “Every life is precious, be it of a soldier or my son. How long will we continue to lose young lives? The two countries [India and Pakista] should resolve the Kashmir issue. That is the only way to stop the bloodshed.”

The short-statured Dar also directed his anger at the two prominent political families of J&K – the Abdullahs and Muftis – for “ruining Kashmir”. “They are responsible for our misery and for pushing our young ones to graves. They run their politics on the blood of our sons,” he blamed. Since Thursday evening, the situation in villages circling Gandibagh and Kakpora – the main business town in the area –  has been tense. Though security forces have controlled key roads and sealed all routes leading to the village, young boys have clashed with CRPF troopers and policemen at several spots.

Despite restrictions, a steady stream of people including women has continued to visit the Dar family. A JeM flag has been hoisted at the entrance of the house. By late Friday afternoon, three funeral prayers in absentia had already been held for Adil Ahmad.

Hailing from south Kashmir’s Pulwama district, which has seen dozens of young and educated boys getting drawn towards militancy, Adil Ahmad was the second Kashmiri recruited by the JeM for a suicide mission in recent years. Before him, 16-year-old Fardeen Ahmad from Tral was part of the outfit’s fidayeen group that stormed the CRPF’s training-cum-induction centre at Lethpora on December 31, 2017, killing five troopers.

“Had you met my son earlier, you would never have imagined that he was going to take this step. He was docile among all my sons…the entire village will vouch that he used to run away from protests and stone pelting,” Adil Ahmad’s mother says as other women in the room look at each other, perhaps wondering what led the young man from their neighbourhood to turn into a human bomb.