So Far, the Curfew in Jammu Is in Name Only

Attacks and stone-pelting have continued due to the poor enforcement of curfew in Janipur area of the city, and in some highly sensitive parts, barely any police force has been deployed. 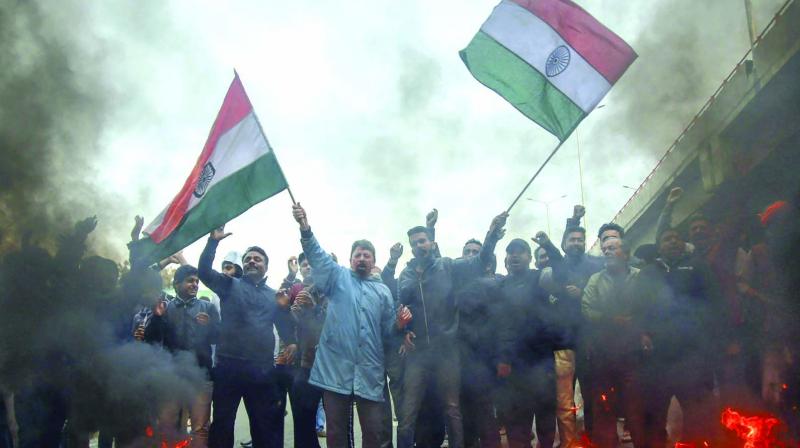 Protesters raise slogans and burn tyres during a demonstration in Jammu on Friday. Credit: PTI

Jammu: The curfew imposed on Friday to suppress mob-violence and arson is one confined to official documents and news reports. Due to poor enforcement, violent attacks continue in Janipur area between Kashmiri employees living in quarters and Jammu locals from a nearby colony.

Miscreants pelted stones at the quarters and attacked state secretariat employees (based in Jammu during the winter months) despite police officials being deployed there. The stone-pelting, including by local women, is still ongoing from both sides.

Protests erupted in Jammu city following the militant attack in Pulwama on February 14, which killed 49 Central Reserve Police Force troopers. Dozens of vehicles were set on fire and shops vandalised. A curfew was thus announced on February 15.

Most of Jammu has been free of public disruption and violence since the army was deployed on Friday. The old city, which witnessed mob violence and arson yesterday, has since been calm. Normalcy has returned to some extent to the neighbourhoods in Narwal, Channi Himmat and Sunjwan. But the indifference of the police towards enforcing the curfew may prompt these areas to revert to rioting.

Areas like Gujjar Nagar, Kharika Talav, Shaheedi Chowk – considered most sensitive because of their Muslim population – which had barely any police presence on Friday,  despite the curfew, saw the deployment of soldiers and policemen on Saturday

In Janipur, pre-existing tension and conflict between the colony of locals and Kashmiri government employees meant that the entire area should have been promptly sealed off and a strict curfew imposed. Sources say that five people, allegedly involved in stone-pelting in the area, have been jailed. But the police force and army, deployed in the area since Saturday morning, are yet to bring the situation under control. 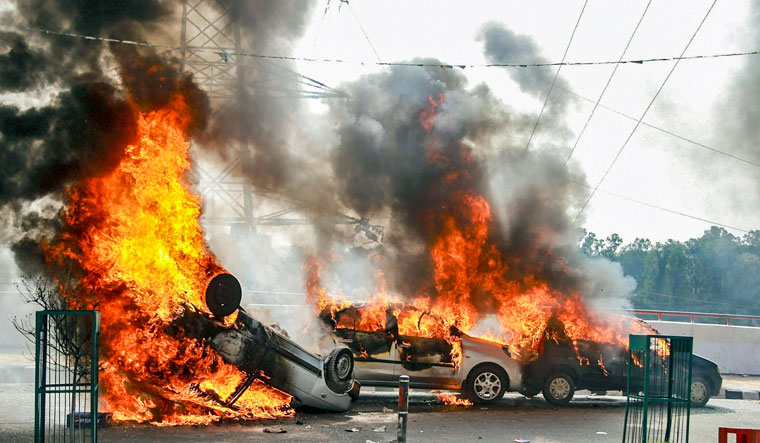 Jammu: Vehicles set on fire by protestors against the killing of CRPF personnel in the Pulwama attack. Credit: PTI

Instead, the administration is allowing cars, bikes and scooters to travel freely on the roads, despite setting up barbed wire to create an illusion of a curfew. Residents in the government quarters in Jammu have demanded security and threatened to return to Kashmir if no measures are taken.

Lower-rank police officers said on condition of anonymity that arsonists at work yesterday were mainly drunkards, drug abusers and hooligans paid to disturb the peace.

Krishnan Vijay Kumar, an advisor to governor Satya Pal Malik, was seen in Gujjar Nagar. “I have just come from Kashmir and I am trying to find out what happened here yesterday,” he said. He spent the entire day assessing the situation – despite this, it has not improved.

An assessment of the situation indicates that the administration is not serious about restoring communal harmony in Jammu. It has given a free hand to protesters and allowed the politicisation of protests, which could have further perilous consequences – including the alienation of Kashmiri police personnel.

An officer deployed for the curfew told The Wire that if the situation worsens, and the administration is seen as enabling it, police officers may abandon their duty and rebel.

Former DGP Masud Chowdhary said, “It is not like such situations have never taken place before, but previously, the administration took action and did not stand back with their hands tied.”

Advocate Sheikh Shakeel said at a press conference on Saturday: “What does it show when arsonists are burning down vehicles one after the other in areas where DC office is close by and the police station is close by and yet no one does anything to stop it.”