Leaders have urged the Centre to take immediate measures to help the bereaved families and bring them justice. 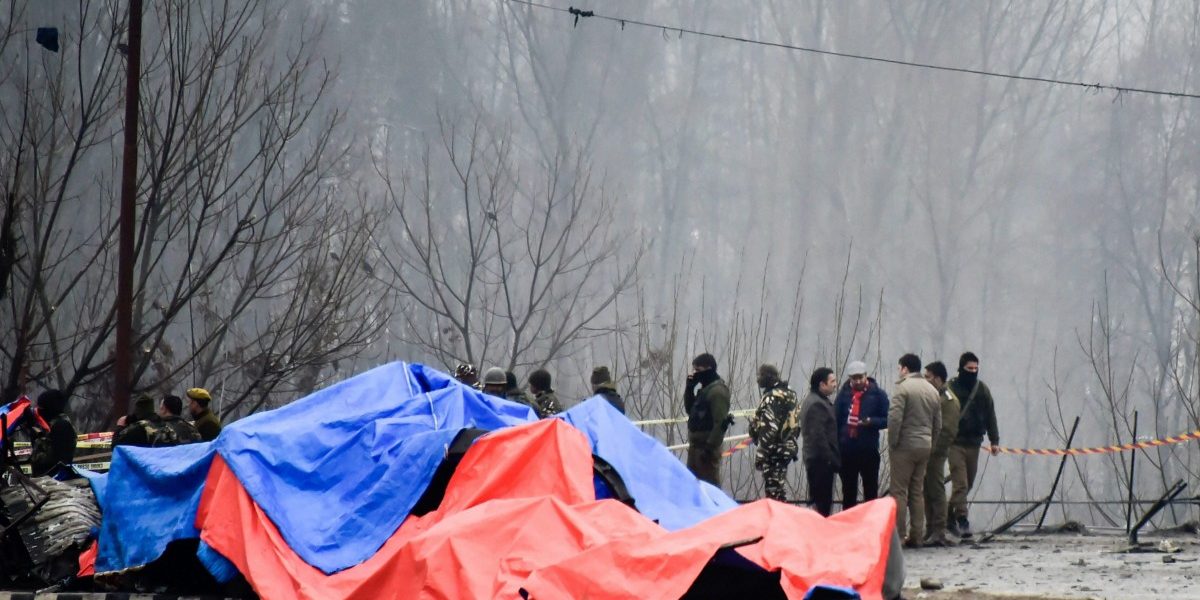 New Delhi: Indian political parties buried their differences for a day and stood firmly in support of the Central Reserve Police Force personnel who lost their lives in the militant attack in Kashmir’s Pulwama on February 14. Opposition parties urged the Centre to take immediate measures to help the bereaved families and bring them justice.

Addressing the press this morning, Congress president Rahul Gandhi said, “I will support the government and jawans in this difficult time.”

When asked political questions, Gandhi said, “I want to close this by saying the entire Congress party and most of the opposition in this difficult time stands with the jawans and the government. We are not going to get into any other conversation.”

Gandhi added that if those who were behind the violence think that they can divide people of India, then they are wrong. “No force, no amount of hatred or anger can do even this (gesturing with his thumb and forefinger joined) to the love and affection our country is built on,” he said.

Former Prime Minister Manmohan Singh, too, extended his support to the government, “Today is a day of mourning. Our country lost 40 jawans and our foremost duty is to convey to the families of those injured, we are with them in condemning this act of terrorism. Whatever the country requires, we will work as a united nation.”

Earlier in the day, Prime Minister Narendra Modi said at an event, “The terrorists…they have made a big mistake. You will have to pay a very heavy price…I assure everyone that the forces behind the attack…we will bring them to justice.”

Telangana chief minister and Telangana Rashtra Samithi chief K. Chandrasekhar Rao cancelled his birthday celebrations for February 17 and asked his party cadre to observe a day of mourning instead.

The Punjab assembly was also adjourned for the day. Chief minister Amarinder Singh termed the militant attack a “dastardly attack of Pakistan” and asked the Union government to give a befitting reply. “It is time to teach (them) a lesson. The Pakistan prime minister speaks peace and the general speaks war,” the Congress leader said. Singh had served in the army before entering politics.

Samajwadi Party’s president Akhilesh Yadav, too, paid his respects to the soldiers. However, he held the Union government responsible for compromising national security in its race to win elections.

Yadav also met the families of some of the soldiers who were killed on Friday. 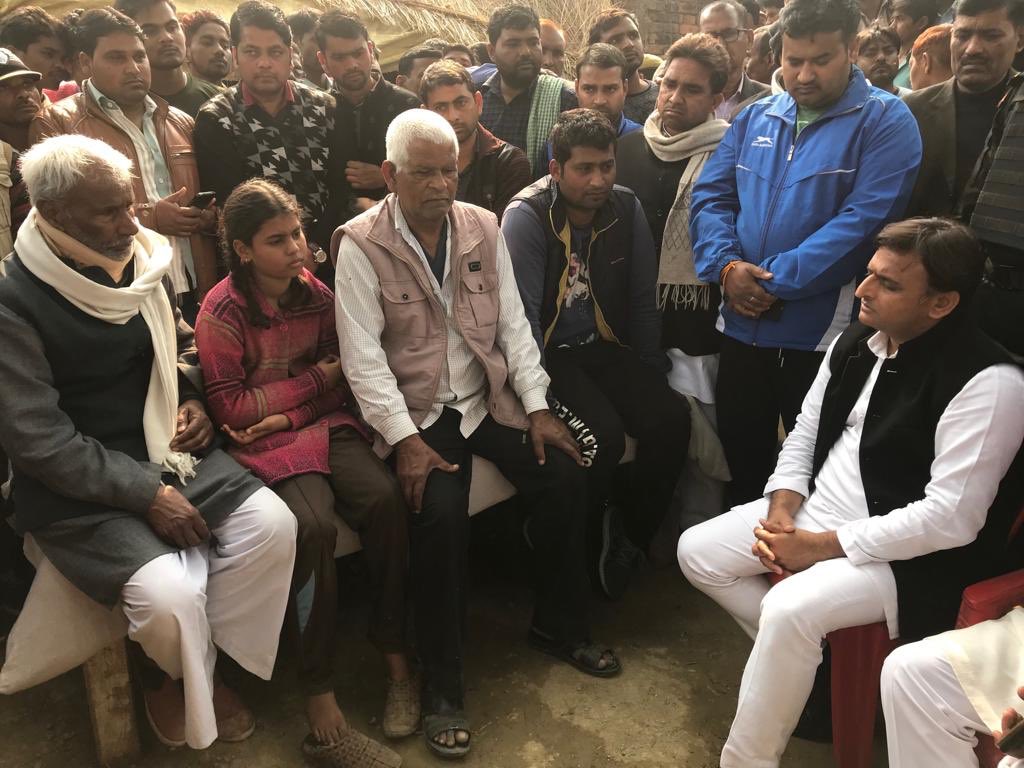 Bahujan Samaj Party chief Mayawati also tweeted to extend her support to the families of the killed CRPF personnel. Later the party released a press note asking the Union government to suspend its political activities and immediately attend to resolving the precarious situation in the Kashmir Valley. The party chief said that “the heart-wrenching incident in Pulwama” has sent the whole country into grief.

She also demanded that the families of the killed personnel be given adequate compensation and all the help possible. Mayawati said that by merely condemning the act, the Union government cannot absolve itself, and that it will have to effectively use the investigative agencies to catch the culprits. She appealed to the prime minister to find a lasting solution so that such acts are not repeated.

National Conference leader Omar Abdullah said that the incident should not be used to divide the country on religious lines.

Kashmiris/Muslims in Jammu didn’t attack our CRPF jawans yesterday, terrorists did. This violence is a convenient tool by some to shift the blame. Let’s unite against terror let’s not allow terror to divide us.

Heartbreaking images. One cant imagine their pain & helplessness. That last phone call will always be etched in their hearts. I hope regardless of political affiliations, we all can rise above the occasion & look for a peaceful & lasting solution. RIP https://t.co/FZFXt2grac

She also cautioned television channels not to inflame passions further.

At this time when passions are high, a section might support this deliberative & calculated pro war rhetoric that actually germinates in plush TV studios. But its the armed forces & innocent civilans that lose their lives. We musnt treat retailiation so casually.

She alleged that some miscreants in Jammu were taking advantage of the situation to spread hatred between Muslims and Hindus in the state.

Distressed to hear about miscreants in Jammu trying to take advantage of the situation by inciting tension. Guv adm should have preempted this by securing minority dominated areas. Have spoken to IG Jammu to deploy additional security.

It will be a travesty & against the spirit of our secular ethno-cultural values to use this terror attack as an excuse to target minorities. Hour of the need is to show compassion & come together.

Saddened that 13 CRPF jawans became martyrs today in Pulwama. We salute our brave jawans and extend our solidarity and condolences to their families. Our prayers for those injured. We wish them a speedy recovery

More news coming in that the death toll of CRPF jawans at Pulwama has now risen. We condemn this violence. Thoughts and prayers with the grieving families of our brave martyrs

Rashtriya Janata Dal leader Tejashwi Yadav demanded that the government formulate a policy to give martyred soldiers special benefits that befit their sacrifice.

Communist Party of India (Marxist) general secretary Sitaram Yechury also strongly condemned the violence. While extending “heartfelt condolences” to the bereaved families, the party said in a note, “Violence is not the answer to resolve issues which require the engagement of all stakeholders in the state.  The Modi government had promised, three years ago, to initiate a political process involving all stakeholders through a dialogue. This has not happened. This must be done immediately.”

The Leftist party urged the Central government “to ensure that peace and normalcy prevails in the state”.

Terming the incident as a “horrific terror attack,” the Communist Party of India, too, said in a press note, “We urge upon the authorities to look at the intelligence and security lapses self-critically. Considering the deterioration in the situation of Jammu and Kashmir, the Party reiterates its demand that the Union government should realize that the Jammu and Kashmir problem is a political problem which needs a political solution for which there should be a political process to reach out to all stakeholders through a meaningful dialogue.”

Soon after the attack on Thursday, opposition leaders Randeep Singh Surjewala and Abhishek Manu Singhvi, while condemning the violence and mourning for the killed soldiers, raised questions about the efficacy of the intelligence agencies under the Modi government.

This had prompted BJP president Amit Shah to say, “These are times when we all must come together and strengthen our resolve to make India stronger and safer.I appeal to the political class – let us rise above politics and show that we are together when it comes to matters of national security. Nothing matters above India.”

Responding to the questions posed by some opposition leaders, Modi said this morning, “Although  I understand the sentiment of those criticising us, I want to urge them, it is an emotional time, stay away from political one-upmanship.”

Most opposition leaders have made it clear that although these questions are bound to be asked, they are together in supporting the government in its efforts to curb terrorism in the country.

All political parties are meeting tomorrow morning in the parliament library to discuss further strategies to handle the security crisis.