Two killings in 24 hours underscore the deteriorating security climate in Kashmir where more than three dozen civilians, including political workers, have been gunned down this year. 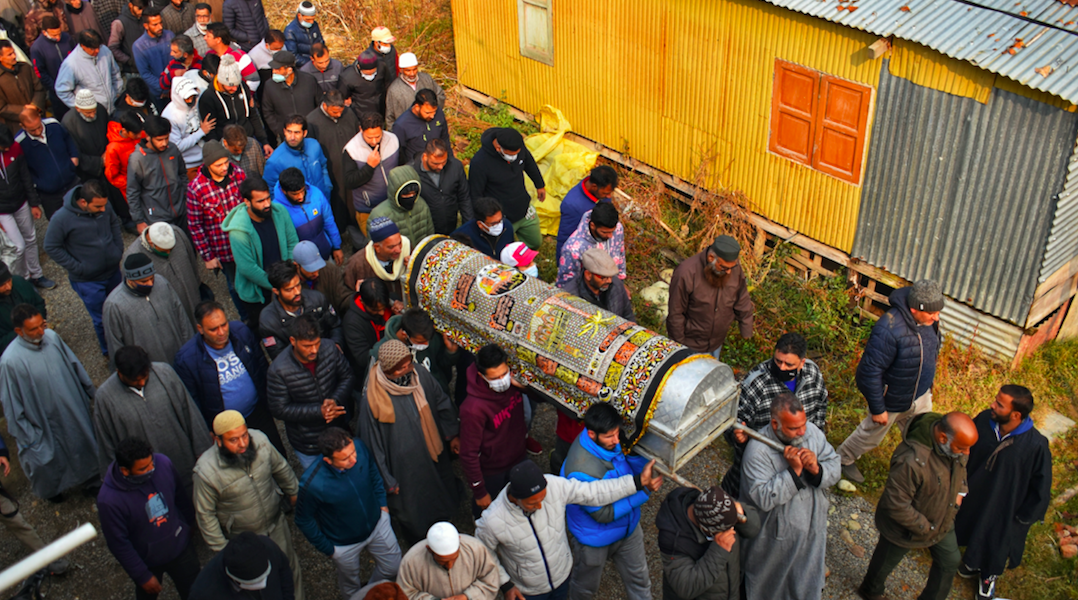 Srinagar: Suspected militants gunned down a civilian in Jammu and Kashmir’s capital Srinagar on the evening of Monday, November 8, within 24 hours of a J&K Police constable being killed in a similar attack in the city.

Ibrahim was working as a salesman at Nand Lal Mawa Enterprises, a prominent grocery shop owned by Dr Sandeep Mawa, a Kashmiri Pandit. A doctor by education and a political activist, Mawa is married to a Kashmiri Muslim woman. He returned to Kashmir in 2019, ahead of the scrapping of J&K’s special status. His father had been previously targeted by militants.

Bashir Ahmad, Ibrahim’s cousin, told The Wire that Mawa is the brother-in-law of prominent Kashmiri Pandit Makhan Lal Bindroo who was gunned down by militants outside his shop in Srinagar last month, sparking fear among minority communities across the Valley.

Following Bindroo’s killing, Bashir said Mawa had been provided security cover by the government and had stopped going to his shop. Sources said he has shifted to Jammu on the advise of his family.

“Ibrahim was running the shop and it is possible that he was killed by mistake and that Sandeep was the real target,” he said.

Eyewitnesses told The Wire that the victim was attacked when he had boarded a private vehicle, a white Mahindra XUV, after ending his day at the shop. This vehicle is owned by Mawa.

“I heard gunshots when I was closing the shop. Since it was dark, I couldn’t see what had happened. When I went closer, I saw that Ibrahim had been shot in the car,” said Javed Ahmad, who works as an accountant at the shop.

According to a J&K police statement, Srinagar Police received information about the shooting at around 8.10 pm, following which senior police officers reached the spot.

“In this terror incident, he had sustained critical gunshot injuries and was immediately shifted to nearby hospital for the treatment where he succumbed to his injuries. Police has registered a case in this regard under relevant sections of law. Investigation is in progress and officers continue to work to establish the circumstances which lead to this terror crime,” the statement added. Ibrahim is survived by his wife Romana Gul, who is the only child of her parents, one of whom is dead, and his two minor children. “They had come to kill the Pandit but they killed Ibrahim instead. What will she (Romana) do now? She is herself an orphan. How will she run the family?” said Zahida, a relative of Ibrahim’s.

“If they had come to kill the Pandit, why was Ibrahim targeted? He was innocent. People are being killed (in Kashmir) for no reason. We want justice for his two minor kids,” said another woman relative at the residence of Ibrahim who could not be identified immediately.

J&K Lieutenant Governor Manoj Singh’s office tweeted that he was “deeply anguished to learn about barbaric killing” in Srinagar.

Deeply anguished to learn about barbaric killing of Mohd Ibrahim Khan by terrorists. I strongly condemn this cowardly act. A befitting reply will be given to the terrorists and their patrons. My deepest condolences to the bereaved family in this time of grief.

The dastardly killing of Ibrahim is reprehensible & I unreservedly condemn it. Unfortunately Ibrahim is the latest in a series of targeted killings in the valley, especially Srinagar. May Allah grant him place in Jannat. https://t.co/ENuuRTLXgP

Former chief minister and PDP chief Mehbooba Mufti was also vocal about the killing on Twitter.

Security situation in J&K has deteriorated to an extent where not a week goes by when an innocent doesn’t lose his life.Unfortunate that despite repressive measures taken in name of security, people are being killed & have no sense of dignity or normalcy.Condolences to his family https://t.co/hZIhM2pHua

The body of the victim was handed to his relatives in the early hours of Tuesday. The killing of Ibrahim took place less than 24 hours after a J&K Police constable, Tawseef Ahmad Wani, who was off duty, was shot dead by militant outside his home in Srinagar’s Batamaloo locality. The constable is also survived by his wife and two minor children.

The back-to-back killings in Srinagar highlight the precarious security situation in Kashmir which was rattled by militant violence last month in which at least dozen civilians were killed by militants. Two civilians were also shot dead by the Central Reserve Paramilitary Force troopers (CRPF).

The spate of civilian killings had last month revived the memories of early 1990, when Kashmir Pandits, a minority community of Hindus, were forced to migrate out of the Valley after the eruption of armed insurgency.

The attack on Bindroo, the Kashmiri Pandit chemist, was followed by the targeted killings of a female Sikh principal, Supinder Kour, and a teacher of a government-run school in Srinagar’s Eidgah locality, forcing non-local workers and migrant Kashmiri Pandit employees to flee the Valley.

The BJP-led Union government, which has been claiming that militancy has come to an end in J&K following the reading down of Article 370, had decided to take fresh measures to put an end to the targeted killings of members of Kashmir’s minority communities and migrant workers. Most of these killings have been claimed by The Resistance Front.

Following a security review meeting chaired by the Union home minister Amit Shah in Srinagar last month, the Union government is deploying 75 additional battalions of CRPF and Border Security Forces in the Valley to prevent attacks on minority communities and migrant workers.

Some 30 companies of the additional forces are being deployed in Srinagar city alone and many of them have taken over the government’s community facilitation centres, leading to anger among locals.

After the home minister’s visit, the J&K administration had also announced that it will set up State Investigations Agency to probe militancy-related cases and prosecute the offenders – a move widely believed to be an admission of the failure of the Centre’s J&K policy following the reading down of Article 370.

Last month, the National Investigations Agency had also filed a case in connection with the civilian killings in Kashmir and at least 25 persons, including a young photojournalist, Mohammad Manan, and a woman, have been arrested in the case so far.

However, the twin killings in Srinagar, which police believe have been carried out by militants’ overground workers who do not have any record in the official books, underscore the deteriorating security climate in Kashmir where more than three dozen civilians, including political workers, have been gunned down this year.

Note: This article, originally published at 9.48 am on November 9, 2021, was republished at 11.00 am on the same day as a Srinagar report with quotes from eyewitnesses.